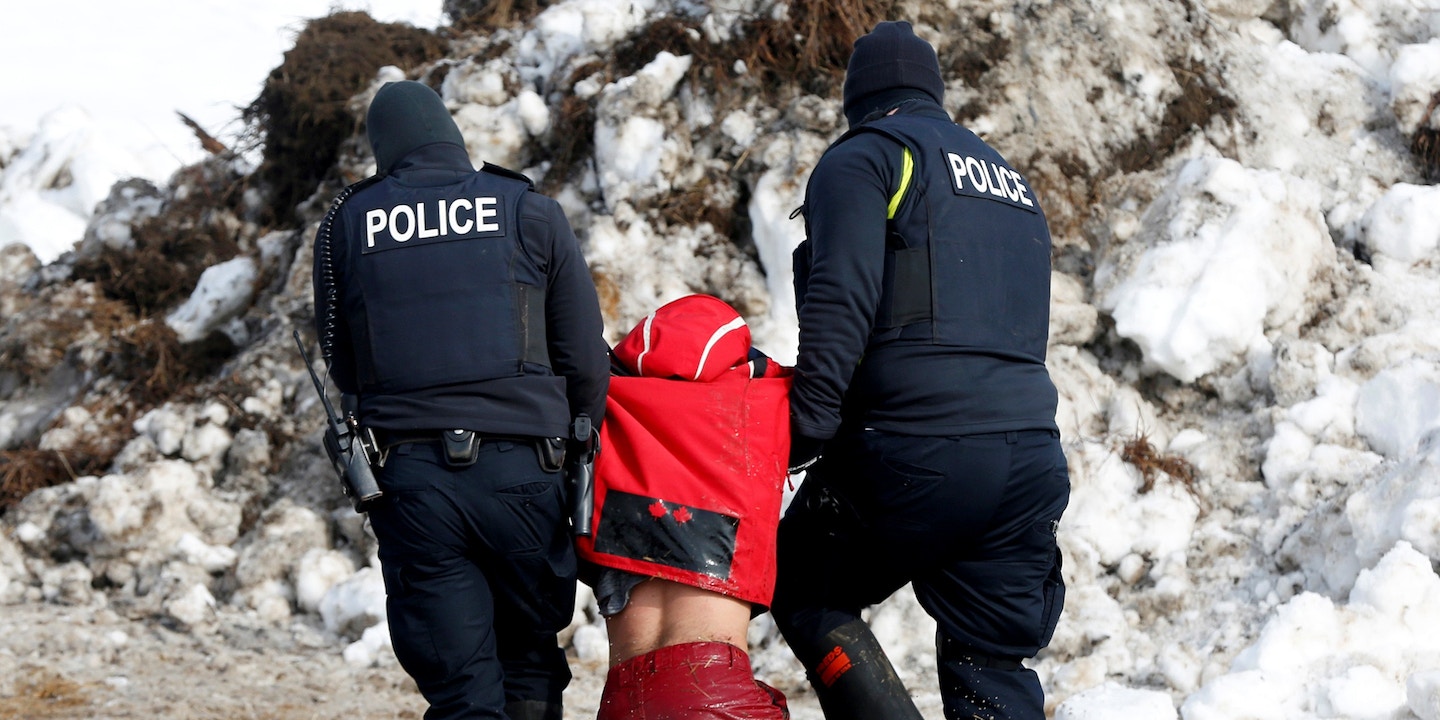 North Dakota lawmakers are considering a bill to restrict the release of records related to security operations involving “critical infrastructure” — a category that includes fossil fuel pipelines. The bill comes after The Intercept and other media outlets published stories documenting law enforcement surveillance and coordination with private security during the Dakota Access pipeline protests, many of which were based on records released under the North Dakota Open Records Act.

According to Jesse Franzblau, a transparency law expert and policy analyst at Open the Government, while some of the language in the bill is similar to exemptions in federal laws that restrict public access to critical infrastructure information, “several parts of the bill obviously seem very tailored toward pipeline-related construction and also, given the timing, toward keeping information on security operations against pipeline protesters a secret.”

On January 22, the 47-member North Dakota Senate voted unanimously in favor of the bill. If approved by the state’s House of Representatives, it will head to Gov. Doug Burgum’s desk.

Proponents of the bill claim it is necessary to prevent cybersecurity attacks and other dangerous intrusions. “Whether it’s utilities or whether it’s any kind of other industry that we have, all of those are ripe for cyberattacks and that information needs to be secure,” Democratic Sen. Joan Heckaman, one of the bill’s co-sponsors, stated at a January 21 hearing.

Chip Gibbons, policy and legislative counsel at the group Defending Rights & Dissent, says the cybersecurity justification appears to be a smokescreen, particularly since hackers are unlikely to rely on freedom of information requests to carry out attacks. “To me, it just seems like a silly distraction,” Gibbons said. “Instead of having a conversation about protecting the public right to know about law enforcement responses to protests, such as collaboration with private security firms paid for by the pipeline companies, it focuses the conversation on something more people can agree on.”

Neither Heckaman nor Republican Sen. Jerry Klein, another co-sponsor of the bill, responded to requests to clarify its intent. Todd Kranda, a lobbyist for the bill, left a voicemail with The Intercept saying that Klein had passed on the comment request to him. Subsequent calls and emails to Kranda went unanswered.

During the January 21 hearing, Kranda testified in support of the bill on behalf of Missouri River Energy Services, a utility provider in four Upper Midwest states. Records from the North Dakota secretary of state show that Kranda is also a registered lobbyist for the North Dakota Petroleum Council and various fossil fuel companies, including the Keystone XL pipeline builder TransCanada. In 2017, Kranda was registered as a lobbyist for Alliance Pipeline, which recently announced a major expansion in North Dakota.

The struggle against the Dakota Access pipeline galvanized a global movement, but it also led to intensive police monitoring, violent suppression of protests, and the prolonged prosecution of hundreds of activists. The overwhelming majority of charges brought against pipeline opponents were eventually dismissed due to lack of evidence. In numerous cases, lawyers and activists drew on documents that media outlets obtained via open records requests to defend those under prosecution.

“I think this is clearly a response to what you learned through freedom of information requests,” Jeffrey Haas, a civil rights attorney and member of the Water Protector Legal Collective, told me. “They did not like to have to disclose that information. This is an effort to prevent that in the future.”

Behind the scenes, law enforcement officers responded to the records requests with consternation. An April 2017 intelligence bulletin co-authored by the North Dakota State and Local Intelligence Center, which I obtained via a records request, bemoaned the independent media group Unicorn Riot’s use of the state’s public records law to pry out information on police activities.

I also obtained an internal law enforcement email exchange concerning an open records request I had filed with the city of Bismarck seeking information on intrusive surveillance of protesters. “The individual making the request was William Parrish out of California who claims to be a ‘journalist,’” Bismarck Police Lt. Lynn Wanner wrote in a May 2017 email to officials with the FBI, Bureau of Indian Affairs, U.S. Attorney’s Office, and North Dakota Bureau of Criminal Investigation. “I don’t have much information on him.”

BIA analyst Barry Cossey noted that he had consulted with an attorney about preventing the release of records I requested. “Is there a preemptive way to prevent the city of Bismarck from disclosing any law enforcement product produced by BIA personnel?” Cossey asked. An FBI agent chimed in by passing along information from the FBI’s Minneapolis associate division counsel, who asserted that the “FBI should be consulted on any emails touching on FBI equities” prior to the release of any documents.

Wanner also expressed frustration about North Dakota’s relatively strong open records law. “I’m still doing some checking on the legality of everything and what I am forced to release,” she wrote. Email from Bureau of Indian Affairs analyst Barry Cossey on May 3, 2017.

The bill to amend the open records law comes as more than a dozen states have introduced or passed bills criminalizing protest related to fossil fuel infrastructure projects. Those bills are similar to a model created by the American Legislative Exchange Council, a national network that brings together corporations and right-wing legislators to draft industry-friendly policies.

A North Dakota version of ALEC’s model, introduced nine days prior to Senate Bill 2209, is among the harshest. It would make it a felony to trespass on a critical infrastructure site such as a pipeline construction right of way, and would assess a hefty fine on any organization “found to be a conspirator with an individual” who violates the law.

Gibbons says the effort to restrict access to records like those that shed light on the police response to the DAPL protests is particularly worrisome given law enforcement’s ongoing pattern of using excessive force against opponents of new fossil fuel development and infringing on their First Amendment rights.

“One of the great tools we have for fighting back against those kinds of abuses is the Freedom of Information Act and state-level public records laws, because that way we can find out what actually happened,” Gibbons said. “If we have a vague suspicion of something but can’t actually prove it, we can’t fight back against it.”