Meanwhile, in Illinois, Food & Water Watch has demanded a state attorney general investigation into the firm’s infiltration of activist groups. TigerSwan, the private company behind a monthslong, multi-state surveillance operation targeting opponents of the Dakota Access Pipeline, illegally provided security and investigative services to the pipeline’s parent company, Energy Transfer Partners, despite being denied a license to do so, a new civil lawsuit alleges. Even after oil began to flow through the contested pipeline, and long after the crowded Dakota Access resistance camps gave way once again to empty prairie, TigerSwan continued its unlicensed security operations in North Dakota.

The allegations are part of a lawsuit the North Dakota Private Investigation and Security Board filed against TigerSwan and its founder James Reese on Tuesday. Violating the license law is a class B misdemeanor in North Dakota, though local prosecutors have not filed criminal charges.

The complaint against TigerSwan requests an injunction against the firm and its founder, which would prevent them from continuing to illegally operate as a security company in the state. At the time of the lawsuit, TigerSwan continued to deploy personnel “armed with semiautomatic rifles and sidearms” in North Dakota and was still monitoring “persons affiliated with the DAPL protests,” according to the court filing.

Two weeks prior to the initiation of the suit, The Intercept published a selection of more than 100 leaked situation reports prepared by TigerSwan for its client ETP, as well as additional documents obtained via public records request detailing the scale of TigerSwan’s security operation and its close collaboration with law enforcement. Communications to the security board obtained via public records requests show that as late as December, Reese, a former Army Delta Force commander, declared that TigerSwan was only “doing management and IT consulting for our client and doing no security work.” But internal company reports as well as an overview of TigerSwan’s operations that was shared with law enforcement show the company had been doing much more than that since September. Both sets of documents were included in the lawsuit.

The complaint describes invasive tactics used by TigerSwan, including “flyover photography,” “surveillance of social media accounts,” placing or attempting to place “undercover private security agents within the protest group,” and coordination with local law enforcement officials. The security operations overview obtained by The Intercept and cited in the suit states plainly, “All elements are engaged to provide security support to DAPL.”

According to the suit, the security board first notified TigerSwan on September 23 that it was illegally providing security services without a license. The company responded on October 4, stating, “TigerSwan is not conducting ‘private security services’ in North Dakota.” The company simultaneously submitted an application for a license “should such services, which are not present at the time, be required from TigerSwan.” On December 19, the board notified Reese that it intended to deny his application for a license, citing “positive criminal history for one or more disqualifying offenses,” as well as failure to disclose all arrests and failure to provide sufficient information “for the Board to determine whether a reported offense or adjudication has a direct bearing on Reese’s fitness to serve the public.” Reese’s record shows numerous citations in various states, including several for traffic violations such as reckless driving and speeding, and an arrest for “assault on a female” in 2015, flagged as a domestic violence case and later dismissed. Reese’s wife, Niki, filed a restraining order against him in Florida in 2012, public records show.

On December 27, Reese requested an administrative review of the license denial. “I have never been convicted of any criminal crime in my life,” he wrote to the board. “If I failed to disclose on the application all arrests, this was an oversight by me and my apologies.” Reese went on to describe an incident leading to the assault charge, from July 2015, claiming that his “bipolar” wife had become “belligerent” during a “depression act” and called police on him. Reese also requested a copy of the criminal record reviewed by the board.

Reached by phone, Niki Reese categorically denied ever having been diagnosed with a mental health condition and refuted her husband’s account of the episode in the letter to the board.

“It’s false information. I don’t have any kind of diagnosis,” she told The Intercept. “His allegations that he wrote are completely false.”

The board denied James Reese’s application on January 6. Reached by phone, Reese asked The Intercept not to publish his letter to the board. “Why would you take a private letter like that and send it out to everybody in the world?” he asked. “I’d ask you to leave my family out of this.”

When reminded that he included the allegations about his wife in a letter to a public licensing board, making it part of the public record, he replied, “That was my mistake.”

Reese also claimed there were inaccuracies in a series of stories on TigerSwan reported by The Intercept. “I can’t even begin to start here which facts are wrong,” he said. The only example he pointed to was the investigation board’s allegation that TigerSwan staff were armed — an allegation that the Intercept has not actually made.

TigerSwan did not respond to a request for comment. A spokesperson for Energy Transfer Partners declined to comment, referring questions to TigerSwan and the security board. Keegan Pieper, a counsel for ETP, wrote in an email to The Intercept that he was “not aware of this lawsuit.” 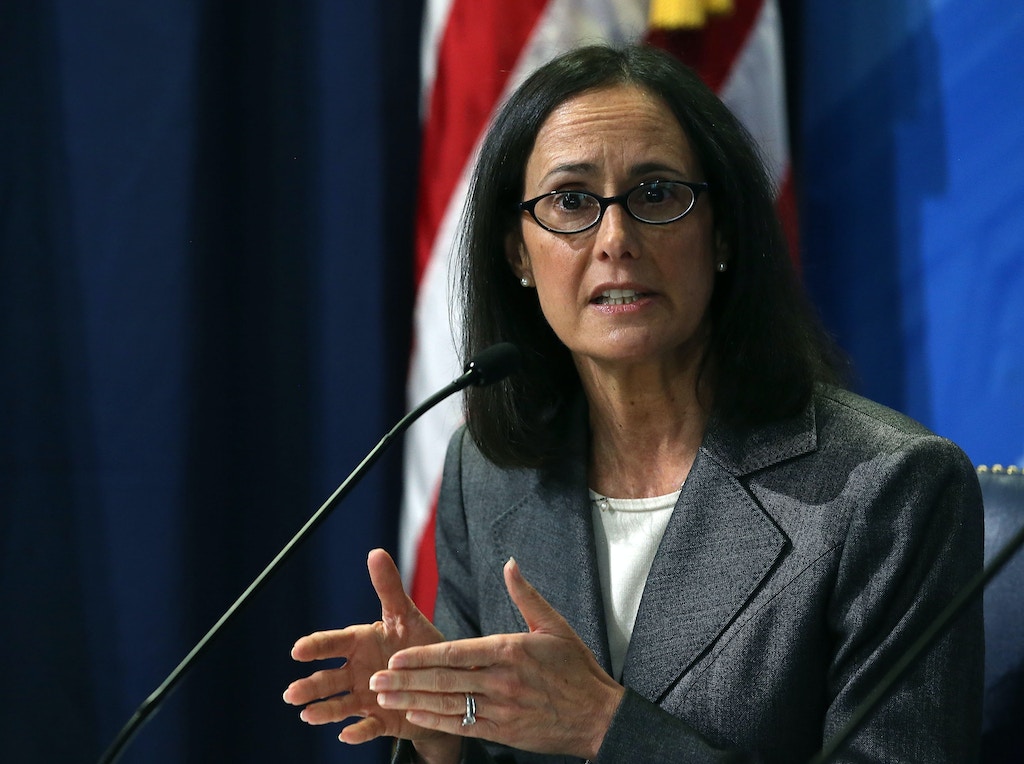 Illinois Attorney General Lisa Madigan at a news conference at the Federal Trade Commission headquarters in Washington, D.C., on Nov. 4, 2015.

TigerSwan is also facing pressure in Illinois, where the environmental group Food & Water Watch is demanding that the state’s attorney general, Lisa Madigan, launch an investigation into the company’s activities after The Intercept revealed that TigerSwan had infiltrated local activist groups, including some that had little to do with the Dakota Access fight. Food & Water Watch, which worked to highlight the financial interests behind the pipeline, was mentioned repeatedly in the leaked reports.

“We strongly believe that TigerSwan engaged in illegal surveillance activities against me and other employees and supporters of Food & Water Watch (FWW) in a manner that is violates [sic] our state constitutional and statutory rights, including our rights of privacy,” Jessica Fujan, the group’s Midwest director, wrote in the letter. “We now have reason to believe that these infiltrators were recording our conversations, photographing participants and FWW staff and perhaps making videos of our meetings.”

The attorney general’s office did not respond to a request for comment. Fujan said that the group had been tipped off about the presence of an undercover agent and that “paid infiltrators are easy enough to detect, but create distraction and even fear among volunteer activists.”

“Hundreds of leaders, many of them volunteers, are working long hours on outstanding campaigns, well within the letter of the law, and winning victories for the environment,” she wrote in an email to The Intercept. “These leaders are owed our constitutional right to privacy, at the very least.” Private security guards allow attack dogs to lunge at a protesters arriving to stop the bulldozing of land for the Dakota Access Pipeline, near Cannon Ball, N.D., on Sept. 3, 2016.

Back in North Dakota, TigerSwan is just one of several security companies hired to monitor the Dakota Access Pipeline that have been targeted by the North Dakota Private Investigation and Security Board for failing to obtain licenses.

In February, the board launched an administrative action against EH Investigations and its head Jeremie Meisel, threatening to revoke or suspend the company’s license. The board alleged that EH conspired with another company, Leighton Security Services, to hire and deploy unlicensed or unregistered Leighton personnel to provide private investigative services for DAPL in the state. Meisel, EH, and Leighton did not respond to requests for comment.

The board also launched an investigation last fall into the reportedly unlicensed company Frost Kennels after personnel sicced dogs on pipeline opponents who were attempting to stop workers from disturbing land that the area tribe had identified as burial grounds. The board’s lawyer, Monte Rogneby, told The Intercept that the Frost Kennels case “is still ongoing.” Frost Kennels did not respond to a request for comment. Rogneby declined to comment on whether the board is investigating any of at least six other security companies that worked on the pipeline.

In its administrative complaint against EH Investigations, the security board stated that Leighton Security Services employed “a project manager, two deputy project managers, three intel analysts, and three evidence technicians,” none of whom “were properly licensed or registered to provide private security services in North Dakota.” EH allegedly conspired to facilitate the unlicensed work. Administrative complaints are decided by the board itself rather than a court, and the board’s lawyer said the matter is ongoing.

A yearlong investigation into the national landscape of private security licensure in December 2014 by the Center for Investigative Reporting and CNN described “a haphazard system of lax laws, minimal oversight and almost no accountability.”

Kevin Ingram, president of the International Association of Security and Investigative Regulators, noted in an email to The Intercept that “Several states have no regulation at all. Among those that do, it could be the company or the individual or both that require licensure, and the criteria could be vastly different for armed or unarmed security.”

Yet the industry continues to grow. According to a 2014 report by Frost & Sullivan, a marketing research and consulting company, the oil and gas industry spent $19.6 billion globally on infrastructure security in 2013 and was expected to reach nearly $25 billion by 2021.

Simultaneously, law enforcement agencies have established an unprecedented range of formal collaborations with oil and gas corporations in the name of preventing threats to so-called “critical infrastructure,” which in the parlance of national security agencies refers to installations that are important to the domestic economy — a category that includes oil pipelines that have yet to be fully permitted.

“Environmental campaigns are always difficult, given that our opponents are global profiteers like Big Oil & Gas,” wrote Fujan, of Food & Water Watch. “I take our infiltration as a clear sign that polluters in the energy industry know they’re losing public opinion, and the fight for the future of energy.”

To search all TigerSwan documents published by The Intercept, go to the TigerSwan project page on DocumentCloud.

Top photo: People gather at an encampment to join the Standing Rock Sioux Tribe’s protest against the construction of the Dakota Access Pipe (DAPL), near Cannon Ball, N.D. on Sept. 3, 2016.