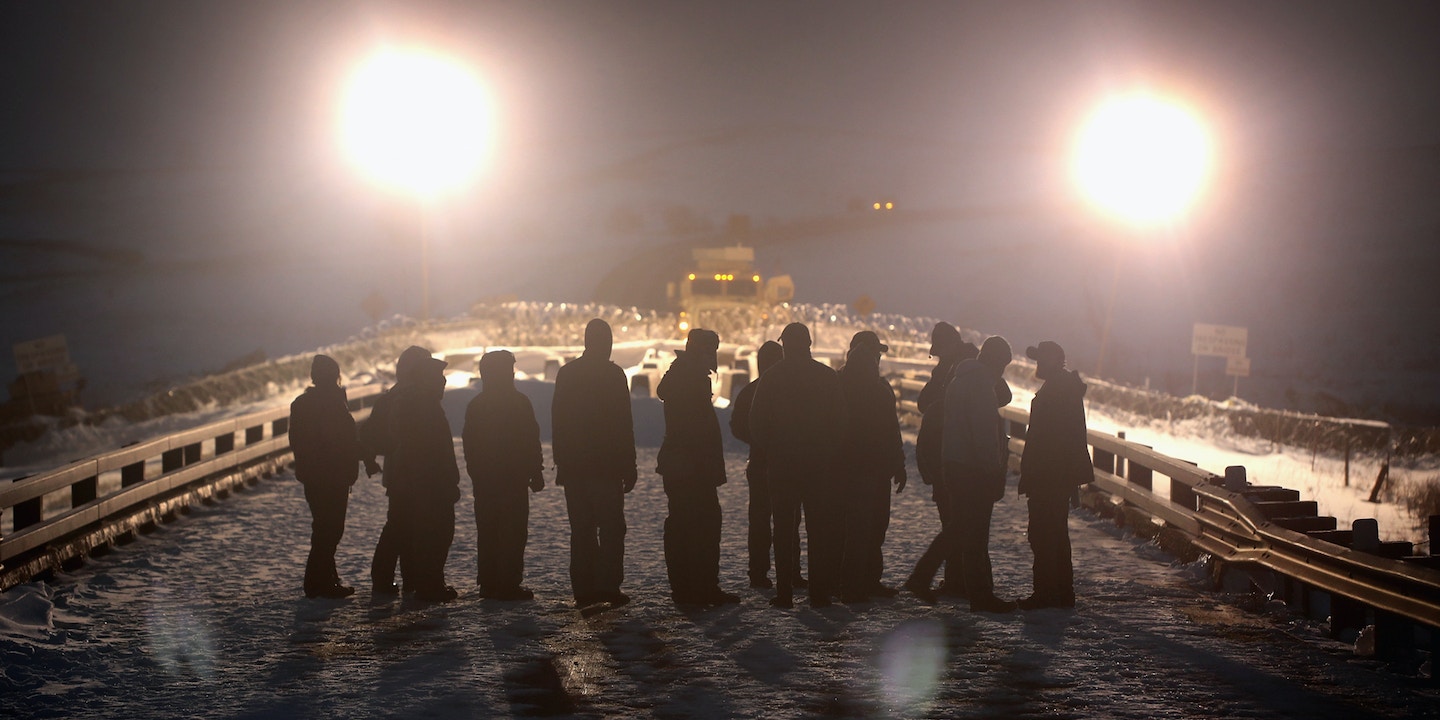 Last week, a North Dakota court ruled against a bid by the oil company Energy Transfer to keep documents about its security contractor’s operations against anti-pipeline activism secret. The court thwarted the pipeline giant’s attempt to narrow the definition of a public record and withhold thousands of documents from the press. Judge Cynthia Feland ruled that Energy Transfer’s contract with the security firm TigerSwan cannot prevent the state’s private security licensing board from sharing these records with The Intercept, refusing to accept the company’s attempt to exempt the records from open government laws.

“This is the first opinion that I’ve been aware of that’s made it clear that when you give records to a public entity like this private investigation board, they become public records,” said Jack McDonald, attorney for the North Dakota Newspaper Association. “What relationship there was between Energy Transfer and TigerSwan — that doesn’t affect the records.”

The North Dakota case revolves around 16,000 documents that an administrative law judge forced TigerSwan to hand over to the state’s Private Investigation and Security Board in the summer of 2020 as part of discovery in a lawsuit accusing the company of operating without a security license. TigerSwan was hired by Energy Transfer in September 2016 to lead its security response to the Indigenous-led movement to stop construction of the Dakota Access pipeline, or DAPL, at the edge of the Standing Rock Sioux Reservation.

A portion of the discovery documents were already made public in court filings. The documents provided unprecedented detail about the security firm’s activities against members of the anti-pipeline movement, known as water protectors, and raised questions about whether public officials’ responses to Energy Transfer’s activities were appropriate.

In October 2020, I made a public records request under the aegis of The Intercept for the full set of documents that gave rise to the court case. This week, Energy Transfer attorneys said they plan to appeal the latest ruling and requested a stay to prevent the North Dakota security board from releasing the material.

Led by a former commander of the elite Army unit Delta Force, TigerSwan approached the water protectors as “an ideologically driven insurgency with a strong religious component,” according to internal documents leaked to The Intercept. Company tactics — including aerial surveillance, communications monitoring, infiltration of activist circles, and coordination with law enforcement agencies — were revealed by The Intercept in an investigative series. In one of the discovery documents that has already been released, TigerSwan bluntly said that its “counterinsurgency approach to the problem set is to identify and break down the activist network.”

Kasowitz Benson Torres represented Energy Transfer in a federal suit accusing Greenpeace and others of launching the Standing Rock movement through a misinformation campaign and of violating the Racketeer Influenced and Corrupt Organizations Act, or RICO, which was designed to take down the mob. The suit against Greenpeace was dismissed by a federal judge, who said that its RICO interpretation was “dangerously broad.” (Energy Transfer and Kasowitz Benson Torres declined to comment for this story.)

“The dehumanization, demonization, and lawfare tactics used against water protectors from Standing Rock and Line 3” — another contested pipeline — “to front lines across the world are bankrolled by private fossil fuel corporations with endlessly deep pockets,” said Natali Segovia, legal director of the Water Protector Legal Collective, which represents opponents of the Dakota Access pipeline and other polluting projects. “These documents are crucial to understanding just how far those tactics run and the extent of the harm they have already caused to those that were at Standing Rock.”

Shortly after TigerSwan handed over its documents to the North Dakota Private Investigation and Security Board, Energy Transfer began fighting to get them back, including by suing the board itself. The fight continued after TigerSwan and the board agreed to a settlement in the licensing dispute, in which TigerSwan affirmed that it would not operate in the state and would pay $175,000 but admitted no fault.

Energy Transfer argued that the documents don’t count as public records because, it claimed, TigerSwan had inadvertently supplied material that went beyond the discovery request, violating its contract with Energy Transfer. TigerSwan agreed in court filings that the material should be returned and kept from release.

Feland, the judge, dismissed the claim and others, affirming that Energy Transfer’s contract with TigerSwan does not override North Dakota’s open records laws.

Although the ruling only directly applies to a handful of North Dakota counties, it could have consequences beyond the region. “State law rulings can really spread,” said Victoria Noble, a First Amendment fellow at The Intercept and one of the lawyers representing the news outlet in court. “If Energy Transfer had prevailed here, that would have given a blueprint both for Energy Transfer and for other companies to make the same arguments in other states, in other cases.”

The ruling does not mean that the North Dakota board will immediately hand over the documents, in part because the judge did not rule on whether a public records law exemption asserted by the security board applies. Energy Transfer’s appeal and request for a stay are likely to halt any potential release for the time being.

Separately, the company is still fighting in North Dakota’s Supreme Court to intervene in the security board’s now-settled administrative case against TigerSwan, aiming to get the administrative law judge to issue a protective order forcing the board to withhold the documents.

In an amicus brief, news organizations characterized Energy Transfer and Kasowitz Benson Torres’s arguments to the Supreme Court as “abusive litigation tactics.” The signatories — the North Dakota Newspaper Association; HPR LLC, which publishes Fargo’s High Plains Reader; and First Look Institute, The Intercept’s parent company — said that allowing Energy Transfer to make arguments similar to those already presented in district court again to an administrative law judge would be “duplicative litigation” and would “seriously impair the rights of the press and public under the Open Records Act” because of the high expense of fighting the Fortune 500 company in multiple venues.

The aggressive approach is nothing new for Energy Transfer. In 2019, when Energy Transfer’s RICO suit against Greenpeace was dismissed, its Kasowitz Benson Torres attorneys filed a new version of the suit in a North Dakota state court within a week; that case is ongoing. Last spring, the attorneys filed wide-ranging subpoenas against individuals and groups associated with the Standing Rock movement — including press. Among the subpoenas was one demanding that the nonprofit news organization Unicorn Riot turn over audio, communications, and article drafts related to Standing Rock reporting.