The company notorious for surveilling pipeline opponents at Standing Rock was pursuing a contract to guard Louisiana’s Bayou Bridge pipeline. 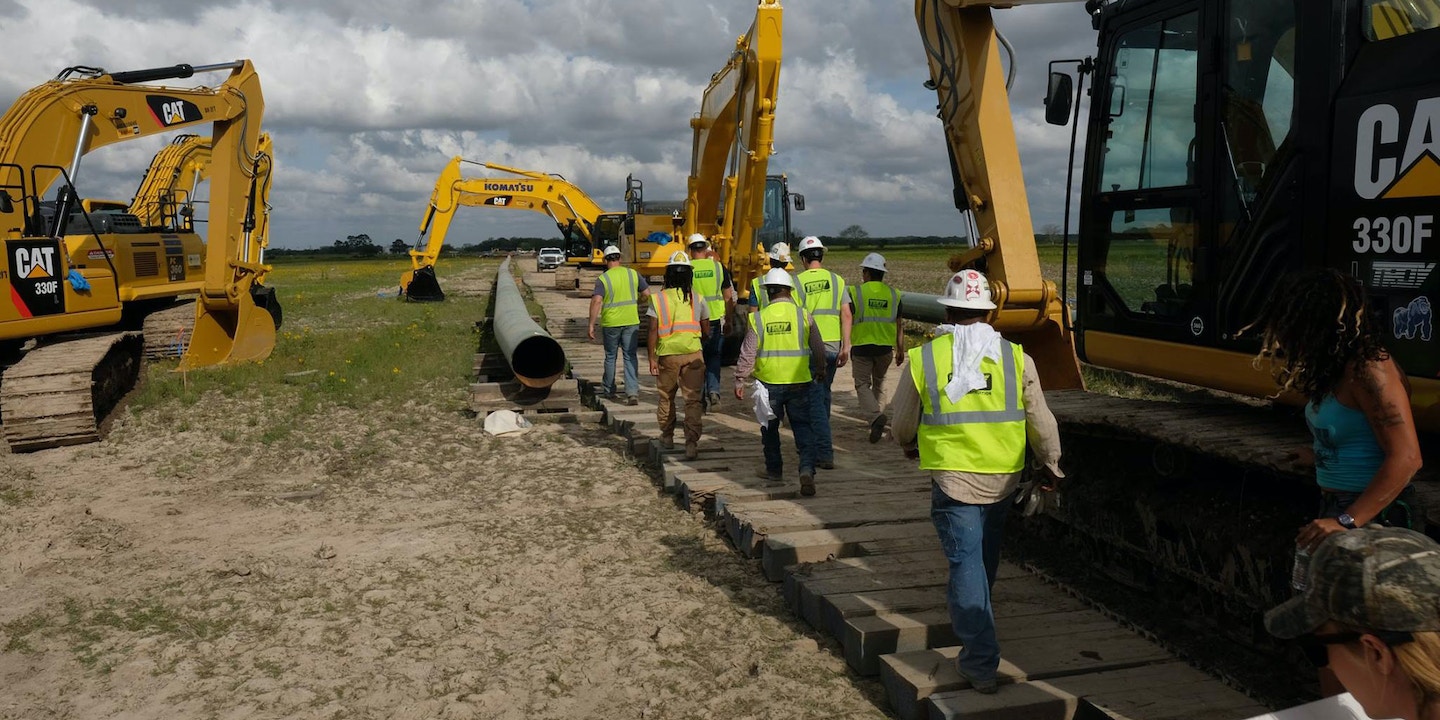 TigerSwan, the private security company notorious for its work surveilling pipeline opponents at Standing Rock on behalf of Energy Transfer Partners, hit a roadblock last July in its effort to provide intelligence and security services in Louisiana. The Louisiana State Board of Private Security Examiners determined that TigerSwan was unfit to obtain a license to work in the state based on a lawsuit it is facing for unlicensed security operations in North Dakota.

But TigerSwan did not give up on its ambitions to work on another controversial Energy Transfer Partners project, Louisiana’s Bayou Bridge pipeline. Bayou Bridge is a 163-mile oil pipeline that represents the tail end of a massive system that starts in North Dakota’s Bakken fracking region. The system’s northernmost section is the Dakota Access pipeline, which was completed about a year ago and faced a huge, indigenous-led opposition movement.

Not only is TigerSwan appealing the Louisiana denial, but a deposition given to the security board suggests the firm — operated by military special operations veterans of the war on terror — may have set up a front company in order to get around the licensing mess. TigerSwan did not respond to The Intercept’s request for comment.

The same month that the board denied TigerSwan’s license application, a person named Lisa Smith rented office space in Lafayette, Louisiana. She registered her new company, LTSA, with the secretary of state’s office and submitted an application for a license with the private security board.

During the board’s background check process, its investigator uncovered a detail mysteriously missing from Smith’s resume: She worked for TigerSwan. And although a cached version of Smith’s old LinkedIn page showed she once listed TigerSwan on her profile, she had removed the firm’s name from the page.

Seeking to clarify Smith’s connections to TigerSwan, the board deposed her in September.

In the deposition, which the Center for Constitutional Rights obtained via a public information request, security board attorney Adrienne Aucoin asked Smith, “What is your present employment?”

“I work for TigerSwan,” Smith replied.

The board denied Smith’s license application, stating that she had “willfully, knowingly, and in the board’s estimation intentionally engaged in material omission of fact” with respect to her employment history. The board’s executive director, Fabian Blache, told The Intercept, “It appeared that Lisa Smith’s failure to include the information about TigerSwan on her application was a deliberate attempt to keep us from drawing a nexus between the two, and that the application that was being sought at that time could have been, if issued, used to circumvent the denial of the TigerSwan license.” Smith did not respond to a request for comment.

Blache said the board’s background check process also discovered another TigerSwan name associated with the new firm. Brandon Nix, who had previously been listed as TigerSwan’s “qualifying agent” on the company’s application for a license in Louisiana, worked with a rental company to procure office space for LTSA.

Nix, who told The Intercept that he hasn’t worked for TigerSwan since August, said he did not know Lisa Smith and hadn’t heard of LTSA until he found out about the deposition. “Yes, at one point I was given the directive to go pick up a key for an office. What that office is for is none of my business,” Nix said. “There are things that, on my level, were, hey this is what your objective is, go do it, get it done, roger that, move on.”

During the deposition, Smith told the board attorney that she had been the one to pick up the key.  Asked if there would be any reason for the rental company to believe that it was actually Nix, Smith said no. This was another “glaring misrepresentation,” Blache noted in his letter denying the LTSA application.

Nix said he was managing TigerSwan’s licensing efforts in Louisiana at the time of the office rental. TigerSwan’s goal “was trying to get there in time to get a license in order to get work” on the Bayou Bridge pipeline, he told The Intercept.

As Smith was setting up the new security firm, TigerSwan was also bringing on lobbyists from the high-powered firm Southern Strategy Group of Louisiana to lobby the state’s executive branch, which encompasses the Board of Private Security Examiners. Blache said he was unaware of any efforts by the lobbyists to contact board members. “There’s nothing about anything that’s going to influence these board members to do anything other than what the four corners of the law say they can do,” he said. 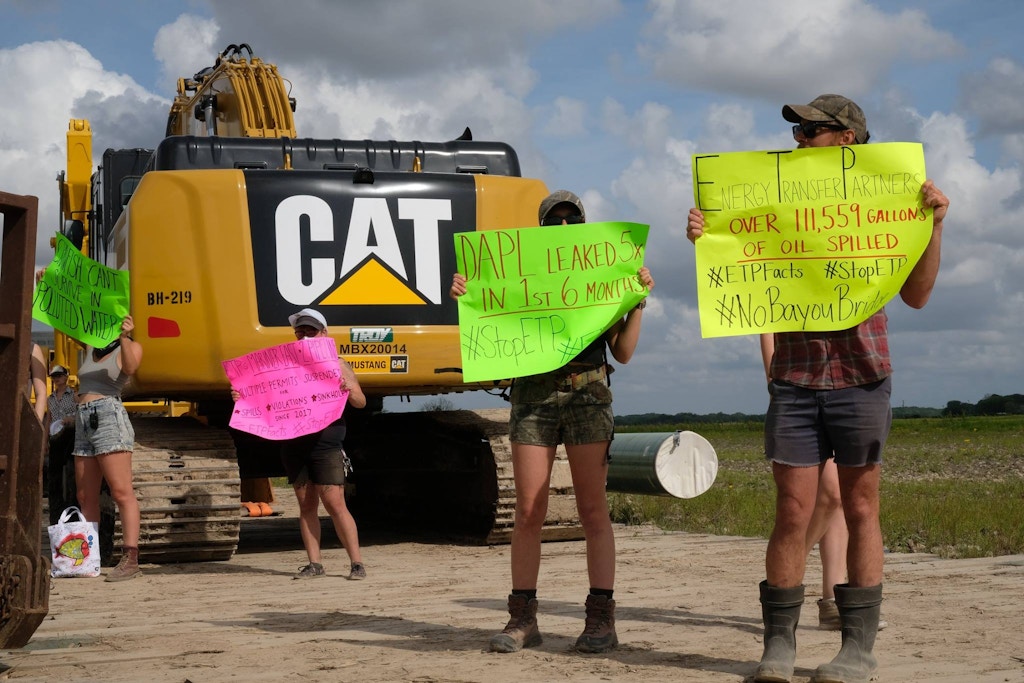 Worksite disruptions and blockades are carried out along the pipeline route on March 27, 2018.

Changing a company’s name is a classic tactic used by those whose brands have been tarnished by bad press. It’s a strategy that another notorious mercenary security firm, Blackwater, deployed repeatedly — transforming from Blackwater to Xe to Academi.

Cherri Foytlin, a member of the indigenous women’s advisory council for the anti-Bayou Bridge L’eau Est La Vie (Water Is Life) Camp, told The Intercept, “I think that it’s no surprise that TigerSwan is an unethical company. They’re hired mercenaries that will do anything for a buck.” According to documents leaked to The Intercept by a TigerSwan contractor and materials obtained via public records request, the firm oversaw a massive security response to the NoDAPL movement involving undercover operatives, aerial surveillance, social media monitoring, and a propaganda campaign.

“I’m really proud of the board, honestly, for following the law and for not allowing a company like TigerSwan take root in Louisiana communities,” said Foytlin.

Even so, Foytlin says she’s felt the presence of private security as her group has ramped up its blockades and occupations of pipeline construction sites. She’s noticed people filming her as they drive by in trucks, helicopters over protest actions, and out-of-place men in khaki pants at the Piggly Wiggly grocery store in her working-class neighborhood.

In her deposition, Smith denied that her license application had anything to do with TigerSwan, though the firm’s lawyers were present at the deposition. She said she didn’t list TigerSwan as her employer because of a technicality. She had been working on a contract that TigerSwan had with the insurance company MetLife, and because her days were spent at the MetLife Security Operations Center, she listed MetLife as her employer.

When the MetLife contract was finished, Smith decided to start her own business, she said, because she needed a new job. In her deposition, she did not explain why she chose Louisiana for her new venture but told the board that she had worked in North Carolina, where TigerSwan’s headquarters are located, for the past 15 years, and had only ever been to Louisiana on visits.

“What kind of private security prospects do you have for your business?” Aucoin asked.

“I don’t have any,” Smith replied. She said she didn’t know if her company would bid to work on the Bayou Bridge pipeline.