Access to education behind bars lowers the odds of recidivism by 48 percent. So why is there still a ban on Pell Grants for prisoners? 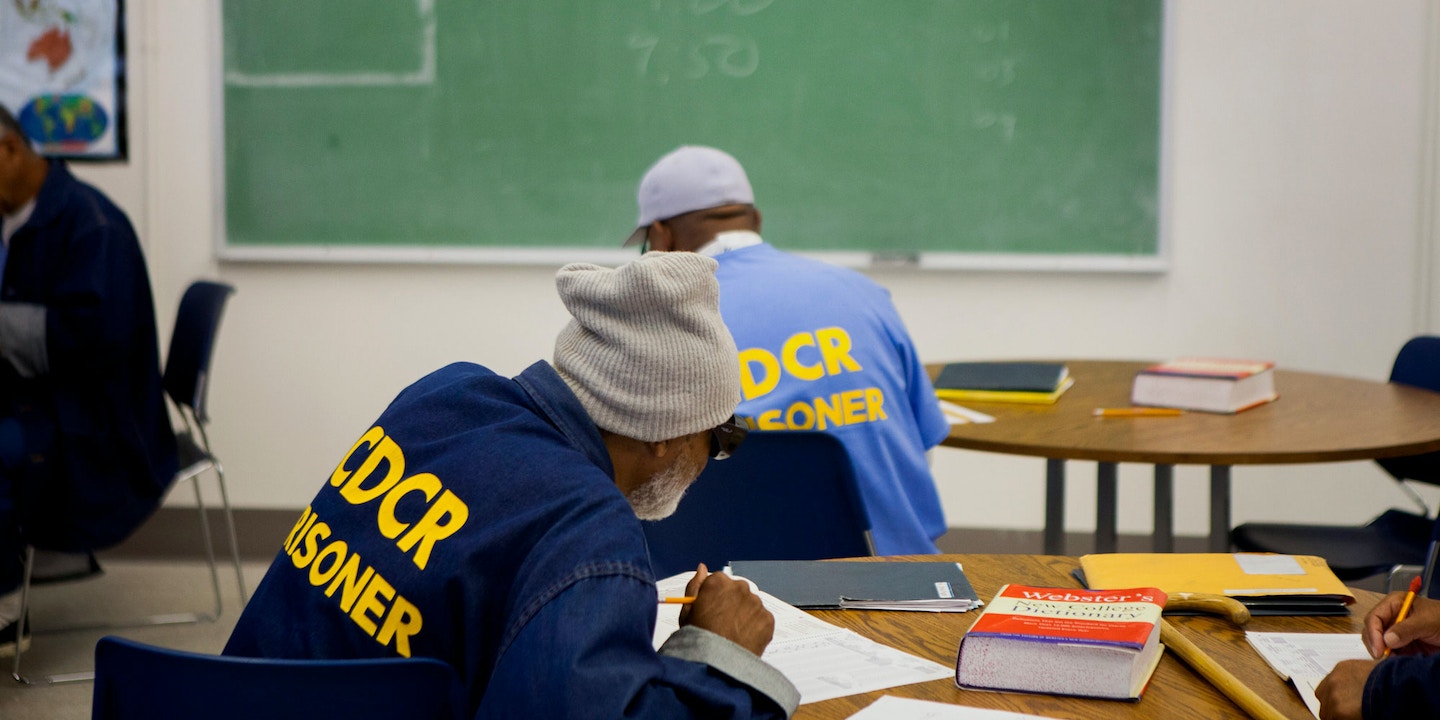 Aaron Kinzel grew up poor in Toledo, Ohio, and from an early age, he was pulled into a life of crime. He didn’t know his father, and his mother’s partners encouraged him to break into houses, sell drugs, and engage in various forms of violence. “I just grew up around a lot of bullshit,” he says. “I was really groomed to be a professional criminal.”

He was a teenager on probation in 1997 when he left the Midwest on an ill-fated road trip to Maine with his girlfriend. He was carrying drugs and a loaded gun when he was pulled over by a state trooper. With the officer standing outside his car window, Kinzel panicked. He pulled his weapon and fired at the officer, who fired a return shot into the air as he dropped to the ground. That prompted the trooper’s partner to unload: He fired 15 rounds from a 9 mm Beretta into Kinzel’s car. Amazingly, no one was injured — not even the state trooper. Kinzel’s shot had missed him completely. “It was miraculous,” he recalls.

After a high-speed chase and a night on the lam, Kinzel and his girlfriend were apprehended. Kinzel was charged with the attempted murder of a police officer and sentenced to 19 years in prison.

Behind bars, his life changed. He earned a GED while awaiting trial, and once in prison, that made him eligible to take college-level classes. He was encouraged to do so not only by the teachers working inside his Maine correctional institution, but also by the lifers he met there. “They were scholars,” he recalls. “They have just been reading for decades and had changed their lives.” They told Kinzel to eschew a life of violence and pursue an education. While still incarcerated, he scraped up enough money to take one for-credit college course. He was hooked. Once he was released, at age 28, Kinzel kept going. He got bachelor’s and master’s degrees and is currently working on a doctorate at the University of Michigan, Dearborn, where he also teaches classes in criminal justice. “I think about the dumb shit I did as a kid and think, God, night and day as compared to how I am now.”

Kinzel’s story is included in a comprehensive new report from the Vera Institute of Justice and Georgetown Law’s Center on Poverty and Inequality, which encourages the government to take an important step toward expanding access to postsecondary education for incarcerated individuals: reinstate access to federal Pell Grants for eligible students behind bars. Doing so would lower recidivism, pump millions into local economies, and save state taxpayers hundreds of millions in correctional costs, advocates argue. “It is a common-sense investment,” says Vera’s Fred Patrick, “and a win-win for states, the country, and for incarcerated individuals, because they’re able to come home and thrive.”

To Kinzel, this makes perfect sense. “I think formally incarcerated people, for the most part, are some of the hardest workers. If you give people the opportunity, nobody wants to go back to prison. Nobody wants to sell drugs and do all this grimy shit. It’s just sometimes, you don’t have a choice.”

The federal Pell Grant program was created in 1972 to provide funding to students who lack the resources to pay for higher education, including incarcerated individuals. (Unlike typical federal student aid, a Pell Grant generally does not have to be repaid.) By 1982, there were 350 postsecondary education programs in prisons, and by the early 1990s, the number had risen to nearly 800 programs spread across some 1,300 facilities.

But in 1994, Congress passed the Violent Crime Control and Law Enforcement Act, which helped to increase the nation’s ballooning prison population while also blocking incarcerated individuals from accessing Pell Grants. It was an ill-conceived move: Access to education behind bars, and the resulting boost to employment after release, wards against recidivism, which in the U.S. runs at roughly 50 percent during the first three years after release. (A government study tracking former inmates from 2005 to 2014 found that 83 percent would be rearrested at least once during those nine years.)

After the Pell Grant ban was implemented, the number of prison-based educational programs rapidly declined. Currently, some 60 percent of individuals in prison will not get any in-prison educational opportunities beyond a GED, though in 2014, 70 percent of people in prison expressed a desire to pursue postsecondary education.

The new report from Vera and the GCPI argues that providing the education that incarcerated individuals want would deliver rich rewards — not only lowering recidivism and saving the broader public millions per year in correctional costs, but also increasing wages and providing a foundation to break intergenerational cycles of poverty and crime.

The vast majority of incarcerated individuals are of prime working age — 78 percent of men and 83 percent of women are between the ages of 18 and 54 — yet they do not fare well in finding work upon release. According to a recent study by the Brookings Institution, just 55 percent of men report any income within a year of release; the median earnings for the group is roughly $10,000.

Vera estimates, conservatively, that if half of all state inmates eligible for Pell Grants (roughly 463,000) were given access to funding and educational programming, rates of employment would increase significantly, while earnings over the first year after release would collectively increase by more than $45 million. And because education relates to a significant drop in recidivism — lowering the odds by 48 percent — states would stand to save more than $365 million per year in correctional costs, according to the report. Texas and New York could each see annual savings of roughly $38 million; in California the annual savings would be almost $67 million.

Arthur Rizer, a former cop and federal prosecutor who now works for R Street, a center-right think tank, is a serious fan of the idea of bringing educational opportunities back into prisons. “It’s bat-shit crazy the way that we’ve handled this in the past,” he says. He notes that the vast majority of jobs require some postsecondary education, so providing that to inmates just makes sense — for individuals, businesses, and the community at large. “I call it trickle-down criminal justice.”

Ultimately, he says that data should be driving criminal justice reforms. “The takeaway for me is that this makes us safer. Period.”

There has been bipartisan support for legislation that would reinstate Pell Grant access. Tennessee Republican Sen. Lamar Alexander, who is chair of the chamber’s education and labor committee, has signaled a willingness to do so as part of reauthorizing the Higher Education Act, while Hawaii Democratic Sen. Brian Schatz has previously proposed a standalone bill — the Restoring Education and Learning Act of 2018 — to repeal the ban. “Most prisoners, sooner or later, are released from prison, and no one is helped when they do not have the skills to find a job,” Alexander told the New York Times last year. “Making Pell Grants available to them in the right circumstances is a good idea.”

Rizer says he is confident that there is an appetite in the White House for this reform too. Coming off passage of the First Step Act (despite the controversy surrounding it), he said he has heard from the White House that President Donald Trump sees criminal justice reform “as his legacy issue.” The iron “is really hot right now for these kinds of issues.”

And even if the feds drag their heels, he says there is plenty of energy in the states to return meaningful education to incarcerated students. Part of the energy is likely attributed to the Obama-era second-chance Pell pilot program, which is funded through 2020. As of fall 2017, enrollment in the program, which pairs 67 colleges with correctional institutions in 27 states, was up to just over 5,000 inmates. There’s movement in Texas, Michigan, and elsewhere to expand educational operations further. And despite the larger ban on access to Pell Grants, a number of institutions have longstanding partnerships to provide postsecondary education to incarcerated students. The Bard Prison Initiative has awarded nearly 550 degrees since 2001; Bard’s graduates have a less than 3 percent recidivism rate. Boston University has been educating students behind bars since 1972 through a program funded by alumni.

What Skills Do You Want Me Using?

Jose Bou dropped out of high school in the 10th grade in Holyoke, Massachusetts, and ran away from home. He sustained himself mainly by stealing from unlocked cars. He was eventually caught and locked up for a couple of years and that got him thinking: no more stealing. He wanted something more lucrative, so he became a drug dealer. Eventually, he was busted after selling 300 grams of cocaine to an undercover cop. He pleaded guilty and got a 12-year prison sentence.

Like Kinzel, it was while he was down on that bid that he turned himself around. He enrolled in the BU program and four years later was awarded a bachelor’s degree in English and American literature. He graduated with a 3.98 grade-point average. He told the Chronicle of Higher Education that he remembered sitting in his prison bunk, feeling the raised lettering on his degree and thinking to himself: “This is … the first thing I’ve ever really finished.”

He mentored other prisoners as he finished out his time, and after his release, he enrolled in a master’s program in criminal justice at BU. He taught community college before taking on a new job as the manager of Equity, Family and Community Partnerships for the Holyoke School District. He has come full circle: Once a Holyoke district dropout, he now fosters engagement to keep kids in school and away from the prison pipeline in the same community where he grew up.

Bou is wary about having his story held out as an example, mostly because he knows that the way things are now, he was pretty lucky to end up at an institution with a robust educational program. “It was just cosmic luck,” he says. “Don’t look at Jose Bou and say, ‘Why don’t you do it just like Jose? Straighten up, just like Jose?’ Because they don’t have the opportunity.”

And he agrees that returning Pell Grant opportunities to incarcerated students is important. “You can see the change in people. That’s awesome to see. It’s more fulfilling than locking someone up — of course, we’re always going to need to lock some people up,” he said. “But what are we doing to prepare society for that individual to return?” It’s not as though people in prison don’t have any skills, he notes, but it’s a matter of trading those for more productive skills. “I’ve got other skills I can use: robbing, stealing, violence. So, if you don’t teach me new skills, I’m still going to survive. It’s just, what skills do you want me using?”