To fight for the decriminalization of sex work is to fight for and with society’s most vulnerable and marginalized communities. 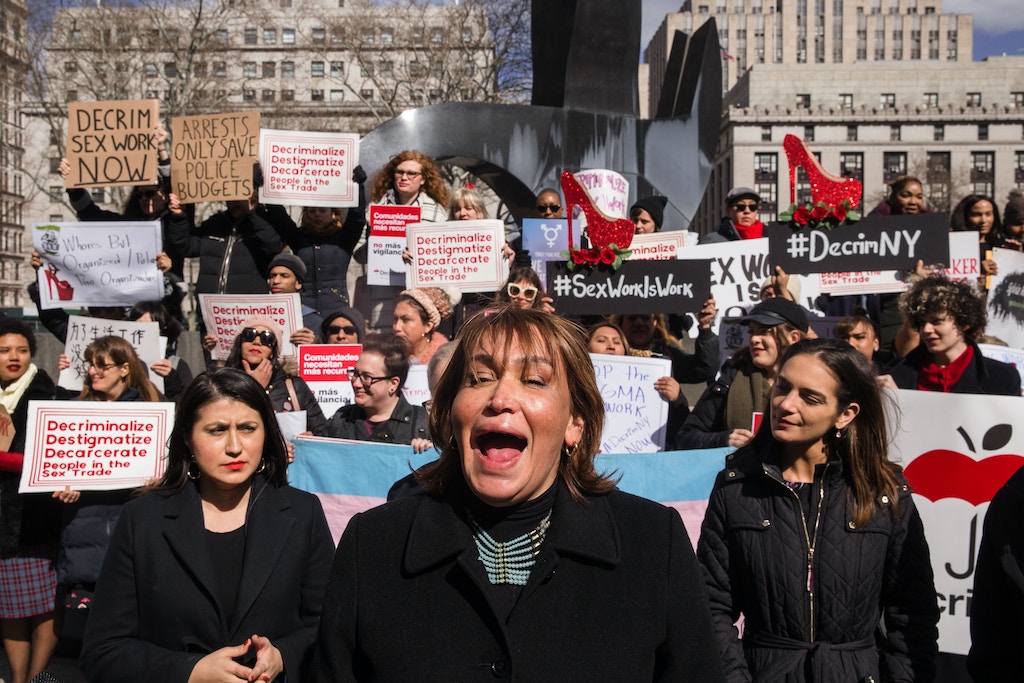 Tears welled up in the eyes of many of the 150-plus people gathered in New York City’s Foley Square on Monday afternoon. Not all the tears came because of the frigid winds of the “bomb cyclone” blowing through the region. Instead, standing before the crowd, Cecilia Gentili almost began to cry because of the strides taken for the cause she was there to promote. “It feels surreal to be here, talking about this. It’s very emotional for me as a former sex worker,” said Gentili, an advocate for sex workers’ and transgender rights. “We will decriminalize sex work. We’re doing it.”

Behind Gentili stood more than 30 supporters of sex workers’ rights, holding protest signs bearing slogans like “Sex work is work” and “Arrests only save police budgets.” The rally and press conference marked the launch of the DecrimNY campaign that has a coalition of over 20 organizations pushing for the full decriminalization of sex work, the decarceration of sex workers, and the destigmatization of that most censured industry. The launch also celebrated the coming introduction in the New York State House and Senate of what DecrimNY described as “the most comprehensive state-level decriminalization bill in the country.”

“This is one of the most taboo conversations for us to be having as a society. And we are not going to stop.”

“This is one of the most taboo conversations for us to be having as a society,” New York state Sen. Jessica Ramos told the Foley Square rally. “And we are not going to stop.” Ramos will be introducing the decriminalization bill this spring alongside newly elected democratic socialist Sen. Julia Salazar, Sen. Brad Hoylman, and Assembly Member Richard Gottfried, all Democrats.

The mere introduction of decriminalization legislation marks a major and hard-won point of progress in the public discussion around sex workers’ rights. It is a welcome statement for those who have been long disappointed in politicians with allegedly progressive agendas standing on the wrong side of history when it comes to sex workers’ rights. (Think of when Sen. Bernie Sanders voted to support the misleadingly titled Stop Enabling Sex Traffickers Act and Fight Online Sex Trafficking Act, known as SESTA-FOSTA, which cripples sex workers’ ability to work safely online.)

Rejecting longstanding criminal justice frameworks, which insist that sex workers are always both criminal and victim, full decriminalization would recognize that sex work is work — and not the business of the police and courts. For many, sex work may not be good work, or always free of exploitation, and it may be resorted to as a means of survival. But the very same is true of many jobs in which workers are nonetheless deemed worthy of rights and legal protections as workers.

The history of labor struggle is not the history of workers fighting for the love of their work; as authors and sex workers Juno Mac and Molly Smith remind us in their new book, “Revolting Prostitutes,” when British coal miners in the 1980s went on strike, it was not because they loved mining. And, as the advocates and elected officials pushing for sex work decriminalization make clear, any feminist and workers’ rights movement worthy of the description would be a failure if sex workers are excluded.

To fight for the decriminalization of sex work is to fight for and with society’s most vulnerable and marginalized communities, in particular women of color and of immigration backgrounds, especially transgender women who often rely on sex work when discriminated against in other industries. Black women account for 94 percent of people arrested for the absurd and capacious charge of “loitering for the purposes of prostitution” in the New York City boroughs of Brooklyn and Queens. Thus, to ignore the struggle for sex workers’ rights is de facto to allow their lives not to matter.

“I ran away from an abusive foster home and traded sex to access housing when I was 15,” said Jessica Raven, executive director of the Audre Lorde Project and a member of the DecrimNY steering committee, in a statement. “Whether we are trading sex by choice, by circumstance, or by coercion, we all need the same things: We need safety from violence, freedom from criminalization, and access to basic needs like housing and healthcare.”

Only full decriminalization will satisfy Raven and others in the DecrimNY coalition. The so-called Nordic model, in which only buyers of sex or third parties face criminalization, forces sex workers into the shadows. “In reality, these laws target loved ones, family, landlords, drivers and other people providing care and service to sex workers,” Raven said in her statement. Meanwhile, the widespread use of Human Trafficking Intervention Courts, which treat all arrested sex workers as trafficking victims, continue to place sex workers in frameworks of criminalization and regularly offer up undocumented immigrants to U.S. Immigration and Customs Enforcement agents who haunt the court rooms.

Full decriminalization will, of course, not offer economic justice and material safety for the vulnerable communities who turn to sex work for survival. It would, nonetheless, help reduce the violence of discriminatory policing — or the purported grounds for it — in their lives. With full decriminalization, law enforcement officers would no longer be able to use policing prostitution as a pretext for harassing trans women, raiding immigrants’ businesses, and discrediting sex workers who report abuse. Since the November 2018 election handed the New York Senate to the Democrats — while ushering in politicians like Salazar with progressive platforms — the notion that the state penal code could soon be adjusted to decriminalize sex work is no mere idealism.

“It depends what you consider soon,” said Jared Trujillo of the Association of Legal Aid Attorneys, another member of the DecrimNY steering committee. Trujillo, also a former sex worker, told The Intercept that legislation to repeal New York’s loitering for prostitution law, and legislation that would disallow using the possession of condoms as evidence of prostitution, could be passed in the next congressional session. “Full decriminalization could happen in a few years,” he said. Fellow DecrimNY members in Foley Square echoed his optimism. “It’s so close that we can taste it,” Gentili told the crowd.

The potential for decriminalization may have been ushered in by last year’s election, but it was built on the backs of sex workers struggling for their rights and their lives for decades. As Trujillo noted, this year marks the 50th anniversary of the Stonewall riots, which inaugurated the gay rights revolution — and were started by trans sex workers. Anything but decriminalization is discrimination; it can’t come soon enough.