The early tenure of Rachael Rollins underscores the tightrope that the new wave of progressive prosecutors are walking. 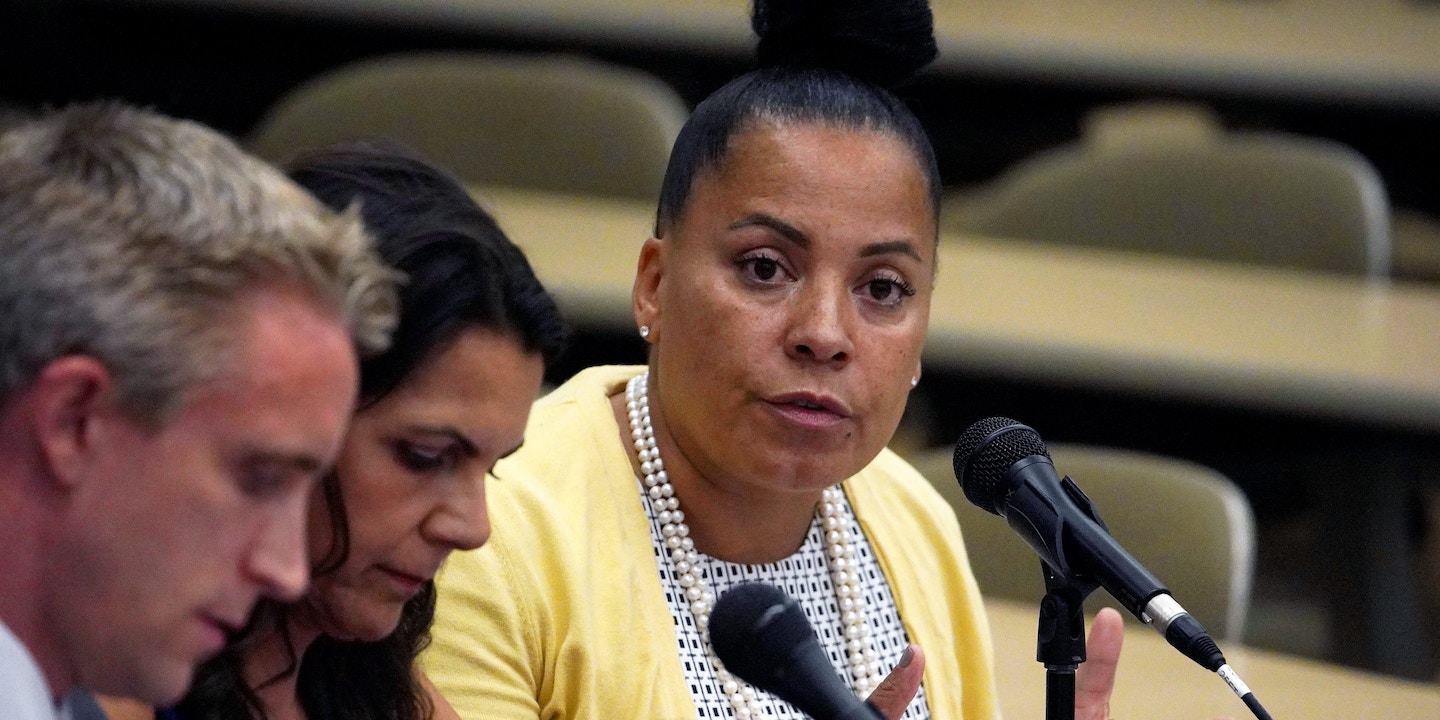 Rachael Rollins won the election for district attorney in Suffolk County, Massachusetts, last November on a campaign that promised progressive reforms, including the end of cash bail, as well as a halt to prosecutions for petty, poverty-related crimes.

It was such a direct challenge to the lucrative churn of the criminal justice system that the National Police Association filed a bar complaint against Rollins in late December, days before she was sworn in, specifically in response to her pledge to not prosecute certain low-level crimes.

Yet people are still being prosecuted, according to observers from the Boston-based oversight group, CourtWatch MA, as well as the local American Civil Liberties Union.

Rahsaan Hall, director of the Racial Justice Program for the ACLU of Massachusetts, says Rollins’s “do not prosecute” list, which includes 15 types of offenses, has not had any effect on conviction rates, because the cases are still being prosecuted, just in different ways. He described the turn to diversionary programs, suspended sentences, and no incarceration for the offenses as, at best, a different approach than what the district attorney promised voters would be her approach to crimes like drug possession, standalone resisting arrest, and being a minor in possession of alcohol.

“We see a significant number of these cases still being prosecuted and the ADAs are still making bail requests,” said Hall.

In early February, Rollins said that changing over to non-prosecution was “a process” but one that was “partly in place.”

The early tenure of Rollins, at once attacked by police as too soft on crime, and challenged by reformers as too soft on the police, underscores the tightrope that the new wave of progressive prosecutors are walking as they challenge a deeply entrenched system on behalf of a movement with little patience left.

Despite the backsliding, Rollins’s office has been strong in pushing back against Immigration and Customs Enforcement encroachment into city courtrooms, Hall said, and working on community engagement.

“There are challenges of coming in with these progressive views and developing policy,” said Hall. “There’s some deference given to allow people that come into organizations to bring in staff, establish policies, but deference only extends so far.”

While the complaint looks unlikely to go anywhere, the fact that it was filed at all reveals a hostility from police in general to Rollins’s programs and plans.

“The NPA bar complaint says we’re doing something right,” said Rollins. “They’re scared, because I meant what I said.”

Rollins, with her election victory, joined other district attorneys in the nation like Andrea Harrington — who won her election the same night as Rollins on the other end of the state in Massachusetts’s western Berkshire County — and Philadelphia’s Larry Krasner, in a small but growing movement to change the way the system affects the people at its mercy at the institutional level.

The elections of both Harrington and Rollins showed a desire on the part of Massachusetts voters for criminal justice system reform, Jonathan Cohn, co-chair of the Issues Committee of Progressive Massachusetts, told The Intercept. But, Cohn said, community oversight is essential to ensure that victories at the ballot box actually translate into real reforms.

“Voters in Berkshire and Suffolk County and other counties across the country showed that they want their district attorneys to be a part of the solution instead and want to see an end to the systemic injustices that plague our criminal legal system,” said Cohn. “With Rachael Rollins and Andrea Harrington now in office, it is important for the public to now work to hold them accountable to their campaign promises and empower them to do so.”

The institutional limitations district attorneys face are serious. But there is a clear mandate from voters to change the system. Rebecca Kavanagh, a public defender in New York City who frequently comments on criminal justice reform issues, said in an email that she thinks deflecting the call for reform would be a mistake.

“In the past when prosecutors have pursued harsh criminal justice policies, it has been easy to understand, if not justify, because tough-on-crime rhetoric is what got them elected,” said Kavanagh. “When reform prosecutors win office promising radical change and then things seem to continue as before, that is much more difficult to comprehend.”

The role of district attorney in the criminal justice system is part of a problem that has affected America for centuries, said Boston-based criminal defense attorney Carl Williams — a former lawyer with the Massachusetts ACLU — and that begs the question of whether it can be reformed at all.

“There are two ways to look at it,” said Williams. “First, you can think that despite some problems or missteps, the car is still in good condition and you can polish it up to make it shiny again. The secondary analysis holds that the system is rotten to its core.”

Williams told The Intercept that he buys more into the second analysis and called the criminal justice enforcement structure a system of social control that, if maintained, will continue to guarantee bad outcomes for the poor and people of color.

“Right now, people are being put through the grinder,” Williams said, “That must stop.”

“If promises were made, and the changes aren’t being made in the commonwealth, it calls into question whether or if the changes will happen,” said Williams. “Or is this just the same old, same old with some new talking points around it?”

Rollins, who was elected in a landslide with over 72 percent of the vote, told The Intercept that she welcomed being observed by CourtWatch. “I’m happy people spend time out of their day to hold me accountable,” she said. “I have the ability to take away people’s freedom. Any day when your liberty is taken away is a major decision that impacts your life.”

Atara Rich-Shea, an organizer with CourtWatch, told The Intercept that she was pleased Rollins was welcoming the group’s unofficial oversight. But, Rich-Shea said, just being open to accountability isn’t enough — especially if Rollins is shifting from declining to prosecute to a “soft prosecution” approach to certain crimes.

Over in Berkshire County, Harrington has had an easier ride than Rollins. That’s in part due to the sparsely populated but large geographic layout of the Berkshires and the fact that the county lacks the kind of cohesive criminal justice reform movement found in Suffolk. Thus far, Harrington says she’s concentrating on how to put into place the social safety nets and programs that she believes will reform criminal justice in the Berkshires. Harrington acknowledged that it’s an uphill battle, and that putting her plans into place may take longer than some of her supporters had hoped — though she has unveiled a plan to end cash bail in the county.

“I think a lot of the work is structural change,” said Harrington. “We need to get money into the system for programs that help people.”

But Harrington, unlike Rollins, feels that she has to be more cautious in how she raises these issues within her community, because her election was more divisive. “She’s able to be very outspoken,” said Harrington of Rollins. “I have to bring people together.”

Rollins was one of five competing for the Democratic primary, after which she faced a disorganized independent in the general election. But Harrington was up against two opponents in her primary, making for a closer and more personal race. The incumbent Harrington unseated also ran a write-in campaign against her in the general, muddying what likely would have been a clear walk to the win. Rollins, on the other hand, cruised to victory in November with a clear mandate.

The changes both district attorneys are trying to implement are unpopular with the old guard, including law enforcement. Other reform candidates often face similar opposition: Krasner, who has made headlines for his progressive reforms in Philadelphia, has had a frosty relationship with the city’s police. Krasner told The Intercept that the pushback he’s received has come from the Fraternal Order of Police, rather than officers in the department itself. That’s because FOP members are mostly older, retired officers — overwhelmingly white Republicans who don’t live in the city. Of the 25,000 FOP members, Krasner said only around 6,800 of them are active duty, giving the older, more conservative members outsized influence.

And then there’s the money.

“They all are affected financially, directly, by decisions we make,” said Krasner. “This is true of the police, correctional officers, and other criminal justice institutions.”

If the district attorney’s office were to decriminalize marijuana, for example, then officers wouldn’t be paid to go to court to defend marijuana arrests. And the demand for correctional officers would decline with lower incarceration rates and the closure of prisons and jails.

“We’re dealing with a systemic incentivization for arresting people for everything to go to court and make money,” said Krasner.

Judges, too, can act as barriers to reform. Krasner argued that judges belong to an older, more conservative culture that’s different than the culture now seen in Philadelphia, particularly since his election in 2017.