Given that his opponent was Republican Sen. Ted Cruz, O’Rourke got a pass from teachers in 2018. The test will be harder this term. 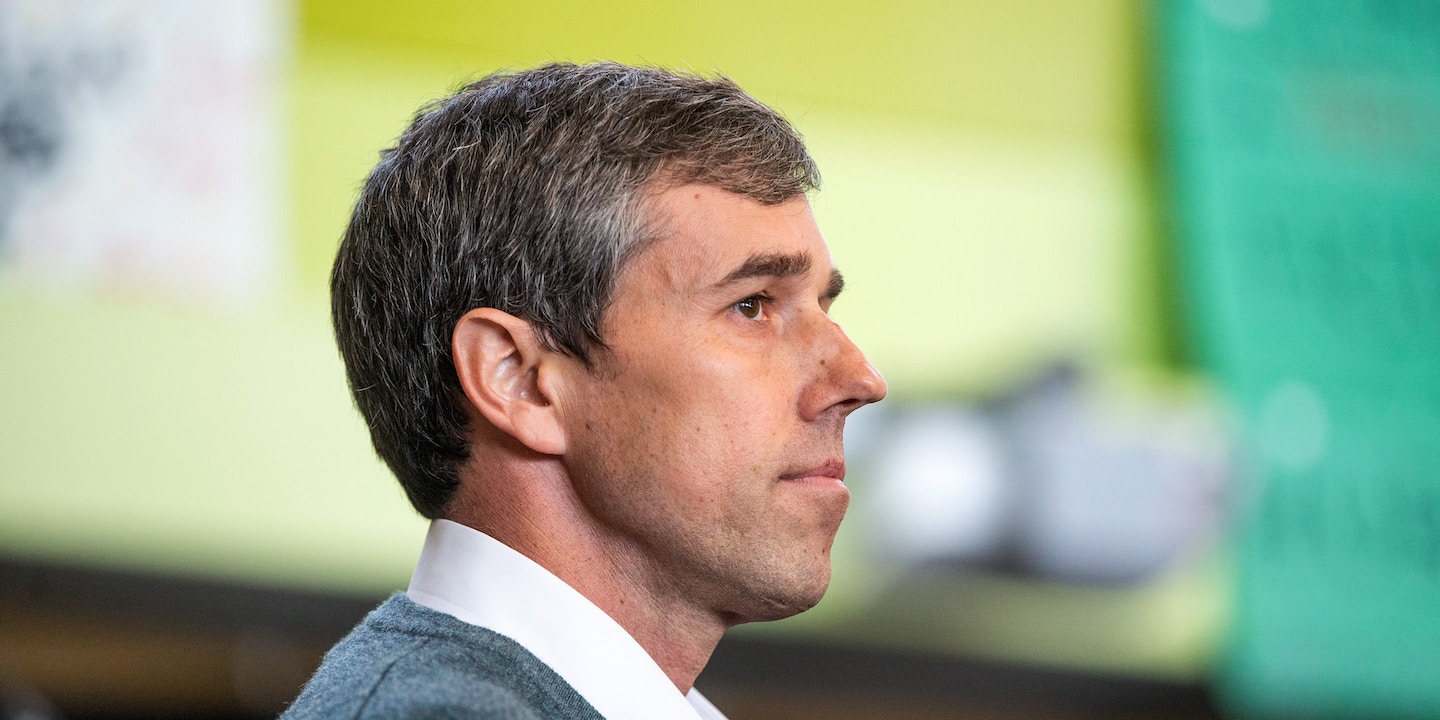 When Beto O’Rourke ran for Senate in 2018, he highlighted the importance of public education and consistently said that he stood squarely in support of teachers. Given that his opponent was Republican Sen. Ted Cruz, that was more than enough to secure endorsements from both the Texas State Teachers Association and its parent union, the National Education Association. Teachers across the country helped fuel his small-dollar donor machine.

There was little reason, then, to probe Beto O’Rourke on charter schools. In the Democratic presidential primary, he is unlikely to get the same gentle treatment — particularly given his wife Amy O’Rourke’s deep ties to the charter community.

Education in general was not a top priority for O’Rourke on the Texas campaign trail, nor did he have a robust record of tackling education issues during his three terms in Congress. Voters had a general sense of where he stood on K-12 education issues: He supported a rollback of standardized testing; he opposed the advent of private school vouchers and Education Secretary Betsy DeVos; he believed teachers should be paid more and that the federal government should fully fund the Individuals with Disabilities Act.

But O’Rourke stayed conspicuously silent on the topic of charter schooling during his Senate campaign, and his backers in the education establishment decided not to press him on it.

This is not because charter schools are not a growing issue in the state of Texas. Just this year, the Texas American Federation of Teachers called for a pause on the publicly funded, privately managed schools until the state legislature agrees to pass a series of reforms. “We’ve always been against charter expansion and school privatization, but this is the first time we’ve said, ‘Let’s take a time out,” said spokesperson Rob D’Amico.

Clay Robison, a spokesperson for the Texas State Teachers Association, told The Intercept his union is “very concerned” about charter growth in Texas, “especially the national charter chains that have been zeroing in on the state.” A recently commissioned TSTA poll found 73 percent of respondents statewide said there should be a halt on charter expansion until there’s more evidence of success. The two state teachers unions also filed a lawsuit last summer against a Texas law that encourages school districts to turn struggling schools over to charters or outside operators. That case is pending.

For the last couple of years, the Democratic Party has been grappling with voters’ changing views on charter schools. In 2016, the party’s platform, which maintained its support for providing parents with “great neighborhood public schools and high-quality public charter schools” articulated, for the first time, an opposition to for-profit charter schools, which are a small but politically powerful segment of the movement. Other elected officials, and presidential candidates like Hillary Clinton, also began that year adopting this compromise-seeming position.

In 2016, charter advocates also suffered an expensive loss in Massachusetts, when voters across the blue state rejected a ballot initiative to lift the state’s charter school cap. The measure failed 62 percent to 38 percent, and while the initiative was being led Democrats for Education Reform, the state’s Democratic party had come out against it.

In 2017, with Donald Trump in office and GOP mega-donor Betsy DeVos appointed to lead the Education Department, the politics around charters continued to grow more thorny for liberal school choice supporters, many of whom who had long been hostile to teacher unions. That year, Gallup reported a growing partisan divide on charters, with Democratic support at 48 percent, down from 61 percent in 2012. Republican support held steady over the five years, at 62 percent. Public support for unions, meanwhile, continued to climb — climbing from 56 percent in 2016 to 61 percent in 2017, and reaching 62 percent — a 15-year high — in 2018.

Charters were further thrust in the spotlight in the 2018 midterms, as many Democratic candidates campaigned on reserved or qualified support for charters. Newly elected Democratic governors in Illinois, California, and New Mexico all said they’d back a pause on charter school expansion, and other Democratic officials grew more forthright with their critiques. The teachers strikes that swept the nation also elevated concerns around charter schools, particularly when Los Angeles educators went on strike for six days at the start of 2019.

While most Democratic candidates are likely to face questions about charter schools on the trail to the White House, that likelihood is greater for Beto O’Rourke’s than most, given his wife’s stature in the charter school movement. Amy O’Rourke is a former charter school leader and currently sits on the board of a local education reform group that supports expanding charter schools in El Paso.

“Amy is free to work wherever she chooses, that’s her choice, but I think at some point Beto is going to be asked about that and he’s going to be asked about his position on public schools and charters,” said Norma De La Rosa, the president of the El Paso Teachers Association. “He was asked during his campaign about the more pressing issues like immigration and the wall, but I can assure you, he will be asked about charters now.”

Amy O’Rourke began her education career as a kindergarten teacher in Guatemala, where she worked for one year after graduating college. When she returned to El Paso in 2004, she connected with a local community organization, Centro de Salud Familiar La Fe, and helped them launch a dual-language charter. She served as superintendent of the school, La Fe Preparatory School, from 2007 to 2012. In her application to open the school, she wrote that the local school district “failed to create an educational system that can generate true success for all students in the community” and promised to offer “a drastically different educational experience” for Segundo Barrio children. She also noted that “innovation and creativity are the backbone of charter schools” and praised other Texas charters for their commitment to “seeing the underprivileged succeed through hard work.”

Now, Amy O’Rourke serves on the board of the Council on Regional Economic Expansion and Educational Development, or CREEED, a business-backed organization that launched in 2014 to help push education reform initiatives in El Paso. Amy O’Rourke also directs CREEED’s “Choose to Excel” initiative, aimed at boosting college-readiness and which focuses, in part, on expanding charter schools in El Paso. In 2017, CREEED hosted a two-day summit, funded in part by the Bill and Melinda Gates Foundation, to strategize on how to advance education reform. Several days later, a local philanthropic group, the Hunt Family Foundation, donated $12 million to CREEED, specifically to help boost charter school enrollment El Paso. The foundation’s chair, Woody Hunt, who also serves as vice chair on CREEED’s board, told the El Paso Times that he hoped the big donation “will show large charter school backers, like the Bill & Melinda Gates Foundation, that the education community in El Paso is committed to school choice.”

The donation was slammed at the time by local teacher unions, and De La Rosa of the El Paso Teachers Association told The Intercept that her organization has been upset with the way CREEED has operated in the city. “If they are as concerned about public education and the kind of education we are providing for our students, then why did they not get involved within the public school system and work with administrators and teachers to see how they could help us change direction here in El Paso and providing those resources we desperately need?” she asked. “We’ve made it clear that their philosophy does not mesh with our philosophy of what a good public school and a good public education for all our students looks like.”

One of CREEED’s focuses over the last several years has been to bring the fast-growing charter network IDEA Public Schools to El Paso. IDEA is one of the largest nonprofit charter networks in the country; it opened 18 new schools this past fall. It’s a “no excuses”-style network, with school uniforms, longer school days, a focus on enrolling in college, and strict discipline rules.

The Intercept contacted CREEED to speak with Amy O’Rourke about public education and charter schools, and a spokesperson said they forwarded the request to the Beto O’Rourke campaign, which did not return request for comment. Beto O’Rourke’s spokesperson, Chris Evans, also did not return multiple requests for clarification on the candidate’s position on charter schools.

Randi Weingarten, the president of the American Federation of Teachers, met with the O’Rourkes recently in Texas. In an interview with The Intercept, Weingarten said Beto O’Rourke asked her “some really good questions” about schools and emphasized that the “value statements he’s been saying and said during the campaign [about schools] are important.” Weingarten said they discussed the educators he met on the campaign trail who had to use their own personal funds to pay for classroom supplies and that they discussed the importance of community schools with wraparound social services.

She demurred on whether they talked about charter schools specifically. “I’ve been very careful to not repeat the content of conversations I’ve had with the candidates,” she said. “But the whole context of how austerity and competition have really hurt public school opportunities is something that he was very aware of, let’s just put it that way.”

Weingarten acknowledged that education issues weren’t so central to the 2018 Senate race, but she expects things to be different in the months ahead. “A lot of issues did not get the same kind of airing that they will in the 2020 presidential,” she said. “And education issues will get an airing.”