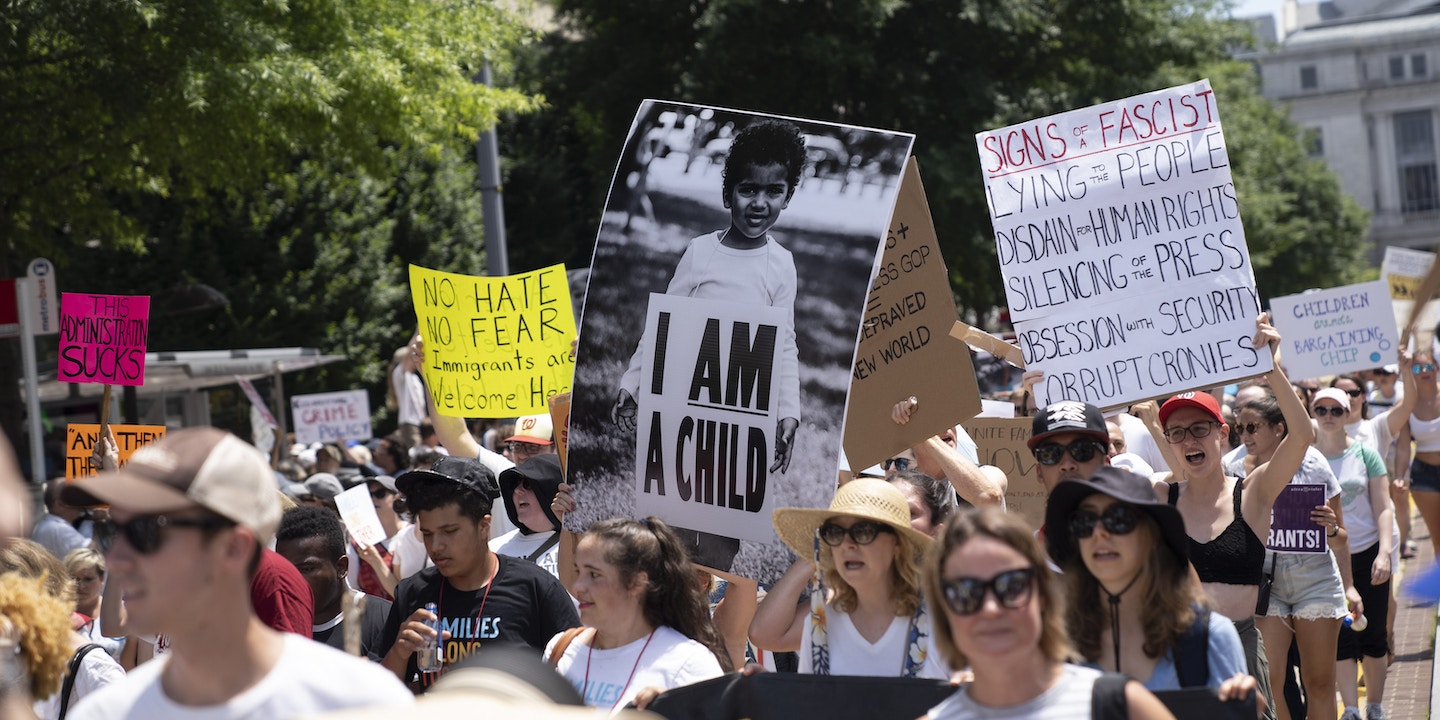 The calls for action were mounting. It was mid-June, and the Trump administration’s “zero tolerance” policy, which saw thousands of migrant children separated from their parents, was producing waves of outrage. By the end of the month, hundreds of protests were planned in towns and cities across the country. As the plans moved forward, others took notice.

In the days leading up to the protests, a private intelligence company that works with the Department of Homeland Security was monitoring the activity on the ground. Documents shared with The Intercept by the American Immigration Council, obtained through a freedom of information request, show that LookingGlass Cyber Solutions, a Virginia-based firm, gathered information on more than 600 demonstrations across the country, information that was then shared with DHS and state-level law enforcement agencies.

Tracking Facebook accounts affiliated with the protests and disseminating the intelligence to law enforcement fusion centers nationwide, the operation drilled down on physical locations where demonstrations were planned: a high school in Sebring, Florida; a church in Carbondale, Illinois; the U.S. Embassy in Mexico City; a Denny’s in Carlsbad, California; and “the old Kmart parking lot” in Stevens Point, Wisconsin. All were logged by street address and the time of the planned demonstrations.

A “Threat Analyst” in Reston, Virginia, sent the finished intelligence to a “LookingGlass Shared Services” address on June 28, two days before the protests were set to begin.

“LookingGlass has compiled a spreadsheet for State Fusion Centers detailing over 600 planned ‘Family Separation Day Protests’ across the US on June 30,” the analyst’s email read. “These originated from Cyber Threat Center (CTC) and are broken out by City and State; they provide physical location and the Facebook event ID.”

The following morning, the headquarters of DHS’s Office of Intelligence and Analysis disseminated the information to its staff, which was later circulated among Immigration and Customs Enforcement personnel.

In a statement, LookingGlass Chief Marketing Officer Joy Nemitz told The Intercept, “As a matter of company policy and confidentiality, we do not comment on matters pertaining to clients or work performed and refer all queries to the company in question.” A DHS official, speaking on background, described the information LookingGlass collected as “unsolicited.”

“The Department of Homeland Security, Office of Intelligence and Analysis (I&A) works with federal partners, including the Federal Bureau of Investigation, and state and local law enforcement through the National Network of Fusion Centers to assess threats and analyze trends in activity,” the official said in an email. “In this particular instance, a private sector entity shared unsolicited information it collected through publicly available channels with DHS I&A on protests that were scheduled to take place near Federal facilities. Throughout the summer of 2018, the Department was at a heightened state of security due to ongoing protests outside of Federal facilities and physical threats to DHS employees which did result in a least one arrest.”

The official added: “When DHS I&A receives this type of information, we are required to share it consistent with DHS policy to ensure stakeholders have appropriate situational awareness regarding personnel, facilities, suspicious activities, emerging threats, incidents, operations, and operational capabilities affecting the Department or the Homeland Security Enterprise.”

Jess Morales Rocketto, co-chair of Families Belong Together and a lead organizer of last year’s protests, condemned the monitoring of the demonstrations. “Those protests represented the best of democracy,” she told The Intercept. “It’s especially concerning given that these protests were basically thousands of moms and their kids, thousands of families, and that the Trump administration’s response to that was to put them on a watch list.”

The emails confirming the protest surveillance were released in an ongoing freedom of information battle that the American Immigration Council, or AIC — in collaboration with the Florence Immigrant and Refugee Rights Project, the National Immigrant Justice Center, Kids in Need of Defense, Women’s Refugee Commission, and Wilmer Cutler Pickering Hale and Dorr LLP — is waging to pry documents surrounding family separation from the government.

“We’ve been getting them in drips,” Emily Creighton, deputy legal director at the AIC, said of the documents beginning to surface as a result of the litigation. “We have been told in litigation that ICE, DHS, and CBP have hundreds of thousands of responsive records.”

For immigration attorneys working with families directly impacted by the administration’s “zero tolerance” regime, news of protests being monitored makes an ugly situation even worse.

“The public rightly expressed outrage when they learned of the Trump administration’s shocking policy of ripping children away from their parents,” Lee Gelernt, deputy director of the American Civil Liberties Union’s Immigrants’ Rights Project and lead attorney in a lawsuit challenging family separation, told The Intercept. “They’ll again be outraged to learn that, rather than focusing resources on reuniting these families, the administration was instead spying on them for expressing themselves.”

As an operation, LookingGlass Cyber Solutions appears to fit squarely in the larger universe of for-profit intelligence providers pitching services to law enforcement in a post-9/11 world.

In 2015, the company acquired Cyveillance, “a leader in open-source threat intelligence” that, according to the firm’s website, “delivers an open source intelligence-led approach to security through continuous, comprehensive monitoring and analysis of millions of online data sources to protect client information, infrastructure, and employees from physical and online threats.” Records indicate that Cyveillance previously provided contract work for the U.S. State Department.

In a jargon-heavy brochure, LookingGlass describes its “DHS Cybersecurity Shared Services Program for State Fusion Centers” as a combination of services and platforms designed to provide “insight and technical indicators to support a range of activities from high-level situational awareness to actionable recourse.” The company touts the expertise of its analysts and their ability to provide “deep-dive analysis, technical indicators, and situational awareness reporting,” while highlighting the role of its Cyber Threat Center as “an aggregator of global news, social media, and physical security events aligned to an organization’s area of interest.”

“CTC can be configured to provide analysts with cyber news matching topics of relevance and physical incident alerts in user-defined proximity ranges around a given point on the map,” the company reports. “Since global events can have impacts at local levels, analysts utilizing CTC will benefit from the data collection breadth of global sources from the surface web and Deep and Dark Web.”

Stood up in the wake of the September 11 attacks as another node in the war on terror, the fusion centers that companies like LookingGlass cater to have long been the target of criticism.

“This document shows that DHS accepts and distributes surveillance of protest activity on social media, including to fusion centers, which have a track record of monitoring innocent and constitutionally protected conduct,” Hugh Handeyside, a senior staff attorney at the ACLU’s National Security Project, told The Intercept, after reviewing LookingGlass’s work product.

“It also demonstrates the reach of surveillance contractors and the products they’re peddling,” Handeyside added. “We need to know a lot more about these products and how the government is using them.”

Targeting Critics of the President

In the last two years, law enforcement agencies executing the Trump administration’s immigration agenda have cracked down on critics of the president’s policies.

In Arizona, the U.S. Border Patrol and Trump administration attorneys have aggressively targeted humanitarian volunteers providing food, water, and medical aid to migrants trekking through the desert with criminal prosecutions. And in the San Diego-Tijuana area, Customs and Border Protection, the Border Patrol, and counterparts in Mexican law enforcement have run a sweeping intelligence-gathering operation targeting immigration attorneys, journalists, and activists working with, and around, migrant caravans.

“This is a chilling revelation, but follows an even scarier trend of constant government surveillance and policing of immigrant communities, and targeting of activists and journalists,” Jesse Franzblau, a senior policy analyst with the National Immigrant Justice Center working on the FOIA litigation that led to the latest revelations, said in an email to The Intercept. “The new records unveil how the administration views voices of dissent as a threat to its disinformation campaigns. Congress should be asking questions about why DHS resources are going towards efforts to target opposition to hateful anti-immigrant policies.”

Morales Rocketto, the organizer with Families Belong Together, agrees. Within the immigrant rights community, Morales Rocketto said, it is well-known “that the administration has been harassing some of the most vocal activists, lawyers, and journalists.”

“The DHS inspector general should investigate this,” she said. “Congress should demand answers about this, because the government should not spy on Americans who are exercising their First Amendment rights.”