The score card from a Democratic Party-aligned foreign policy group reflects different priorities for the party’s mainstream and progressive wings. 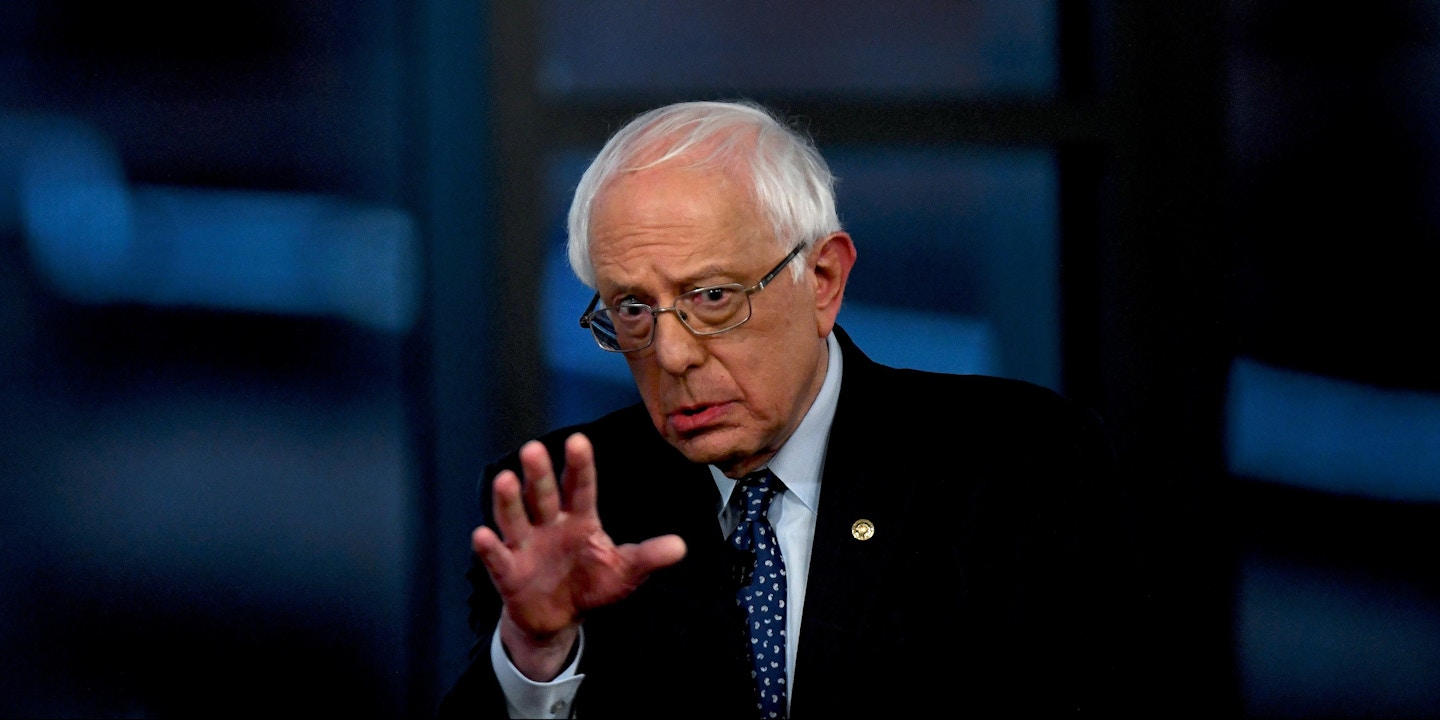 A mainstream, Democratic Party-aligned foreign policy think tank is knocking Sen. Bernie Sanders, I-Vt., for voting against new sanctions on Iran in 2017 — though the think tank itself and many members of its board oppose new Iran sanctions.

Sanders has been an outspoken supporter of the 2015 Iran nuclear deal and said at the time that he voted against the measure in order to preserve the deal. Sanctions, he argued, would have jeopardized the landmark agreement. But the sanctions were part of a package that also imposed restrictions on Russia and North Korea, which is why the think tank, Foreign Policy for America, supported the package.

Foreign Policy for America’s knock came in a score card that rated politicians on their votes in Congress. The group, also known as FP4A, released its new score card at the end of April, ranking members of Congress from the 115th session on a variety of foreign policy issues. The relatively new advocacy group gives Sanders a positive score in all but two of 13 categories — one of which was the bill that sanctioned Iran and Russia.

“We’re looking for the best single indicator, whether it’s a vote or a sponsorship, to score for each of one of 20 issues.”

With an increasingly crowded field of presidential candidates, the score card gives people an easy way to evaluate and distinguish contenders. It might not do much to damage Sanders’s reputation, but it highlights a fundamental difference in how the foreign policy community prioritizes and understands various policy issues. In this case, the score reflected a prioritization of Russia issues — particularly related to Russia’s intervention in the 2016 election — against preserving the Iran nuclear deal at a time when the Trump administration seems intent on ratcheting up tensions.

Andrew Albertson, Foreign Policy for America’s executive director, told The Intercept that the score card “can be a blunt instrument” that unfortunately doesn’t always capture the nuances in the way members of Congress vote. “It’s a position I can respect,” Albertson said of Sanders’s vote on the bill, though noting that the group still has some differences with the senator on Iran policy.

“Our basic principle is, we’re looking for the best single indicator, whether it’s a vote or a sponsorship, to score for each of one of 20 issues,” he said. “So in this case, when that very important Russia language was combined with what we in our score card committee and the experts that we convened to make these decisions collectively viewed as benign legislation on Iran and North Korea, then it’s a valuable thing to score on Russia.”

Among the members of the Foreign Policy for America’s boards are foreign policy experts who were instrumental in fighting to make the Iran deal happen. Some of those figures have expressed concerns over the choice to penalize Sanders for taking the position he did.

“I do not agree at all with its assessment. I believe Senator Sanders is right and for more reasons than you — or perhaps he, in the fullness of time — have stated.”

“I’m of course not bound to agree with everything FP4A states or publishes,” Col. Lawrence Wilkerson, former Secretary of State Colin Powell’s chief of staff and a Foreign Policy for America advisory board member, wrote in an email to The Intercept. “And, in this case, I do not agree at all with its assessment. I believe Senator Sanders is right and for more reasons than you — or perhaps he, in the fullness of time — have stated.”

In a phone interview, Wilkerson said other members of Foreign Policy for America’s leadership felt similarly on Iran and other issues the group deals with. “I would dare say that 60 or so people that came together, from Michèle Flournoy to Tony Blinken to a host of others,” he said, “there are issues, and single issues, maybe several issues, that they don’t necessarily agree on.”

Wilkerson said the scoring of the vote that included the Iran sanctions, along with a few other disagreements, had caused him to reconsider his involvement with Foreign Policy for America. “It’s even caused me to wonder about whether or not I should continue my advisory capacity with them,” he said, adding that he and others discussed their frustrations “in the corridors” and that the Foreign Policy for America leadership knows how he feels about it.

Foreign Policy for America gave Sanders a negative score because he voted against sanctioning Russia during a time when policymakers feared that President Donald Trump “might arbitrarily lift the sanctions on Russia,” Albertson said. “And that was alarming to a lot of people, pretty across the board in Congress. And us too.”

Sanders had put out a statement after that vote explaining his rationale. “I am strongly supportive of the sanctions on Russia included in this bill. It is unacceptable for Russia to interfere in our elections here in the United States, or anywhere around the world. There must be consequences for such actions. I also have deep concerns about the policies and activities of the Iranian government,” he said. “But I believe that these new sanctions could endanger the very important nuclear agreement that was signed between the United States, its partners and Iran in 2015. That is not a risk worth taking, particularly at a time of heightened tension between Iran and Saudi Arabia and its allies.” Sanders’s office declined to comment for this story.

While Sanders has been aggressively pushing more progressive foreign policy positions, many in the establishment of the Democratic Party still take a more hawkish line. Foreign Policy for America sits at the nexus of these two camps, drawing its board of directors and advisory board from the ranks of both groupings. Stalwart progressive foreign policy experts are working with more centrist Democratic-aligned figures, including a host of former administration and security officials, such as Flournoy, Blinken, and former CIA official Ned Price.

Among the progressives on Foreign Policy for America’s board of directors and advisory boards are leaders from organizations that advocated strongly for the Iran deal, such as J Street President Jeremy Ben-Ami and Ploughshares Fund President Joseph Cirincione. Ben-Ami referred questions about the Iran sanctions score to Albertson and added, “J Street as well does not have any organizational responsibility for FP4A policy or decisions.” Cirincione did not respond to a request for comment.

The other negative score Foreign Policy for America gave Sanders was for not co-sponsoring at least two out of three 2017 bills the group selected as part of “a collection of bills that would encourage political, economic, and social reforms around the world, particularly among partner states.” Those included a resolution “supporting the right of all Iranian citizens to have their voices heard” and condemning human rights violations; the International Human Rights Defense Act, which would establish a permanent special envoy in the State Department for the human rights of LGBTI people; and the Burma Human Rights and Freedom Act, which authorized assistance to victims of the state-sponsored genocide of the Rohingya people in Myanmar’s Rakhine State. Of those, Sanders only co-sponsored the International Human Rights Defense Act.

One of the issues Foreign Policy for America has focused on during its short life is Yemen. The group, Albertson said, has scored votes on blocking arms sales to Saudi Arabia and has taken a public position on ending U.S. support for the brutal Saudi-led war against its neighbor. “We’ve been very active on Yemen,” Albertson said.

In late 2018, the Senate passed a bill that invoked the War Powers Act to stop U.S. support for the Saudi-led war — a vote that many other liberal groups sat out. The victorious vote was a landmark moment, paving the way for the first-ever invocation of the War Powers Act along these lines by Congress. Despite a veto by Trump, the push was one of Congress’s most consequential foreign policy interventions in memory. Sanders, one of the earliest agitators for ending support for the Yemen war, was a key sponsor of the Senate bill.

When it came time to evaluate the 115th Congress, Foreign Policy for America declined to include the Senate’s 2018 Yemen resolution on its list of items to score. “We considered with our score card advisory committee the possibility of scoring sponsorship of H.Con.Res 138,” Albertson said, referring to the House version of the bill. “But we had a blanket principle to only score sponsorship on legislation that picked up support from at least a third of the body.”