Rep. Richard Neal told fellow Democrats on the committee that the hearing should instead focus on ways to achieve “universal health care.” 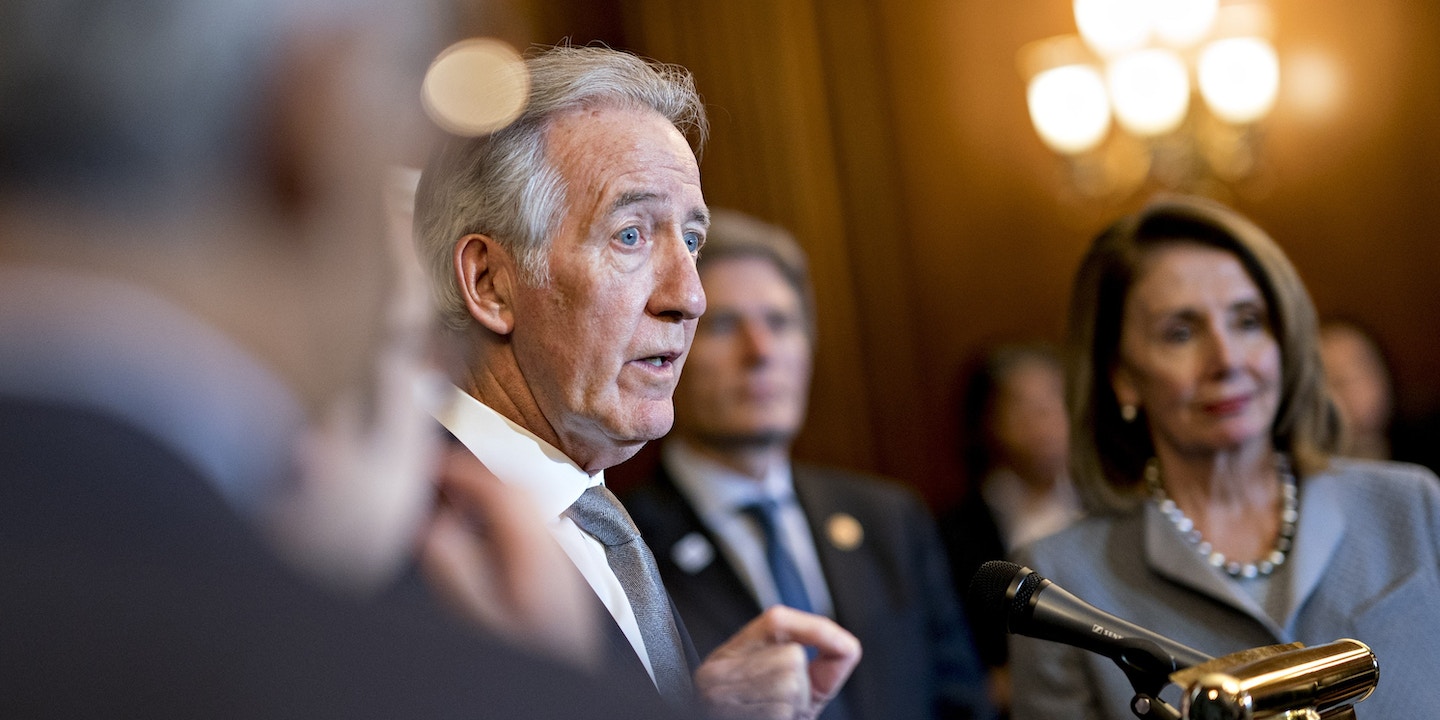 In preparation for Wednesday’s hearing on Medicare for All before the powerful House Ways and Means Committee, the panel’s chair met privately with Democrats to lay out how he wants it to unfold.

Rep. Richard Neal, a Massachusetts Democrat who has been in office since 1989, told the Democrats on the panel that he didn’t want the phrase “Medicare for All” to be used. Instead, he said, the hearing should focus on all the different ways to achieve “universal health care” or “universal health coverage,” which he said was a better term to deploy. Medicare for All, he argued, was wrong on policy and is a political loser, sources present for the meeting, held last Wednesday, told The Intercept.

Neal confirmed that he recommended a shift in emphasis. Asked whether he encouraged members in private to focus tomorrow’s hearing more on “universal health care” than Medicare for All, Neal said the conversation would be more about “universal health care and access,” pointing to his continued support for the Affordable Care Act.

“I think what we’re talking about, we’re talking about universal health care and access,” he told The Intercept. “That’s the emphasis. So we have not ruled anything out or ruled anything in. And we think that continuing to gathering information — I mean, I helped to write the Affordable Care Act, I’m naturally in favor of expanding it, and, you know, 100% of the children in Massachusetts are covered, 97% of the adults. We’ve had a good experience with it.”

Moving to the bigger stage of Ways and Means, which has jurisdiction over taxation and government revenue, represents a new high-water mark for Medicare for All.

The hearing will be held at 10 a.m. on Wednesday in the Longworth House Office Building and will include five witnesses, all of whom are, at a minimum, sympathetic to Medicare for All. That the committee is holding a hearing at all on Medicare for All is a win for the Congressional Progressive Caucus and its co-chair, Rep. Pramila Jayapal, D-Wash., and signals momentum for the legislation. A Rules Committee hearing in April marked the first of its kind in history for the push for single-payer, and moving to the bigger stage of Ways and Means, which has jurisdiction over taxation and government revenue, represents a new high-water mark for Medicare for All. Holding hearings is the start of creating the legislative history of a bill and often signals — as it does in this case — that public support for a measure has risen to a significant enough level that Congress is willing to spend its limited attention on the issue. 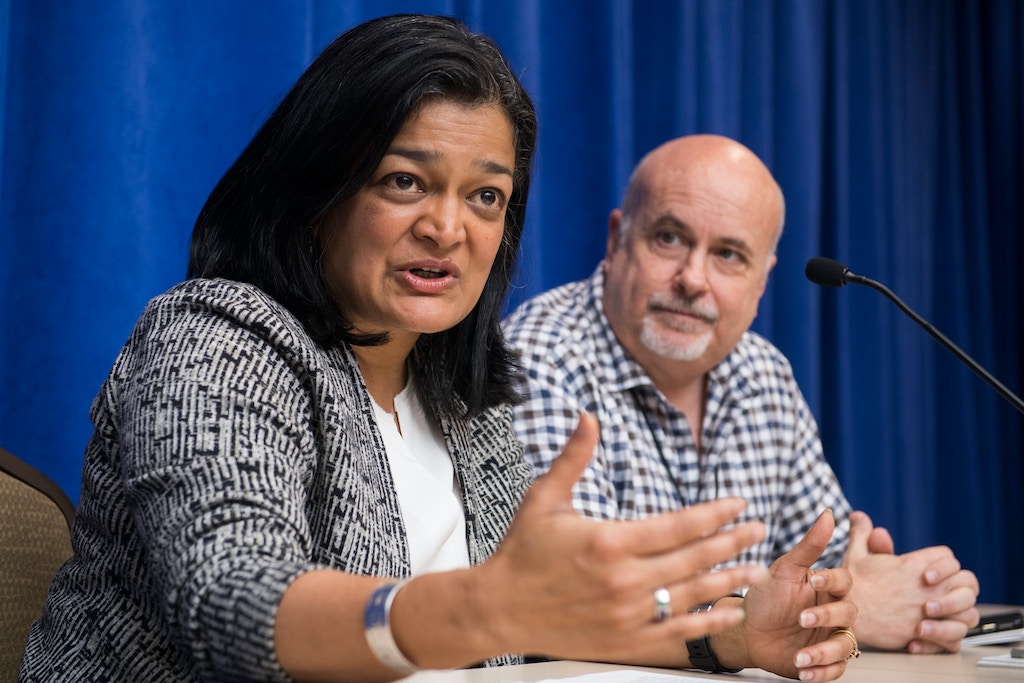 Reps. Pramila Jayapal, left, and Mark Pocan talk with the media at the House Democrats’ 2019 Issues Conference in Leesburg, Va., on April 11, 2019.

Jayapal, a lead sponsor of the House Medicare for All bill, and her co-chair Rep. Mark Pocan, D-Wisc., won a commitment for a Ways and Means hearing from Nancy Pelosi as the party leader was working to round up votes in her bid for House speaker. But converting that pledge into a hearing required the assent of the committee’s chair, Neal. When Neal came to speak to the CPC on April 30, Jayapal pressed him in person, and he committed there to the hearing. The result is Wednesday’s hearing, but its title, “Pathways to Universal Health Coverage,” hints at the internal tension.

Some of that tension comes from Democrats who are pushing alternatives to Medicare for All, such as Rep. Brian Higgins, D-N.Y., the lead sponsor of a measure to allow people over the age of 50 to buy into Medicare. After Neal consented to the Medicare for All hearing at Jayapal’s request, Higgins pressured him for his own hearing on the Medicare buy-in proposal. (Higgins had declared publicly he would not support Pelosi for speaker in 2018 but relented when she publicly agreed to make the Medicare buy-in legislation a priority and recognized him as the lead sponsor of it.) Instead of doing multiple hearings, Neal told Higgins to include his proposal in the Medicare for All hearing. Neal and one of his staffers both confirmed to The Intercept that the measure was added to tomorrow’s hearing at Higgins’s request. “As a part of the agreement with the speaker, we were sort of abiding by that agreement,” the staffer accompanying Neal on Capitol Hill said.

Higgins said Neal including the buy-in measure in tomorrow’s hearing was “a good acknowledgement of the speaker following through on her commitment to make a good faith effort to get Medicare at 50 on the agenda.” He said it was “fair” to say that Neal had been encouraging people to frame tomorrow’s discussion around pathways to universal health coverage rather than focusing on Medicare for All.

“If we do nothing to try to get a Medicare for All — first of all, there’s not consensus on what ‘Medicare for All’ means,” he said. “Is that Medicare for everybody that wants it? Or is that Medicare for everybody, and it’s compulsory?” Higgins warned against “obliterating” private insurance, which he said lost the party support with the passing of the Affordable Care Act. Higgins supported the ACA at the time but said that while it was “deeply flawed in many, many ways,” its biggest flaw was “that it didn’t have a public option, because you need that countervailing force to private insurance. And I think that if we could accomplish that this year, that would be a major accomplishment.”

But getting rid of private insurance all together would be a mistake, Higgins said. “Do we really wanna create that schism going into 2020 for ourselves but also for the presidential election? The thing that we should be looking at — and we can do this all at the same time — is Medicare at 50 and concurrently working toward a more ambitious Medicare plan for those who want it. I mean, let’s be practical about this stuff.”

Neal is widely known to be skeptical of Medicare for All, and insurance companies and drug makers are among his biggest financial backers. He fended off a progressive primary challenge in 2018 but is likely to face a renewed one in 2020. He was a close ally of former caucus chair Joe Crowley, and privately among his colleagues is hostile to the new progressive energy — and support for single-payer — that swept into the House in 2018.

Speaking last week at a workforce development event at Springfield Technical Community College in Massachusetts, Neal said the two people he turned to most for economic advice were Bob Rubin and Jack Lew, both of whom are former secretaries of the Treasury, according to a source who was at the event. Rubin, a former Goldman Sachs executive and a chairman emeritus of the Council on Foreign Relations, argued in a May op-ed in the New York Times that the secret to cutting health care costs is to spend more on social programs like “food stamps, free school lunches and public housing.”

Neal actively opposed efforts by the CPC to place progressive members onto the Ways and Means Committee, people involved in that fight told The Intercept. Other chairs of top committees, including Frank Pallone at Energy and Commerce and Maxine Waters at Financial Services, did not object to progressives joining their panel, which has created an ideological imbalance across the committees.

Neal did allow some members of the CPC to join, but generally he only accepted those who are also members or allies of the business-friendly New Democrat Coalition, such as Reps. Jimmy Panetta, Steven Horsford, and Brendan Boyle. Rep. Dan Kildee, D-Mich., was added to the committee and subsequently joined the CPC. Neal also welcomed Rep. Stephanie Murphy, D-Fla., one of the most conservative Democrats in the caucus, onto the panel, as well as Rep. Brad Schneider, D-Ill., who, like Murphy, is in the right-wing Blue Dog Coalition. Rep. Alexandria Ocasio-Cortez, D-N.Y., meanwhile, sought a spot on the Ways and Means committee and was turned away, landing instead on Financial Services and Oversight and Reform.

“I am 100% focused on the fact that this is a historic hearing in a major committee of record — something that has never happened before.”

Jayapal, who does not sit on Ways and Means and was not at the meeting with Neal, said that she is confident the hearing will nevertheless be a boost to the effort. “I wasn’t in the room, but I would just say it is impossible to have a hearing on Medicare for All without saying those words,” she said. “I am confident that our Medicare for All supporters on the committee will talk about the policy and the bill completely. And I am 100% focused on the fact that this is a historic hearing in a major committee of record — something that has never happened before. We appreciate the chairman holding this Medicare for All hearing.”

One member of the panel who heard Neal’s remarks but declined to be named said that Neal’s message was less about trashing Medicare for All and more about making sure to highlight alternative paths to universal health care.

Rep. Danny Davis, D-Ill., another Democrat on the committee, said he wasn’t at the private meeting but that members have been encouraged to look at all available options. “We talk a little bit about everything, but I don’t think we’ve arrived at any point in terms of it,” he told The Intercept. Asked if Neal was pushing members away from Medicare for All, Davis said, “I’m not sure I’d say he was necessarily the lead on the thinking around that, but certainly in our health meetings we’ve discussed everything.”