NYPD Added Nearly 2,500 New People to Its Gang Database in the Last Year 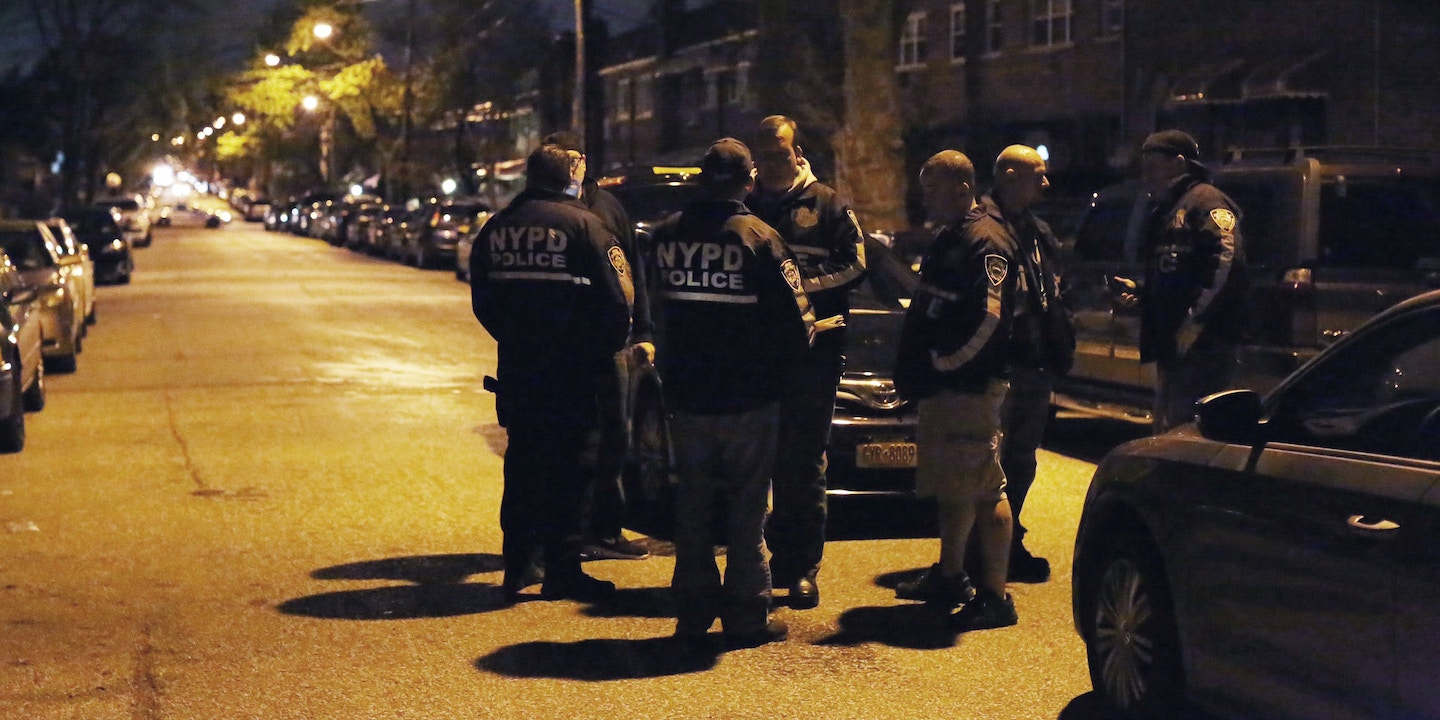 The New York Police Department is still listing children as young as 13 in its secret gang database, police officials told a New York City Council committee yesterday. The database is growing, currently including 18,084 people, up 2 percent from last June, when the NYPD last testified about the database. The increase came despite the removal of some 2,125 names from the registry — because the police added nearly 2,500 people to the database.

Oleg Chernyavsky, head of legislative affairs for the NYPD, told the council members that the database — formally termed the “Criminal Group Database” — is a “precision policing” tool, focused on “finding and arresting the few who weaken the fabric of our neighborhoods through violence and intimidation.”

Activists have long warned that the database is a dangerous form of police overreach, subjecting black and brown New Yorkers to surveillance, harassment, and criminal jeopardy based on factors as innocent as who they walk to school with and what colors they wear. The NYPD won’t disclose who is included in the database, and there is no mechanism for a person to challenge their inclusion.

“I guess the concern would be that certain communities are surveilled more than other communities. Are the Proud Boys in this gang database?”

Council Member Donovan Richards, who chairs the Public Safety Committee, has proposed legislation that would require the NYPD to notify minors of their inclusion in the database and provide a means for them to contest it, but all sides appear to agree that the legislation is a bad idea. The NYPD argues that telling young people they are thought to be affiliated with a gang would hamper investigations. Critics of the database argue that the proposed legislation could entrench the NYPD’s approach to gang policing, when what’s really needed is to abolish the database entirely.

The gang database continues to be composed almost entirely of people of color, according to NYPD testimony. Only 1.1 percent of people on the list are white. Sixty-six percent are black, and 31.7 percent are Latinx. The racial composition of the database reflects patterns of gang membership, not police biases, Chernyavsky testified.

“The NYPD does not control the recruitment of criminal groups,” he said. “If the council member wants to hold a hearing about diversity in recruitment efforts in these groups, we’ll be in the audience taking notes, but realistically we find these groups as they come.”

“I guess the concern would be that certain communities are surveilled more than other communities,” Richards shot back. “Are the Proud Boys in this gang database?” he asked, referring to the far-right, self-declared chauvinist group.

“I’m not 100 percent sure; they very well may be,” answered Assistant Chief James Essig of the NYPD Detective Bureau. “I’m not going say yes or no. But let me double check.” NYPD officials had told a reporter in October that the Proud Boys are not in the database.

The question of what constitutes a “criminal group” for the purposes of the database remains unanswered. Pressed by City Council members, police officials Chernyavsky and Essig did not provide a definition, and the NYPD press office did not respond to multiple requests for clarification.

The NYPD Patrol Guide includes a definition of “gangs” first adopted by the California legislature:

Any ongoing organization, association or group of three or more persons, whether formal or informal, having as one of its primary activities, the commission of one or more criminal acts (including drug dealing), having a common name or common identifying sign or symbol, and whose members individually or collectively engage in or have engaged in a pattern of criminal gang activity.

It’s not clear that this definition is the one the NYPD uses to compile the Criminal Group Database. It’s a definition that would seem to apply to large, predominantly white organized crime outfits like mafias, but Chernyavsky told City Council members that organized crime membership is actually tracked in a different database, because those groups often involve interstate and international criminal activity, and the NYPD polices them in conjunction with the federal government.

Chernyavsky’s distinction is complicated by the fact that some of the NYPD’s most high-profile gang raids in recent years have been made in conjunction with federal authorities and have led to federal prosecutions under Racketeer Influenced and Corrupt Organizations, or RICO, statutes, which concern criminal interference in interstate or international commerce.

If the prospect of New Yorkers being put on a secret police gang list with no recourse makes City Council members nervous, it shouldn’t, Chernyavsky argued. Mere inclusion on the list, he said, doesn’t have any concrete consequences: It’s not made public, it doesn’t show up in criminal histories or rap sheets, it’s not shared with public housing or potential employers, it doesn’t lead to sentencing enhancements, and prosecutors don’t have access to the database. “A person’s presence in the NYPD Criminal Group Database simply does not have the collateral consequences seen in other jurisdictions,” Chernyavsky said.

That contention was challenged by other witnesses yesterday. Yung-Mi Lee, a supervising attorney at a public defense group in Brooklyn, testified that any suggestion that gang database information doesn’t find its way into the hands of prosecutors is false. “As a practicing criminal defense attorney, I have seen this information being shared,” Lee said. “It’s in the police reports.” When people included in the gang database find themselves arrested for whatever reason, Lee said, “It’s clearly shared with the prosecutors. It’s in there, the prosecutors use it against our clients.”

City University of New York law professor Babe Howell conducted an investigation of a massive 2016 gang raid in the Bronx, which found that may of those swept up in the raid had no gang connections or history of violent crime. “The notion that this is precision is totally a nonsense label that we do need to resist,” she said.

“The best way to increase gang violence is to do what the NYPD are doing in terms of suppressing gangs. You’re putting out fire with gasoline here.”

The NYPD touts the arrest records of those in the database — 90 percent of them have been arrested on felony charges at least once and the average person in the database has been arrested 11.7 times — as indicators that the people it’s tracking really are serious criminals. But the department wasn’t able to tell the council how many of those arrests led to convictions. Howell argued that the increased police scrutiny brought on by inclusion in the gang database was itself likely to produce arrests, ultimately putting kids in pretrial detention in gang units and pushing them into gangs. “The best way to increase gang violence is to do what the NYPD are doing in terms of suppressing gangs,” Howell said. “You’re putting out fire with gasoline here.”

Howell urged the City Council to hold off on legislation concerning the gang database until it’s better understood. Activists have been urging the NYPD’s Office of the Inspector General to investigate the department’s gang policing practices, and they’re hopeful that a report is forthcoming. Until then, Howell said, “trying to fix this is like doing surgery before getting the MRI results.”

Kraig Lewis, a member of the Bronx 120 whose story was told in The Intercept film “Trouble Finds You,” testified to the committee about his own experience. “I was swept up in a federal gang sweep due to my childhood interactions with my friends,” Lewis said. “My evidence was Facebook posts, music videos, and the government’s interpretation of my wiretap. I had no criminal record and I was in grad school when they came for me. I had one more semester left to becoming someone like you,” he said, addressing Richards. “I spent 22 months in jail, and I don’t believe that me sitting in jail with no criminal record and no evidence of a crime due to a database is right. I shouldn’t be in the same facility as El Chapo. I feel as though my rights were violated.”

Lewis was ultimately sentenced to time served after a judge threw out the plea deal that prosecutors had extracted from him, but his dreams of higher education have been dashed, and he has struggled to find employment.

“What happens to the kid that grows up in that bad neighborhood, gets beat on every day, goes to his brothers for protection” Lewis asked, describing his own situation. “He’s a nerd, and he goes to Catholic school, he doesn’t even curse. He leaves the neighborhood but keeps in contact with the people who protected him his whole life, and then he falls in the gang database, and he gets swept. Now he’s got a felony and he can’t become you.”

Lewis looked at Richards, who grew up in South Jamaica, Queens. “I say ‘you’ because you’re a black man,” Lewis said. “And I wish I could be you, but I can’t now, because of what they did to me.”