“Anyone in LA down to make an easy $100 this Tuesday in Sacramento and fight tyranny?” read one Facebook post. 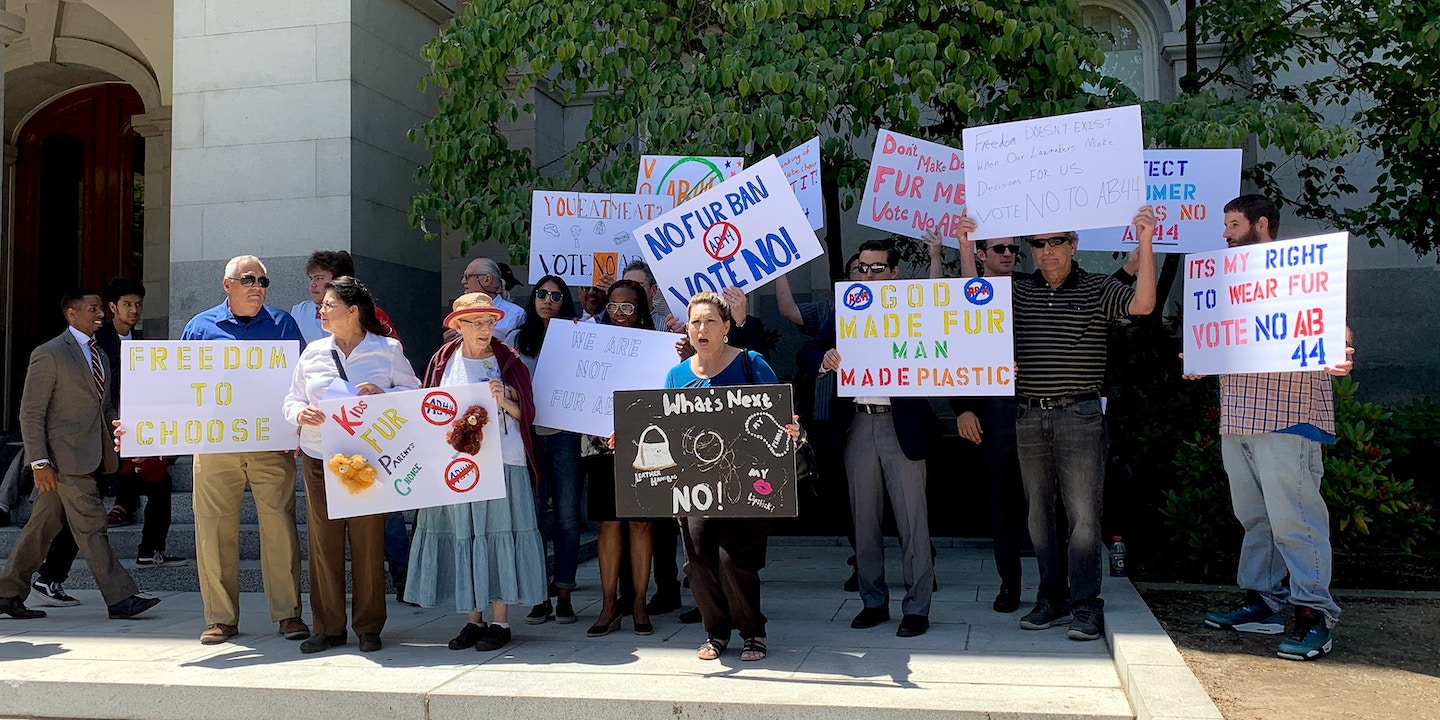 The fur industry is relying on a small phalanx of vocal supporters who have rallied across the country to prevent a ban on fur products, often inflaming the debate with accusations of hypocrisy and racism.

Many of the impassioned defenders of fur hats and mink coats, however, have received undisclosed financial support for their activism.

At a hearing in Sacramento on Tuesday morning, a parade of opponents appeared before the state Senate Judiciary Committee panel at a pivotal hearing over California’s proposed ban on fur products, AB 44. Many of the same individuals appeared at another hearing before the California Senate Natural Resources Committee last month.

Matt Gray, identifying himself only as a representative of Cal Small Biz and Taxpayers for Improving Public Safety, chastised legislators for seeking to regulate the cannabis industry while banning fur — a double standard he said he found “baffling.” Gray, one of the opponents at the hearing last month, was joined by a large group of students who also testified against the ban.

“The worst part of this bill is that people from a privileged culture are telling people of my culture that our culture is inhumane,” declared Andrew Aguero, who identified himself as a Native American student from California State Polytechnic University. Andrew DiGiovanna, a biology major at Citrus College, who was also at the Senate Natural Resources hearing, identified himself as an environmentalist opposing the legislation.

Others, including Edwin Lombard, a public and government relations consultant, said he viewed the fur ban as “an affront to the African-American community.” Lombard argued that after decades of redlining and discrimination, owning a fur coat “was a way of showing we could overcome these barriers.”

The bill passed the Senate Natural Resources Committee by one vote last month, and also passed the Senate Judicial Committee on Tuesday, but questions lingered about how the debate had shifted so quickly away from a discussion over the ethics of caging and skinning wild animals into a divisive argument about identity and race.

Documents obtained by The Intercept show that several of the fur ban opponents received money in exchange for their testimonies.

Gray received at least $7,000 by the Fur Information Council of America, the leading trade group for companies that manufacture and sell fur products, an affiliation he did not disclose during his comments to legislators. Asked about the money, Gray said he was not required to inform lawmakers of his clients during the hearing.

Documents obtained by the activist group Direct Action Everywhere, or DxE, suggest that some of the students also received financial support for their activism.

“Anyone in LA down to make an easy $100 this Tuesday in Sacramento and fight tyranny?” wrote Aguero in a Facebook post two days before the June 25 hearing.

Benjamin Hunter, a recent graduate from California State Polytechnic University at Pomona, replied, “Haha! Sure.” Hunter appeared at both hearings to testify against the bill. He could not be reached for comment.

Several other students responded in the affirmative. One of the students happened to be a DxE volunteer asking in order to find more information about Aguero’s work. In messages exchanged with Aguero, the DxE volunteer, posing as an AB 44 opponent, was connected to DiGiovanna, who provided a contract with Mobilize the Message, a Republican consulting firm.

The contract listed various ways in which workers were expected to contact “4 key legislators” in opposition to AB 44. “You will be compensated $175 total for the program,” along with “additional opportunities and bonuses” for “top performers,” the contract noted.

“You will be compensated $175 total for the program,” along with “additional opportunities and bonuses” for “top performers,” the contract noted.

Cliff Maloney, founder of Mobilize the Message, did not respond to a request for comment. Maloney is the president of Young Americans for Liberty, a libertarian youth group. Federal Election Commission records show that his firm provided contract work for a number of GOP political action committees, including Protect Freedom Action Committee, which worked to elect Republican congressional candidates during the midterm election cycle last year. The company is currently providing assistance to the Stop AOC PAC, a fundraising apparatus used to generate money over opposition to Rep. Alexandria Ocasio-Cortez, D-N.Y.

Neither Aguero nor DiGiovanna responded to a request for comment. Both Aguero and DiGiovanna are active in libertarian politics and appeared in a photo posted on Facebook with others who testified at the June 25 hearing in opposition to AB 44. Aguero ran unsuccessfully for a State Assembly seat as a Libertarian Party candidate in 2017. DiGiovanna is a West Coast officer with Young Americans for Liberty, the libertarian youth group led by Maloney.

The funding from fur supporters has roiled not only the debate in California, but also in New York City, which is considering a ban on fur products. In May, busloads of opponents to the fur ban appeared at a New York City Council hearing to shout down the proposal.

Rev. Johnnie Green, a Harlem pastor for Mount Neboh Baptist Church, posted on Twitter offering the chance to win a $250 American Express gift card in connection to the council hearing. The tweet was deleted after Jabari Brisport, a community activist and teacher who serves on the board of Voters for Animal Rights, called attention to it.

In New York, the Fur Information Council has contracted a number of influential lobbyists to defeat the proposed ban, which is still under consideration by the city council. Records show that the industry has retained the services of SKDKnickerbocker, a prominent Democratic lobbying firm.

Green has also made divisive comments on the legislation. “A ban on fur is a ban on black culture,” he wrote in one column, arguing that the ban fits “a pattern throughout history, of Blacks being told what rights they can and cannot have by the White majority.” Green did not respond to a request for comment.

Animal rights activists argue that the fur industry is inherently inhumane and is throwing the proverbial kitchen sink as a distraction.

“This ban is absolutely not an issue of race at all. It has nothing to do with black culture or the African-American community. It’s a ban on animal cruelty,” said Stewart Mitchell, an organizer with Voters for Animal Rights. “I’m an animal rights activist who happens to be black,” he added.

In New York, the Fur Information Council has contracted a number of influential lobbyists to defeat the proposed ban.

“The fur bans in Berkeley, San Francisco, and now California are all being led by people of color,” said Wayne Hsiung, co-founder of DxE, the largest group testifying in support of AB 44 on Tuesday. “And the anti-fur movement has incredible support from communities of color. As people who have experienced oppression, we know how important it is to challenge systemic forms of abuse — rather than clinging to outdated and oppressive traditions.”

The California legislation contains exemptions for Indigenous tribes that use furs for religious ceremonies, and allows hunters to skin animals they catch while hunting. Assembly Member Laura Friedman made clear that the bill is tailored to suppress the industrial fur farms that raise caged animals, such as bobcats, foxes, and minks. Independent investigators have found signs of fearfulness, self-mutilation, and cannibalism by caged animals held in fur production houses.

At the hearing on Tuesday, over 100 people arrived in Sacramento to show their support for AB 44. At one end of the hallway, a diverse group of animal rights activists, many wearing blue DxE shirts, crowded the passageway waiting to testify in support of the bill.

On the other side of the hallway into the Senate Judiciary Committee room, a group of fur lobbyists and fur retailers, along with a contingent of largely high school and college students, huddled, awaiting their turn to speak in opposition. William Duplissea, a former Assembly member who now works as a contract lobbyist for the fur industry, denied knowing of any paid protesters or activists.

But one high school student who testified in opposition to AB 44 said she had been paid to appear, nodding when asked if she had been paid through Mobilize the Message. She then declined to comment or give her name. Several students who protested the bill said they were instructed not to talk to the press.

Other fur industry professionals standing around waiting to testify saw the legislative effort as a move to destroy their way of life.

Steven Zaslaw, a fur designer who runs a fur company in Monrovia, Calif., said that opponents had not considered the unintended consequences of the ban, which he said could push consumers to Chinese furs that are produced with lower standards, or that the microfibers used in clothing could be harmful to the environment. Zaslaw and other fur industry individuals told The Intercept that they were disappointed that they were not receiving adequate time to debate the issue.

David Appel, a fur dealer from Beverly Hills, went further, claiming that the animal rights activists were secretly funded by the oil industry, given that many synthetic fur alternatives are manufactured through petroleum-based polymers.

Hsiung of DxE roundly rejected that claim. “Animal agriculture has a pattern of using deception and deflection,” Hsiung said. “We don’t work for the faux fur industry. We work for the animals and the earth.”

Julie Waldroup, another activist with DxE, argued that fur products contain “toxic, carcinogenic chemicals to keep the skin” from rotting, and questioned the claim that fur had any environmental benefits.

Appel, one of the fur businessmen at the hearing, conceded that the fur industry has deployed the race issue strategically. “For the purpose of politics, they made it a race issue,” said Appel, citing the industry’s experience in New York. “So if a council member is supporting this, and he’s going against his black constituents who go to church and wear furs and so forth, they’re going to be against him next time he wants to get voted in.”

Appel shrugged and noted that there was nothing cynical about “creating a race issue” because “poor people who have lived all their lives down aspire to become affluent.” Appel continued, “What example do they show their kids that they have succeeded, that they have made it out of the welfare life? By wearing beautiful furs, driving nice cars, it’s part of how they encourage their kids to come out of the slums.”

Daniel Wachtenheim, another fur retailer from Los Angeles, said he was disappointed in the Senate committee vote advancing the bill, but said it went about as well as he expected.

“Yeah, they bused people up. Paid them. It’s a numbers game,” Wachtenheim said, leaving the state capitol building after the hearing. “For me,” he added, “it’s about my business, I have to be here.”