“Do We Believe in Asylum? If We Do, We Need to Stop This Rule”: Trump Policy Upends Protections at U.S.-Mexico Border

A new rule bars asylum for people who passed through another country on the way to the U.S. Advocates call it “plainly illegal.” 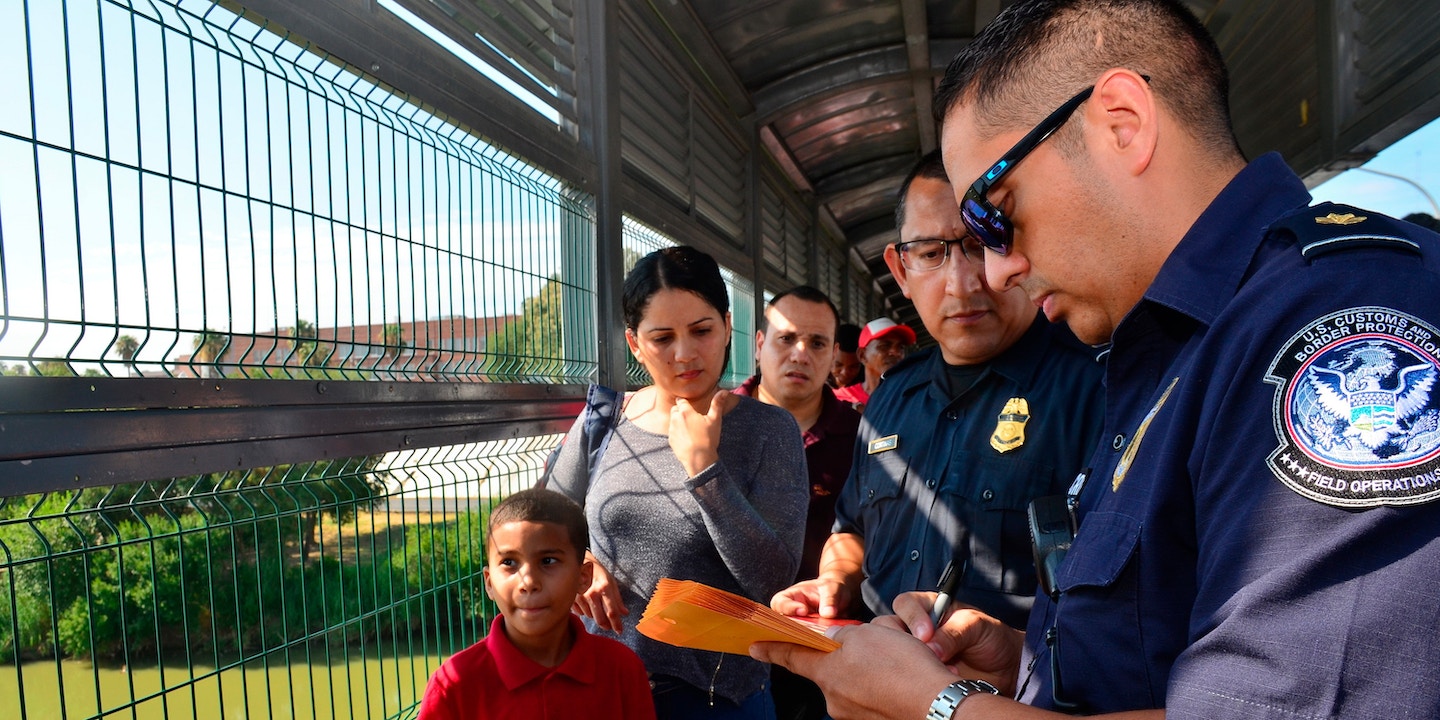 This week, the Trump administration announced an unprecedented rule that would deny tens of thousands of asylum-seekers the chance to find refuge in the United States, imposing a bar to asylum for anybody who has passed through another country without applying for protection and being denied it there. The rule went into effect Tuesday, the day after it was announced, and set off an immediate storm of criticism and outcry.

Heather Axford, an attorney with Central American Legal Assistance, told The Intercept that the rule would apply to almost all of her clients. Axford described the case of Blanca — a pseudonym — who fled El Salvador after she had been “green lit” to be killed by MS-13 because she had testified against the gang members who had murdered her uncle. Blanca initially went to Mexico but was tracked down by a woman from MS-13 in the migrant shelter where she was staying. Blanca and her infant daughter were forced to continue their flight to the United States, where, this March, she was granted asylum. Axford put it simply: “She should not be required to seek asylum in Mexico if she has not found safe haven there.”

Another Central American woman, Elizabet, from Guatemala, has been waiting in Nogales, Mexico, with her 2-year-old daughter for their turn to present at the U.S. border and ask for asylum. Elizabet — who fled domestic abuse in her husband’s household for her mother’s farm but couldn’t survive on their meager, climate-afflicted crops — has been waiting since April for their number to be called under the system of “metering,” which limits the number of asylum-seekers who can approach U.S. officials each day. According to the Kino Border Initiative, the aid and advocacy group who shared her story with me, Elizabet’s number was likely due to come up next week. Having passed through Mexico, however, under the new regulation she and her daughter are no longer eligible for asylum.

“This new rule is patently unlawful and we will sue swiftly.”

The 58-page new rule is “so plainly illegal,” said Kerri Talbot, director of federal advocacy at the Immigration Hub, that attorneys expect it to be quickly blocked in the courts. That was the fate of the first “asylum ban,” issued last November, which would have eliminated asylum for anyone who applied after crossing the border between ports of entry, and which never went into effect.

But asylum-seekers and immigration advocates might be wary of relying on the courts to rein in the Trump administration’s anti-asylum animus, as the administration has successfully instituted a number of policies to outsource immigration enforcement to Mexico. The so-called Migrant Protection Protocols endanger asylum-seekers by forcing them to await the processing of their claims in Mexican border towns, and generally restrict access to asylum. Nonetheless, Lee Gelernt, deputy director of the Immigrants’ Rights Project at the American Civil Liberties Union, promised, “This new rule is patently unlawful and we will sue swiftly.”

That seems pretty clear, but there are some exceptions, one of which is a “safe third country” agreement. The U.S. has one with Canada, which deems both Canada and the U.S. “safe” and limits asylum-seekers from seeking protection in one country if they have already been in the other. For months, the U.S. has been trying to strong-arm Mexico into signing such an agreement, and recently seemed on the verge of convincing Guatemala to do the same. But this past Sunday, the day before heading to Washington, embattled outgoing Guatemalan President Jimmy Morales bailed on the potential deal amid outcry and legal challenges in Guatemala. Though the new regulation is different than a safe third country agreement, it effectively, and unilaterally, imposes such an “agreement” on any country a potential asylum-seeker has entered while en route to the U.S. Though it will mostly affect Central Americans, there are also increasing numbers of asylum-seekers from Africa, south Asia, Venezuela, and Caribbean countries who pass through Mexico and will be deemed ineligible for asylum if they arrive to the United States.

The latest executive ukase would not take into account the validity or strength of any asylum claim from someone who has passed through a third country before reaching the U.S. They could be fleeing irrefutable racial, religious, or political persecution, among other dangers, and simply because they stepped foot in Mexico, they would be automatically denied.

Tens of thousands of people a year would be impacted if the new ban were fully implemented. In 2017, there were nearly 120,000 defensive asylum applications (when someone claims asylum to try to prevent their being deported), many of them from people who had crossed the U.S.-Mexico border or presented at ports of entry. And that number doesn’t include many of the children who are already in the U.S. and can make affirmative asylum claims, who would also be affected by the ban. So far this fiscal year, Border Patrol has arrested 363,300 family members from Honduras, El Salvador, and Guatemala — none of whom, under the new rule, would be eligible for asylum.

Besides seeming to baldly disregard U.S. law, the regulation also is, according to Eleanor Acer, director of refugee protection of Human Rights First, in “direct violation” of the U.N. Refugee Convention and its 1967 protocol, the latter of which the U.S. is a signatory to. The U.N. refugee agency itself issued a statement that they were “deeply concerned with this measure.”

The U.S. claims an intractable crisis, bemoaning “an extraordinary strain on the nation’s immigration system.” Yet even Uganda hosts more refugees than the United States.

The U.S. government claims an intractable crisis, bemoaning, in the text of the new rule, “an extraordinary strain on the nation’s immigration system.” Yet, the country that hosts the most refugees in the world is Turkey, followed by Jordan, Lebanon, and Pakistan. Even Uganda hosts more refugees than the United States. Though the number of people arriving to the U.S. at its southern border has gone up in recent years, overall, fewer people are coming than in the early 2000s. The recent increase stems in large part from countries where the U.S. has played, and continues to play, a heavy hand in destabilization: whether through economic exploitation, military intervention, or as a driver of climate change.

Attorney General William Barr, while calling the U.S. a “generous country,” said that the new rule would “decrease forum shopping by economic migrants and those who seek to exploit our asylum system to obtain entry to the United States—while ensuring that no one is removed from the United States who is more likely than not to be tortured or persecuted on account of a protected ground.” He was referring to the fact that asylum-seekers who still manage to make it to the U.S.-Mexico border will remain eligible for other forms of relief, including “withholding of removal” (temporary protection against being sent back to a country where you’re in danger) and the Convention Against Torture, or CAT (similar to withholding, but specific to cases where torture is likely). Both these forms of protection, however, have significantly higher burdens of proof than asylum and are much more limited. Neither offers pathways to citizenship, and they both prohibit family reunification and foreign travel. Plus, unlike asylum, the government can pull the protections of both withholding of removal and CAT.

For the majority of those who seek asylum by approaching the U.S. southern border, protection is simply nowhere else within reach. Mexico itself has a strained asylum system, has significantly cut funding in the past year, and remains a dangerous place to await a claim. María Hernández, of Médicos Sin Fronteras in Mexico, told me, “Asylum seekers [in Mexico] are exposed to violence, to rapes, kidnappings, homicides.” There have already been reported cases of rape and kidnapping of people enrolled in the Trump administration’s Migrant Protection Protocols, commonly referred to as “Remain in Mexico,” which force many asylum-seekers to wait in Mexico until their court dates.

Guatemala, the other country many refugees have to pass through on their way to the U.S., and where they may now be forced to stake a claim, is neither safe nor able to process asylum claims. In 2018, Guatemala only approved a total of only 20 claims, and only has 12 officials who work on the asylum process, according to Human Rights First. And Guatemala itself is a main source of migration from Central America, due to violence, corruption, poverty, and climate factors; in the 2019 fiscal year, Border Patrol has also apprehended more families and unaccompanied children from Guatemala than from any other country of origin.

The new regulation’s challenge to long-enshrined protections is existential, advocates say. As Keren Zwick, attorney at National Immigrant Justice Center, put it, “Do we believe in asylum? If we do, we need to stop this rule.”