A Syrian Mother’s Letter to Her Daughter, “For Sama” Shows War in an Unusually Intimate Light

Filmmaker Waad Al-Kateab wanted to document the war so her newborn child could “understand what we were fighting for.” For the majority of Western audiences, the region known as “the Middle East” is conceived as a vast swath of constant and inscrutable chaos. In this imagination, diverse conflicts, insurgencies, and civilian revolutions are flattened into a single horrorscape, represented by ubiquitous images of billowing smoke and colorless destruction. Violence, it would appear, is endemic to the region, as natural and inevitable as the endless, hostile desert.

This lack of historicity — and subsequent denial of responsibility — can be partly blamed on Western media that rewards sensationalist, reductionist headlines over nuance. Meanwhile, many residents of the region, including those living in conflict zones, are denied any semblance of free, accurate media coverage, with local mainstream outlets trafficking in government propaganda. In both scenarios, the voices of “ordinary” citizens are deplorably, and dangerously, absent. This dual shortfall is what filmmakers Waad al-Kateab and Edward Watts sought to remedy in their new documentary “For Sama,” which opens this weekend in some cities, and which will air later on Frontline PBS. The film’s poster plays with stereotype: a woman stands against a backdrop of wrecked buildings and rubble. Her stoic face and dismal surroundings evoke routine associations of tragedy, yet the image contains an unexpected detail: An infant girl, fresh-faced and wide-eyed, gazes up from the carrier strapped to her mother’s chest. She is the eponymous Sama, al-Kateab’s firstborn, whose birth and early years frame a film that is once a maternal love letter and the story of a revolution. “Sama, I’ve made this film for you,” says al-Kateab in a voiceover. “I need you to understand what we were fighting for.”

It is this framing that sets “For Sama” apart from so many war documentaries. The majority of the film centers on the confined, harrowing life of al-Kateab’s young family during the siege of East Aleppo by Syrian government forces in 2016. She restricts herself to a limited cast of characters — a team of doctors and activists running a makeshift hospital, and one household from her neighborhood — thus forcing audiences into the cloistered, tense reality of the war’s daily, deadening grind.

This intimate approach was al-Kateab’s way of disrupting, and expanding, conventional coverage of her people. “I never felt represented in the news stories about Syria,” said al-Kateab in an interview with The Intercept. “There is no human sense in those reports. They talk about a ‘war’ and people think armies, front lines, tanks — but it’s not like that. This is not two equal sides fighting each other. It’s about people fighting for a better life, for freedom, and armies that want to destroy them.”

The narrative, character-driven scope of the film by no means precludes the political dimensions of Syria’s conflict. Al-Kateab became invested early on in the civilian uprisings against Syrian President Bashar Assad, and was led to journalism through her involvement in the streets. The film’s earliest scenes show 18-year-old al-Kateab as a young activist, riding the initial wave of euphoric hope that overtakes Aleppo University, where she was studying when the revolution began. She soon begins shooting amateur footage of protests and rallies — first on her phone, then on borrowed cameras, and eventually, her own.

The story soon turns from ebullient campus protests to the darkening, and increasingly violent, events of the regime’s backlash. When the rebel contingent is beaten back into East Aleppo, al-Kateab chooses to follow, alongside a small group of young freedom fighters and volunteer doctors. Amidst an escalating campaign of bombings by regime and Russian forces, the group erects a small, makeshift hospital, tending to the wounded under increasingly dire conditions.

“I don’t believe in sheltering people. These things are happening!”

The film is frequently excruciating to watch. Shots of falling mortars cut to scenes of pandemonium in the hospital, where doctors clamber over bloodstained floors, struggling to save the mangled victims that flood in minutes after each blast. Al-Kateab records it all in the frame of her hand-held camera, refusing to flinch from images far more horrific than most Western audiences are accustomed to seeing.

The filmmakers’ decision to include these more shocking scenes was a deliberate departure from the sanitizing distance they saw in most mainstream Western journalism. Al-Kateab and Watts have little patience for debates about the “appropriateness” of showing the more gruesome aspects of war. “I don’t believe in sheltering people,” said al-Kateab. “These things are happening! Giving people the option of ignoring it is wrong. Children are dying, hospitals are being bombed, and these horrors are going on still, in places like Idlib.”

Originally, al-Kateab set out to capture these scenes in an effort to create a body of evidence she hoped would one day help indict the regime. “I really didn’t feel we’d make it out of Aleppo alive,” she said, “so I thought, the least I can do is leave a record so one day, when Assad is brought to justice, there will be proof of all his crimes.” The resulting archive totaled over 500 hours of footage, ranging from personal, diary-like entries from al-Kateab’s makeshift bedroom and the regime’s campaign against civilians and hospitals to shots of post-shelling rescue operations undertaken beneath a still-rumbling sky.

Some of the most striking footage comes in the film’s quietest moments. In one, al-Kateab is cuddling with her newborn when the idyllic scene is disrupted by the sound of nearby shelling. She coos, “There’s lots of airstrikes today, right? But we haven’t been hit, yay!” In another scene, a shot of pink-cheeked Sama pans to the grey-blue body of a dead boy of roughly the same age.

“I am not just a woman,” al-Kateab said of these intimate scenes, “but this was one of the main ways I experienced the conflict — as a woman, as a mother. I see that baby boy, dead, and of course I’m thinking: That could be Sama. I could be the mother of a dead baby. I could die myself at any moment. I had to show that moment, that feeling.” 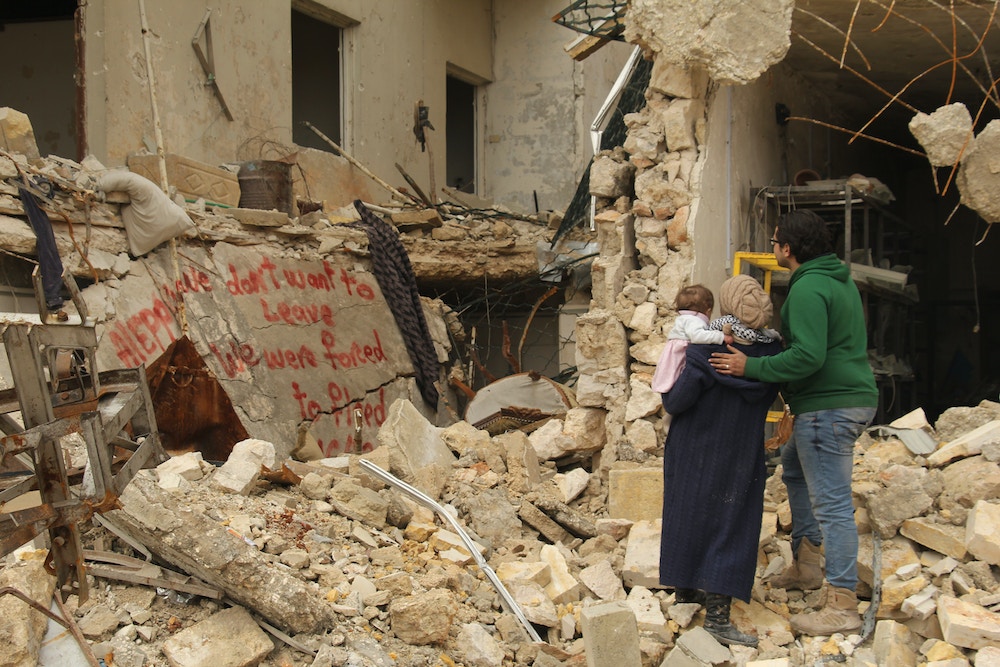 Waad, Hamza, and Sama al-Kateab look at graffiti they painted on a bombed-out building, protesting the forced exile of the civilian population in East Aleppo by the Syrian regime and their Russian and Iranian allies in Dec. 2016.

The juxtaposition of tenderness and horror throughout the film shows the stakes of the Syrian conflict in their inescapably personal dimensions. This felt essential to al-Kateab and Watts, who both recognize the fatigue felt by many in the West over the issue of Syria. Watts hopes the film will render the “conflict” into more tangible, and human, terms. “People have a very vague attitude about Syria and about the Middle East in general — a sense that the wars are like natural disasters, just sweeping in with no context, no reason,” said Watts. “We want to change that.”

“People have a very vague attitude about Syria and about the Middle East in general — a sense that the wars are like natural disasters, just sweeping in with no context, no reason.”

Another primary “character” looms just beyond the frame of al-Kateab’s film: the international community, personified in the NGOs and rapporteurs who correspond with the hospital team from beyond Aleppo’s besieged borders. Al-Kateab’s husband, Hamza al-Kateab, is the point of contact for many of these conversations, conducting late-night media interviews and consultations with negotiators on his cellphone. In these interactions, too, the question of efficacy arises. “I spent hours and hours speaking to them — journalists, [World Health Organization], the U.N. — but I don’t know if it made a difference,” Hamza said in an interview with The Intercept. “It didn’t seem like the media reports were making any impact on policymakers. And NGOs seemed to have a very set idea of the ‘right’ way to ‘solve’ a conflict — they didn’t listen much to our wishes.”

Throughout the conflict, the hospital staff and activists had one primary request, which went unheeded, said Hamza: “Please, if you want to help, just get Assad out of power. After that, the Syrians will take care of Syria.” Instead, he said, the international community “negotiated with the regime. Meanwhile, the regime was slaughtering us.”

The greatest disappointment of all, say the al-Kateabs, was the forced evacuation of their city in 2016, which felt tantamount to defeat. “That pain was worse than anything we experienced the entire war,” said Waad al-Kateab. “Leaving our home, after fighting for it for so long broke our hearts. The U.N. negotiators said they were ‘saving Aleppo’ and yet they played right into the regime’s hands.”

The al-Kateabs are now living as refugees in the U.K. They say the warm reception of their film has given them a renewed sense of agency, and even hope. “What we didn’t expect was how many people would ask us, after watching the film, ‘What can we do?’” says Waad, her voice rising with excitement. In response, the al-Kateabs plan to launch awareness and advocacy campaigns about the Assad regime’s bombing of hospitals, and to address the plight of Syrian refugees.

“No one grows up dreaming of being a refugee,” said Hamza, who has been unable to practice as a doctor since leaving his country. Waad added, “We want people to understand that each refugee is an individual with a story. There are reasons these people are refugees — they are fleeing danger, and just want a better life for themselves and their families.” The al-Kateabs continue to call, openly and unequivocally, for the removal of the Assad regime, while nurturing hopes of returning one day. “It might not happen in five years, or 10 years, but we have to believe we will go back,” said Waad. Hamza agreed, “If Assad is allowed to win, if the world refuses to bring him to justice — we are living in a terrible world. We can’t let ourselves believe that’s true.”

“If I had one message, it would be this,” he added. “Don’t turn your back on Syria.”