The Pentagon Is Reporting Low Civilian Death Tolls in Syria and Iraq. Without Accountability, People Will Keep Dying.

The Pentagon says the U.S. killed 120 civilians in all its wars last year. But Amnesty International and Airwars said at least 821 died in Syria and Iraq alone. 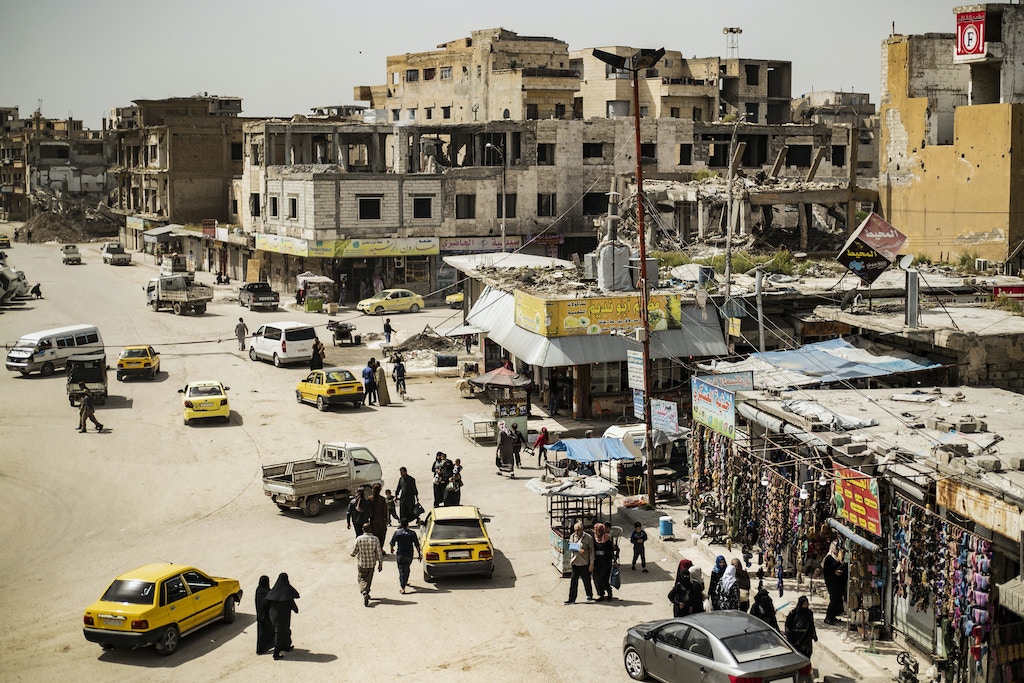 A market street in the northern Syrian city of Raqqa, the former Syrian capital of the Islamic State group, on April 14, 2019.

Last Thursday, the Department of Defense released a report to Congress laying out its latest data for civilian casualties caused by U.S. military operations. For a Syrian American like me, this is not a mere list of faceless statistics but an opportunity for the U.S. to finally reckon with reality and accept long overdue responsibility for U.S.-led coalition actions in Raqqa, Syria. Not surprisingly, the Defense Department’s report fails to do so.

By continuing to significantly underreport civilian casualties, the Trump administration abdicates responsibility for human rights violations and potential war crimes in Raqqa and other theaters.

The Defense Department reported that approximately 793 civilians were killed by the U.S.-led coalition in Iraq and Syria during its fight to uproot the self-described Islamic State in Iraq and Syria, known as ISIS, in 2017. While the report lists a higher number of civilian casualties in 2017 than had been previously reported, the figures pale in comparison to findings from an unprecedented joint investigation by Amnesty International and Airwars, which concluded that the U.S.-led coalition killed at least 1,600 civilians in Raqqa during just four months in 2017. The 2018 figures are similarly asymmetrical. The Pentagon’s assessment reports 120 total civilian deaths as a result of U.S. military operations in Iraq, Syria, Afghanistan, and Somalia, while Airwars found that the U.S.-led coalition killed between 821 and 1,712 civilians in Iraq and Syria alone.

By continuing to significantly underreport civilian casualties, the Trump administration abdicates responsibility for human rights violations and potential war crimes in Raqqa and other theaters. And by failing to reckon with its inability to protect civilians, the United States cannot use these mistakes to reorient wider U.S. policies towards safeguarding the well-being of people. Instead, the U.S. is poised to continue relying on the disproportional use of military force — and so the civilian death toll will continue to rise.

For those, like my family, who remember Raqqa as it was before ISIS’s occupation and the city’s “liberation” by the U.S.-led coalition, the Pentagon’s fiction is immediately transparent. When my father recalls the Raqqa of his youth, he describes the large pots of coffee brewed in every house and the plastic chairs set out on the street after dawn prayers for visitors. Like most people in the neighborhood, his own father used to stop at several houses on the way to his medical clinic, topping up his mug and chatting with friends before continuing on his way.

Today, thousands of those homes are destroyed and the streets are piled with rubble. Entire neighborhoods are abandoned and whole families decimated. The United States, in partnership with French and British forces, is partly responsible for this destruction. According to Amnesty International and Airwars, airstrikes caused buildings to collapse on top of families huddled in basements seeking shelter. Boats loaded with refugees seeking to escape were targeted as they attempted to cross the Euphrates River to safety. Amnesty found that “civilians were caught in the crossfire in a city that had become a death trap. IS snipers and landmines prevented them from fleeing, while the Coalition’s air bombardments and reckless artillery strikes killed them in their homes.”

The death toll in Raqqa is staggering. If you recited one victim’s name a minute, it would take you almost 27 hours.

The death toll in Raqqa is staggering. If you recited one victim’s name a minute, it would take you almost 27 hours.

ISIS’s brutality does not justify or forgive the crimes the U.S.-led coalition committed in waging its “war of annihilation” against the group. According to Amnesty International and Airwars, the U.S.-led coalition violated the fundamental principle of proportionality and international humanitarian law’s requirement that armed forces distinguish between military targets and civilians.

For survivors in Raqqa, like my family members and friends, the United States will never be able to reunite loved ones, restore homes, nor heal the trauma of the bombardment. The very least the U.S. can do is accept reality, offer victims deserved justice, and begin taking the necessary steps to help survivors painfully rebuild what they can of their lives.

Instead, the U.S.-led coalition continues to deny responsibility for this failure to protect civilians from harm by failing to report the true scope of casualties. Images of the destruction in Raqqa — where the U.S. fired more rounds in five months than “any other Marine artillery battalion since the Vietnam War” — reveal the absurdity of the Defense Department’s claim to relatively limited civilian deaths. It also exposes the folly of one senior U.S. military official’s assertion that the bombardment of an urban center like Raqqa constituted one of the most “precise” air campaigns in the “history of warfare.”

If the U.S. refuses to admit its mistakes, it cannot hope to learn from them. U.S. actions in Raqqa are not an anomaly — rather, they are part of a systematic failure to protect civilians in multiple theaters. For example, in Afghanistan, the government and its American allies killed more civilians than the Taliban during the first quarter of this year. The U.S. military and other international actors continue to back the Saudi-led coalition in Yemen despite the similarly ruinous results of that air campaign.

The devastation of our military-first approach to eradicate ISIS in Raqqa should serve as a shock to U.S. policy as it sleepwalks into another year of endless war.

Yet that transformation seems unlikely. The Trump administration has demonstrated little concern for the aftermath of its actions in Raqqa. The United States could renew the $230 million of promised stabilization aid to Syria for the cost of just 17 of the more than 1,000 days of military operations against ISIS in Iraq and Syria. That vital aid could clear rubble, fix water systems, disarm unexploded mines, and facilitate reconstruction. Instead of taking responsibility, Trump froze these funds last year and proposes zeroing out all new U.S. funding for Syria’s stabilization in his 2020 budget request.

For all its claims of liberation and saving civilians, the evidence makes clear that the U.S.-led coalition failed in spectacular fashion. Rather than continue to deny the obvious to avoid accountability, those in charge of those operations must stand before the American people and explain why. While the Defense Department’s annual report to Congress is a welcome step towards transparency, there are still important gaps that must be addressed. Members of Congress should not just take the Defense Department at its word. They must instead conduct rigorous oversight to reckon with our role in places like Raqqa and hold those responsible for U.S. human rights violations to account.

From the trauma of ISIS occupation to the U.S.-led coalition bombardment, the Raqqa of my father’s youth may never be restored. But the U.S. must do all in its power to undo the harm it itself inflicted. That begins by finally offering victims justice, such as reparations, in Raqqa and all other places. Unless the U.S. finally takes responsibility for the civilian costs of its military-first foreign policy, it will be doomed to repeat the very same mistakes over and over again.