Amnesty International and Airwars offer the most methodical estimate to date of the death toll from the U.S.-led battle to retake the city from ISIS. 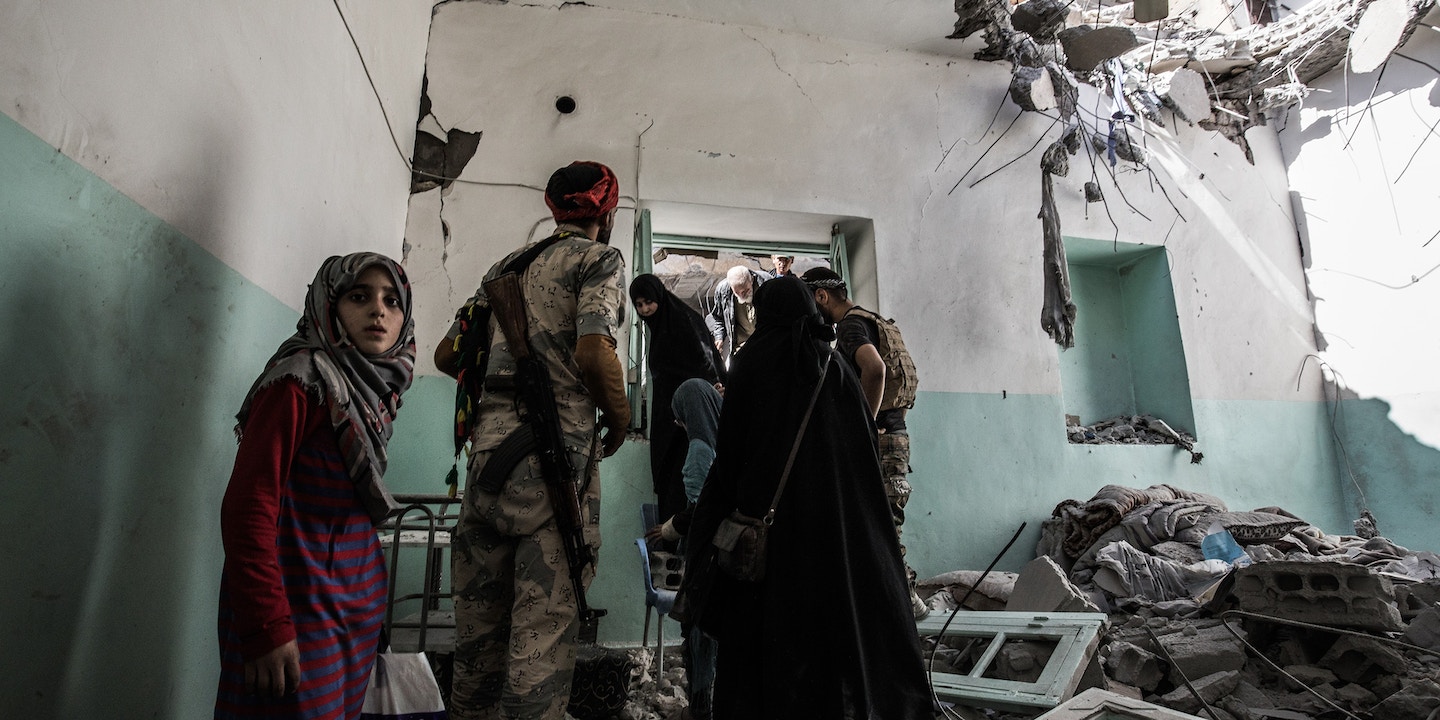 On the morning of September 5, 2017, Mohannad al-Tadfi rushed over to his brother’s six-story apartment building in Raqqa, Syria. Mohannad’s brother, Lattuf, lived on the ground floor with his wife, Samiha, their six children, and his mother, Amina. Other families had fled the city, leaving the building mostly vacant, but Amina was bedridden from diabetes, and medicine was in short supply.

“I had managed to find some insulin for my mother and I rushed over to bring it to her,” Mohannad told researchers from the human rights group Amnesty International. “I was planning to return later that day with my wife and children to wait for the area to be liberated” from the Islamic State, which had made Raqqa the capital of its self-declared caliphate.

But two hours after Mohannad left his mother’s side, an airstrike by the U.S.-led coalition destroyed the apartment building, killing Lattuf’s entire family.

Mohannad al-Tadfi is one of more than 400 witnesses or survivors interviewed by Amnesty International, which, along with the monitoring group Airwars, released their most comprehensive report Thursday on the coalition’s air and artillery campaign during the four-month offensive to retake the city in 2017.

The groups found that coalition strikes killed at least 1,600 civilians. Amnesty researchers in Syria were able to directly verify 641 of those deaths and said there were “very strong, multiple source reports” for the rest. The groups were able to collect the names of more than 1,000 civilians killed.

The findings, published along with an interactive database based on two years of on-the-ground investigations, provide the most methodical estimate to date of the death toll from coalition bombing, even as Pentagon officials continue to downplay the damage of the U.S.-led air campaign.

“I didn’t come to Raqqa with any preconceived ideas of what had or had not happened,” Donatella Rovera, a crisis investigator for Amnesty, said in a video released by the group. “But what I came to discover is that little to no protection was afforded to the thousands of civilians who were trapped in the city.”

ISIS lost control of Raqqa in October 2017, when the city was recaptured by the U.S.-backed Syrian Democratic Forces in what was hailed a key milestone in reclaiming territory once held by the terror group. But four years of ISIS rule and four months of fighting left the city in ruins, with more than 11,000 buildings destroyed. During the fighting, ISIS used booby traps, land mines, and snipers to prevent civilians from fleeing, trapping thousands of people and leaving them vulnerable to what former Defense Secretary James Mattis called “annihilation tactics.”

“The public deserves to know how many civilian casualties our government is responsible for, and the survivors deserve acknowledgement, reparations, where appropriate, and meaningful assistance to rebuild their lives,” said Daphne Eviatar, director of the Security With Human Rights program at Amnesty International USA.

According to a statement from Amnesty, the groups regularly engage with the U.S., U.K., and French militaries about civilian casualties. As a result, the coalition has admitted responsibility for killing 159 civilians in Raqqa, but the U.S. has dismissed most of the allegations as “non-credible.”

In 2017, Gen. Stephen Townsend, then the commander of the task force leading the fight against ISIS, wrote in Foreign Policy that the U.S. conducts thorough assessments, which have shown that less than 1 percent of airstrikes result in “a credible report” of civilian casualties.

“Assertions by Airwars, along with claims by the Syrian Observatory for Human Rights and media outlets that cite them, are often unsupported by fact and serve only to strengthen the Islamic State’s hold on civilians, placing civilians at greater risk,” Townsend wrote.

However, monitoring groups have pointed out that it is extremely rare for U.S. personnel to interview eyewitnesses or victims of airstrikes, and they are only likely to concede civilian casualties that are observable by their own intelligence feeds. As a result, over the course of the U.S. anti-ISIS campaign, Airwars estimates that more than 7,700 civilians have been killed in Iraq and Syria, while as of March, the Pentagon estimated fewer than 1,300 deaths.

“Essentially what I’ve been doing here is the work that the coalition should be doing,” Rovera says in the Amnesty video. “They have been bombarding the city. They should be here looking at the impact that that has had on the civilian population.”

The Trump administration has looked to other countries to provide recovery funding for cities like Raqqa and Mosul. In March 2018, the White House put a freeze on more than $200 million the State Department had set aside for Syrian reconstruction under former Secretary of State Rex Tillerson. The administration later informed Congress that money would be reallocated to “other, unspecified areas,” according to the Washington Post.