Oil companies and centrist Democrats have started to sound a lot alike on climate policy. 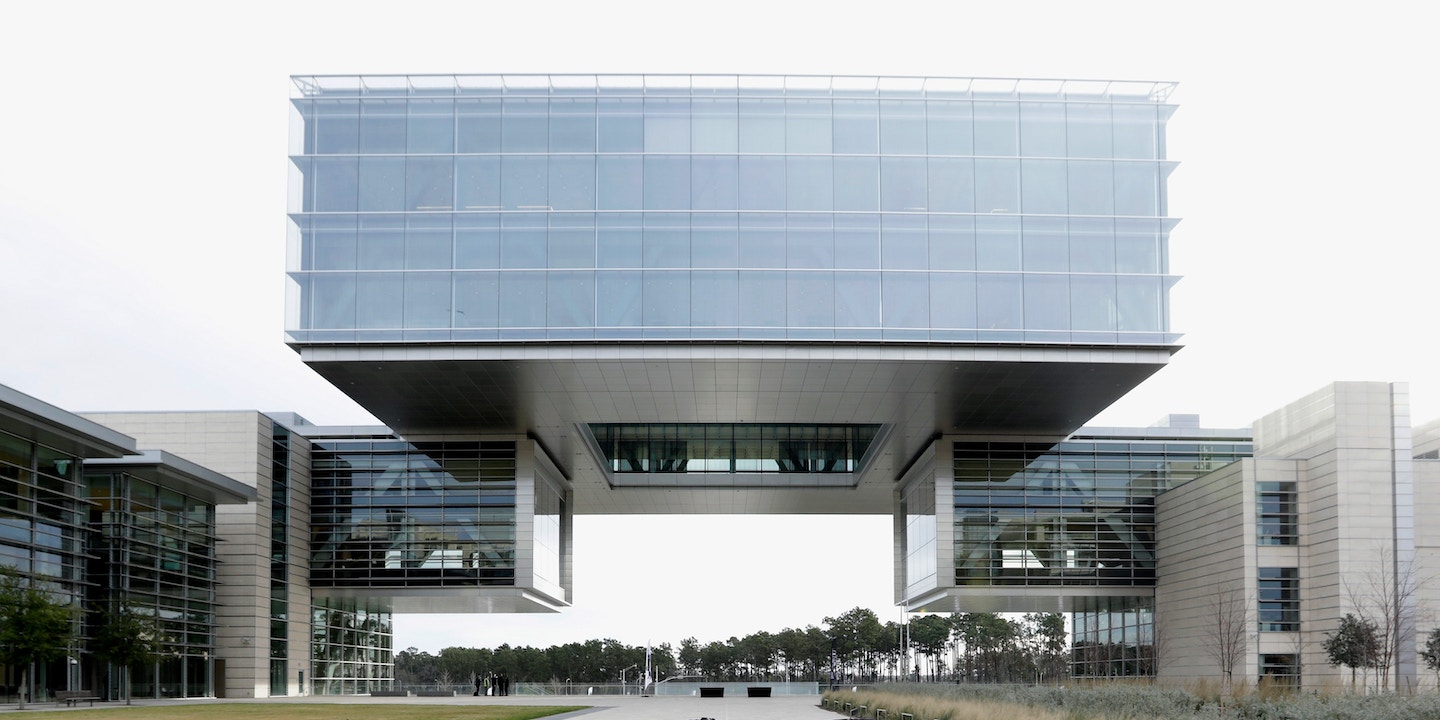 The Progressive Policy Institute, a centrist Democratic think tank that grew out of the party’s pro-business wing in the 1980s and ’90s, received $50,000 from Exxon Mobil in 2018 via its parent organization, the Third Way Foundation, according to the oil giant’s 2018 Worldwide Giving Report.

Exxon Mobil did not return The Intercept’s multiple requests for comment. In an email, PPI Executive Director Lindsay Lewis said the money was used for general support and that “we only accept general support funding from corporate interests, we do not do paid for work/research or have any donor run programs.”

Lewis also confirmed that this is the first time Exxon Mobil has donated to the Third Way Foundation.

Though it’s a first, PPI’s new donor isn’t so dramatic a shift from its fundraising record. The Intercept’s Akela Lacy has also found that PhRMA — the Pharmaceutical Research and Manufacturers of America — has annually donated between $25,000 and $75,000 to the Third Way Foundation since 2009, upping its donation to $265,000 in 2016 — the same year that Medicare for All, which the trade group and PPI both oppose, entered the national spotlight. Donations dipped back to normal levels in 2017, although documents were not yet available for 2018 when the piece was published in late April.

In the last couple years, Exxon has taken up softer messaging on climate than either the Koch brothers or the Mercer family. With business all over the world, Exxon — like every other multinational oil company — is well-accustomed to operating in environments where denying the reality of the climate emergency outright is politically unthinkable. As climate concerns spike around the U.S., the company is still plenty opposed to environmental regulations and the lawsuits being lobbed its way from climate-vulnerable communities and attorneys general, who are each calling into question Exxon’s rule in fueling both the climate crisis and misinformation campaigns about it. Rather than paying people to say that there’s no problem at all, it can rebrand as a good-faith actor in the climate fight with paeans to carbon capture technology, low-carbon fuels (algae!), and carbon taxes that also conveniently exempt it from some of the lawsuits and regulations it’s most worried about. The decades of climate denial Exxon helped fund — and now the Trump administration — have dragged the national debate on climate change so far into the gutter that there are influential liberals willing to give the company credit simply for not denying the science.

This all dovetails well with a centrist approach to climate politics that’s long sought common ground with industry and harbors both temperamental and ideological opposition to big, confrontational proposals like the Green New Deal. The upshot is that they’ve started to sound a lot alike. Carbon capture, R&D, and carbon pricing — while not mutually exclusive with the Green New Deal framework that the Sunrise Movement, Rep. Alexandria Ocasio-Cortez, and others have begun to flesh out — have reliably been wielded as a cudgel by establishment types against calls for more sweeping action.

Kert Davies, founder and director of the Climate Investigations Center, noted that the report indicates the money PPI received was through a “corporate” grant, rather than through the ExxonMobil Foundation. “We have never sussed how these two black boxes of money are managed or dolled out. So if you grab the ExxonMobil Foundation 990s, there are sometimes different descriptions or breakdowns of the funding, but this grant won’t be there,” he wrote in an email. “There is no need for public accounting of such grants. No obligation. But they have seemed compelled to disclosed them through the years.”

Of course, $50,000 is not an enormous amount of money either for PPI or Exxon Mobil. But it may well signal a shift in the fossil fuel industry’s relationship to climate politics.

$50,000 is not an enormous amount of money either for PPI or Exxon Mobil. But it may well signal a shift in the fossil fuel industry’s relationship to climate politics.

For years, Exxon Mobil prolifically funded climate denier groups like the Heartland Institute and Competitive Enterprise Institute. Under pressure, the company pledged to stop funding deniers in 2007, although it kept bankrolling politicians who deny the reality of the climate crisis. Exxon also still support right-wing think tanks like the Manhattan Institute, which received $970,200 from Exxon between 2008 and 2018. As recently as 2011, MI Senior Fellow Robert Bryce said “the science is not settled” on climate change. Another MI Senior Fellow, Oren Cass, last year — the year after three of the five most expensive hurricanes to have ever hit the Atlantic — authored a report arguing that the potential costs of climate change are overblown, suggesting that many people prefer warmer temperatures and could adapt easily to global warming. In addition to Exxon, MI is — like other flagrant denier groups — funded by the Mercer Family Foundation; Rebekah Mercer, a key financier of Donald Trump’s 2016 campaign, runs the foundation and sits on the MI board.  Exxon also continues to give large donations the U.S. Chamber of Commerce and remains a member of the American Petroleum Institute, each of which has fought hard against environmental regulations and climate measures. The oil company only left the Koch-funded American Legislative Exchange Council in 2017, four years after it pushed model legislation in Oklahoma, Colorado, and Arizona that described global warming as a “theory.”

Itai Vardi reported at DeSmog this summer that Phil Goldberg, director of PPI’s Center for Civil Justice, has come out swinging against climate lawsuits being brought by cities and states against fossil fuel companies. The law firm at which Goldberg is a partner — Shook, Hardy & Bacon — defended the tobacco industry for decades and was the inspiration for the fictional firm Smoot, Hawking in the 2005 film “Thank You For Smoking.” As a slew of lawsuits has begun to call into question fossil fuel companies’ role in fueling and spreading misinformation about the climate crisis, the industry has stepped into high gear to fight off litigation.

Goldberg is a former lobbyist for the coal company Peabody Energy who was brought on as special counsel by the National Association of Manufacturers in January as part of its Manufacturers Accountability Project, founded in 2017 to take on “activist litigation” against big oil companies; Exxon Mobil is a NAM member, and the MAP project has been among the most active bodies fighting off climate-related legal action. Both Peabody and NAM have also donated generously to climate denial groups over the years. Both, for instance, were members of the now-defunct Global Climate Coalition, which through the 1990s sought to undermine U.N. climate negotiations and the Intergovernmental Panel on Climate Change. Goldberg has also been an adviser for ALEC’s Civil Justice Task Force. In addition to the model legislation on global warming, ALEC has vigorously opposed climate and clean energy legislation around the country.

Lewis said that Goldberg works with PPI in a volunteer capacity and is not employed by the Third Way Foundation, despite his lofty title. Evidently, he’s vocally defending fossil fuel companies out of the goodness of his heart.

In March, Goldberg co-authored a report for the industry front group Grow America’s Infrastructure Now on how to bring legal action against anti-pipeline organizers. “Allowing vigilante regulation to go unchecked undermines our democracy. We honor civil protests in this country, but we should not have to accept improper efforts to overturn the rule of law,” Goldberg said in a press release. “People who violate the law by improperly interfering with legitimate business activities, even to advance a political or public policy preference, can be held accountable for their actions through civil litigation.” While not disclosed on the group’s website, GAIN spokesperson Craig Stevens is a partner at the DCI Group, which specializes in astroturf campaigns that have fought everything from anti-smoking laws to climate legislation. From 2005 through 2016, Exxon Mobil was a DCI client. In another detail not mentioned on the GAIN site, the group’s strategic adviser is James “Spider” Marks, who as of 2017 was the advisory board chair of the security firm TigerSwan, which — as The Intercept has documented extensively — engaged in “military-style counterterrorism measures” against anti-pipeline protesters.

Asked whether Goldberg’s positions on climate litigation were also PPI’s, Lewis replied, “PPI, which has long advocated for cap and trade, a carbon tax, and other polices to combat climate change, believes such policies should be made in representative legislatures, not the courts.” In short, yes.

Throughout the 2020 campaign cycle, PPI strategic adviser and Clinton White House insider Paul Bledsoe has commented frequently about the dangers of candidates being too hard on fossil fuels. “[Joe] Biden and other moderate candidates must emphasize that the market is already phasing out coal over time, but that their climate policies still allow a role for natural gas as a low-carbon transition fuel for some time,” he told the Washington Examiner in August. “This distinction is crucial to success in swing states like Pennsylvania, Ohio, and Michigan.” In a New York Times piece about Biden’s critics on the left, Bledsoe said, “Indulging in ideological purity is great until you actually want to solve the problem.”

“Happily,” he wrote in a February Forbes op-ed attacking the Green New Deal, “there is no need to eliminate fossil fuels in the next decade or require only renewable energy or guarantee public sector jobs to meet our climate goals.” We might never find out what Exxon Mobil’s money got up to at PPI last year. If its experts keep sounding like Bledsoe and Goldberg, though, it’ll probably keep coming.