Benjamin Netanyahu hinted that his friend Jared Kushner’s Mideast plan would give him the green light to annex nearly a quarter of the occupied West Bank. 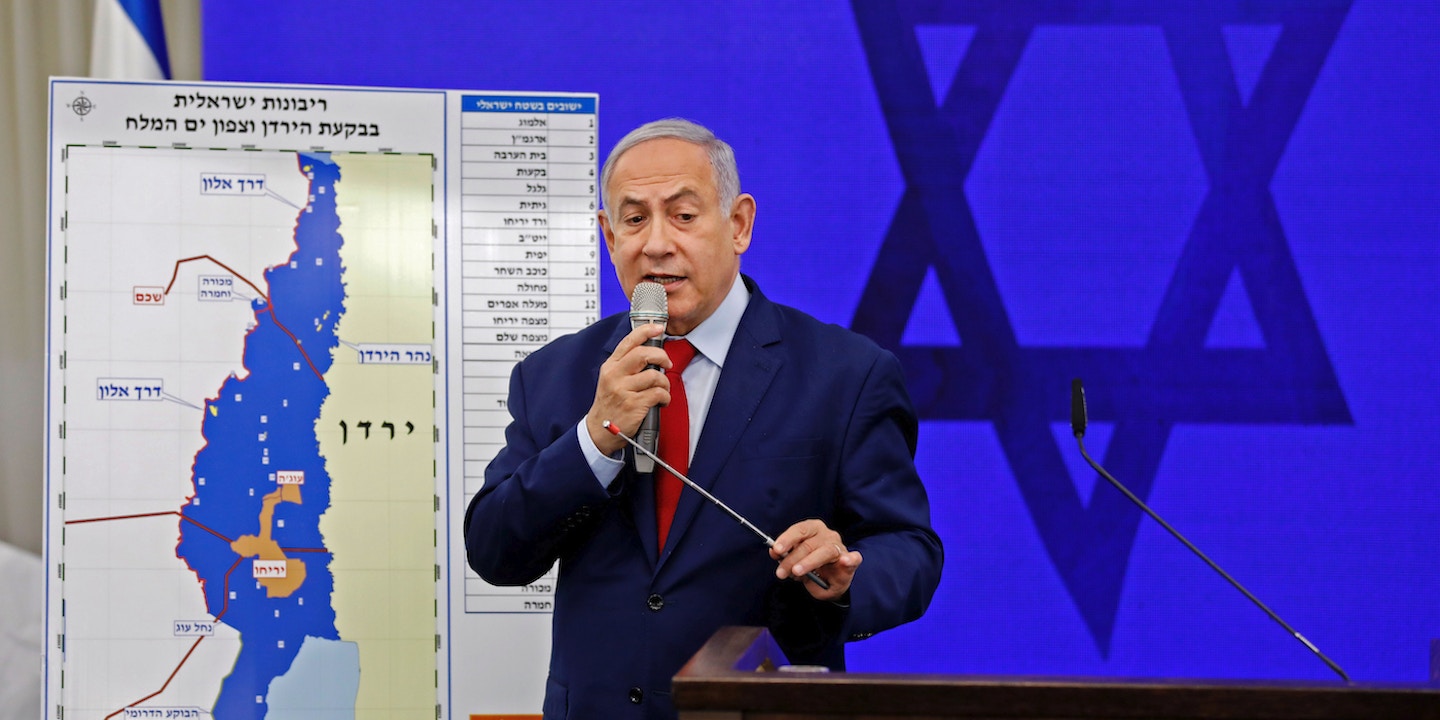 Israel’s prime minister, Benjamin Netanyahu, hinted on Tuesday that President Donald Trump’s Mideast peace plan, set to be unveiled after next week’s Israeli election, would give him the green light to annex the Jordan Valley, nearly a quarter of the occupied West Bank.

Palestinian and Israeli activists condemned a map of the proposed annexation presented by Netanyahu at a televised news conference, in which he argued that his close relationship with Trump would make it possible for him to extend Israel’s borders if he wins re-election.

“In recent months, I have led a diplomatic effort in this direction, and the conditions for this have ripened,” Netanyahu said in his pitch to voters.

While the Trump administration’s “Vision for Peace,” devised by Netanyahu’s longtime friend Jared Kushner, is not yet public, Israeli annexation of the Jordan Valley would make a viable Palestinian state impossible by fragmenting it into enclaves within Israel.

Ayman Odeh, who leads the Joint List, the third-largest bloc in Israel’s parliament, the Knesset, called Netanyahu’s proposed annexation a “vision of apartheid.”

“They aren’t annexing the West Bank into Israel; they are turning Israel into an extension of the West Bank,” Odeh added, according to a translation by the Israeli-American journalist Mairav Zonszein. “A reality where a minority of Jewish citizens control a majority of Palestinian subjects.”

Yousef Munayyer, director of the U.S. Campaign for Palestinian Rights, pointed out that Netanyahu’s map would allow the 20,000 residents of the Palestinian city of Jericho to live under nominal self-rule, but leave them as dependent on Israeli permission to enter or exit their enclave as the besieged residents of Gaza.

Netanyahu's map shows the intention to make Palestinian Jericho a new Gaza, another open air prison Israel can lock down as it pleases. https://t.co/tv2QfPQgBI

“Anyone familiar with the conflict, the geography of the region, and the minimum conditions for establishing a Palestinian state in the Occupied Territories knows that an independent and viable Palestinian state cannot be established with such a large swath of land along the Jordan River taken away,” the Israeli group Peace Now said in a statement deploring Netanyahu’s plan. “The autonomy and access roads Netanyahu guarantees to the Palestinians in the Valley are alarmingly similar to the Bantustan formula in former Apartheid South Africa.”

A detailed analysis of Netanyahu’s map by Peace Now concluded that he planned to first annex more than 22 percent of the West Bank, sealing its major population centers off from the neighboring Arab state of Jordan and leaving more than 44,000 Jordan Valley Palestinians in isolated communities, effectively living in Israel but without citizenship or voting rights. Israel’s Peace Now showed what the Israeli-occupied West Bank would look like after the annexation of the Jordan Valley and Northern Dead Sea Region by Israel.

Brian Reeves, a Peace Now spokesperson, observed that confining Palestinians to such enclaves could allow Israel to eventually annex the entire West Bank without giving its non-Jewish residents the right to vote. “If you are wondering how the Israeli right thinks it can annex the West Bank while not having to fully enfranchise millions of Palestinians, this is the formula,” Reeves wrote on Twitter.

The Israeli peace activists also reported that nearly 9,000 Palestinians reside in 48 shepherding communities in the Jordan Valley, which were ignored in Netanyahu’s plan.

Although the Israeli prime minister described his map as a “dramatic” new initiative, in reality it is almost identical to a plan to offer Palestinians limited autonomy in “four self-managing Arab counties” he first outlined in his 1995 book, “A Place Among the Nations.”

During his first term as prime minister, in 1997, Netanyahu presented a version of the same plan to then-U.S. President Bill Clinton, and, as the Washington Post reported at the time, “The Israeli army’s planning branch gave Clinton a detailed presentation on a classified army-drawn map of Israel’s security interests in the West Bank. Clinton, according to a U.S. official who has read a written account of the meeting, responded with a single word, ‘Interesting.'”

Commentators in Israel agreed that the latest version of Netanyahu’s proposal was unveiled this week in order to appeal to far-right voters, but the idea of annexing the Jordan Valley and offering some sort of autonomy to Palestinians in West Bank enclaves was first outlined by Yigal Allon, an Israeli cabinet member from the left-wing Labour party, in 1967, just weeks after Israel seized the territory from Jordan. The following year, the Israeli newspaper Haaretz reported that “cabinet ministers were giving serious thought to the so-called Allon plan,” which “calls for the incorporation into Israel of a 10- to 14-mile-wide strip along the West Bank of the Jordan River and the return to Jordan of the central mountainous region in which such towns as Nablus and Hebron are located. A corridor passing through Jericho would link the two regions.”

Netanyahu’s map is only a slightly revised version of the Allon plan map, with the key difference being that the Palestinians are no longer offered access to the international border with Jordan. 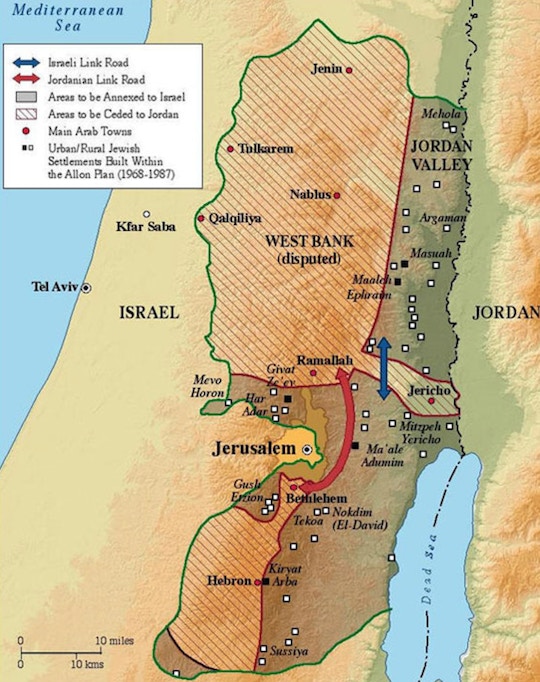 While Trump has yet to endorse Netanyahu’s proposal — which was condemned by governments around the world, including Saudi Arabia, Russia, and the United Kingdom — the Israeli prime minister seems to be hoping for a pre-election gesture of support.

Just before Israelis went to the polls in April, the American president gave Netanyahu a boost by recognizing Israel’s annexation of the Golan Heights. The following month, Kushner even brought Netanyahu a gift to commemorate that gesture, an updated U.S. map of Israel including the Golan Heights, with the word “Nice” scrawled on it with a presidential Sharpie. 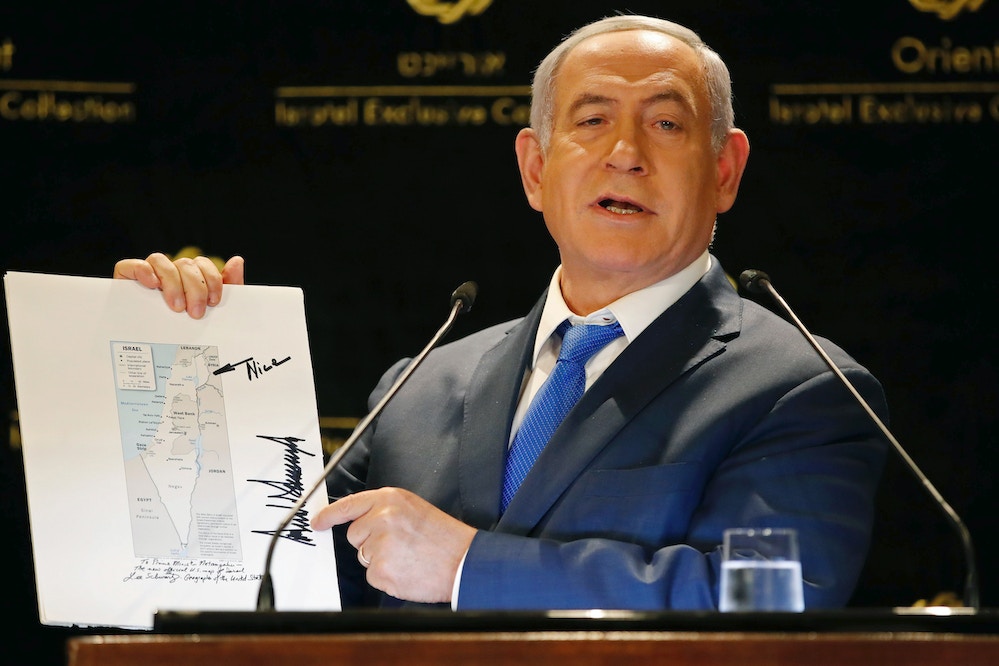 In May, Israeli Prime Minister Benjamin Netanyahu showed a map of Israel signed and annotated for him by U.S. President Donald Trump.

To that end, Netanyahu seems to have been working to draw the White House’s attention to the strategic importance of the Jordan Valley in recent months. In June, Netanyahu brought Trump’s ambassador, David Friedman, and his then-national security adviser, John Bolton, on a tour of the area.

Today I visited the Jordan Valley and Jordan River with PM @netanyahu, Israeli NSA Meir Ben-Shabbat, @USAmbIsrael, & @AmbDermer. I saw firsthand the strategic importance that these locations have on Israel's national security. (1 of 3) pic.twitter.com/JcNRnaqOxk

Netanyahu’s political rivals, the Blue and White party led by retired Gen. Benny Gantz, responded to his proposal by asserting that “the Jordan Valley will be part of Israel forever” and mocking his claim that only he could convince Trump to support Israeli sovereignty over the strategic but sparsely populated territory.