Illinois Rep. Dan Lipinski, one of the few remaining anti-abortion Democrats in Congress, barely survived a challenge by Newman in 2018. On September 17, Rep. Alexandria Ocasio-Cortez, D-N.Y., told the New York Times that she would endorse Marie Newman, the pro-choice woman challenging Illinois Rep. Dan Lipinski, one of the few remaining anti-abortion Democrats in Congress. The following day, when asked about her endorsement, House Majority Leader Steny Hoyer told reporters that there’s “absolutely” room in the Democratic Party for anti-choice lawmakers. “That doesn’t mean we’re not a pro-choice party — we are,” he said. “But that doesn’t mean that … either the Speaker or I believe that we ought to exclude people who have a different view.”

Not long after Hoyer’s comments, Rep. Ro Khanna, D-Calif., called out fellow progressives who have yet to endorse Newman, who came within 2.2 points of defeating Lipinski in the 2018 cycle. Ocasio-Cortez, Rep. Lauren Underwood, D-Ill., “and I are so far the Democrats endorsing pro choice @Marie4Congress over anti choice, anti ACA, anti LGBTQ equality Dan Lipinski,” Khanna tweeted. “Honest question: Shouldn’t endorsing @Marie4Congress be a no brainer for anyone who is a progressive in Congress?”

Many progressive House Democrats who want to stand up for reproductive rights have been privately helping Newman’s campaign, but are trying to keep it under wraps out of fear of retribution by party leadership. Other members have quietly expressed their desire to help. Much of the hesitation stems from the Democratic Congressional Campaign Committee’s longtime position of protecting incumbents, which DCCC Chair Cheri Bustos intensified through a contentious blacklist policy back in April.

But the eight-term incumbent is hardly a Democrat by today’s standards. Lipinski, who inherited the seat from his father, Bill Lipinski, in 2005, opposes abortion rights, LGBTQ equality, voted against the Affordable Care Act in 2010, and refused to endorse Barack Obama for reelection in 2012. According to one analysis, he votes with President Donald Trump about 40 percent of the time.

He also barely survived the previous primary challenge from Newman. Newman, in her first run, even had the backing of two of Lipinski’s home-state colleagues, Reps. Jan Schakowsky and Luis Gutiérrez. This time around, she’s also garnered support from leading progressives including presidential candidates Sens. Bernie Sanders and Elizabeth Warren. And despite the fact that several consultants dropped her campaign under pressure from the House Democrats’ campaign arm, she’s had no problem winning institutional support once again from groups like EMILY’s List, MoveOn, NARAL Pro-Choice America, Planned Parenthood, and the Progressive Change Campaign Committee. 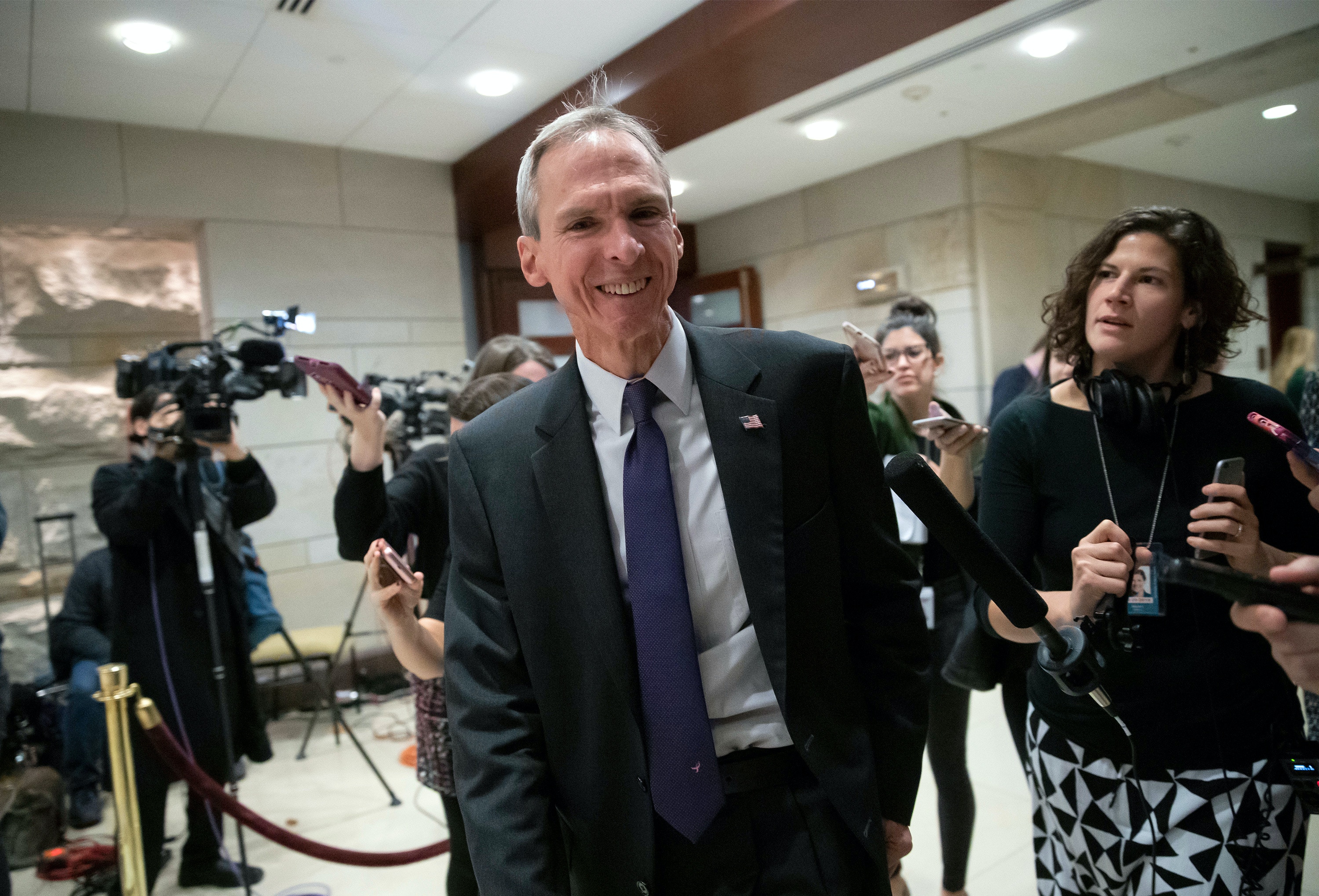 Rep. Dan Lipinski is met by reporters as he leaves the Democratic Caucus leadership elections at the Capitol on Nov. 28, 2018.

Underwood is one of the lawmakers boosting Newman’s campaign behind the scenes. Despite Khanna’s tweet, Underwood hasn’t actually endorsed Newman and told The Intercept that she doesn’t plan on making an endorsement at this time. But her support hasn’t exactly been a secret, either. She appeared at a campaign event with Planned Parenthood and Newman on September 18 and has donated to the candidate through her political action committee.

The Newman campaign will also likely tap into the network of volunteers she expanded through joining the campaigns of Underwood and Illinois Rep. Sean Casten, two Democrats who entered office as part of the blue wave in the 2018 midterm elections. They both defeated incumbent Republicans in red-leaning suburban districts. This cycle, there are already at least half a dozen Republican candidates lined up for the chance to unseat Underwood in the GOP-leaning district.

Schakowsky, who bucked her colleagues last cycle when she threw support behind Newman, is waiting for the Service Employees International Union to make an endorsement in the race before she makes her own, according to two sources familiar with the matter. Illinois Rep. Chuy Garcia, who replaced the retiring Gutiérrez, has signaled to the campaign that he wants to help, but not until later in the race. When asked whether he plans to endorsed, Garcia told The Hill that he sits on the Transportation and Infrastructure Committee and at least three subcommittees with Lipinski, “so I really haven’t given that much thought.”

Rep. Robin Kelly, another Illinois Democrat, has reached out to the campaign with connections and advice, but remains hesitant because of the DCCC’s leadership position on the race. “I know Marie and like Marie, but there’s also something to the fact that [Lipinski is] a current member and that mutual respect,” Kelly told The Hill. “I don’t agree with all of his stances, but you know how you respect the office, like we say about the president?”

Reps. Lois Frankel of Florida and Andy Kim of New Jersey are, according to sources familiar with the matter, also privately supportive of Newman’s bid for office. Rep. David Cicilline of Rhode Island told The Intercept that he is not supporting Newman. “He’s focused on growing the Democratic majority around the country,” his office said. And the co-chairs of the Congressional Progressive Caucus, Reps. Pramila Jayapal, D-Wash., and Mark Pocan, D-Wisc., have so far remained silent on the Newman campaign.

Ocasio-Cortez told The Intercept that she’s heard about consequences for supporting primary challengers, so she can see why people would support Newman privately rather than publicly.

“I also think that the dynamic is changing a little bit this cycle,” she said. Ocasio-Cortez herself, of course, upset longstanding Rep. Joe Crowley. “I’m trying to contribute to that culture, obviously.”

“When I first got here,” she continued, “quite a few members told me it’s an open secret that the more conservative members of the party quietly support primary challengers to certain progressives as well … so the way I kinda think about it is might as well be honest about it.”

As for Hoyer’s comments about the Democratic Party’s inclusion of anti-choice lawmakers, Ocasio-Cortez disagreed while recognizing that “we’re a caucus of many different people.”

“He’s free to believe that obviously, I’m not here to say that he’s wrong,” she continued. “I’m saying we have different takes, and I think that an anti-choice position is a relic of our past and it is firmly in the Republican ideology, and I do not think that is what our party should be standing for.”