No other candidate in the U.S. presidential race comes close to Sanders in terms of his willingness to condition aid to Israel. 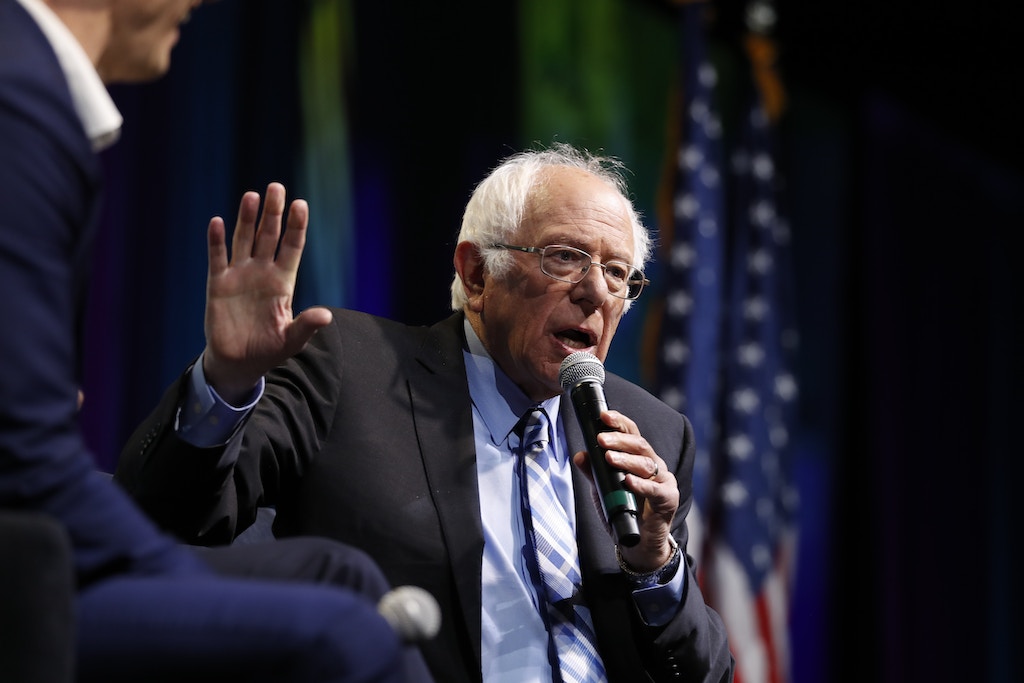 On Monday, the only Jewish candidate in the Democratic presidential race stood in front of an audience of Jews in Washington, D.C., and suggested cutting U.S. aid to Israel.

And they applauded him.

“I would use the leverage, $3.8 billion is a lot of money, and we cannot give it carte blanche to the Israeli government or for that matter to any government at all,” Sen. Bernie Sanders said at the annual convention of J Street, a liberal pro-Israel advocacy group.

It isn’t the first time Sanders has discussed deploying foreign aid as “leverage” over the Jewish state. Back in the fall of 2017, in an interview with me for The Intercept, the Vermont senator described the United States as “complicit” in the illegal occupation of the West Bank and Gaza and said he would consider voting to reduce U.S. aid to Israel.

At J Street, however, he went much further. “What is going on in Gaza right now is absolutely inhumane, it is unacceptable, it is unsustainable,” the Democratic presidential candidate told his interviewers, Pod Save the World hosts — and former Obama aides — Tommy Vietor and Ben Rhodes. “My solution is to say to Israel: You get $3.8 billion every year. If you want military aid, you’re going to have to fundamentally change your relationship to the people of Gaza.”

Then came the kicker: “In fact, I think it is fair to say that some of that should go right now into humanitarian aid in Gaza.”

"My solution is to say to Israel: you get $3.8 bil every year, if you want military aid you're going to have to fundamentally change your relationship to the people of Gaza, in fact I think it is fair to say that some of that should go right now into humanitarian aid" #JSt2019 pic.twitter.com/z5WmEEjbxI

“I can’t think of any presidential contender from either party who’s said anything comparable,” said Khaled Elgindy, a senior fellow in the Center for Middle East Policy at Brookings Institution and the author of the recently published book “Blind Spot: America and the Palestinians, From Balfour to Trump.” Diverting money away from the Israeli military and toward hungry Gazans may not sound radical as a policy, Elgindy told me, but “from a political standpoint it’s an earthquake.”

Perhaps unsurprisingly, then, the usual suspects on the right have lined up to bash Sanders — and, in the process, have revealed their own anti-Palestinian racism.

Conservative commentator Ben Shapiro, who once claimed “Israelis like to build” while “Arabs like to bomb crap and live in open sewage,” accused Sanders of linking “American aid to Israel” to “concessions to the terrorist group Hamas.”

In which Bernie Sanders conditions American aid to Israel on concessions to the terrorist group Hamas.

Former U.N. ambassador Nikki Haley, who once blocked a respected Palestinian official from being appointed as a U.N. envoy, accused Sanders of wanting “to take money we give to Israel to defend itself from terrorists, and give it to Gaza, which is run by terrorists.”

Just when you thought Bernie Sanders couldn’t get any more radical, he outdid himself. He wants to take money we give to Israel to defend itself from terrorists, and give it to Gaza, which is run by terrorists?? Unreal. Why isn’t every other Dem pres candidate saying he’s wrong?

Knesset speaker and Likud politician Yuri Edelstein, who has led the effort to prevent Israel from being defined as a “state for all its citizens,” accused Sanders of “talking nonsense” and suggested foreign aid was used by Hamas to “attack the state of Israel.”

. @BernieSanders, stop talking nonsense.
Just yesterday, I met with representatives of the EU during their visit to the Knesset, and I told them about the absurd claims regarding the economic situation in the Gaza Strip. pic.twitter.com/Ng5pGA7f5F

Notice the common thread to their claims? Gaza = Hamas. The people of Gaza = terrorists.

This is racism, plain and simple. The Gaza Strip, home to nearly two million men, women, and children, is one of the most densely populated areas on Earth. Blockaded by Israel, with Egyptian assistance, since 2007, and bombarded by the Israeli air force in 2008, 2012, and 2014, Gaza is often described as an open-air prison. The majority of Gazans live in poverty; almost half of them are unemployed, and one in five pregnant women in the Strip are malnourished.

I asked the independent senator to respond to these attacks on him, and on the people of Gaza, from the right. “Gaza is experiencing a humanitarian and environmental crisis,” Sanders told me. “Conflating an effort to address that crisis with ‘support for Hamas’ is part of an effort to dehumanize Palestinians and continue the conflict.”

“As I have said many times,” he continued, “we need an even-handed policy in the Middle East which guarantees Israel’s right to exist in peace and security, and which treats the Palestinian people with respect and dignity.”

“Conflating an effort to address [the humanitarian] crisis with ‘support for Hamas’ is part of an effort to dehumanize Palestinians and continue the conflict,” Sanders told me.

During the 2014 Gaza conflict, Sanders called Israel’s use of force against civilian targets “terribly, terribly wrong” but was booed at a town hall after he “both-sided” the violence and accused Hamas of using aid money to build tunnels “for military purposes” and firing rockets into Israel “from populated areas.”

In recent years, though, the senator has been on a journey, “violating taboo after taboo when it comes to the American debate about Israel,” to quote the Forward’s Peter Beinart. With the encouragement of his foreign policy adviser Matt Duss, a former president of the Foundation for Middle East Peace and long-standing critic of Israel’s settlement project, he has reached out to Palestinian anti-occupation activists such as Issa Amro and Israeli human rights groups such as Gisha.

In May 2018, as Israeli snipers gunned down Palestinian protesters in Gaza during the Great March of Return, Sanders told me that “instead of applauding Israel for its actions, Israel should be condemned” for “shooting unarmed protesters.” Two days later, he led 12 of his fellow senators in calling on Secretary of State Mike Pompeo to “do more to alleviate the ongoing humanitarian crisis in the Gaza Strip.”

In June 2018, he posted a video on his Twitter feed of ordinary Gazans describing what it is like to live under a blockade, adding: “The voices of Palestinians are rarely heard.”

In April 2019, he slammed Israeli Prime Minister Benjamin Netanyahu for “appealing to racism within Israel,” in an interview with NBC News. “I hope he loses his election,” Sanders said.

Don’t get me wrong: The senator’s record on Palestine is far from perfect. He has yet to back or endorse the bill introduced by Rep. Betty McCollum, D-Minn., to “prohibit funding for the military detention of children in any country, including Israel.” He opposes the boycott, divestment, and sanctions, or BDS movement, a nonviolent campaign by Palestinian civil society organizations to try and end the occupation by borrowing tactics from the South African anti-apartheid struggle. He continues to cling to the fantasy of a two-state solution, which has been dead and buried for years.

Nevertheless, no candidate in the U.S. presidential race comes close to Sanders in terms of his willingness to condition aid to Israel and to defend the humanity and dignity of the occupied Palestinian people.

For example, both Sen. Elizabeth Warren and South Bend, Indiana, Mayor Pete Buttigieg deserve praise for telling the J Street crowd on Monday that they would not allow U.S. aid to Israel to be used to illegally annex the occupied West Bank. The problem with that position, however, is not only that the annexation of the West Bank is already happening, but that trying to prevent it does nothing to help the Palestinians of Gaza.

Meanwhile, as the Wall Street Journal reported, the other Democratic presidential candidates who spoke at J Street, such as former Department of Housing and Urban Development Secretary Julián Castro and Sen. Amy Klobuchar, refused to go even as far as Warren or Buttigieg on the issue of aid to Israel, let alone as far as Sanders. In an interview with the Journal’s Sabrina Siddiqui on Thursday, Joe Biden — who once declared, in reference to Netanyahu, “I love him, I love him” — described Sanders’s suggestion of cutting military aid to Israel as “absolutely outrageous.”

None of these other candidates reflect the view of the Democratic base, which overwhelmingly favors “reducing aid to Israel based on human rights violations.” None of them have a practical plan for ending the occupation or putting genuine pressure on the Israelis to stop building settlements or end their blockade of the Strip. They are, therefore, to borrow a line from Sanders, complicit in the ongoing suffering of two million Gazans.

When I went to interview Sanders at his office on Capitol Hill in 2017, I was greeted at the door by Yousef Bashir, a young Palestinian activist and author from Gaza. Sanders had offered him an internship after being introduced to him along with a group of Israeli students. “I told Bernie he was the most popular Jew in Gaza since Moses,” Bashir recalled in an interview with the New Yorker in 2018.

It’s more than a nice line. After 12 years of siege, isolation, and bombardment, many of the Palestinians of Gaza are demoralized, disillusioned, filled with despair.

A Bernie Sanders presidency might offer them something no other Democratic candidate can: hope.

This article previously stated that Bernie Sanders condemned Israelis shooting unarmed protesters in May 2017; he made those remarks in May 2018.