Why Did Chuck Schumer Call an Islamophobe His “Principled” Friend?

Rep. Peter King is not a “moderate” Republican. 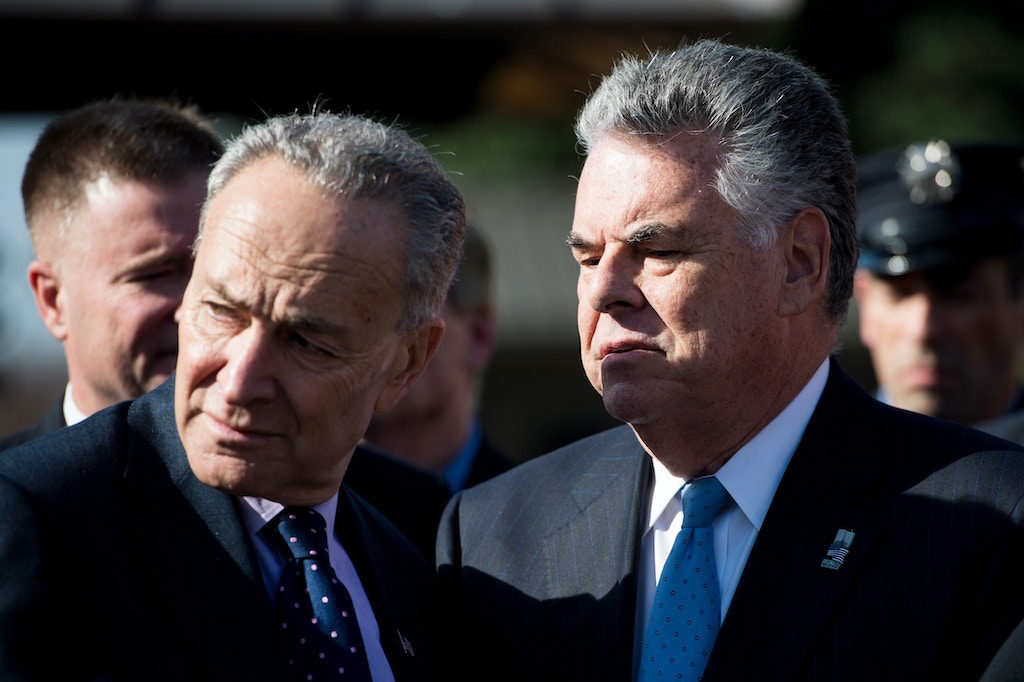 Sen. Chuck Schumer, left, and Rep. Peter King talk during a press conference calling on passage of the James Zadroga 9/11 Health and Compensation Reauthorization Act outside the Capitol on Nov. 17, 2015.

Hurrah! One of the leading bigots on Capitol Hill is retiring. Right-wing Republican Peter King announced Monday that he will not be standing for reelection to the House of Representatives in 2020.

Yet media organizations, from the New York Times to the Washington Post to Vice News, lined up to describe the New York congressman as a “moderate” and insisted on framing his departure as a blow to Donald Trump and the Republican Party (King is the 20th Republican in the House to announce he’s standing down).

Even worse, the top Democrat in the Senate, Chuck Schumer, described King as standing “head & shoulders above everyone else” and “principled.” “I will miss him in Congress & value his friendship,” the Senate Minority Leader tweeted.

Peter King stood head & shoulders above everyone else

He’s fiercely loved America, Long Island, and his Irish heritage and left a lasting mark on all 3

I will miss him in Congress & value his friendship https://t.co/GSXizZ2c5D

To which Kingian principles was Schumer referring? His call for George W. Bush to “get a medal” for torturing terror suspects? His repeated demands for journalists in the United States to be prosecuted? His refusal to “morally blame” his friends in the IRA for the killing of civilians? His insistence that Eric Garner was to blame for his own death, and not the NYPD officer who put him in a chokehold?

Or maybe it was his deep-seated and long-standing Islamophobia. In a rare media dissent on Monday, the Daily Beast’s Spencer Ackerman pointed out how “no legislator did more to demonize American Muslims” than the 14-term Republican representative from Long Island. “Long before there was Donald Trump, there was Peter King,” he wrote.

In 2011, as chair of the House Committee on Homeland Security, King announced hearings titled “The Extent of Radicalization in the American Muslim Community and that Community’s Response.” The congressman claimed that increasing numbers of Muslim Americans were being radicalized — despite a Pew Research Center poll that same year showing “no evidence of rising support for Islamic extremism among Muslim Americans.” He also claimed that Muslim Americans weren’t cooperating with law enforcement or reporting terror threats to the police — despite an academic study the previous year “showing that 40% of all extremist plots in America were thwarted as a result of Muslim American help.”

The hearings, said Rep. Sheila Jackson Lee, D-Texas, were “a way to demonize and castigate a whole broad base of human beings.” Writing in the Washington Post at the time, columnist Dana Milbank described how “Rep. Keith Ellison (D-Minn.), a Muslim, sobbed as he testified about a Muslim American who died as a first responder on Sept. 11, 2001,” but “King looked away.”

The New York Republican, noted Millbank, “staged his investigation into the loyalty of Muslim Americans in an appropriate place: a hearing room once used by the House Un-American Activities Committee.” The fact that the hearings included “false allegations of subversion,” he added, amounted to “the very definition of McCarthyism.”

King hasn’t become any less McCarthy-esque, or bigoted, in the intervening years. In May 2016, he endorsed Trump for president and, by December 2016, King had arrived at Trump Tower to try and persuade the then president-elect to introduce a federal Muslim surveillance program. In January 2017, as protesters amassed at the nation’s airports, he threw his weight behind Trump’s Muslim ban. And, according to the Times on Monday, the retiring congressman told the president “he would use his final months in office to vote against articles of impeachment and support Mr. Trump’s re-election bid.”

So what on Earth is with Schumer and his suggestion that his fellow New Yorker is some sort of “principled” Republican who stands “head & shoulders above” the rest of his Trumpist party?

What Schumer exemplifies is the Democratic establishment’s unwillingness to take Islamophobia seriously — or to stand up for the rights of Muslim Americans in the same way that they stand up for other minority communities.

On the one hand, it could be argued that the Senate minority leader is only doing what top Democrats always do: fetishize the idea of bipartisanship and brag about their friendships across the aisle. Remember how Joe Biden heaped praise on a Michigan Republican running for reelection to the House in 2018, or told Mitch McConnell in 2013 that “we want to see you come back” to the Senate? Or how the 2020 Democratic presidential candidates fell over one another to laud John McCain at the last debate in Ohio, despite the late Republican senator from Arizona having run a toxic and racist election campaign against Barack Obama in 2008?

On the other hand, what Schumer exemplifies is the Democratic establishment’s unwillingness to take Islamophobia seriously — or to stand up for the rights of Muslim Americans in the same way that they stand up for other minority communities. The sad fact is that anti-Muslim bigotry gets a pass in Washington, D.C. — from both politicians and the press alike. There is no cost or consequence for Islamophobic rhetoric or behavior. Ask Rep. Mo Brooks, R-Ala. Or ask the current occupant of the White House.

Schumer’s shameful tweet is a reminder that the Democrats need new leadership. They need senators and members of the House who are willing to call out Islamophobia and racism across the board, and who won’t sacrifice the safety or security of minority communities at the altar of “bipartisanship.”

On Monday, it was left to Rep. Ilhan Omar, D-Minn., to provide the moral leadership and clarity that Schumer couldn’t.

Peter King is an Islamophobe who held McCarthyite hearings targeting American Muslims, said “there are too many mosques in this country” and blamed Eric Garner for his own death at the hands of police.