When Peter Handke visited Bosnia in 1998, he stayed at a horrifying landmark: a hotel used by Serbs during the war as a rape camp. 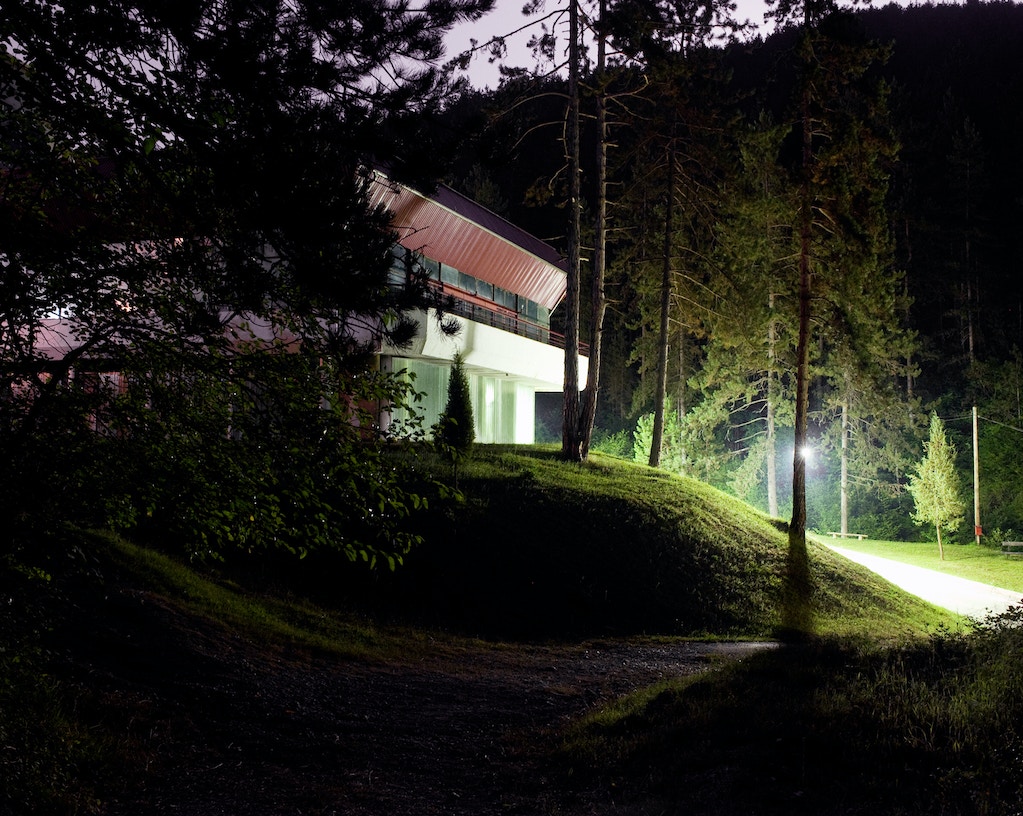 The Vilina Vlas hotel in Visegrad, where Bosniak prisoners were beaten, tortured, and sexually assaulted during the Bosnian war.

What does it mean to spend a night at the Vilina Vlas hotel?

The answer to this seemingly odd question reveals the moral and intellectual collapse of the Swedish Academy, which last month bestowed on Peter Handke the 2019 Nobel Prize for Literature. Handke is an Austrian-born writer who in his early years produced some remarkable works of fiction and memoir, but since the mid-1990s has promulgated, in a series of thin books, a fringe position on the Bosnia war that amounts to genocide denial.

This story is set on the outskirts of Visegrad, in a forest where the Vilina Vlas is located. The hotel has a spa, and ordinarily it would be a tranquil place to stay except for one fact. In 1992, which feels like yesterday to anyone familiar with this story, the Vilina Vlas was turned into a rape camp by Serbs who were cleansing Visegrad of its Muslims and brought girls and women there to violate.

The Vilina Vlas is an agonizing landmark. Its horrors were detailed in newspaper articles during the 1990s conflict, followed by war crimes trials in which survivors described the rapes in ghastly testimonies. Rape was a consistent feature of what the Serbs did across Bosnia, and that led to a series of pioneering verdicts on sexual violence from the International Criminal Tribunal for the former Yugoslavia.

Although Visegrad’s majority population was Muslim before the war, the Serb project of ethnic cleansing was successful: Muslims were murdered, tortured, raped, and removed from the land where for centuries they had lived. But cleansing does not consist just of getting rid of people — that is only the beginning of the process. It is incomplete at this stage. Another step is the obliteration of meaningful objects: The town’s mosques were dynamited and the rubble carted away. There must be no visual reminders of the people who are gone.

There is another step too: the obliteration of memory. After the war, the Serbs who controlled Visegrad reopened the Vilina Vlas as the spa hotel it used to be. Foreign visitors were encouraged to stay, and some did. I do not know how many of those visitors knew what had happened during the war or had heard of it but disbelieved. Many Serbs and their supporters continue to deny the mass atrocities committed during the war. But the visitors came, and, in 1998, one of them was Peter Handke.

It has not been previously reported that Handke stayed at the Vilina Vlas. I came across an elliptical reference to his visit in an obscure monograph written by his American translator, Scott Abbott. Handke often traveled with a small entourage of translators and friends, including Abbott. Near the end of May 1998, according to Abbott’s book, Handke and his companions stayed at “a large resort hotel tucked back into the forested hills above the town.” Abbott did not give the hotel’s name but described it as “a cavernous home to men convalescing from the war.”

I have been to Visegrad twice, once during the war and once after. On my second visit, I went to the Vilina Vlas because during the conflict, I had written about a girl who was raped there. Her younger sister was also raped there and was never seen again (she was presumably killed after the Serbs were done with her). I wanted to see the place. And there it was, set amid a forest, a large hotel that was being used for not just the occasional foreign visitor but also, as Abbott noted in his book, for Serbs convalescing from the war.

Visegrad has few hotels and none of the others match the description provided by Abbott. When I contacted Abbott, he said he could not remember the name. I found a person who happened to be staying at the Vilina Vlas at the same time as Abbott and Handke, and though this person could not remember the hotel’s name, I sent pictures of three hotels and this person identified the Vilina Vlas as closely resembling the one where they stayed. (Handke did not reply to emails sent to his representatives.)

At the time of his visit in 1998, Handke was a famous writer beloved by Serbs. In 1996, he published two books endorsing the discredited Serb ultranationalist view that atrocities committed by their fighters had been exaggerated by the media. In “Summer Addendum to a Winter’s Journey,” Handke expressed skepticism and scorn for news reports about Serbs going on a rampage against Visegrad’s Muslims. Handke had visited Visegrad in 1996, and when he returned with his travel companions in 1998, he was a hero to the Serbs there. Abbott’s book even recounts how the mayor, Aleksandar Savic, was their ever-present host. (Savic was among the wartime Serb leadership in the town, and though he was not charged with war crimes, he was banned from holding public office in 2004 after international monitors determined that he was obstructing the effort to find war criminals.)

We are getting closer to understanding what it means to stay at the Vilina Vlas hotel.

It is hard to imagine that Handke was not aware, when he stayed at the Vilina Vlas, of what was widely reported to have happened there. He had visited Visegrad before and written in detail about the town’s cleansing (which he doubted). A passage in “Summer Addendum” even mocks an investigative article written about Visegrad by New York Times reporter Chris Hedges. Handke must have read that story closely because he made fun of Hedges for referring to the town’s warlord as walking around barefoot. In his close reading of that article, Handke would have come across the lines Hedges also wrote about a witness account of warlord Milan Lukic: “He said Mr. Lukic and his followers raped young girls held captive at the Vilina Vlas spa outside Visegrad. And he said Jasna Ahmedspahic, a young woman, jumped to her death from a window of the spa after being raped for four days.”

It would seem unlikely that Handke, after reading and writing about the Hedges story, would have forgotten its chilling reference to the Vilina Vlas. If, however, that was the case, it is very unlikely that all of his companions were in the dark about it. According to Abbott’s book, the entourage included Thomas Deichmann, a German journalist who is regarded as one of the principal deniers of the genocide in Bosnia. A year before the trip, Deichmann wrote a discredited article that tried to argue that the first images of Serb concentration camps had been staged. Even though Deichmann’s views on what happened in Bosnia are appalling, he must be well aware of the reporting on the war, and it is hard to imagine that he did not know what was written about the Vilina Vlas. (Deichmann did not respond to a request for comment).

The answer to the question of staying at the Vilina Vlas is now before us.

What’s come to be known as ethnic cleansing is not a simple or quick act. To succeed, it must be ongoing and everlasting. The memory of what happened must be denied and repressed at all times, so that it does not return to destabilize the false history you are trying to establish. If you stay at the Vilina Vlas without knowing what happened there, then you are an unwitting participant in the process of memory erasure, to life returning to normal in places that are not normal and never should be. If you stay there with the knowledge of what happened, then you are an active accomplice to the moral crime of genocide denial.

I find it impossible to end this story without mentioning something that’s probably obvious by now: the fury I feel that more than 25 years after the war, we again have to debate and prove these already proven crimes. The terrible questions of atrocity and guilt in Bosnia were settled long ago in trials and other investigations; there is a mass of evidence. But thanks to the Swedish Academy, these long-settled questions have been reopened because the work of a genocide denialist has been authenticated with a Nobel Prize. The witnesses and survivors of murder and torture are recipients of yet another blow from the so-called civilized world that, for so many years, hardly lifted a hand to help them during the war. We must plead our case again.

There is no end to the agony that this so-called civilized world is willing to let those who are not in its charmed circle suffer. They do not care, and there is no sign they will ever care. Having made this horrendous mistake, the Swedish Academy shows no inclination to return to the grave the lies that they have unbelievably brought back to life. They could still revoke the Nobel Prize that was awarded to Handke — the official ceremony is on December 10 — but it seems unlikely that they will do so, because they do not recognize the truth and pain of others.