Donors to the fundraiser gave a minimum of $15,000 to attend. Nunes became uncomfortable when The Intercept asked about his alleged calls to Parnas. 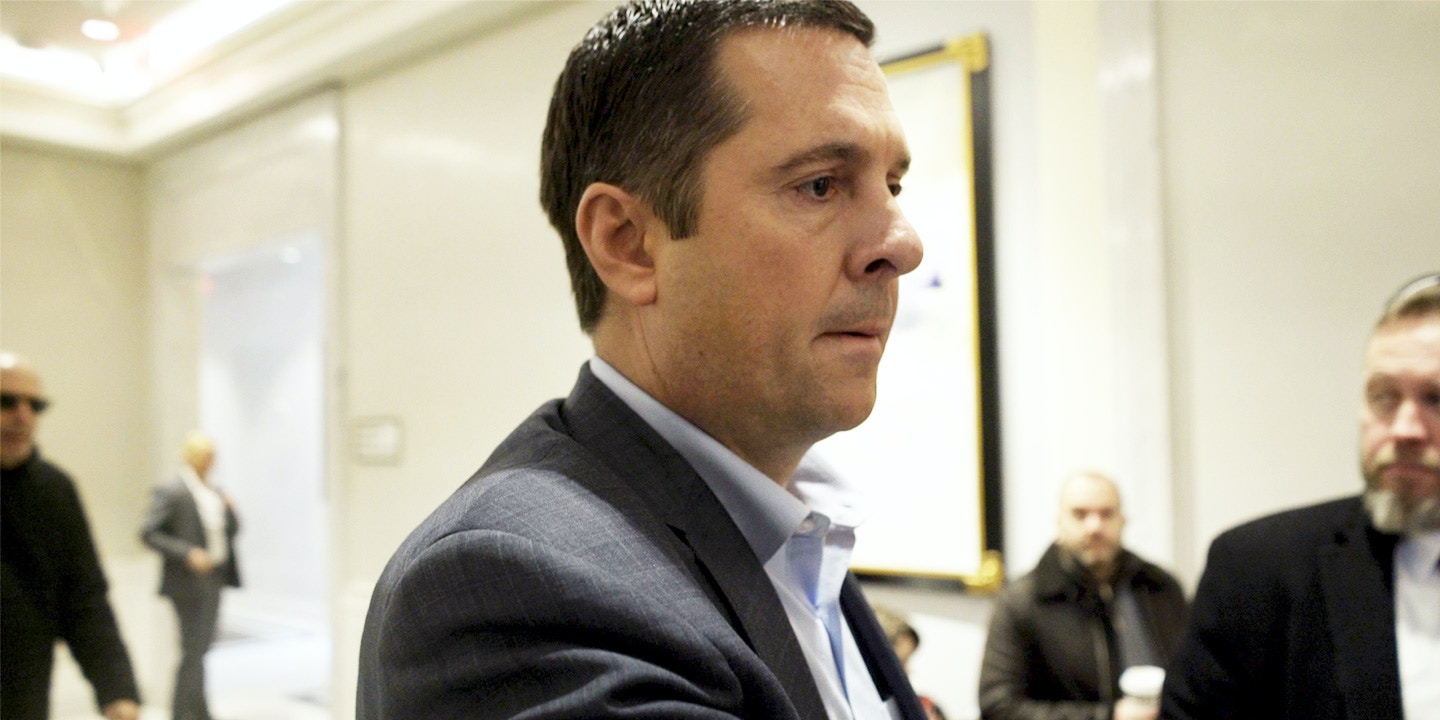 The Lotte New York Palace hotel swelled this weekend with tourists taking selfies in the courtyard next to its 35-foot Christmas tree. In the lobby, parents scrambled to make space for Instagram moments of their children sitting on Santa’s lap.

But on Saturday, in the upper levels of the luxury hotel, just blocks away from Rockefeller Center in Manhattan, House Republicans gathered for a more somber purpose: to gauge the party’s prospects in 2020, and to collect checks from donors giving a minimum of $15,000 to attend. The event featured dozens of lawmakers, wealthy donors, and GOP campaign staff. In previous years, National Republican Congressional Committee galas like the one at the Palace Hotel have attracted leading figures from the finance industry, a relationship that has come under increasing scrutiny.

Following the 2018 Democratic wave in Congress, House Republicans continue to contend with the grim prospects of next year’s election cycle. The NRCC, which sponsored the event, will be forced to find candidates for the now 20 members who are forgoing reelection, an unusually high retirement rate. Earlier this month, North Carolina announced new court-ordered congressional districts, a change that analysts predict will cost the party two seats.

Both parties are betting on harnessing partisan enthusiasm over the presidential campaign to boost turnout. Many Republicans hope backlash from the impeachment inquiry will benefit GOP candidates.

But one lawmaker, recently revealed to be at the center of the scandal, appeared rattled over the controversy.

Rep. Devin Nunes, R-Calif., spotted by The Intercept at the event, declined to answer questions about recent revelations that put him at the center of the impeachment scandal — of which he has been a leading critic. We attempted to ask the congressman about his reported contacts with Lev Parnas, an associate of Rudy Giuliani indicted over allegedly funneling foreign money, using a front company, to a super PAC tied to President Donald Trump’s reelection campaign.

After The Intercept approached Nunes about his contacts with Parnas and whether he was involved with the effort to pressure the Ukrainian government, the California lawmaker sped off, walking through the Palace Hotel to the hotel’s lounge. Moments later, he returned with a smartphone, pointed at this reporter. He remained quiet while asked again about his calls. Nunes then conferred with a U.S. Capitol Police officer stationed at the event, who had The Intercept removed from the hotel. An individual Nunes spoke to in the hotel, wearing an earpiece, followed The Intercept around the block after the exchange.

Last week, the House Intelligence Committee released telephone records, obtained through a subpoena of AT&T, revealing that Parnas appeared to be in frequent contact with Nunes at the time when Parnas was believed to be involved in an effort to pressure the Ukrainian government to investigate Hunter Biden in a bid to harm Joe Biden’s political prospects. The calls by Nunes to Parnas, as well as to Giuliani, were made in April, at a time when Giuliani had publicly called for an investigation into the former vice president’s son over his appointment to a Ukrainian gas company called Burisma Holdings.

Nunes, the ranking member of the Intelligence Committee, never disclosed his own communications to Parnas or Giuliani during the impeachment hearings over the last two months, despite accusing chair Rep. Adam Schiff, D-Calif., of withholding relevant information from the committee. Nunes disparaged the impeachment inquiry from the beginning, calling it a “an impeachment process in search of a crime.”

Nunes has struggled to explain his rationale for concealing his communications with the men involved in the alleged pressure campaign in Ukraine at the height of their effort, which reportedly included a bid to withhold military assistance and the firing of an ambassador viewed as an obstacle to the strategy. During a Fox News interview on Thursday, Nunes was asked repeatedly about his calls to Parnas, questions he dodged. “So you never had any phone conversation with him?” the host asked. “We have not been able to confirm that yet,” Nunes responded. “I don’t really recall that name,” the congressman eventually blurted about his contacts with Parnas.

Outside the event, The Intercept asked several other GOP lawmakers about the recent coverage of hedge fund billionaire Paul Singer, who has donated $248,500 to the NRCC this year. Last week, Fox News host Tucker Carlson highlighted Singer’s role in investing in businesses allegedly in order to downsize them, and called Singer a “vulture capitalist” who had purchased Republican silence over job losses through hefty donations.

Singer, notably, had been a staunch supporter of Sen. Marco Rubio’s, R-Fla., bid for the presidential nomination in 2016, and was the original financier behind research effort that created the controversial “Steele Memo” alleging Russian influence over Trump. The research was later underwritten by the Democratic National Committee and the Hillary Clinton campaign after Trump secured the Republican nomination.

Rep. Tom Reed, R-N.Y., shrugged off the criticism of the hedge fund billionaire. “I’ll leave that to Paul Singer to address, who he donates to and what he supports,” said Reed, who has accepted $5,600 in donations from Singer this year. Reed praised Singer’s role in supporting LGBT rights.

Asked about whether donors who can contribute a quarter-million dollars at a time might have undue influence, Rep. Greg Steube, R-Fla., denied knowing that the event he left had been a high-dollar fundraiser. “I don’t know anything about that,” said Steube. “Call my office if you’d like an interview.”

Update: December 9, 2019
After publication, Rep. Devin Nunes tweeted out a photo he took of an Intercept reporter who had identified himself and posed a question to the congressman. Nunes falsely described the reporter’s actions as stalking: “This guy stalked me in hotel lobby after my appearance on @foxandfriends Saturday AM maybe he was in Vienna with @cnn #goodnightVienna,” Nunes wrote.