Jim Costa, one of six Democrats to attend Trump’s Christmas party, has a history of support from real estate, oil and gas interests, and Koch Industries. 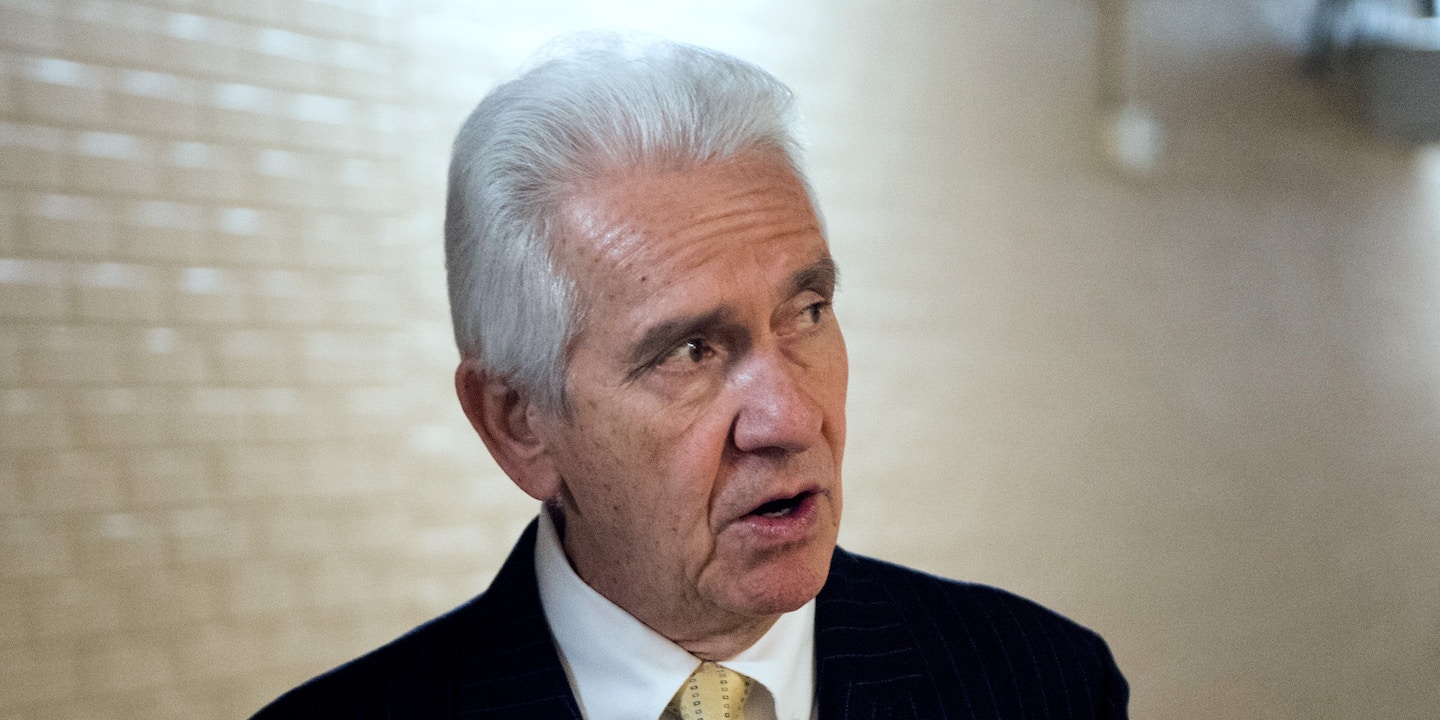 In 2004, California Rep. Jim Costa won his seat in the 20th Congressional District following a contentious primary battle against Lisa Quigley. Though the experienced Quigley had the backing of EMILY’s List and the endorsement of the retiring representative, Calvin Dooley, who was also her boss, the party establishment had largely rallied behind Costa.

“She’s a politician,” Costa, a former state senator, told the Los Angeles Times. “Now she’s trying to become an elected politician.” Costa had worked in the state legislature for over 20 years. He wrote and introduced the legislative version of what would later become the state’s notorious “three-strikes” law, aimed at imposing harsher sentences for crimes. Quigley was a 38-year-old Capitol Hill staffer and mother.

Late in the race, when the candidates were neck-and-neck in fundraising, the real estate industry dumped more than $270,000 in radio and TV ads for Costa. As a state senator, Costa had led the effort to ban most kinds of rent control in California. The disastrous 1995 law, known as the Costa-Hawkins Rental Housing Act, strictly limits the rent control policies cities and countries can impose, incentivizes evictions, and is widely blamed for contributing to California’s affordable housing crisis. “We’re certainly doing our best to see Senator Costa wins,” the vice president of the National Association of Realtors, Steve Cook, said at the time.

Now, 14 years later, Costa has proven to be one of the most conservative Democrats in the House. In January 2017, he became a leader of the Blue Dog Coalition, which partnered with the party’s campaign arm to recruit and push congressional candidates to the right heading into the midterm elections, despite representing a reliably blue district. Since 2016, he has voted along with President Donald Trump’s agenda nearly half the time, according to one estimate of the 115th Congress.

He’s one of just a handful of Democrats who have joined Republicans in voting to erode environmental regulations, defend U.S. Immigrations and Customs Enforcement, and stall action on Saudi Arabia’s war in Yemen. While most House Democrats were working on articles of impeachment, Axios reported, Costa was one of six who decided to attend Trump’s White House congressional holiday ball. (Costa’s campaign did not return a request for comment.)

Next year, Costa will face the first serious primary challenge of his congressional career. Fresno City Councilmember Esmeralda Soria, a daughter of Mexican immigrant farmworkers, is aiming to unseat the eight-term incumbent. Costa has only ever had to fend off Republican opponents, and in 2014, almost lost his safe seat to an obscure, underfunded GOP challenger. Photo: Courtesy of Soria for Congress

Soria hopes to capitalize on recent pushback to Costa’s policies. Though a ballot measure to repeal the Costa-Hawkins Act was defeated last year, progressive activists’ work finally paid off in mid-September when California became the second state to institute a rent-control law. (The three-strikes law, which was significantly reformed in 2012, still disproportionately hurts communities of color.)

Both the party establishment and industry, as in 2004, are rallying behind Costa. California Sens. Kamala Harris and Dianne Feinstein have both endorsed him, along with state Attorney General Xavier Becerra. Recently, California Gov. Gavin Newsom began fundraising for Costa, reportedly headlining a fundraiser for the congressman earlier this month.

Costa’s biggest industry support comes from agriculture and oil and gas, and his long anti-environmental record has given him one of the lowest lifetime scores of any congressional Democrat from the League of Conservation Voters. Notably, he was one of 28 Democrats who voted to authorize the construction of the controversial Keystone XL pipeline in 2015. As Alex Kotch recently wrote in the investigative outlet Sludge, Costa is one of Koch Industries’ favorite congressional Democrats, and is one of only four Democrats who received money from the Koch’s corporate PAC after the 2014 election cycle.

There’s reason to believe Soria’s challenge is credible. Last month, Soria narrowly blocked Costa from winning the California Democratic Party’s early endorsement for the March primary, receiving 46 percent of the vote to his 49 percent. “That was huge for us, a huge win, because now the DCCC has to stay out of the race,” she said.

Soria, meanwhile, has won endorsements from State Sen. Anna Caballero, which she announced in late October, and labor groups, including IBEW Local 100, Carpenters 701, and Teamsters 431. Curiously, Costa’s campaign announced an endorsement from Caballero in late November. (Soria confirmed it was a dual endorsement, also known as “pulling a Ro Khanna.”) Two other candidates, Republican Kevin Cookingham and Democrat Kim Williams, have also announced they’re running in the 16th district race.

Costa is one of four Democratic members of Congress to receive money from the Koch’s corporate PAC in the 2018 election cycle.

“People are pretty excited to hear that I’m running, and people finally feel — this is what they tell me — ‘Oh my God, we finally have a choice, we’ve never had a choice,’” Soria said. “And it’s being well-received across the board so that’s what motivates me and excites me because it is time for change in our community. I represent the future, and I’ve been doing the work here locally.”

Though the 37-year-old hopeful has called herself an “unapologetic progressive” and is running on a platform undeniably to the left of Costa’s, there isn’t anything particularly radical about her campaign. She has sworn off corporate PAC money, supports Medicare for All, and told The Intercept she supports the “principles” of the Green New Deal. But she’s also been described as “business friendly” and supportive of law enforcement during her time on the Fresno City Council.

Though Costa maintains a fundraising advantage over his opponents, with more than $575,500 cash on hand, Soria’s campaign has already raised over $150,000 in a third-quarter haul fueled primarily by small individual donors, according to recent FEC filings.

Soria said that she had been thinking about running for Congress because “things haven’t changed for the better in the community,” but was ultimately convinced when she reflected on the challenges her own family was facing.

Her father recently quit his job to care for her mother, who has Alzheimer’s disease. “My dad didn’t have a real pension and now he’s relying on being my mom’s home care worker, getting paid 20 hours a week on minimum wage,” she said. “And the increase in prescription costs, that became a very apparent issue in my family.”

“So what I realized was that the issue that my family is going through is no different than the majority of the working people in this district,” she continued. “In my opinion, we need a stronger voice, a voice that will represent working families and not corporate interests, and I think that is what has been the problem.”