“I fear that we’re being led down this path that you have to choose between being pro-minority/pro-equal rights and pro-police,” Buttigieg said in 2014. 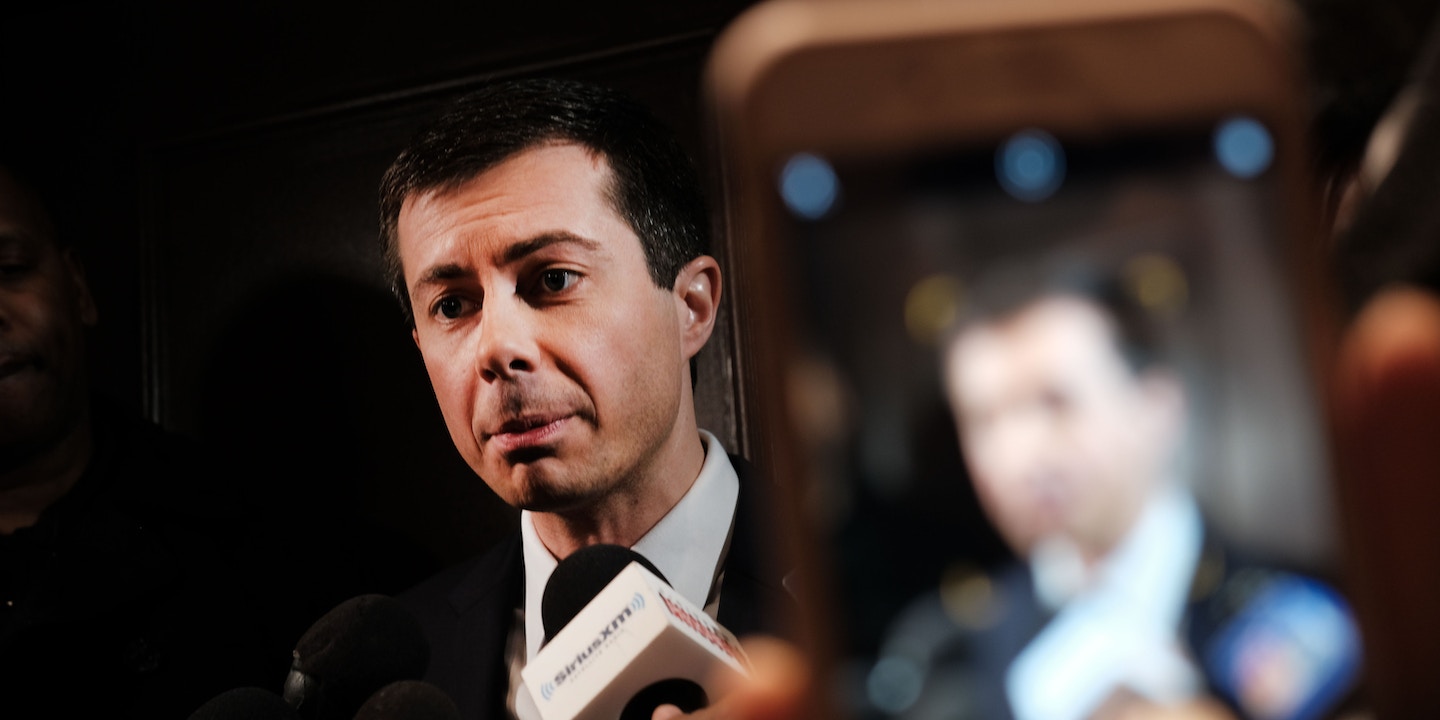 It was a sunny day in July 2014 when Eric Garner was killed. The 43-year-old African American man had been approached by New York City police officers on suspicion that he’d been selling loose cigarettes. After a few words were exchanged, the officers attempted an arrest. When Garner pulled away, the officers tackled him. One white officer put the father of six in a chokehold. As he lay face down on the ground under a pile of grown men, Garner pleaded for air. “I can’t breathe,” he warned a total of 11 times before losing consciousness.

An hour later, he was dead. The medical examiner ruled it a homicide and the autopsy implicated the police. When a video of the incident hit social media, it set off a firestorm. The killing became a watershed moment in the fight for racial justice and Garner’s final words a rallying cry. The impact was felt all across the country, including in the small Indiana city of South Bend, where 2020 Democratic presidential hopeful Pete Buttigieg was serving his first term as mayor. The moment would test the young politician and leave some in his community feeling as though he’d come up short.

Today, even after his rise in the polls in some early primary states, Buttigieg boasts negligible support among black Democrats, a key demographic in the race for the Democratic nomination. At the same time, his presidential campaign has put his record in South Bend — particularly on race relations — under a microscope. His response to the reverberations of the Garner killing in South Bend, where he tried to chart a middle ground between calls for racial justice and denial of the problem, is another example of what critics say is his failure to understand — and tackle — systemic racism. Buttigieg’s campaign did not respond to requests for comment.

On December 13, 2014, just five months after Garner’s death, during its televised warmup for its game against Michigan, the Notre Dame women’s basketball team wore black T-shirts with the words “I Can’t Breathe” emblazoned across the front in big white letters.

The ensuing, predictable controversy made it into the national news cycle. Following the game, Jason Barthel, a white police officer from the city of Mishawaka, began selling slogan tees of his own from his store, South Bend Uniform, which frequently did business with the city of South Bend, including a sale for $800 days before the basketball game. The shirts prominently featured a police badge over a thin blue line with the words “Breathe Easy” across the top and “Don’t Break the Law” on the bottom.

The shirts sparked outrage within the community and on social media. In a post on its Facebook page, South Bend Uniform tried to defuse some of the anger, explaining that “Breathe Easy” was actually “referring to knowing the police are there for you.”

“We are all one people and this is by no means is a slam on Eric Garner or his family, God rest his soul,” the post read. “Lets [sic] all band together as AMERICANS regardless of our feelings and know we can and will be better!”

Barthel, meanwhile, told the media that he had wanted to inject the police perspective into the conversation that was sparked by the Notre Dame women’s team.

“We’re here to protect the public, and we want you to breathe easy knowing that the police are here to be with you and for you and protect you,” he told CBS affiliate WSBT22.

In other interviews, however, he was more explicit about the shirt’s meaning and implications.

Three members of South Bend’s city council — including the body’s only two serving African American men — issued a statement with the president of the South Bend branch of the NAACP. The release condemned the shirts and requested that local vendors discontinue sales. It also had an ask for Buttigieg.

“In the past, the City of South Bend has done business with one of these local vendors,” it read, referring to South Bend Uniform. “It is our hope that Mayor Buttigieg and Mayor Wood of Mishawaka will join us in unifying our communities and not support this dangerous message.”

The first-term mayor, however, did not weigh in immediately, allowing the controversy to grow. When he did speak out during a local news interview, it was not the response the statement’s writers had hoped for.

Buttigieg asserted that the two sides of the controversy were really not that divided after all. “They’re being portrayed like they’re on two different sides, but they’re not even talking about the same thing,” he explained. “We’re talking about two different things. And one of those is the way that race is playing a role in our criminal justice system. And the other is about the safety of police officers who go out there every day and risk their lives. And I fear that we’re being led down this path that you have to choose between being pro-minority/pro-equal rights and pro-police.”

The mayor’s remarks on the controversy did not reassure his constituents who had wanted to see Buttigieg distance himself from Barthel’s message.

“He refused to touch it,” said councilmember-elect Henry Davis Jr., who was one of the drafters of the 2014 statement and launched an unsuccessful primary challenge against the mayor the following year. “And when he touched it, he agreed with both sides.” His 2015 run for mayor,  he said, was partly motivated by Buttigieg’s reaction to the shirts.

“I just really thought that he was very insensitive,” he continued. “I was looking for somebody to have a heart. We knew that the guy had just died from being choked to death. It was on video and it was clear on what happened with the police.”

Davis, who was re-elected to the city council this year, noted that the incident is a part of the mayor’s larger, problematic record on issues affecting the black community. He pointed out that during Buttigieg’s tenure, two unarmed black men have died at the hands of law enforcement. Demonstrators protest the shooting death of Eric Logan outside of the South Bend police station following his funeral on June 29, 2019, in South Bend, Ind.

Indeed, in 2012, shortly after Buttigieg entered office, Michael Deshawn Anderson died in police custody, prompting a wrongful death lawsuit, which Anderson’s family eventually dropped. In June of this year, 54-year-old Eric Logan was fatally shot by white officer Sgt. Ryan O’Neill, whose body camera was turned off at the time and who had an alleged history of making racist comments. The killing received national attention this summer in light of Buttigieg’s presidential run and even prompted the mayor to cancel campaign events to return home for a town hall where he was confronted by an outraged community.

He’s also come under scrutiny for his firing of South Bend’s first black police chief after it was revealed that he had improperly taped senior white officers making racist statements about him and other black officers. Buttigieg has since admitted that firing the police chief, Darryl Boykins, was a mistake, but he’s thus far refused to release the tapes. And while Boykins was fired, the white officers who were on the tapes faced no disciplinary action.

On the presidential campaign trail, the mayor’s campaign appeared to chalk up Buttigieg’s low levels of support among black voters to homophobia within the black community. The rollout of his Frederick Douglass Plan for Black America, meant to tackle systemic racism, was equally problematic, as the campaign claimed to have endorsements from 400 black South Carolinians, but subsequent investigation by The Intercept revealed that nearly half of the names were of white people. Moreover, some of the claimed endorsers had not actually signed on.

City Councilmember Oliver Davis, who also signed the 2014 statement, publicly rebuked Buttigieg late last month when he endorsed Joe Biden’s presidential campaign. Speaking about the young mayor’s difficulty reaching black voters, Davis told Politico, “For us, this has been a consistent issue that has not gone away.”

In his 2015 “State of the City” address, even as Buttigieg attempted to assuage concerns about the race-related controversies plaguing his administration, he used the phrase “all lives matter,” widely understood as a rebuke of the Black Lives Matter movement. The blunder resulted in fierce pushback from progressives when the speech resurfaced earlier this year. Buttigieg said he stopped using the phrase after he understood its implications.

Stories like these have not helped Buttigieg win over black voters. In the aftermath of the Logan shooting, an exasperated Buttigieg was caught on tape telling a black woman who’d asked how he expected black folks to support him, “I’m not asking for your vote.”

“You ain’t getting it either,” the woman responded.