The recent promotion of officer Dave Johnson is yet another example of the mayor’s failure to adequately address troubling race relations in South Bend. 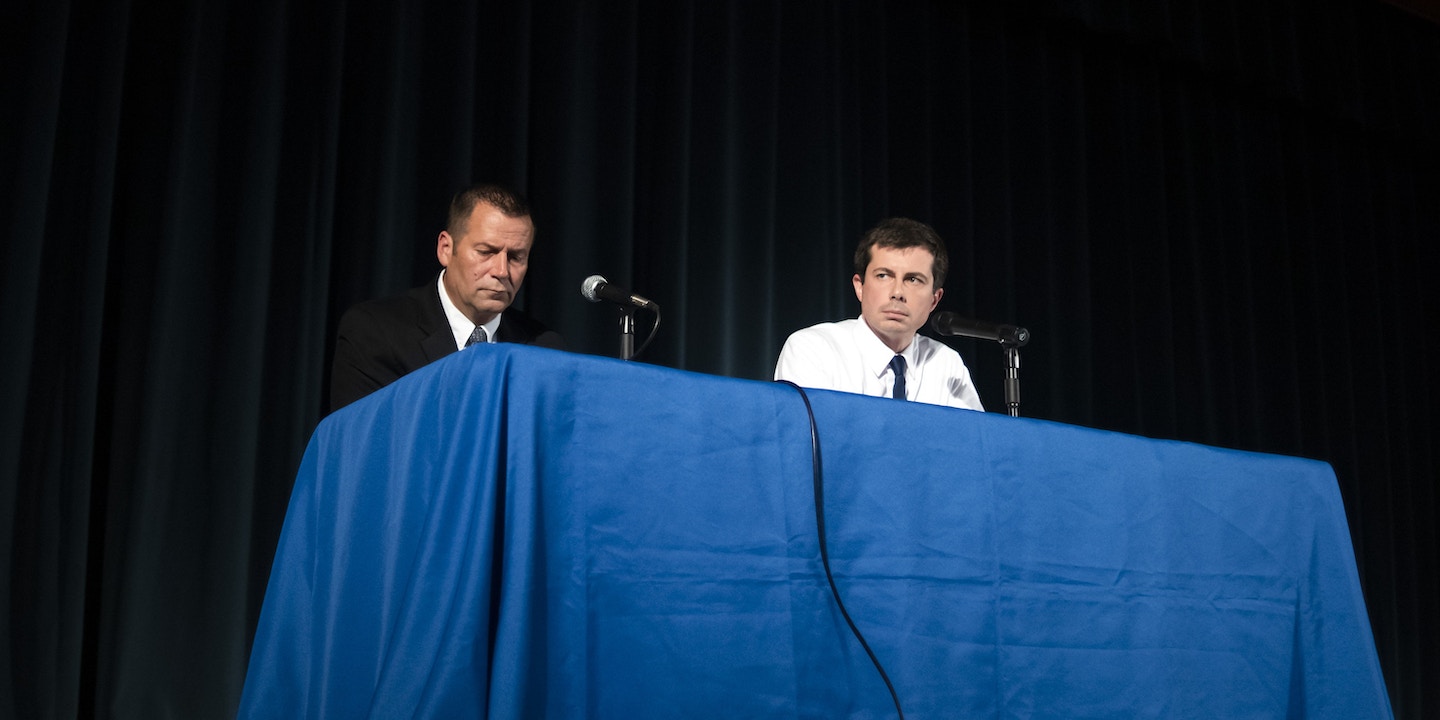 A South Bend, Indiana, police officer who was involved in the controversial 2012 death of a man in police custody was promoted in October at the recommendation of Police Chief Scott Ruszkowski, a close ally of Mayor Pete Buttigieg. Activists called on the mayor, now a leading Democratic presidential candidate, to fire Ruszkowski following a police shooting over the summer. The city’s recent promotion of officer David Johnson, Buttigieg’s South Bend critics say, is yet another example of the mayor’s failure to adequately address troubling race relations in the city he governs.

“This is why people in the black community have issues with police, because of these kinds of things,” Black Lives Matter activist Jorden Giger said. Giger is also a co-leader of Our Revolution South Bend and Michiana, which supports Vermont Sen. Bernie Sanders for president.

Johnson’s promotion to sergeant in special assignment was recommended by Ruszkowski and approved by the city’s Board of Public Safety, whose members are appointed by the mayor and which oversees administrative and disciplinary duties for police officers and firefighters. In 2012, Johnson and another officer chased Michael Anderson, who was suspected of stealing a moped, on foot. Anderson fled the police, but he was ultimately apprehended and found to be choking on bags of drugs and some cash. As Anderson sat handcuffed, Johnson went back to his squad car and returned with a plastic Slurpee-like straw, which he then put down Anderson’s throat in an ill-fated effort to retrieve the drugs.

Anderson died at a hospital later that night, a death that was later ruled accidental. Following an investigation, county prosecutors concluded that Anderson “died based upon his own actions.” At the time, activists called for St. Joseph County Metro Homicide Commander Tim Corbett and Lieutenant David Wells to step down over allegations they mishandled the investigation into the incident. The month following Anderson’s death, city council member Henry Davis, Jr., sent a letter to the Department of Justice calling for a federal investigation into the SBPD. (Davis launched an unsuccessful mayoral primary bid against Buttigieg in 2015.)

Anderson’s family later sued Johnson, a number of other officers, and city and county employees for negligence, excessive force, and failing to provide first aid or call paramedics in a reasonable amount of time, though they eventually dropped the lawsuit. The police department disputed the allegations. In 2010, Johnson was one of six officers sued for illegally searching the car of a driver they pulled over for speeding; a federal court ruled in favor of the driver.

The history of policing in South Bend has been a flashpoint in Buttigieg’s presidential campaign as he’s struggled to handle intensifying scrutiny of his nearly eight-year record as mayor. On the campaign trail, he has faced questions about the police department’s inadequate handling of race relations, as well as controversies over three police chiefs who’ve served since he took office in 2012, including Ruszkowski. Reached for comment, the mayor’s office referred The Intercept to Johnson’s personnel file, which includes a letter the South Bend Police Department sent to Johnson commending his efforts to attempt to save Anderson’s life.

In June, Buttigieg took a break from campaigning and returned to South Bend after then-Sgt. Ryan O’Neill shot and killed 54-year-old Eric Logan. The mayor appeared at a press conference and a town hall with Ruszkowski, facing questions from community members, some of whom wanted to see the police chief fired. During one confrontation that weekend, protesters asked Buttigieg whether he thought black lives mattered, and why he hadn’t fired Ruszkowski. Buttigieg accepted responsibility at the town hall for the city’s failure to successfully implement the use of body cameras and to recruit minority officers, but that did little to quell community members’ anger. Though O’Neill resigned in July, Black Lives Matter activists want Buttigieg to take further action and fire Ruszkowski. The activists were frustrated after Buttigieg told them during a private call in July that he would not fire the chief.

Buttigieg has been criticized for his handling of other issues related to police chiefs since he took office. In 2012, he was responsible for the controversial firing and subsequent demotion of the city’s former black police chief, Darryl Boykins. The mayor took heat over Police Chief Ronald Teachman, who black police officers said they felt was racist. Both Ruszkowski and Teachman were named in lawsuits by police officers alleging discrimination.

Wells and Corbett were both involved in the plot to oust Boykins, having been caught on police recordings at the station organizing an effort to have donors lobby Buttigieg to remove the chief. Wells, referring to Tim Corbett, said on one recorded call, “Tim says it is going to be a fun time when all white people are in charge,” according to former South Bend police communications director Karen DePaepe, who listened to the still-secret recordings. Brian Coffman, who represented Anderson’s family and is currently representing Logan’s family in a federal civil rights lawsuit, filed a motion last month to intervene in the pending legal battle to get those tapes released.

“We are going to claim that what is on those tapes potentially could have some type of ramification of why the shooting of Eric Logan occurred,” said Coffman, who will be filing another motion in the case on Friday. “And also the pattern and practice of the South Bend Police Department of not training their officers properly, and also not disciplining or suspending officers who have committed crimes or have violated civil rights of other citizens and no action is taken against them.”

Under Buttigieg, the police department has also struggled with recruitment: It wasn’t able to hire a single officer in its last two annual recruiting cycles, as the number of black officers serving in the city has declined from 29, when Buttigieg entered office in 2012, to 15 in 2019. During the June Democratic debate, the mayor acknowledged his failure to improve diversity in the police force, saying, “I couldn’t get it done.”

Buttigieg had just taken office at the time of Anderson’s death. But activists say in the years since, he hasn’t adequately handled their concerns with leadership and individual officers in the SBPD. While Buttigieg has made changes like requiring officers to take civil rights, implicit bias, and sensitivity trainings, Giger says the mayor has been more focused on quick fixes than changing the culture of the department.

Community activists have been pushing the mayor to establish an independent civilian review board for years. The South Bend Tribune echoed that call in a July editorial, saying that while Buttigieg “has spent much time talking about the issues of race and policing,” it was time for the mayor “to match action with words.” They wrote that the mayor has “been urged to take this step many times during his tenure as mayor — by members of the public, current and former members of the Common Council and by this board.”

Buttigieg has said that the Board of Public Safety is a comparable alternative to a civilian review board. Though activists feel the mayor has tried to incorporate some of their feedback, they say that the framing of the board shows there’s a limit to his understanding of the police department’s problems. While they are calling for an independent body solely focused on police misconduct, whose members are chosen in part by the public, the existing board has a broader administrative mandate and its members are appointed by the mayor. South Bend City Council Member Regina Williams-Preston, who unsuccessfully ran this year to replace Buttigieg as mayor, told the New York Times in April that Buttigieg’s equating of the two “was a betrayal.” The mayor’s campaign notes that through Buttigieg’s appointment of board members, it became majority-minority, and that this year for the first time, the city made applications for a vacant board seat open to the community.

The Board of Public Safety has recommended several changes to the police department in recent months, including updated policies on the use of body cameras, anti-bias training, and use of force.

The board has indicated that they’re open to adopting more stringent policies BLM has suggested, including anti-bias testing. “We have seen some forward movement,” Giger said. “But again, they haven’t been adopted yet. It’s our feeling that they’re sort of just dragging this process out so they can keep the heat off of Pete. I mean he’s barely here now anyway.” Earlier this month the board presented a series of recommendations to the department, but they did not include a separate civilian review board.

Following Logan’s shooting in June, the city set up community advisory meetings of the board of public safety to solicit input from South Bend residents on a range of issues. Those meetings have included discussion of policing policy, training, and procedures. Buttigieg didn’t attend any of the meetings until activists spoke to CNBC about his absence.

“Even though he talks about all this inclusion and all this stuff like, when you look at just the way that he’s ran his administration,” Giger said, “a lot of it has been very symbolic representation.”