A black South Bend resident was 4.3 times more likely to be arrested for possessing marijuana since 2012 than a white resident. Nationally, it was 3:1. 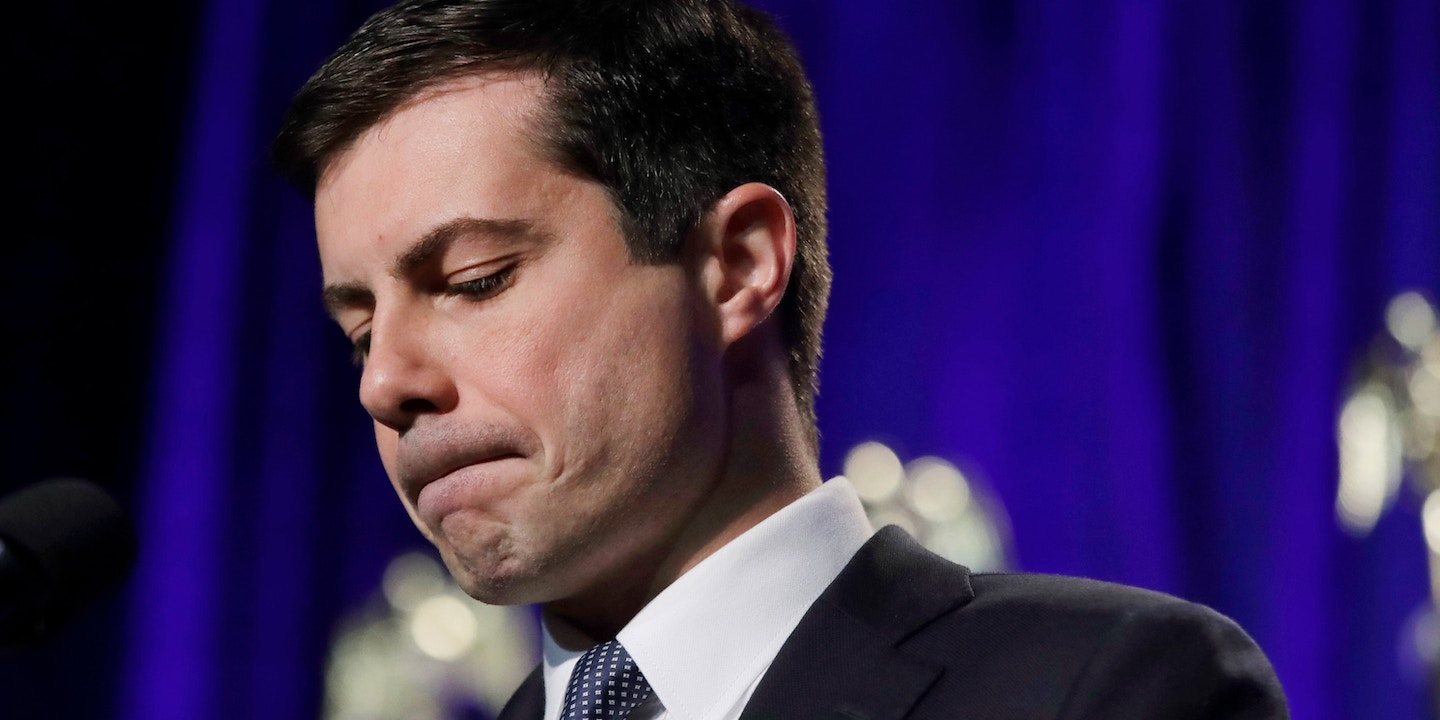 Pete Buttigieg wasn’t much of a pot smoker in college. But coming home from a party one evening, he bumped into a friend of a friend smoking a joint. Buttigieg later recalled that he acted out of curiosity. “Oh, is that — ?” the young Buttigieg said. “And she handed it to me.”

At precisely that moment, a police car pulled up. He quickly tossed the joint over his shoulder. Luckily for Buttigieg, it was a campus cop. Unluckily, he quickly found the roach on the sidewalk, berated Buttigieg, had him place his hands on the trunk, and searched him. Finding nothing more, he sped off, leaving Buttigieg with a story he still tells today of the first time he realized what it means to be privileged. “If I were not white, the odds of that having been something that would have derailed my life are exponentially higher,” he said at an event this spring. “It’s one of many reasons why I think we have to end the war on drugs and move towards the legalization of marijuana.”

It’s a theme Buttigieg returns to often. In July, at an event in Iowa, he shot down a racist question from an audience member by responding, “The fact that a black person is four times as likely as a white person to be incarcerated for the exact same crime is evidence of systemic racism.” When pressed by fact-checkers on his claim, he said that he was referring to the racial disparity in marijuana arrests nationwide, citing an American Civil Liberties Union study that found black people were 3.7 times more likely to be arrested for pot than whites.

"Racism is not going to help us get out of this," Buttigieg tells him, to applause. "Racism has no place in American politics or in American law enforcement. Next question." https://t.co/NkJuIoh4fP pic.twitter.com/iBt6pwnr2H

The disparity in South Bend, Indiana, however, has been significantly worse than that under Buttigieg’s leadership.

Since Buttigieg became mayor in January 2012, taking charge of the South Bend Police Department, the city’s black residents have been far more likely to be arrested for marijuana offenses than its white residents. That disparity in South Bend under Buttigieg, in fact, is worse than in the rest of the country, or even the rest of Indiana.

A black South Bend resident, under the Buttigieg administration, was 4.3 times more likely to be arrested for possessing marijuana between 2012 and 2018 than a white resident, according to data collected by the federal government. Meanwhile, in Indiana statewide during that time, according to data from reporting law enforcement agencies, black people were 3.5 times more at risk of a pot arrest; nationally, the disparity between the rates of black arrests and white arrests was 3 to 1. In the study Buttigieg cited to back up his claim in Iowa, the ACLU in 2013 found a 3.7 to 1 disparity nationally. The study is also referenced in Buttigieg’s Douglass Plan for Black America, which calls for marijuana to be legalized and arrest records to be expunged.

South Bend has a black population of roughly 27,000 and a white population of around 64,000, and local police have made 1,256 arrests for pot possession since 2012. Of those, 805 were black, while just 449 were white. Nationally, the rate of marijuana use is roughly equal for blacks and whites. The disparity in South Bend policing extends into other crimes: In 2018, 22 black people were arrested for selling weed in South Bend, while just 4 white people were taken in.

In 2018, 714 people were arrested for all drug-related offenses. Despite making up just a quarter of the population, more than half of those, 384, were black. While overall, South Bend was worse than both Indiana and the country as a whole, there were some individual years during which arrest rates for black people in South Bend were lower than the statewide average.

Sean Savett, a spokesperson for the Buttigieg campaign, wrote in a statement: “While mayors don’t make the law related to drug possession, Pete has been an outspoken advocate for legalization because he recognizes the disparate impact these laws have in devastating Black communities and the lives of Black Americans, particularly young Black men. It is also why he’s one of the only candidates to make eliminating incarceration for drug possession part of his presidential platform, and it’s why he’s proposed legalizing marijuana, expunging past convictions, reducing sentences for other drug offenses — and applying those reductions retroactively.”

Before Buttigieg entered office, according to testimony from a former city official, a small group of white police officers conspired to push the city’s black police chief, Darryl Boykins, out of his job, hoping to use donors to persuade Buttigieg to make the move. “It is going to be a fun time when all white people are in charge,” one officer reportedly said.

Buttigieg, amid a controversy over police recordings, did fire Boykins, but after protests from the black community, rescinded the firing and demoted him instead. Though the parties deny any involvement, the affair, Buttigieg later wrote in his memoir, “affected my relationship with the African-American community in particular for years to come.”

Henry Davis Jr., who was recently elected to a third term to the city council, told The Intercept he was unsurprised to hear the significant disparity in arrests. “It’s bad as hell here,” said Davis. “The numbers for African American police officers have dropped to historic lows.” He also said that Buttigieg has yet to make a human connection with the South Bend black community. “He feels like it’s an open book test: If I do these things, then I win,” he said. “He’s discounting the fact that he’s dealing with human beings.”

Davis lost to Buttigieg in a 2015 primary for mayor, and has often butted heads with the city over policing. In October 2012, after leaving a council meeting in which he voted against a police union contract, Davis was pulled over and detained at gun point. Davis, according to the dash cam video, protested that officers knew who he was. “I know exactly who you are,” one told him, explaining he had been pulled over for a “sudden lane change,” though there’s no evidence of such a lane change in the video. In the wake of the Boykins fiasco, Davis had reported the South Bend Police Department to the Department of Justice for an investigation into the racist remarks caught on police recordings, and the officers sued him for defamation, which was tossed out of court.

The mayor’s focus on police accountability in his presidential campaign is puzzling, he continued, “because we don’t see that here in South Bend.” Black Lives Matter activists held rallies in downtown South Bend in July and August to push the mayor on a set of demands for him and the police force — among them, the removal and demotion of several officers, including Chief of Police Scott Ruszkowski, who was implicated in suggesting to the mayor who should replace Boykins. BLM wanted the mayor to create a civilian review board for incidents of police violence, along with instituting anti-bias testing and updated bias training.

Buttigieg often touts the Board of Public Safety, Giger said, which oversees disciplinary actions for police and firefighters, and which includes three black men. (Indeed, after publication, a campaign spokesperson noted that the mayor-appointed board is majority-minority.)

Buttigieg in a 2017 address said that “complaints about the conduct of officers are rare” but “taken very seriously,” citing as proof the existing Board of Public Safety, what he called “one example of a ‘citizen review board.’” In an April story, South Bend City Council Member Regina Williams-Preston told the New York Times that the mayor’s suggestion “was a betrayal.”

“Citizens had asked for a citizens’ review board, and for him to say now we have one, in fact it’s the same thing we’ve always had, that was really disingenuous,” Preston told the Times. She did not immediately respond to a request for comment.

“They’re political appointments,” Giger said of the Board of Public Safety. Giger said activists have asked him remove and replace several members, but the mayor hasn’t. “He’s not using any of his political capital to address these issues here locally. I think he just wants to get away from South Bend as quickly as he can.”

Buttigieg has struggled to gain traction among nonwhite voters, polling close to zero among Hispanic and black voters. His chief piece of policy outreach to the black community, the Douglass Plan, led to controversy when The Intercept reported that two of the top three high-profile black South Carolina supporters touted by the campaign were not in fact supporters of the plan, or of Buttigieg.

Giger said he was unimpressed by the Buttigieg campaign’s explanation for his lack of black support, namely that black voters simply aren’t familiar with the candidate yet. “It’s very difficult to convince white moderates or white liberals to really get it,” Giger said.