In a 1998 address, he supported the ability of the court to try “these 100,000 bad kids” in the adult system rather than a separate juvenile system. 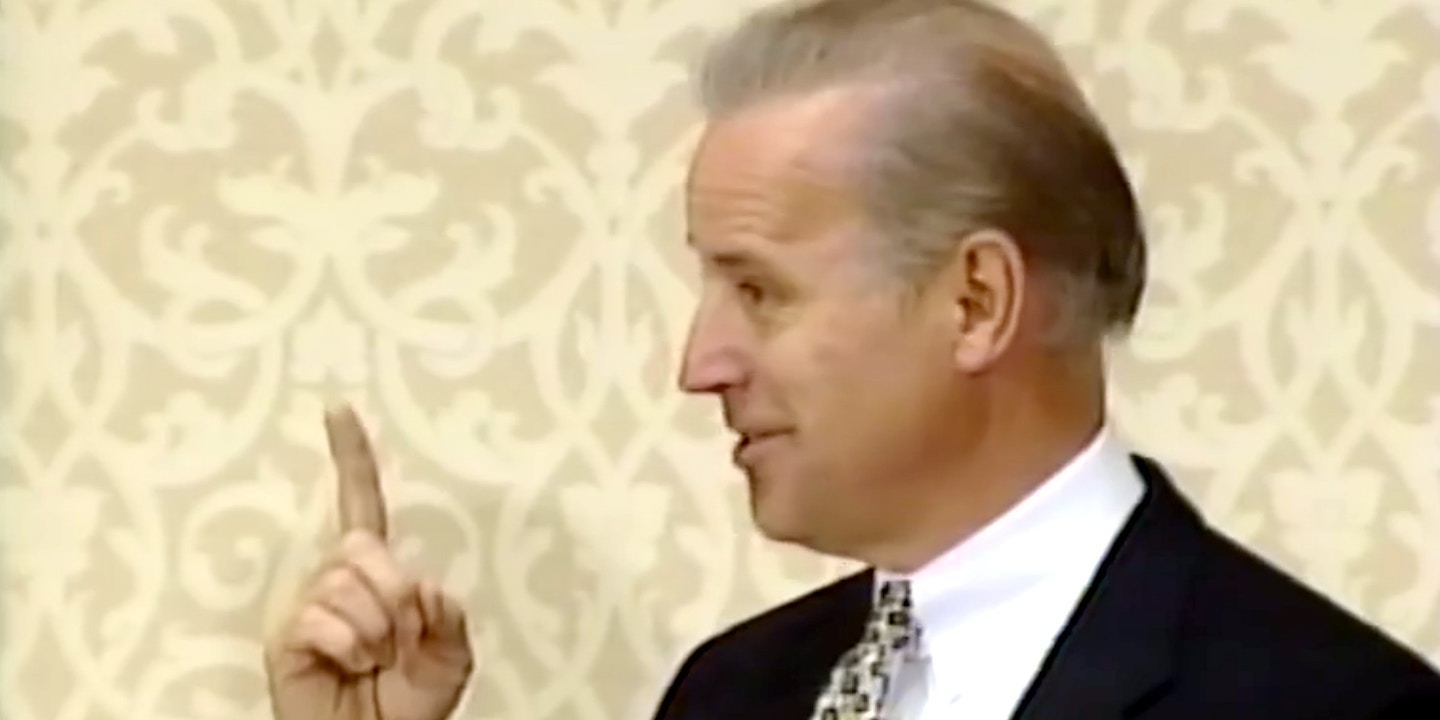 In a 1998 speech, then-Sen. Joe Biden called 100,000 juveniles who had been arrested for violent crimes in the U.S. “predators” who “warrant exceptionally, exceptionally tough treatment.” Biden — who spent decades championing tough-on-crime legislation that escalated mass incarceration — made the comments, which have not previously been reported, during an address to the National Association of Attorneys General conference in March 1998.

By that time, Biden had already become a face for tough-on-crime legislation, playing a critical role in the passage of a 1994 overhaul of the criminal justice system, the Violent Crime Control and Law Enforcement Act, which devastated low-income communities and communities of color for decades. In 1996, Biden, a longtime chair of the Senate Judiciary Committee, also co-authored and pushed a tough-on-crime bill that targeted juveniles. The Juvenile Justice and Delinquency Prevention Act of 1996 would have permitted the jailing of repeat truants and runaways. An editorialist for The Tennessean described the legislation as being aimed at “literally making men and women out of children.”

In the 1998 address, he went on to give his support for the ability to try “these 100,000 bad kids” in the adult criminal justice system rather than a separate juvenile system. (It’s not clear exactly where the 100,000 number came from, but in a 1997 press release, Biden said: “About 3,000 kids were arrested for murder in 1995, and a total of about 100,000 arrested for other serious, violent crimes — clearly these are the ‘lost’ children, all are not irretrievable, but plainly all must be subject to serious punishment.”)

“The second piece of this legislation goes out there and says, ‘OK, we’re going to get these 100,000 bad kids, and we’re going to try them as adults,’” he said.

“Well, that’s your judgment. You want to try them as adults, I leave that to — we have what we call competency hearings in our state. The court decides to try the kid as an adult. Well, if you wanna do that, I clearly see cases where that’s warranted. But that’s not my decision as a federal official. I shouldn’t tell you under what circumstances you must do that.”

Several early polls show that Biden has been losing support in key primary states, with Sen. Bernie Sanders surpassing him as the frontrunner. The former vice president’s decline has likely been fueled, in part, by his refusal to grapple with his past positions. (In the case of his record on Social Security, he flat-out lied.)

Though Biden’s tough-on-crime rhetoric was in line with the panic of the 1990s, his use of the term, “predator,” even then, puts him at odds with a Democratic Party that largely denounces the language as racist. During the 2016 Democratic primary, the Trump campaign resurfaced Hillary Clinton’s 1996 use of the term “superpredator” to describe children involved in gangs. Black Lives Matter activists confronted the candidate over her use of the term during a private fundraiser, demanding an apology. And in an essay for The Nation, author and law professor Michelle Alexander called the comments “racially coded rhetoric to cast black children as animals.” At a Democratic primary debate in April 2016, Sanders was asked why he criticized Clinton for using the word 20 years prior. “Because it was a racist term, and everybody knew it was a racist term,” Sanders responded to cheers.

Last May, Trump slammed Biden for his role in passing the overhaul, tweeting that anyone associated with the 1994 crime bill will not have a chance of being elected. “Super Predator was the term associated with the 1994 Crime Bill that Sleepy Joe Biden was so heavily involved in passing,” Trump followed up in a tweet. “That was a dark period in American History, but has Sleepy Joe apologized? No!” (Trump has still not apologized for calling for the executions of the Central Park 5, five black teenagers who were falsely accused of rape of a female jogger in 1990.)

Biden also used the term “predator” to justify aggressive sentencing in a 1993 speech, which CNN wrote about in March 2019, when he warned of “predators on our streets” who were “beyond the pale,” arguing that the justice system did not know how to rehabilitate them. He described tens of thousands of young people as “born out of wedlock, without parents, without supervision, without any structure, without any conscience developing because they literally … because they literally have not been socialized, they literally have not had an opportunity.”

The Biden campaign did not provide comment. But a campaign spokesperson told CNN in March that Biden’s strong rhetoric “was in response to Republican critiques that past efforts had been too soft on crime,” adding that he was referring specifically to violent crimes and not “a kid stealing a candy bar.”

Even at the time, Biden’s stance was seen as extreme. “In true bipartisan spirit, Sen. Fred Thompson, R-Tenn., has joined Sen. Joseph Biden, D-Del., to sponsor what’s considered a mild bill. Mild though it may be, it’s pretty awful,” The Tennessean wrote in 1996 about Biden’s youth crime act. “In fact, their bill doesn’t target the most violent of juvenile offenders; the legislation seems designed solely to make an example. Their bill would allow juvenile judges to lock up truants and runaways for up to three days in adult jails.”

Days before President Bill Clinton’s second inauguration, Biden said he wanted youth crime legislation modeled after his controversial 1994 crime bill. (Sanders did vote for the 1994 bill, which enjoyed wide support at the time, but has since expressed regret for supporting “a terrible bill.”) The punitive legislation, which passed Congress and was signed into law by Clinton, helped create an era of mass incarceration that disproportionately hurt black and brown Americans.

“Ninety percent of what we’re proposing in this major Democratic initiative could be a Republican initiative,” Biden said at a 1997 press conference. “Our thrust here is very straightforward: We want to continue the success on the 1994 Biden or Clinton crime law that is now in place.”

Biden also criticized a Republican crime bill he believed didn’t go far enough, saying in a press release from his office that “we have some number of children who are tragic cases — so violent that we really have no choice but to get them behind bars and keep them there, for a long time.”