A new poll tracks a dramatic shift in attitudes toward sex work, marking a victory hard fought by sex worker organizers on the front lines. 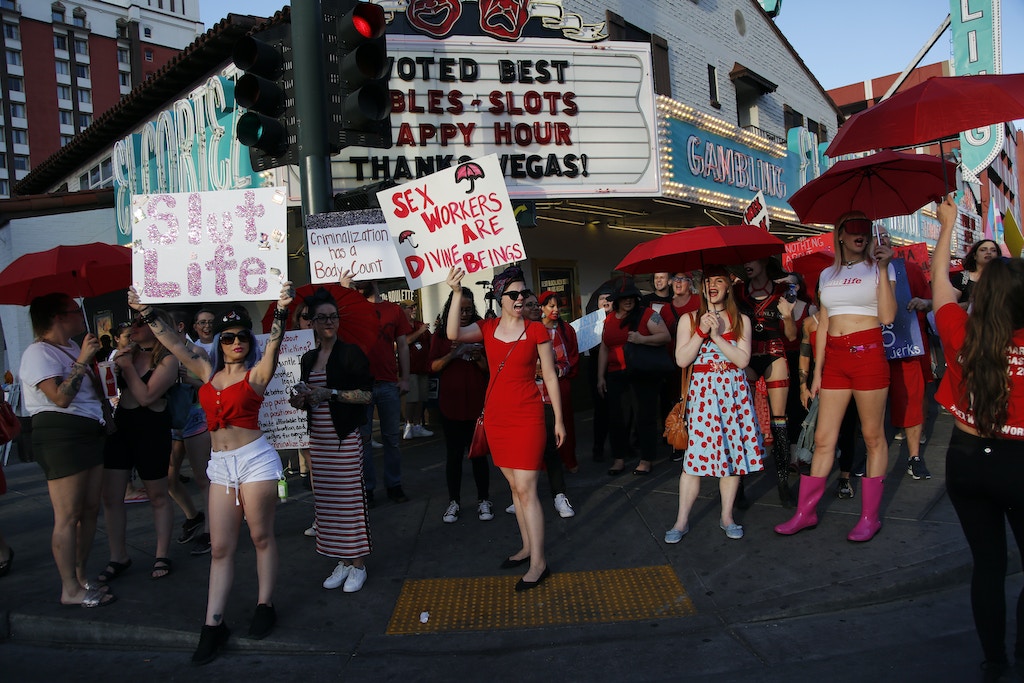 People march in support of decriminalizing sex work and against the Fight Online Sex Trafficking Act and the Stop Enabling Sex Traffickers Act on June 2, 2019, in Las Vegas.

As recently as spring 2018, every single Democratic presidential candidate who was then in Congress — from progressive Sen. Bernie Sanders to conservative Sen. Amy Klobuchar — voted for a bill that expanded the criminalization of sex work and imperiled sex workers nationwide. The Stop Enabling Sex Traffickers Act, later combined with the Allow States and Victims to Fight Online Sex Trafficking Act to form the pernicious FOSTA-SESTA legislative package, sailed through both the Senate and the House with bipartisan support. The voices of sex worker organizers, who correctly stressed that the law would deny sex workers crucial online resources and networks while failing to end trafficking, were roundly ignored.

Fast forward nearly two years and the Democratic consensus around the criminalization of sex work has, thankfully and finally, seen a most dramatic shift. As a report published today by a coalition of organizations, including Data for Progress, the American Civil Liberties Union, Mijente, and the Human Rights Campaign noted, “For the first time in presidential primary history, 2020 candidates have competed for a progressive position on the sex trade.” While the issue has arisen as more a talking point than a clear policy proposal for the candidates, the positioning away from criminalization is marked.

The report, released on Thursday alongside two new national polls, does not just focus on sex work decriminalization as an electoral issue — it also surveys and commends a significant shift in public support, especially among young people, for seeing sex work decriminalized.

The Democratic consensus around the criminalization of sex work has, thankfully and finally, seen a most dramatic shift.

National polling carried out by Data for Progress and YouGov Blue found that two-thirds of voters aged 18 to 44 support the full decriminalization of sex work; two-thirds of Democratic voters of all ages agree, compared to 37 percent of Republicans and 55 percent of independents. “Fully 52 percent of voters somewhat or strongly support decriminalizing sex work,” noted the report, authored by Data for Progress fellow Nina Luo, who is also an organizer with Decrim NY, a coalition pushing for decriminalization, the decarceration of sex workers, and the destigmatization of the censured industry. In a similar poll taken just seven month earlier, 45 percent of overall voters supported decriminalization; support among Democratic voters has increased from 56 to 61 percent.

Sex work decriminalization should not be considered a fringe issue. It intersects many of the most urgent political struggles of our time: the fight to end mass incarceration, racial profiling, and transphobic police violence; the demand for a social safety net; and robust and protections for all workers. To fight for the decriminalization of sex work is to fight for and with society’s most vulnerable and marginalized communities, in particular women of color and of immigrant backgrounds, especially trans women who often rely on sex work when discriminated against in other industries. Black women account for 94 percent of people arrested for the absurd and capacious charge of “loitering for the purposes of prostitution” in the New York City boroughs of Brooklyn and Queens. Thus, to ignore the struggle for sex workers’ rights is de facto to allow their lives not to matter.

According to Luo, it is in part the growing recognition of the necessity of these connected struggles that accounts for the increased support for sex work decriminalization. “Living wages haven’t risen and 13 percent of Americans know someone who has died because they couldn’t afford health care,” Luo told me, noting that “people are in economically desperate situations and increasingly understand that people do things for survival, that survival work is work, that sex work is work.” Full decriminalization would recognize that as work, sex work is not the business of the police and courts. For many, sex work may not be good work, or always free of exploitation, and it may be resorted to when there are few other options. But the very same is true of many jobs in which workers are nonetheless deemed worthy of rights and legal protections as workers.

Luo also attributed the changing views on decriminalization to the sex worker movement’s alignment with a multiracial coalition and “a rising left.” There’s little doubt that the infusion of new, decidedly left-wing blood into parts of the Democratic political landscape has pushed the issue to the fore in state houses nationwide. New York and D.C. have introduced bills to decriminalize sex work, and similar efforts are gaining ground in California, Oregon, Illinois, Vermont, Connecticut, and Colorado, the report noted. Progressive politicians like Rep. Ro Khanna, D-Calif., deserve credit for new efforts to repeal FOSTA-SESTA, and left-to-liberal NGOs getting behind the issue are to be commended. But the long overdue shift in political consensus was hard fought by sex worker organizers on the front lines.

The report includes testimonies from a number of sex workers and former sex workers attesting to the violences enacted through criminalization. Bianey Garcia, a trans rights organizer with immigrant advocacy group Make the Road, who emigrated from Mexico as a teenager to escape LGBTQ persecution, was fired from her restaurant job in the U.S. when she transitioned on hormones. Having previously been a victim of sex trafficking, Garcia then turned to consensual, independent, survival sex work. “I’ve been arrested four times for prostitution,” she notes in the report, “Only once was I actually doing sex work, the other three arrests were just profiling because I’m a trans woman.” Another testimony, from Victoria Walker, who turned to sex work for survival, recalls that each time an aspect of the industry was further criminalized, the work became more dangerous. For example, FOSTA-SESTA led to the shuttering of sites where workers could screen clients and connect to other members of the community. “If sex work were decriminalized,” notes Walker, “the sex worker community could find each other again and feel safe by having each others’ backs.”

“If sex work were decriminalized, the sex worker community could find each other again and feel safe by having each others’ backs.”

It is only full decriminalization that can lay the ground for sex workers to obtain the rights they well deserve. The so-called Nordic model, in which only buyers of sex or third parties face criminalization, forces sex workers into the shadows and continues to entrap sex workers and their loved ones in the system of carceral injustice. Examples abound of sex workers being arrested for soliciting under such laws. The new report notes that under the Nordic model, pitched as legislation to protect sex workers, Norway “evicted more than 400 sex workers, primarily migrant women, from their home.” Full decriminalization will not offer economic justice and material safety for the vulnerable people who turn to sex work for survival, but it would remove at least some of the grounds used by the police and state to further oppress these communities.

And it is support for full decriminalization that the new polls reflect. Respondents were asked whether they would support sex work following the example of New Zealand, which in 2003 did away with “criminal penalties for adults to sell and pay for consensual sex while also maintaining laws that criminalize violence.” New Zealand has not seen the sex work industry grow since it was decriminalized, according to the report, but 90 percent of people trading sex said decriminalization gave them employment, legal, and health rights, while 64 percent found it easier to refuse clients.

Luo told me that the shift in support for decriminalization, especially among young people, is a “momentous” indication of “where the future is for the issue,” but the organizer was clear that barriers to full decriminalization, decarceration, and destigmatization remain steep. She highlighted that beliefs in carceral approaches to ending violence and exploitation, transphobia, fearmongering, and myths about trafficking persist with force, as do reactionary and powerful police unions lobbying for criminalization. She added, though, that “perhaps the greatest barrier of all” is that people who are inoculated from deprivation and discrimination “find it unbelievable that people living at the intersections of marginalization and oppression often trade sex to survive.” As Luo put it, “it gets at the very core of who we are as a society, pretty immediately.” And to reckon with the realities of survival sex work and the added brutality of its criminalization is to understand that this society needs changing at its core.