Immigration and Customs Enforcement officials in San Antonio, Texas, have been systematically denying parole to large numbers of people who were detained after crossing into the United States hoping to apply for asylum. Instead of being allowed to join family or sponsors and work on their cases in the U.S., many migrants are being held without a chance of release while they wait for court dates.

According to documents reviewed by The Intercept and lawyers working in the area, ICE’s San Antonio field office has been refusing parole for any detainee subject to a new Trump administration policy known as the transit bar, which makes migrants ineligible for asylum if they did not ask for protection in countries they crossed on their way to the U.S. The bar applies to most non-Mexicans arriving at the southern border.

On one form shown to The Intercept by an attorney with the legal services provider American Gateways, ICE explicitly stated that the transit bar was the sole reason that their client was denied release after a parole interview on September 25, 2019, about two weeks after the Supreme Court allowed the bar to take effect. Another denial notice sent to a different attorney contained similar language.

Agents in El Paso had been issuing the same kind of denials, though they appear to have changed course a little over a month ago. “In El Paso, there was a blanket rule that everyone was denied parole, if they were subject to the bar. That was for sure,” Taylor Levy, an El Paso-based attorney, told The Intercept. She added that some of her denials had been readjudicated and granted starting in late January.

In the San Antonio sector, the policy is still in effect but is apparently being applied erratically. “It hasn’t seemed to be consistent even within our field. … Port Isabel Detention Center was still releasing people on parole, while the [T. Don Hutto Residential Center] has not been, pretty much as long or longer than [the South Texas Detention Facility at] Pearsall,” said Sara Ramey, executive director for the San Antonio-based Migrant Center for Human Rights. Some of the inconsistencies may be due to the fact that, according to several attorneys, the orders appear to be coming from supervisory officers in each field office as opposed to ICE headquarters.

Denise Gilman, director of the Immigration Clinic at University of Texas School of Law, also pointed to Hutto — a women’s detention center with a capacity of about 500 people, managed by the contractor CoreCivic — and Pearsall — a GEO Group-run detention center that holds around 1,900 people. Hutto, she said, “is filled with Cameroonian and Congolese women who are being stuck in detention throughout their entire case.”

“Nine months ago, those Cameroonian women would have gotten out the minute they passed their credible fear interview,” she added, referring to the first step in the asylum process.

Denying parole en masse is likely illegal, according to Michael Tan, deputy director of the American Civil Liberties Union’s Immigrants’ Rights Project. Two federal court rulings have blocked the government from applying generalized parole denials to asylum-seekers specifically. It appears that ICE in San Antonio (and previously, El Paso) is relying on the legal reasoning that migrants subject to the transit bar were not covered by those rulings, because they no are longer considered asylum-seekers. But the parole statute itself specifies that decisions are to be made on a “case-by-case basis.”

“Nine months ago, those Cameroonian women would have gotten out the minute they passed their credible fear interview.”

Tan, who was involved in the earlier parole litigation, said that if ICE continued to default to detaining people instead of considering parole, “we would seriously consider bringing an additional legal challenge.”

ICE did not respond to several requests for comment to its El Paso office and headquarters in Washington, D.C. The Intercept was unable to confirm whether other field offices had experienced the same issue. Attorneys dealing with ICE’s San Diego office said it had not come up. 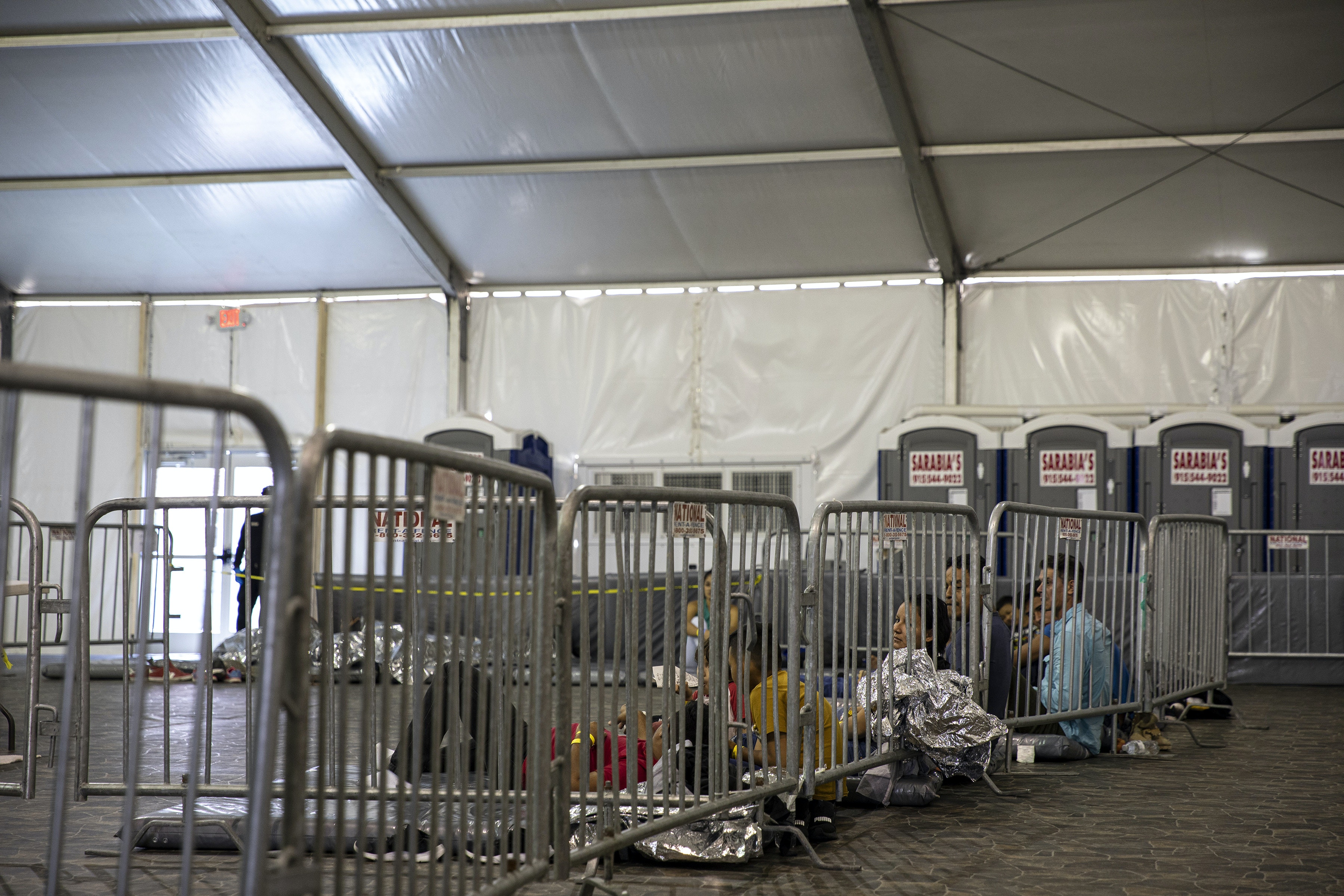 Migrants at the El Paso Border Patrol Station No. 1 are given mylar blankets as they wait on Aug. 1, 2019.

Most migrants affected by the blanket parole denials come from outside the Western Hemisphere, because they are not currently subject to new Trump administration policies that are returning many asylum-seekers to Mexico to await their hearings, or sending them to Guatemala or Honduras, to seek asylum there.

For those who are detained in the U.S., the administration has tried to block access to the two paths out of detention: bond or humanitarian parole. In April 2019, Attorney General William Barr used the power of his office — which oversees the nation’s system of immigration courts — to rule that migrants arriving to claim asylum were not eligible for bond. A federal court blocked Barr’s ruling and ordered the government to resume bond hearings for asylum-seekers, though BuzzFeed News recently reported that eligible migrants were being denied those hearings in El Paso and Otero, New Mexico (which falls under the El Paso sector), as late as January.

The majority of migrants detained while arriving in the United States aren’t considered to qualify for bond, leaving them with only the option of parole. It is offered at the government’s discretion for reasons such as pregnancy, medical conditions, being a minor, or for anyone whose detention is deemed “not in the public interest.” Since 2009, ICE has had a directive to presumptively release people who pass credible fear interviews and are continuing the asylum process. The agency hasn’t always followed it: This week, civil rights groups sued ICE’s New York field office over revelations that it has used a rigged algorithm to recommend whether people should be detained or released, resulting in almost everyone being detained.

In a July 2018 decision, a federal judge found that five ICE field offices — including El Paso — weren’t complying with the agency’s own directive and were issuing blanket denials of parole regardless of circumstances. Parole grants out of those offices had collectively dropped from about 90 percent to near zero. The judge ordered the government to stop issuing denials without making “individualized parole determinations” (and later made a similar ruling in another case involving a different field office). However, these specific orders don’t seem to apply to migrants who can no longer seek asylum.

There have been seven deaths in ICE custody so far in the 2020 fiscal year alone.

Remaining in detention as court dates approach isn’t merely bothersome. It severely hampers migrants’ ability to prepare complex, document-heavy cases. Conditions in detention facilities can be horrific and incentivize migrants to abandon their cases rather than risk their health in prolonged detention. There have been seven deaths in ICE custody so far in the 2020 fiscal year alone.

Since they now don’t qualify for asylum, people subject to the transit bar face even tougher odds of being released from detention and ultimately winning any chance of staying in the U.S. They can still seek two other forms of protection: “withholding of removal” or protections under the Convention Against Torture, though those are less robust and require a higher burden of evidence than asylum. ICE seems to have used this fact as a reason to deny parole, claiming that the difficulty in winning these cases means that these people pose a greater “flight risk” and may not return for their court hearings.

In an email dated January 6 and shared with The Intercept by an attorney who works with detained migrants in the El Paso area, an ICE deportation officer wrote “[y]our client’s parole was denied again due to his asylum bar.” The officer added, “ICE considers him a flight risk due to the withholding of removal proceedings,” and “ICE determined that there is no guarantee that your client will show up for removal if a safe third country will accept him.”

This last bit is in reference to the fact that, unlike asylum, withholding is not designed to lead to permanent residency. It does not prevent the U.S. government from sending a noncitizen to a third country, or even returning them to the place they fled if the U.S. decides that circumstances have changed to make it safer.

It’s not clear why the El Paso area ceased its blanket denial policy in January. It may have had to do with overcrowding, which was already a problem months ago. Quartz reported in September that the San Diego and El Paso Border Patrol sectors were urgently seeking additional storage space for detention-related supplies. In May, the Department of Homeland Security’s Inspector General found that Border Patrol’s El Paso Del Norte Processing Center was wildly and dangerously overcrowded. (Recent migrants are initially held in Border Patrol custody before being transferred to ICE, so if ICE lacks detention space, people stay longer in Border Patrol facilities.)

Blocking access to both bond and parole for migrants detained in the El Paso sector would mean that ICE’s detention facilities — and by extension, Border Patrol’s — would have been taking in more detainees and releasing very few, as large numbers of asylum-seekers from Central America continued to arrive at the southern border. The fact that ICE eased access to bond and parole at about the same time last month in El Paso further suggests that the decisions may have stemmed more from practical concerns than from legal worries about parole denials. Attorneys operating in the San Antonio area said detention centers there appeared to still be below capacity.

Linda Corchado, the director of legal services at the El Paso-based Las Americas Immigrant Advocacy Center, said that the rollout and subsequent reversal of the policy in El Paso pointed to a pattern of “arbitrary denials.” At “one period of time, an entire class is barred then suddenly, that bar is lifted,” she said.