With the coronavirus sweeping the country, federal defense attorneys and court officials witnessed a rare pause in the longstanding prosecution pipeline. 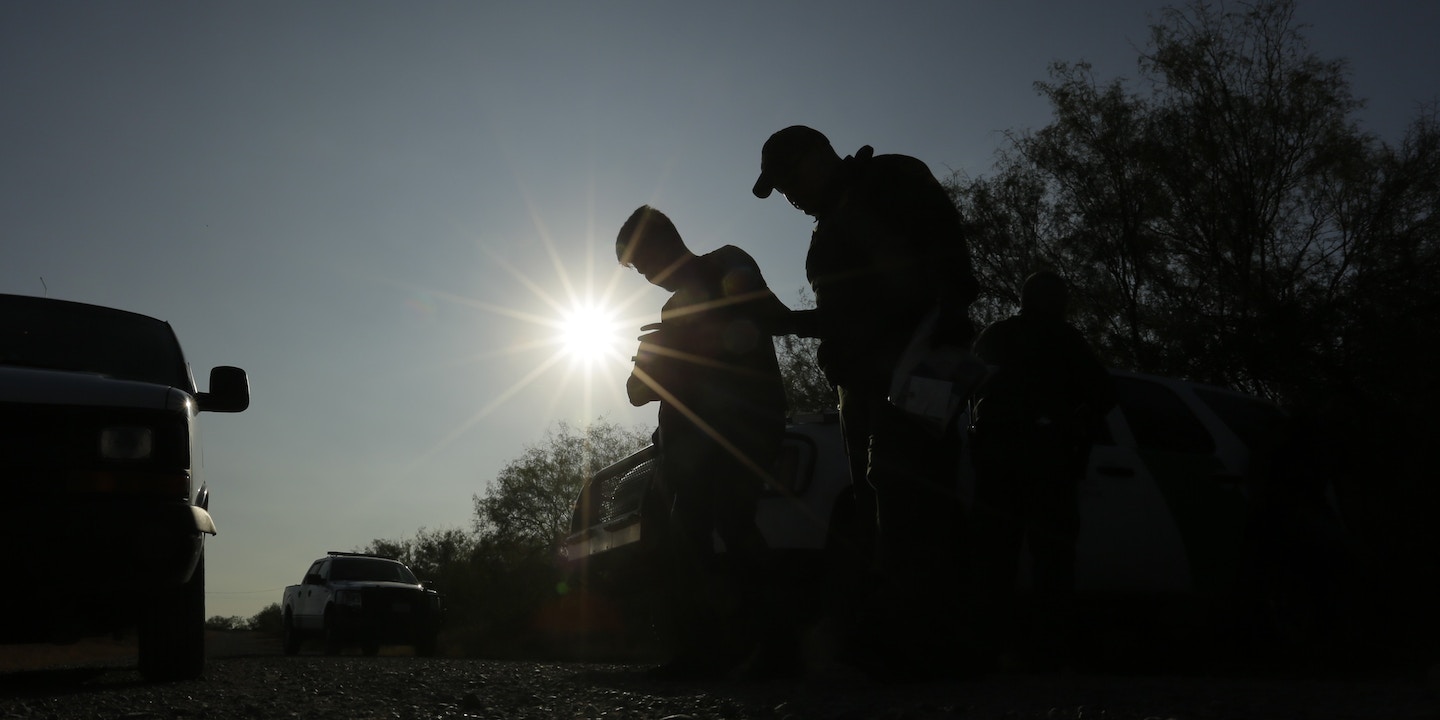 While much of the nation’s immigration and detention apparatus marches on in the face of the deadly coronavirus pandemic, one of the most controversial immigration enforcement programs of the past 15 years was brought to a rare halt on Monday, with courts across the border suspending mass prosecutions of immigrants accused of crossing the border illegally.

In Tucson, Arizona, where groups of up to 70 people at a time are routinely prosecuted under the program known as Operation Streamline, federal defense attorneys showed up to court on Monday to find the building’s usual mass hearings were canceled. In San Diego and South Texas, meanwhile, federal public defenders received word from the U.S. Attorney’s Office that the government would not be prosecuting individuals accused of crossing the border illegally for the first time. The same was true in New Mexico, where federal public defender Stephen P. McCue said it’s not uncommon for attorneys in the state’s Las Cruces division to see up 100 defendants in court to face low-level border crossing charges in a single day.

“There’s no such thing as social distancing when all the defendants are all chained up in the courtroom, and you have to talk to them through an interpreter,” McCue told The Intercept. “Under the best circumstances, it’s chaotic, and it’s simply not compliant with the health declarations that New Mexico has in place or that the federal government has in place.”

The nation’s two central border crossing laws are commonly referred to by their sections in Title 8 of the U.S. Code; 1325 stipulates that it is a misdemeanor offense to enter the country without papers, and 1326 makes it a felony to reenter the country after being removed by the government. Though nearly everything that happens in the immigration legal sphere is a civil matter, enforcement of these two criminal laws has been a driving force in making immigration the leading category of crime on the federal docket. Recently, the statutes provided the basis for the Trump administration’s “zero tolerance” initiative, in which thousands of children were forcibly separated from their parents, and it was the elimination of 1325 in particular that former Housing and Urban Development Secretary Julián Castro called for in his bid for the White House.

In addition to contributing to a historic shift in immigration enforcement, Operation Streamline has become an unparalleled pipeline for the criminalized gathering of human bodies on the border — an obvious problem as the highly contagious coronavirus continues to spread and cases continue to mount.

In interviews, federal public defenders and court officials across the border described variations in how suspensions of these prosecutions are currently playing out. While defense attorneys in Texas, New Mexico, Arizona, and California all said that 1325 prosecutions in their areas had been paused, only McCue, in New Mexico, said his state had halted 1326 reentry prosecutions as well. And even then, the defense attorney stressed, the pause is limited to those who have been previously deported but do not have prior criminal history beyond that. “I think it’s very much to their credit that they’ve suspended it,” McCue said of the government’s decision not to bring those cases but, he noted, this does not mean “they’ve opened up the border.”

Pausing or declining to criminally prosecute an individual for crossing the border without papers may remove them from the Justice Department’s criminal justice system, but they still have Department of Homeland Security’s court and detention system to contend with. “These people are still being deported,” McCue said. “There are still civil sanctions being imposed on these people, but they’ve curtailed the federal crime side of prosecutions temporarily until the dust settles.”

Sources who spoke to The Intercept expressed uniform uncertainty about where the current hold on criminal border-crossing prosecutions will go to next. On Tuesday night, the New York Times reported that the Trump administration is pushing forward with a plan to “immediately turn back all asylum seekers and other foreigners trying to cross the southwestern border illegally,” ensuring that migrants and “asylum-seekers would not be held for any length of time in an American facility nor would they be given due process.”

“There’s no such thing as social distancing when all the defendants are all chained up in the courtroom, and you have to talk to them through an interpreter.”

In Arizona, Acting District Court Executive Deb Lucas said she assumes that her state’s current one-week pause on Streamline hearings will be extended, though she couldn’t say for certain. The hold on prosecutions was designed to “give ourselves a pause,” Lucas told The Intercept, “to figure out how we’re going to handle these proceedings from here forward.” Lucas added that her office was working the U.S. Attorney’s Office, the Marshals service and immigration attorneys in devising a path forward. All of those entities, Lucas said, “are concerned about the numbers and the transporting of these individuals, and housing them all in one area and bringing them into the courthouse.”

While the Department of Justice did not respond to questions regarding the suspended prosecution of the border-crossing statutes, a press officer at the U.S. Attorney’s Office in Arizona provided The Intercept with a memo that Attorney General William Barr sent to federal prosecutors nationwide Monday. Though the document did not address border-crossing statutes specifically, Barr did direct his attorneys to work closely with the chief judges in their districts “to ensure that every appropriate precaution is taken to protect the health of those who practice in or are called before our courts.”

Laura Conover, the Criminal Justice Act representative for hundreds of private lawyers who often provide legal defense for Streamline defendants in Tucson, told The Intercept that she first became concerned about the continuation of the enforcement program last Wednesday. “My sense was that Streamline was literally the epitome of a massive gathering of people.”

Conover had spent her day fielding questions from concerned lawyers and U.S. Marshals. She then spent her evening watching as her husband, a community college administrator, and his colleagues reached the conclusion that it was necessary to suspend onsite learning at campuses in southern Arizona. The following morning, Conover sent a memo to two supervising judges in Tucson laying out her concerns.

“If conditions are not safe enough right now for college students to remain on campus, then I must very humbly request that Streamline proceedings be temporarily suspended,” she wrote. “All detainees who are brought in to the Special Proceedings room in Tucson arrive with an immune system compromised to various degrees by exhaustion and dehydration.” Just last month, a federal judge in Arizona issued a permanent injunction against the Border Patrol’s Tucson sector, after a seven-day trial offered evidence of squalid and inhumane conditions in the agency’s holding cells. “Those detention conditions are highly favorable for the spread of germs,” Conover wrote. “Unlike other illnesses dealt with before, officials are concerned that patients may be positive for Covid before they are symptomatic.”

“Given all this, and despite the outstanding efforts by court administration and the Marshals, it seems that court staff present in the [Operation Streamline] courtroom in the morning, interpreters, deputy Marshals, attorneys, the detainees, and the bench are at a much higher risk than other populations currently receiving protection right now,” Conover went on to say. “This request is not made lightly. In fact, it is made with great trepidation. But it seems incumbent on me as representative of the panel to do so.”

Launched in 2005, Streamline has been a core component of the U.S. approach to border enforcement for three consecutive presidential administrations. For border hawks, the program is a key node in the government’s so-called consequence delivery system. For critics, the program is routinely held up as a glaring example of government resources gone to waste, and bedrock notions of American justice gone haywire.

Southern Arizona has long been home to the nation’s largest and most active Streamline pipeline. Typically, the people who appear in Streamline there have been arrested after spending hours, days, or sometimes weeks trekking through one of the most dangerous ecosystems on the planet — the Sonoran Desert — a journey that experts say is inherently compromising for the body’s immune system. They are then held for hours or days in the notorious Border Patrol detention cells cited in last month’s trial, often at one of the agency’s remote outposts. From there, they are generally moved onto buses, which private contractors then drive to downtown Tucson. The exhausted men and women are then marched through the bowels of the federal courthouse to appear before a judge, often dressed in the same clothes they wore when they crossed the desert.

For years, chained immigrant defendants in Arizona testified to their charges en masse, still wearing their chains — an American Civil Liberties Union lawsuit eventually put a stop to that. These days, the defendants remove their shackles in a hallway outside the courtroom, appear in smaller groups and enter pleas individually. The feeling of a conveyor belt prosecutions, however, remains. In 2014, former Magistrate Judge Bernardo P. Velasco boasted that his personal “record” for prosecuting dozens of defendants under Streamline was 30 minutes.

The Streamline suspension comes as stakeholders from across the immigration enforcement world are increasingly sounding the alarm that, in the shadow of the coronavirus, the nation’s detention and court system is a source of mounting danger for virtually everyone it touches — especially the tens of thousands of men, women, and children currently in government custody. On Sunday night, the leading unions representing Immigration Customs Enforcement prosecutors and immigration judges, as well as a national association of more than 15,000 immigration attorneys and law professors, issued an unprecedented joint letter calling for the immediate shut down of immigration courts across the country. “Our nation is currently in the throes of a historic global pandemic,” the groups wrote.

Shortly before midnight last night, the Department of Justice announced by tweet that it was postponing immigration hearings at several courts across the country.

Conover, who is currently running for Pima County attorney, said that her decision to speak out over Streamline’s continuation was not easy. “It’s sort of like looking at just a huge behemoth, a massively funded program, and saying we should pause this,” she explained. “Writing that memo to the bench about a program that’s so powerful and so entrenched was a really frightening moment, to be honest,” she said. “But I couldn’t not write it.”