With Coronavirus Spreading, Mexico Vowed to Empty Detention Centers — But Migrants Were Thrust Into Chaos and Danger

The U.S. has expelled 20,000 migrants amid the coronavirus pandemic, leaving them with dire options in Mexico. 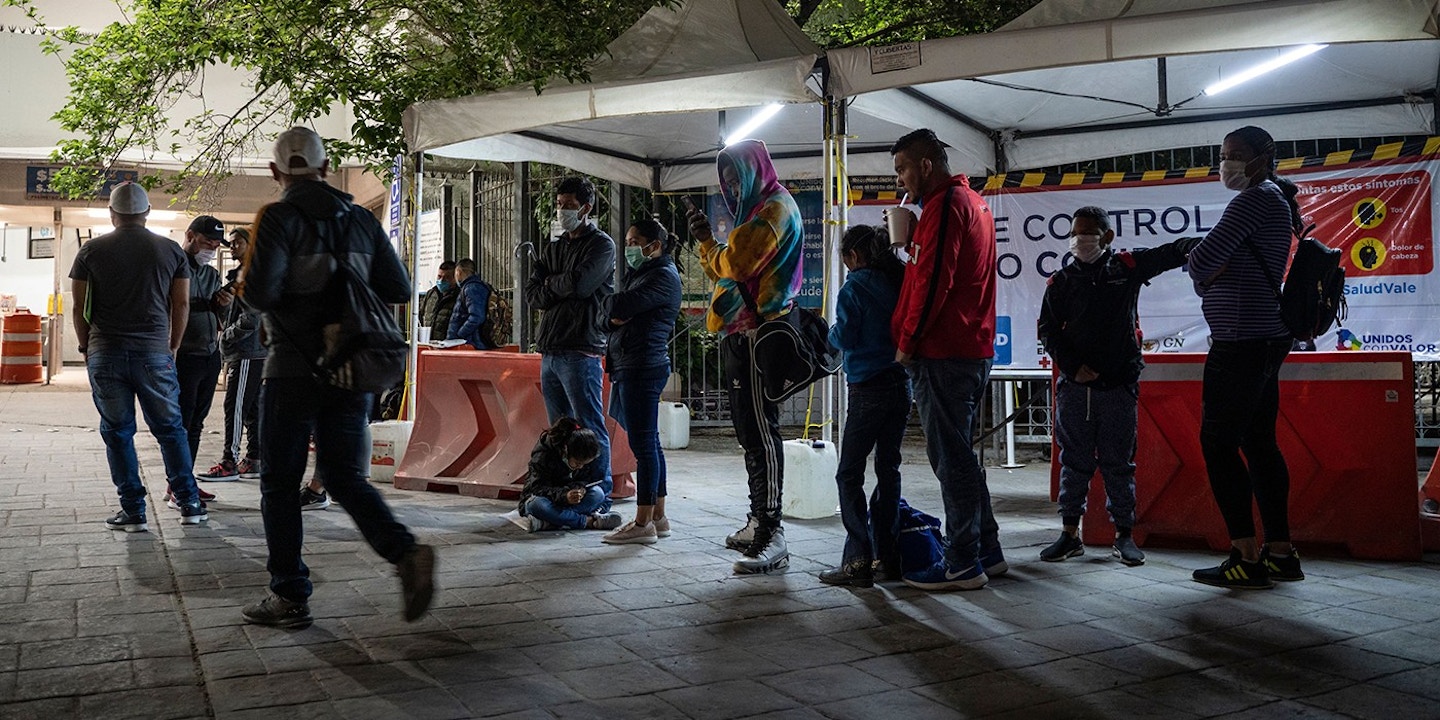 Abigail had been walking for hours in a rural stretch of Texas when she saw the lights of U.S. Border Patrol vans. She had planned to show the U.S. officials police reports of her extortion and burglary in El Salvador, papers she carried in a small pouch on her hip. But, they told her, because of a virus that had been spreading, there was no longer asylum. They sent her straight back to Mexico.

“This was not a game. I had enough proof, and I thought that I would be able to get across,” said Abigail, who is identified by a pseudonym for her protection. “When you face a serious risk, they usually go over your case.”

The coronavirus, which has infected over 4 million people, has also been the justification for historic immigration restrictions. In March, the U.S. government announced people who crossed the border unlawfully would immediately be sent back “to protect the public health.” Mexico, which eventually vowed to get all migrants out of its detention centers, suddenly had thousands more on its hands.

Since the U.S. began the expulsions, on March 21, it has sent over 20,000 migrants back, mainly to Mexico. About a third of them are Central Americans. The health of those migrants has been endangered for weeks, as they have been ping-ponged between detention centers, flown to countries they had fled, or bused to southern Mexican states with instructions to walk if they wished to get home. Mexico’s promise, which seemed like a blessing for migrants, for many became an ordeal.

“They’re taking advantage of the pandemic in order to cleanse the country of migrants,” said María Magdalena Silva Renteria, the director of a shelter, CAFEMIN, said of the Mexican government.

As the Trump administration has made it harder to obtain asylum in recent years, Mexico has operated in lock-step. It became a waiting ground when the U.S. restricted the number of daily asylum requests at ports of entry. Last year, it became a temporary residence, as the U.S. forced thousands of people to wait for court dates under the so-called Migrant Protection Protocols. The expulsion order, which seals the border to asylum-seekers and other undocumented migrants, is the most extreme measure the U.S. has foisted onto Mexico.

When Mexico began emptying its detention centers in late March, it appeared to be one of the few countries that heeded advocates’ warnings about the risk the virus posed for incarcerated people. In the span of a month, Mexico dropped the nearly 3,800 migrants in its custody to a previously unimaginable 106. For some that was still too slow: Migrants desperate for release set fires in their detention centers, leading to one death. And by then, Central American countries had already closed their borders, slowing deportations and leaving many in limbo.

It had taken Abigail, a middle-aged house cleaner who had never before left El Salvador, 22 days to reach Texas. It would take her another 21 to get all the way home. She would go through stays in two crowded Mexican detention centers, a 24-hour bus trip, and a plane ride with deportees who sometimes slipped off their face masks before getting back to El Salvador, where she would be forced into a month-long quarantine.

If any detainee had the coronavirus during the weeks she was locked in with them in Mexico, Abigail imagines there was no way to avoid getting it. She had spent her nights, at best, a pinky’s distance from other migrants. For a time, she slept head-to-toe with another woman on the same mattress, trying to avoid the stranger’s breath. Other detainees had fevers and colds.

Abigail thinks that if her phone had been on during her travels, instead of turned off to save data, she would have seen the news that the U.S. border had closed. “Sometimes, when you’re walking, you lose your sense of time,” she said. “It was only when were in the mountains, to be precise, that we turned on our phones, and on social media we saw how the virus had spread.”

Several hundred people who were detained in Mexico were transferred to local shelters or granted housing assistance, but the vast majority — including Abigail — were not. Now, alone in a quarantine center on El Salvador’s coast, she is unsure what’s next. “All of my life has been dangerous,” she said, “but now the situation is critical, because the illness is everywhere.”

What happened to the thousands of people expelled by the U.S. over the last seven weeks, if they were not kept in Mexican custody? To some, Mexico offered a binary choice: wait for Mexican asylum, or go home. To others, it handed out temporary visitors’ permits, often only after sending them to Mexico’s southern border, which many saw as an invitation to leave.

Never, in advocates’ experience, had so many migrants, fearing contagion or homelessness, sought so swiftly to go home. Many of the individuals Mexican officials did hold, either before or after they crossed the U.S. border, were unsure if they’d be let out, even if they asked for asylum. The national asylum office, while still accepting applications, has ceased most other functions.

“Can you imagine the stress of being locked up in the middle of a ton of people? I thought about it for a long time, and then I decided it’s better to ask for deportation,” said Francisco Sánchez Rojel, 19, a Honduran held in one of the centers where detainees set fire to their mattresses.

But as Central America temporarily barred deportations, not even those who wanted to fly home could. One document, issued to a Honduran migrant in Reynosa, along the Texas border, says that once a bus left her near the Guatemalan border, she should “continue her trip to her country of origin.” Never mind that Guatemala had no public transport, and that she didn’t have permission to enter the country. 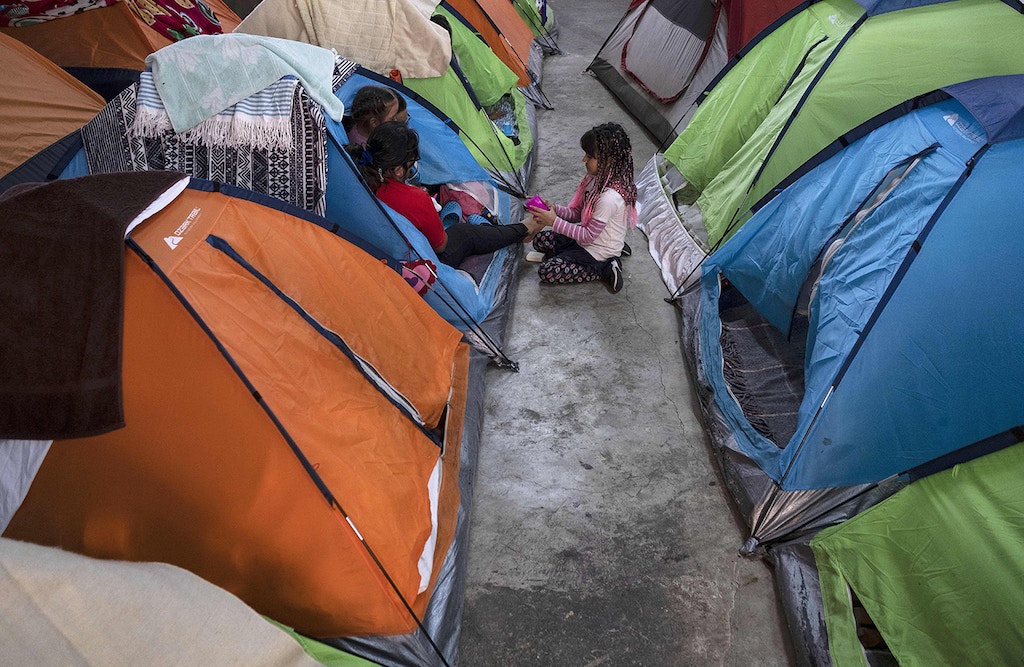 Members of an asylum-seeker family remain in a tent at the Juventud 2000 migrant shelter in Tijuana, Mexico, on April 3, 2020.

Advocates, who won a lawsuit demanding the release of at-risk migrants, struggled to find out where they went. Hundreds of migrants left in Mexico’s southernmost states were sighted walking. Some snuck through unofficial crossing points on foot, despite Guatemala’s refusal to accept them. Others begged for transport. They later popped up along on the Honduran border.

Harlin Antonio López, 22, a Honduran asylum seeker, said he was released from Mexican custody in February. He feared having nowhere to live during the pandemic. A shelter in Mexico City offered him a space, but the Mexican government did not approve his transfer. When he took a train north, he was caught, then bused with other migrants to Guatemala’s edge and left on the road.

“They let us off the bus five at a time, abandoning us,” he said. He was determined to stay in Mexico, but other people from the buses tried to cross into Guatemala. He said local Guatemalan residents threatened to beat them up, since they worried they carried the virus, and blocked their entry.

“We were like chickens in their cages in the plane. … We came as though we were not all living through a pandemic.”

People deported from the U.S. had already tested positive for coronavirus, and there were fears that people coming from Mexico could as well. Last week, the Guatemalan government reported that four minors deported from Mexico were infected, despite having no prior symptoms.

“Every day, we’ve got health personnel on the border to detect suspicious cases of Covid-19,” said Manuel Cardona Hernández, a public health official in the Guatemalan department of Petén. “But we’re a border region, in which you can cross over to Mexico by water or by river, and we have a ton of blind spots, where anybody can get through.”

Neighbors have heckled people coming home. Sánchez Rojel said that after he walked 18 hours from Honduras’s capital, after his deportation flight, he felt faint. Soldiers whom he asked for help made him wait days on the roadside for a coronavirus test. By luck, it was negative, but he understands why they — and his family — were suspicious.

“We were like chickens in their cages in the plane, and on the bus, too. We were on top of one another,” he said. “We came as though we were not all living through a pandemic.”

Mexico, in its announcement that it had emptied its detention centers, assured that the most vulnerable — children, families, the elderly, and people with chronic illnesses — were the first to be sent home. Advocates fear that people who are left in Mexico, bereft of earnings and remittances due to the virus’s economic impact, will become undocumented mid-pandemic, whenever their temporary documents expire in the next few months.

“We fought for people to be let out of the detention centers, because we thought that the risks inside were greater inside, but there have to be alternatives, so they do not end up homeless,” said Sergio Otal Aznar, the project coordinator for the Jesuit Refugee Service in Mexico. “In the markets and streets, we see a degree of misery far higher than before.”

“In the markets and streets, we see a degree of misery far higher than before.”

Mexico’s mercurial strategy left many migrants thousands of miles from where they intended to be during the pandemic. The country has far fewer coronavirus cases than the U.S., but many migrants say that does not necessarily make it safer. They are likely to have split futures: some, like López, will work for coins. Others, with more money, will refuse to stay.

The routes frequented by migrants are nearly empty now, just like Mexico’s detention centers. But 24-year-old Bryan, whose name has been changed due to fear of repercussion by U.S. authorities, said migrants like him can’t wait. He was deported to Honduras in March after living in the U.S. for twenty years. He headed north within days, was caught in Mexico and sent to two detention centers before being released. Last month, he crossed the border near Reynosa.

U.S authorities turned him back after finger-printing him. Three days later, he planned a second attempt. “The coronavirus does not scare me. I don’t know if it’s real, if it’s a lie. I haven’t seen anyone who has died of it,” he said. “My biggest concerns is my daughter and my mother. I want to get to them.”