A report by the DHS inspector general also shows that Jeff Sessions and Kirstjen Nielsen lied about prosecuting asylum-seekers at the border. 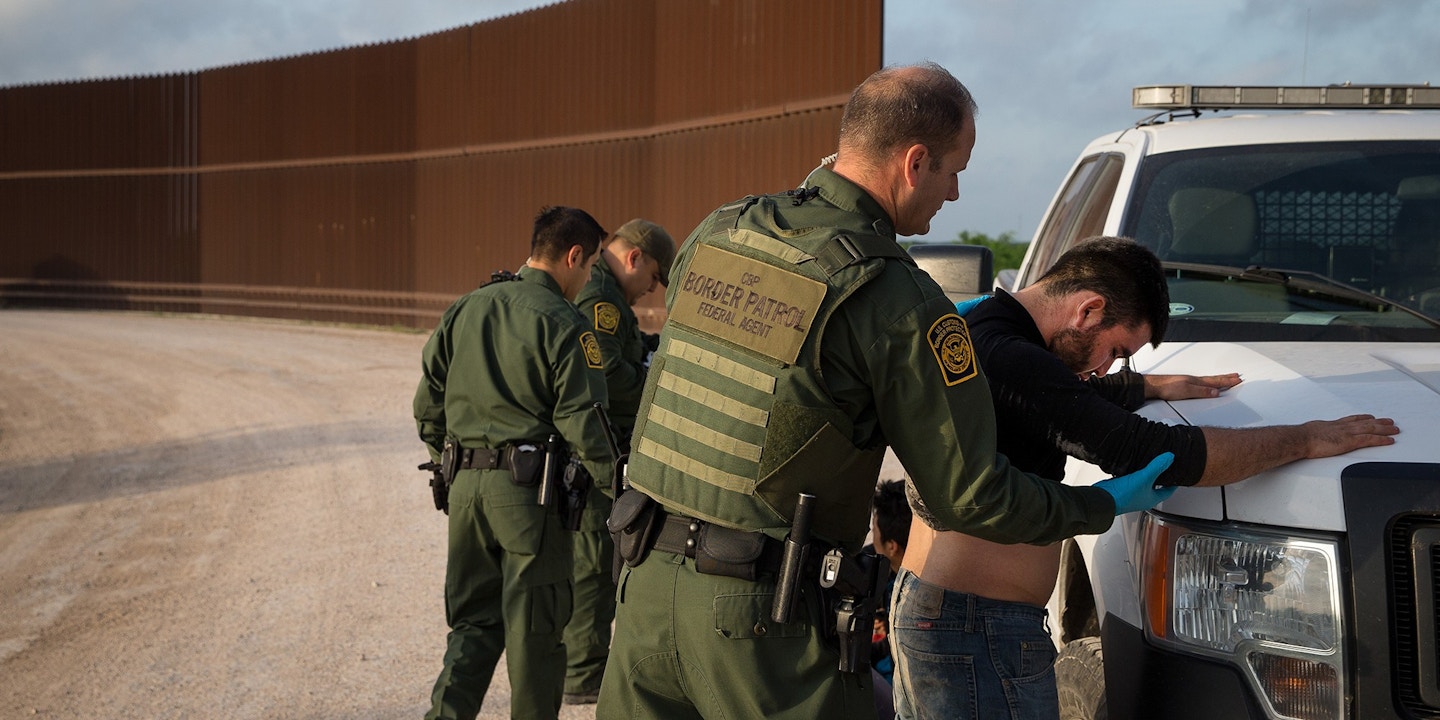 Appearing before a group of concerned faith leaders in mid-June, Attorney General Jeff Sessions offered words of reassurance. For weeks, the national media had focused its attention on Sessions’s “zero tolerance” initiative, a border enforcement strategy, which by that point had separated thousands of migrant children — including babies and toddlers — from their parents. “Please note, church friends, that if the adults go to one of our many ports of entry to claim asylum, they are not prosecuted and the family stays intact pending the legal process,” Sessions said.

Four days later, Department of Homeland Security Secretary Kirstjen Nielsen, offered more of the same at a White House press conference: “DHS is not separating families legitimately seeking asylum at ports of entry. If an adult enters at a port of entry and claims asylum, they will not face prosecution for illegal entry. They have not committed a crime by coming to the port of entry.”

Immigration attorneys and journalists on the border responded forcefully, arguing that the nation’s ports had become increasingly locked down with Donald Trump’s election, and that the problem had worsened with the onset of “zero tolerance.” Now, nearly four months later, a report from Nielsen’s own department indicates the advocates and reporters were right, and that the secretary and the attorney general were lying.

According to the Office of the Inspector General at DHS, “While the Zero Tolerance Policy was in effect, government officials — including the DHS Secretary and the Attorney General — publicly encouraged asylum seeking adults to enter the United States legally through a port of entry to avoid prosecution and separation from their accompanying children. However, at the same time, [Customs and Border Protection] was regulating the flow of asylum-seekers at ports of entry through ‘metering,’ a practice CBP has utilized at least as far back as 2016 to regulate the flow of individuals at ports of entry.”

“Although DHS asserts that the Zero Tolerance Policy and metering at ports of entry are distinct issues, a CBP official reported that the backlogs created by these competing directives likely resulted in additional illegal border crossings,” the report, published Tuesday, went on to say. It added that “OIG saw evidence that limiting the volume of asylum-seekers entering at ports of entry leads some aliens who would otherwise seek legal entry into the United States to cross the border illegally. According to one Border Patrol supervisor, the Border Patrol sees an increase in illegal entries when aliens are metered at ports of entry.” Attorney General Jeff Sessions addresses the media during a press conference at Border Field State Park in San Ysidro, Calif., on May 7, 2018.

In other words, while insisting that there would be no consequences for asylum-seekers who tried to enter the U.S. the “right” way, the administration was closing off that possibility and forcing people to cross illegally. One woman told the inspectors that she had been turned away three times “before deciding to take her chances on illegal entry.”

Eleanor Acer, of Human Rights First, said in an emailed statement that the OIG report “confirms that government officials launched an orchestrated policy of blocking asylum-seekers at official border points, despite the fact that U.S. laws allow them to seek protection.”

The practice of metering occurs when CBP officers working the ports take up positions on the pedestrian footbridges linking the U.S. and Mexico, stop prospective asylum-seekers mid-bridge, and radio back to the stateside processing center before allowing them to proceed. Ostensibly, metering is intended to prevent overcrowding, but following Trump’s election, advocates on the border reported a pattern of activity that suggested it was being used as a deterrent strategy.

Four days before Trump’s inauguration, the Washington Post published a detailed story reporting that “hundreds or perhaps thousands of foreigners” had been prevented “from reaching U.S. asylum officials along the border” in the preceding months. Those claims were repeated with greater detail, and in greater numbers, in news and human rights groups’ reports in the months that followed — and things appeared to get worse under “zero tolerance”. Asylum-seekers across the southern U.S. border said that they had been told by U.S. and Mexican border officials that there was no room, or were given incorrect or misleading information about who was eligible for asylum. The situation led to large lines and encampments at international footbridges and in the streets of some of Mexico’s most dangerous cities.

Melissa Crow, senior supervising attorney with Southern Poverty Law Center’s Immigrant Justice Project, said that “there has been an uptick in pushbacks since about April or May 2018, which was when zero tolerance took effect.”

Systematically turning away asylum-seekers at the border not only places those individuals at significant risk — at least 8,000 migrants have died attempting to cross the U.S.-Mexico border over the last decade and a half — it is also a violation of international law (one that manages to put money in the pockets of the same smuggling organizations that U.S. law enforcement routinely paints as a grave national security threat.) The legal services provider Al Otro Lado, which works in Tijuana, sued last year, accusing CBP of illegal turnbacks. In late August, a federal judge in California allowed the suit to move forward as a class action on behalf of asylum-seekers who say they were wrongfully refused entry.

Metering was one part of a broader set of problems created by the “zero tolerance” regime observed by the OIG team. Under “zero tolerance,” anyone apprehended between ports was to be charged with a crime for illegal entry, regardless of whether they had previously attempted to make an asylum claim legally or if they were traveling with a child. As immigration enforcement heads spelled out in a policy memo in April, family separation was the predictable consequence of this: Because children could not be held in criminal custody, when the parents were referred for prosecution, they’d be taken away. By requiring the criminal prosecution of mothers and fathers, the architects of “zero tolerance” created a scenario in which children who crossed the border with their parents were turned unaccompanied by the state. A 14-year-old boy from Honduras sleeps on the Mexican side of the Brownsville Matamoros International Bridge, where he and his family had been waiting for days after being denied entry into the U.S., in Brownsville, Texas, on June 28, 2018.

Unaccompanied migrant children — historically, mostly kids who crossed the border alone — have traditionally been turned over to the Office of Refugee Resettlement, within the Department of Health and Human Services. Law and policy had long required that CBP not hold children for more than 72 hours. CBP’s facilities are not equipped for long-term detention, and for years they have been at the center of reports of violence and abuse against migrant children. But under the new orders, the OIG found the prohibition against detention of children with CBP for more than 72 hours was routinely violated. In the Rio Grande Valley of Texas, the epicenter of the family separation crisis, where hundreds of kids were kept in a cage-filled warehouse known as the “dog kennel,” at least 564 children — “44 percent of children detained during this time” — were detained for more than 72 hours. “This sector also held a child for 25 days, nearly three times longer than any other Southwest Border Patrol sector,” the OIG report found.

The report also singled out the ways in which CBP was unprepared to keep track of suddenly solo children who had been taken from their parents — despite the fact that high-level officials had acknowledged that this would be the impact of “zero tolerance.” Various government agencies’ systems weren’t coordinated, information had to be entered manually and emailed around, and despite a public statement from DHS in June that there was a “central database” of the families who’d been separated, the OIG found no evidence that such a thing existed. The Border Patrol also had no systematic way of making sure that preverbal children could be identified, such as wrist bracelets or photographs, the report said.

The OIG report takes no position on the wisdom or efficacy of “zero tolerance.” But the report at various points exposes a deep indifference among authorities toward the migrant families on whom this policy would have such a drastic impact. It describes Border Patrol officers complaining to inspectors about having to watch children, when they’d rather have been out “patrolling and securing the border.” (Despite vocal enthusiasm from Border Patrol for ending so-called catch-and-release practices, in which migrants weren’t prosecuted automatically.) And in McAllen, Texas, bureaucratic laziness led to families being unnecessarily separated. If a migrant prosecuted under “zero tolerance” was speedily sentenced to time served, CBP officers in McAllen said that they could cancel the children’s transfer to HHS and reunite the families. But this was overruled, according to a senior official, “to avoid doing the additional paperwork required.”

Top photo: Border Patrol agents apprehend migrants shortly after they crossed the border from Mexico into the United States in the Rio Grande Valley Sector near McAllen, Texas, on March 26, 2018.