Press coverage of the Flynn case shows that the media has failed yet again to grasp the larger narrative of Donald Trump’s presidency. 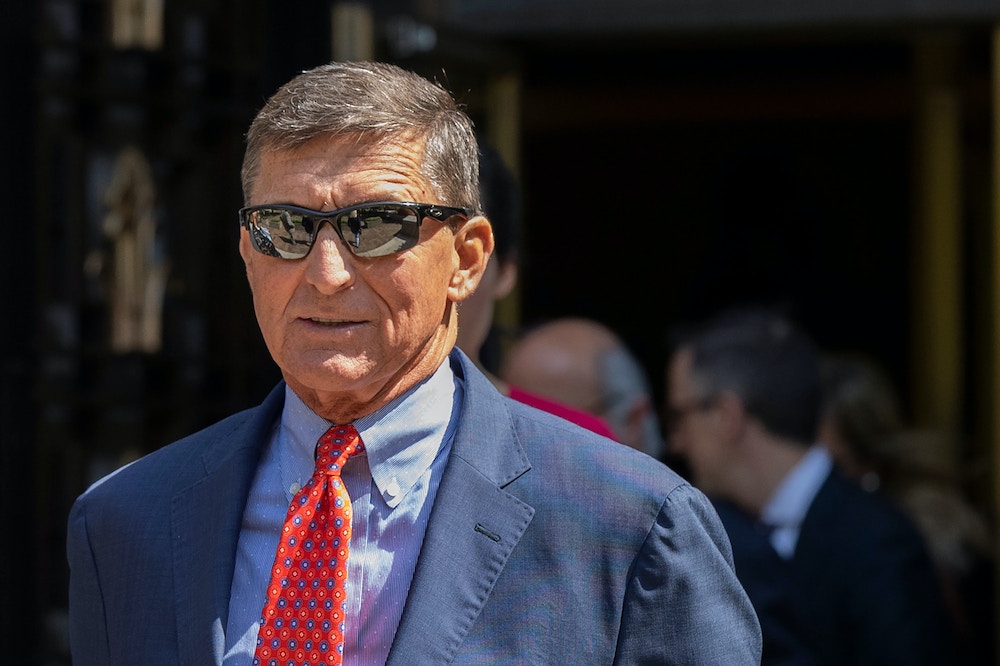 One of the biggest challenges for journalists writing about Donald Trump is that there have been too many scandals.

That sounds counterintuitive, because reporters love covering scandals and controversies, and Trump constantly manufactures both. But the one thing the press loves more than a scandal is a simple, straightforward narrative. Reporters are always on the hunt for a through-line when they write about a prominent figure, a common thread that ties a series of stories together and thus, helps explain the controversy engulfing a politician or a celebrity.

Hillary Clinton had an email problem. It was a simple, single narrative that reporters and pundits covering her presidential campaign in 2016 could revisit over and over to explore what they perceived as her character flaws: arrogance, condescension, and her apparent belief that the rules didn’t apply to her.

The press generally covers each Trump scandal incrementally, with little context. Without a narrative to follow, the initial shock over each scandal quickly dissipates.

By contrast, Trump has a new scandal almost every day. Chaos, corruption and criminality reign in Trump’s White House. There are so many scandals that it is difficult for journalists to make sense of them all.

What is the narrative that ties all of Trump’s scandals together? It is that Trump is a would-be autocrat.

But the White House press corps is reluctant to use such plain language to describe Trump. That hesitance has led to the greatest journalistic failure of the last four years: The American media has never found the Trump narrative.

Instead, the press generally covers each Trump scandal incrementally, with little context. Trump coverage thus seems jumbled and frenzied; without a narrative to follow, the initial shock over each scandal quickly dissipates. Individual scandals soon turn into background noise as reporters move on and obsess over the president’s latest tweets.

The action sent shockwaves through the national security and legal communities, where the move was seen for what it was: an unprecedented and raw abuse of power by Barr designed to appease Trump and protect a Trump acolyte who had lied to the FBI about his calls with the Russian ambassador. Barr dropped the case against Flynn despite the fact that Flynn had twice pleaded guilty.

Barr’s action in the Flynn case followed a similar move in February to protect Trump’s infamous friend Roger Stone, who was convicted in 2019 of lying to Congress and threatening a witness in another case related to the Trump-Russia scandal. Barr forced the prosecutors in the case to reduce their sentencing recommendation to make sure that Stone wouldn’t spend much time in prison.

Both moves are part of Barr’s Soviet-style effort to erase history and reverse the outcome of the Trump-Russia investigation led by special counsel Robert Mueller. Line prosecutors withdrew from the Flynn and Stone cases as a result of Barr’s actions, a highly unusual act that signals how outrageous the attorney general’s interference was.

Justice Department officials involved in both the Flynn and Stone cases quickly and publicly condemned Barr’s latest move. Mary McCord, who was acting assistant attorney general for national security from 2016 to 2017, charged that Barr and his Justice Department misconstrued her words in order to help falsely discredit the Flynn investigation and drop the case. “The account of my interview in 2017 doesn’t help the department support this conclusion, and it is disingenuous of the department to twist my words to suggest that it does,” McCord wrote in a New York Times op-ed on Sunday.

Barr dropped the case against Flynn despite the fact that Flynn had twice pleaded guilty.

Jonathan Kravis, a former prosecutor in the Stone case, wrote in the Washington Post on Monday about his decision to resign from the Justice Department three months ago in protest. “At the time, I thought that the handling of the Stone case, with senior officials intervening to recommend a lower sentence for a longtime ally of President Trump, was a disastrous mistake that the department would not make again. I was wrong. Last week, the department again put political patronage ahead of its commitment to the rule of law, filing a motion to dismiss the case against former national security advisor Michael Flynn – notwithstanding Flynn’s sworn guilty plea and a ruling by the court that the plea was sound.”

More than 1,900 former Justice Department employees have repeated their earlier calls for Barr’s resignation, saying that he had “once again assaulted the rule of law” in the Flynn case.

Barr first started trying to reverse the outcome of the Trump-Russia investigation as soon as he became attorney general in 2019. Before Mueller’s report was made public, Barr gave a wildly misleading summary of its findings that spun it to try to make Trump look good.

Barr’s obfuscation was so bad that earlier this year, a federal judge handling a Freedom of Information Act lawsuit seeking the public release of the complete Mueller report said that Barr lacked credibility on Mueller’s findings; since he didn’t trust Barr, the judge ruled that the Justice Department would have to show him the redacted portions of the report so he could decide what should remain out of the public domain. Judge Reggie Walton wrote that Barr had “made a calculated attempt to influence public discourse about the Mueller Report in favor of President Trump despite certain findings in the redacted version of the Mueller Report to the contrary.”

After he moved to drop the Flynn case, Barr’s blatant abuse of power was swiftly and widely condemned by leading legal scholars, law enforcement professionals, and Democratic leaders. “This move embeds into official U.S. policy an extremist view of law enforcement as the enemy of the American people,” wrote two Georgetown University law professors, Neal K. Katyal and Joshua A. Geltzer, in a Times op-ed.

“Flynn pled guilty to lying to the FBI about his illicit Russian contacts,” tweeted Rep. Adam Schiff, a California Democrat and chair of the House Intelligence Committee. “His lies do not now become truths. This dismissal does not exonerate him. But it does incriminate Bill Barr. In the worst politicization of the Justice Department in its history.” Sen. Elizabeth Warren, a Massachusetts Democrat and former presidential candidate, called on Barr to resign, tweeting: “We need an Attorney General whose loyalty is to the Constitution, not the president.”

Barr’s action was so radical that it prompted harsh criticism from former President Barack Obama, who has generally limited his attacks on Trump and his administration.

“There is no precedent that anybody can find for someone who has been charged with perjury just getting off scot-free,” Obama said Friday night during a call with the Obama Alumni Association. “That’s the kind of stuff where you begin to get worried that basic — not just institutional norms — but our basic understanding of rule of law is at risk. And when you start moving in those directions, it can accelerate pretty quickly as we’ve seen in other places.”

Trump named Christopher Wray as FBI director after firing his predecessor, James Comey, but in recent days Trump has threatened to fire Wray because Wray has so far failed to get fully on board with the ongoing purge of the Justice Department and the FBI. The FBI’s official statement about the Flynn case, however, suggests that Wray has gone to a Trump reeducation camp for officials who have failed to show sufficient fealty.

The bureau “remains firmly committed to addressing the failures under prior FBI leadership while maintaining the foundational principles of rigor, objectivity, accountability, and ownership in fulfilling the Bureau’s mission to protect the American people and defend the Constitution,” the statement said.

In another ongoing part of his effort to discredit the Trump-Russia investigation, Barr has launched an investigation into the Mueller investigation, run by a prosecutor of his own choosing, John Durham. Durham is best known for being tasked by the Obama Justice Department to investigate the Bush administration’s post-9/11 torture program. It was obvious at the time that the Obama administration opened that investigation only reluctantly and under intense public pressure. Obama had said that he wanted to “look forward, not back,” and the White House had made it quite clear that it did not want to prosecute Bush-era officials. Durham obviously understood what the White House wanted; he didn’t bring charges against any former government officials.

Durham’s findings may now be delayed by the pandemic, and so quite conveniently could emerge just before the November election, their release orchestrated by Barr for maximum political effect.

Certainly, Durham once again knows what the White House wants from him: heads on the chopping block. With his track record of docile obedience, Durham could well deliver.

Durham’s findings, which were supposed to come out in May or June, may now be delayed by the pandemic, and so quite conveniently could emerge just before the November election, their release orchestrated by Barr for maximum political effect.

This ongoing erasure of the Mueller investigation, accompanied by a purge of the Justice Department, the FBI, and probably the CIA, is almost certainly just the start of what will be the complete perversion of the rule of law in the United States if Trump is reelected. If that happens, Trump and his friends will feel free to openly commit crimes without fear of consequences. With Barr at the Justice Department, the United States will be reduced to an autocracy, rife with self-dealing, corruption, and legal immunity for Trump lackeys. Meanwhile, Trump and Barr will crack down on political dissent with the full force of a deeply compromised Justice Department and FBI.

There was some good press coverage of Barr’s action in the Flynn case, particularly in the Times. But overall, the media gave the Flynn story the typical one-day treatment, characterizing it as yet another individual scandal in the wild ride that is the Trump administration.

The press is desperate to cover Trump the way they have always covered presidents. But if they were willing to view the Flynn case as part of a larger narrative, their stories would say that Trump and Barr pose existential threats to the rule of the law.