Biden Taps AOC and Jayapal to Help Shape Party Policy. Isn’t This a Win for Progressives?

Kudos to Bernie Sanders for suggesting progressive and outside-the-Beltway names — and kudos to Biden and his team for accepting them. 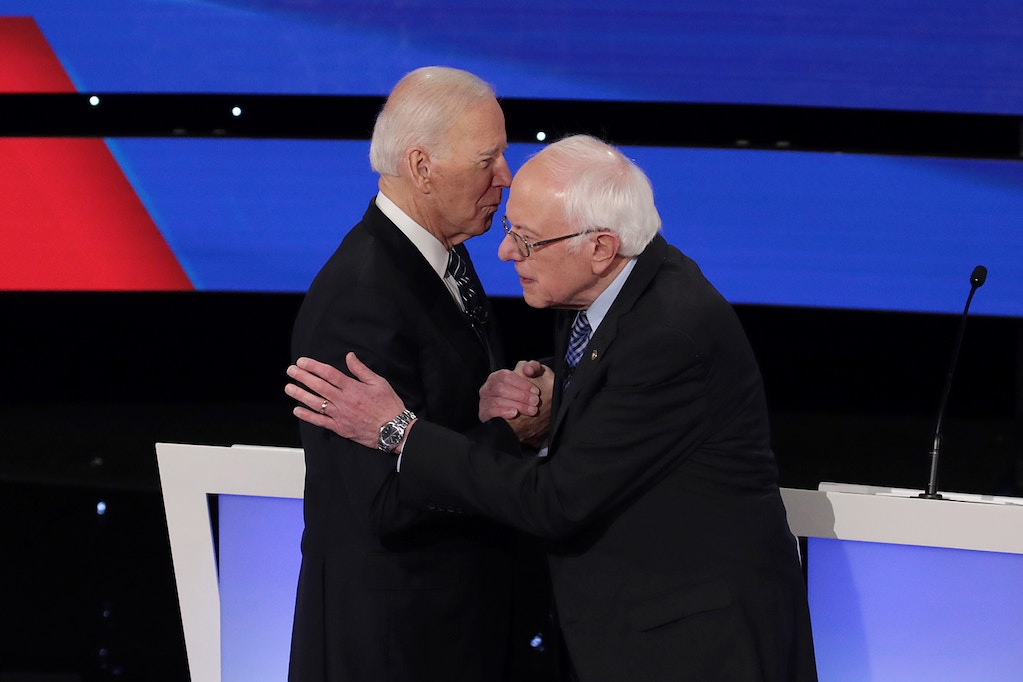 If you were to draw up a list of the most plain-spoken, passionate, and progressive women in American public life, you would have to include Rep. Alexandria Ocasio-Cortez, Rep. Pramila Jayapal, and Sara Nelson somewhere near the top. All of them, of course, were loud and ardent advocates for Bernie Sanders during the Democratic presidential primaries.

Imagine my surprise then — or was it disbelief? — to discover on Wednesday morning that they had been appointed as co-chairs of three of the six “joint task forces” that are meant to unify the Democratic Party on policy in the run-up to November.

NEW this morning: Biden and Sanders roll out the members of the 6 Unity Task Forces that will offer recommendations to the DNC platform cmte and to Biden. Includes @johnkerry, @EricHolder, @vivek_murthy, @aoc, @RepJayapal, @rweingarten, @econjared, @StephanieKelton. pic.twitter.com/fGHHFJcUVE

To be clear: These three co-chairs will be representing Sanders and his vision for the party. It was the Vermont senator who recommended them for these positions, and pushed to have them included. Remarkably, though, it was Joe Biden, Mr. Status Quo himself, who signed off on them.

“We’ve set up joint committees together to deal with how we would deal with everything from the virus all the way down to education, the criminal justice system, the new green deal, etc.,” the former vice-president told a Las Vegas TV news outlet. “I’m working with Bernie and his people and, so, we’ve made some changes and listened to Bernie supporters. And for example, we have, you know, Congresswoman Ocasio-Cortez. She is on one of the panels as well.”

This is all, to borrow an old line of Biden’s, “a big fucking deal.” It isn’t only the impressive trio of AOC, Jayapal, and Nelson who feature on these panels. Also on the health care task force is Abdul El-Sayed, who ran an insurgent campaign for the Democratic gubernatorial nomination in Michigan and is the co-author of a book on Medicare for All. Also on the economy task force is Stephanie Kelton, a pioneer of Modern Monetary Theory and author of a forthcoming book on deficit hysteria. Also on the climate change task force is Varshini Prakash, executive director and co-founder of the Sunrise Movement — the progressive group behind the Green New Deal that gave Biden’s presidential climate plan an “F” rating in 2019. Meanwhile, Heather Gautney, an activist-scholar and top Sanders adviser, is co-chair of the education task force.

Kudos to Sanders for suggesting such outside-the-Beltway names but — and some on the left might not want to hear me say this — kudos also to Biden and his team for accepting them.

Above all else, kudos to grassroots organizations and activists on the left who demanded the presumptive Democratic nominee reach out to them. “Biden’s announcement demonstrates the progressive movement’s growing power as a key constituency within the party,” Waleed Shahid, of Justice Democrats, told me. “As the Democratic nominees, Bill Clinton, Gore, Kerry, Obama, and Hillary Clinton did not make a major effort to appoint progressives.”

Yet Biden has. And his own appointments to the six committees aren’t all bad, either. Rep. Karen Bass, who has one of the most liberal voting records in the House, is his choice for co-chair of the economy task force, while neoliberal ideologues like Larry Summers and Erskine Bowles are, thankfully, nowhere to be seen. AOC’s fellow co-chair is former Secretary of State John Kerry, who signed the Paris climate accords on behalf of the United States.

If personnel is policy, as the old saying goes, then this should be seen as a clear victory for progressives. These six committees, according to the Biden campaign, “will meet in advance of the Democratic National Convention to make recommendations to the DNC Platform Committee” and to Biden directly. The task forces, the former vice president has said, “will be essential to identifying ways to build on our progress and not simply turn the clock back to a time before Donald Trump, but transform our country.”

If personnel is policy, as the old saying goes, then this should be seen as a clear victory for progressives.

This, incidentally, is a welcome change in tone and rhetoric from the Biden of 2019, who pledged to a group of wealthy donors that “nothing would fundamentally change.” A source close to Sanders tells me the current pandemic has had a major impact on Team Biden: “They realized they messed it up last time, when it came to the Great Recession. This is the time when ideas matter most.” The former vice president himself conceded to an audience on Zoom a few weeks ago: “The blinders have been taken off because of this Covid crisis.”

Cynics on the left might see this new language, and these new appointments, as merely progressive window-dressing what will be a business-as-usual presidency. I can’t honestly blame them. Biden is an untrustworthy figure. He is obsessed with cutting deals with Republicans. And he has a long history of doing the bidding of corporate interests — from Big Finance to Big Pharma to Big Oil.

But he is also, to quote Noam Chomsky, an “empty vessel.” “With a Biden presidency, the activism of a popular movement will make a big difference,” Chomsky told me last month. “Trump’s probably immune, but Biden will be open to it.”

So far, he seems to be. Those progressives who agreed to join these joint task forces may have made a similar calculation. In a Twitter thread, Sunrise Movement’s Prakash said “the decision wasn’t easy to make. It’s no secret that Biden wasn’t the favorite candidate of our movement or of young ppl broadly.” Nevertheless, she wrote, “I feel a responsibility to win whatever we can from this platform.” El-Sayed borrowed an analogy from football to explain his own reasoning: “Drive for the touchdown–but a field goal is still 3 pts on the board.”

Still, the cynics may be proven right. Perhaps Biden will ignore the recommendations from these task forces. Or perhaps he’ll embrace them — and then ignore them once he’s sworn in.

But I’m not so sure. Why would he appoint former presidential candidate John Kerry — doyen of the Democratic Party establishment and a close personal friend of his — as a task force co-chair, only to ignore Kerry’s recommendations? And why would he take the risk of including progressive firebrands such as Ocasio-Cortez and Nelson, who could quit and denounce him at any time? “He’d be playing with fire” if he ignores them, a top ally of Bernie Sanders tells me. “You think AOC’s not gonna burn you?”

Still, there is no room for complacency. The grassroots left must keep up the pressure on the Biden campaign — and keep up its demands. Membership on these joint task forces is nowhere near enough. How about — as even former Obama staffers Jon Favreau and Dan Pfeiffer have suggested — calling for a prominent Sanders-aligned progressive (Rep. Ro Khanna?) to be made a co-chair of the Biden campaign? Why not also insist on the appointment of a senior member of the Sanders camp to any presidential transition team? And, above all else: Why not push for Sen. Elizabeth Warren as VP?

Remember: Personnel is policy. Those who have agreed to work with Biden and company are not stooges or sellouts. The outsiders haven’t morphed into insiders. Believe it or not, there is an actual strategy here. Ocasio-Cortez summed it up in a tweet defending her decision to co-chair the climate change task force: “Inside pressure. Outside organizing.”