New polling conducted by Data for Progress for the Democratic Policy Center reveals there is little public appetite for prioritizing the lobbyist bailout. 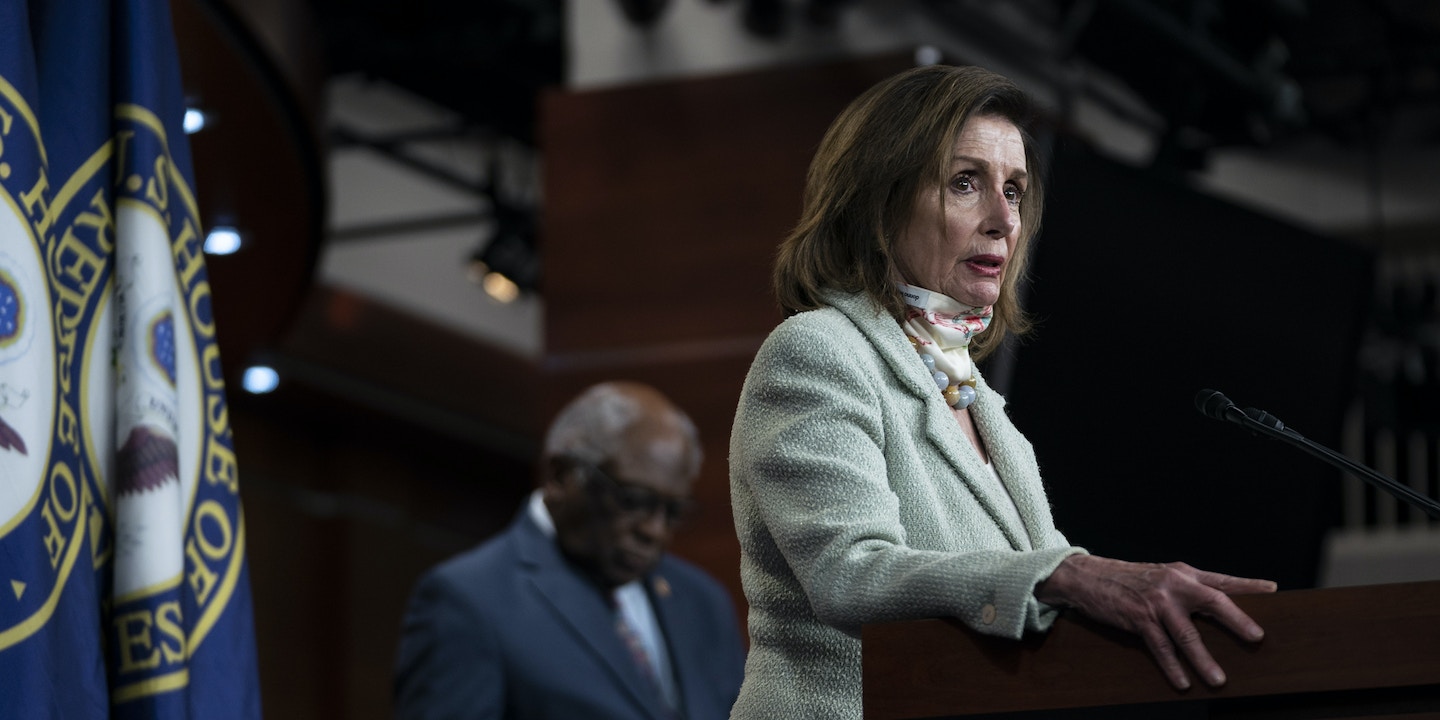 Lawmakers may soon find that Americans, it turns out, aren’t terribly excited about bailing out Beltway oil and bank lobbyists.

Last month, House Democrats passed the HEROES Act, the slow-moving next phase of the coronavirus economic relief efforts to provide sweeping consumer protections and funds to extend unemployment benefits, shore up local governments, and to provide extra pay for frontline workers, along with an additional $1,200 stimulus check for individuals. It includes a provision, pushed by House Speaker Nancy Pelosi, that extends small business bailout funds to corporate lobbyists and other political advocacy groups.

But the bill, which awaits Senate action, may fuel political blowback. New polling conducted by Data for Progress for the Democratic Policy Center reveals there is little public appetite for the advocacy fund sections of the bill.

The survey, released on Tuesday, shows 48 percent of Americans strongly or somewhat strongly oppose any legislative effort to reward corporate lobbying groups with coronavirus stimulus money, versus 34 percent who support the measure.

The poll also asked respondents what types of stimulus efforts should be prioritized, with 70 percent of Americans expressing opposition to making lobby groups a major focus on economic relief. The survey suggests opposition to the provision cuts across independents, Democrats, and Republican voters.

“The growing momentum in Congress to bail out virtually all corporate lobbying groups has been absurdly justified on the grounds that local chambers of commerce need assistance,” said Adam Eichen, campaign manager for the Democratic Policy Center.

The HEROES bill revises the Paycheck Protection Program, the fund that provides up to $10 million in forgivable loans to small businesses, so that 501(c)(6) trade associations and other 501(c)(4) political advocacy groups may apply for the money. Originally, the program only extended to certain 501(c)(3) charitable and non-profit organizations. (Some Democratic lawmakers pushed to include 501(c)(5) labor unions as part of the expansion of the PPP program, but were rebuffed. The House version of the bill does not include labor union support.)

As The Intercept first reported, the professional advocacy industry has leveraged its relationships with lawmakers to obtain access to bailout funds. The American Society of Association Executives, which represents trade group leadership, mobilized over 100 nonprofit advocacy groups to pressure Congress to shift the criteria for the program.

The Senate, which is expected to take up the legislation in coming weeks, has not yet provided clarity on where it stands on the lobbyist money. Sen. Ted Cruz, R-Tex., according to The Hill, has drafted his own effort that mirrors House Democrats’ bill to extend PPP money to trade associations.

Several others, including Democratic Virginia Sens. Mark Warner and Tim Kaine, have issued statements in support, arguing that expanding the PPP program trade groups serve as “valuable partners in helping small business owners get up-to-date information about the assistance programs under the CARES ACT” and that “law enforcement associations here in Virginia” would benefit from money that could be spent on training.

Few lawmakers have explicitly called for bailout funds to lobbyists, often cloaking the program as a broad effort designed to support a range of local nonprofits. Though touted as a boon to local chambers of commerce, the shift is likely to benefit representatives of the most powerful corporations in America. The largest influence peddlers are organized as 501(c)(6) trade groups, including the Pharmaceutical Research and Manufacturers of America, which represents the world’s largest drugmakers, and Airlines for America, which represents the airline industry.

A manager’s amendment to the HEROES Act has attempted to clarify that the PPP expansion should not go to federally registered lobbyists. That prohibition may have limited impact since many trade association lobbyists do not register under the federal system.

In addition, federal courts have since ruled against the restrictions on lobbying as a violation of the First Amendment. The initial PPP fund, passed in March as part of the CARES Act, contained restrictions on funds spent on explicit lobbying efforts as part of broad guidelines set by the Small Business Administration, which administers the fund.

Last month, the Sixth Circuit Court of Appeals overturned restrictions on PPP money based on a range of criteria, including strip clubs and lobbying firms, by taking an expansive interpretation of the CARES Act as intended to support “any business concern.” But the court declined to issue a national injunction, only applying its ruling to the plaintiffs and intervenors in the case, which originated in Michigan.

The Democrats’ HEROES Act still includes many provisions that enjoy broad levels of public support, according to the poll, which also asked respondents a series of questions about other forms of economic stimulus. The survey found strong or somewhat support providing relief funds to families and individuals at 89 percent, small businesses at 87 percent, and cities and states at 82 percent.

The legislation establishes a $200 billion fund “Heroes Fund” to provide a $13-an-hour hazard pay raise to essential workers. Families earning up to $150,000 in household income would be eligible for up to $6,000 in a new round of direct stimulus checks. The fund extends additional unemployment benefits to ensure laid off workers, including gig workers, would continue to receive as much as $600 a week. And the $2 trillion also provides a range of student loan relief, mortgage and rental relief, and an influx of funding to help state governments.

“This polling shows that Americans oppose the efforts in Congress to let corporate lobbying groups benefit from coronavirus relief funding, even if the measures would help local chambers, too,” said Eichen. “If members of Congress want to do something that the American people support, they should prioritize offering more direct funding to individuals and families, which is overwhelmingly popular.”