With His Latest Lunacy, Trump Has Moved Into Nixon Territory — and Perhaps Beyond

Trump’s berserk claim about Martin Gugino, a protester shoved to the ground by police, recalls Nixon’s musings about a horrific photo from the Vietnam War. 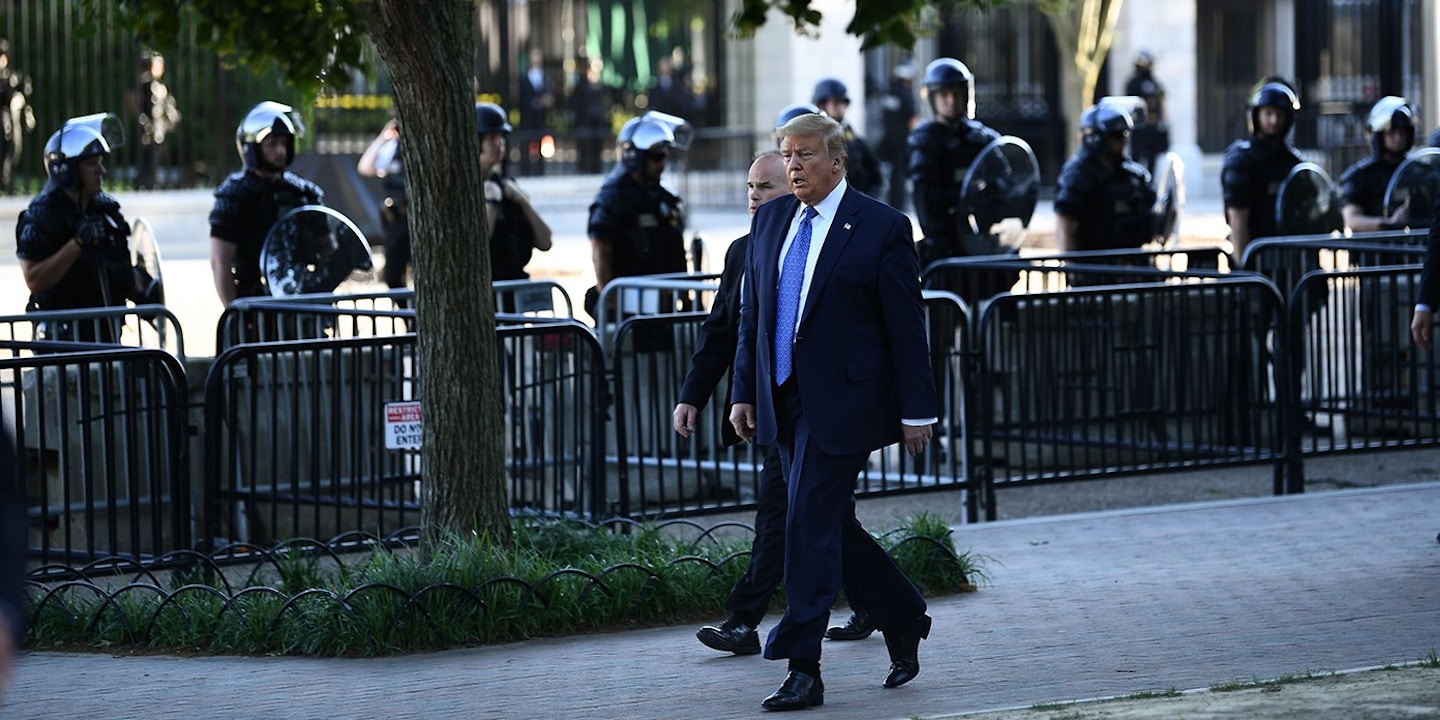 It’s tough to determine the most bizarre thing President Donald Trump has ever said. But what he tweeted on Tuesday morning is definitely in the running:

Buffalo protester shoved by Police could be an ANTIFA provocateur. 75 year old Martin Gugino was pushed away after appearing to scan police communications in order to black out the equipment. @OANN I watched, he fell harder than was pushed. Was aiming scanner. Could be a set up?

This appears to be based on a segment on One America News Network, the cable channel for people who find Fox News unbearably liberal. The segment is narrated by OANN reporter Kristian Rouz, a Russian who speaks in a delightful, heavy accent; Martin Gugino, he says, was “show-vd” by the police.

Rouz goes on to declare that Gugino “has been referred to as an agitator” and “now reports say police departments across the nations must not repeat the mistakes of the Buffalo PD, falling for far-left tricks.”

Here's the first half of the batshit OANN segment Trump just tweeted. It alleges the 75 year old man assaulted by Buffalo police officers was an antifa operative, based on a report from Conservative Treehouse. pic.twitter.com/CeMVyJcoh8

It’s tempting to dive into the details to demonstrate that the president of the United States was wrong to claim the sky is green. But it may be more useful to ask what this says about Trump’s current psychological state, and how it compares to other Americans who’ve wielded the power of life and death.

On June 8, 1972, South Vietnamese troops dropped napalm on the village of Trang Bang. As Phan Thi Kim Phuc, a 9-year-old girl, fled naked down a road — her clothes had been burned off by the 2,000-degree jellied gasoline — an Associated Press photographer took a picture. The photograph went around the world, and immediately became a symbol of the war’s berserk cruelty.

Four days later, on June 12, President Richard Nixon mused about the picture in a conversation captured by his Oval Office taping system. “I wonder if that was a fix,” he said to his chief of staff H.R. Haldeman. “Could have been,” Haldeman replied. “Because they got that picture of the little girl without any clothes … Napalm bothers people.”

What we see here is the people at the summit of power as they actually are — not supervillains delighting in their barbarism, but regular human beings who, like many, can’t bear to face the reality of what they do to others. So the immediate instinct of Nixon was to escape into a fantasy world.

William Westmoreland, a general who’d served as the U.S. commander in Vietnam, displayed the same predilection for psychological self-preservation. In a 1986 speech to Florida businesspeople, he learnedly explained that “an investigation determined that Kim Phuc had been burned in an accident involving a hibachi.” No such investigation ever occurred.

It wasn’t just Vietnam, of course. In 2011, U.S. Apache gunships staged an attack in Afghanistan’s Ghaziabad District. The administration of Hamid Karzai, then the Afghan president, received reports that 50 civilians had been killed, including numerous women and children, and many children had survived with burns. In a meeting with Afghan officials, David Petraeus, the U.S. commander in Afghanistan, shocked them by suggesting that the children had been burned by their own parents, in order to pressure the U.S. and its allies to cease operations in the area.

And this behavior is obviously not unique to American officials. During Saddam Hussein’s interrogation by the FBI, he was repeatedly shown evidence of his brutal actions. He generally did not attempt to justify what he’d done; instead, he simply refused to accept that he’d done it. “Stories and tales have been woven” about Iraq’s treatment of Kuwaiti prisoners of wars after the 1991 Gulf War, he said. When the FBI screened a documentary about his suppression of the post-Gulf War insurrection, he declared it to be a “propaganda film.”

But the connection leaders have to reality can wax and wane. According to Haldeman’s diaries, Nixon called him on Easter in 1973 to commiserate about the metastasizing Watergate scandal. “Just remember you’re doing the right thing,” Nixon told him. “That’s what I used to think when I killed some innocent children in Hanoi.” In other words, at this point Nixon was not telling himself fairy tales about his enemies hurting children to make him look bad. Instead, he took the more psychological healthy route of believing that he was responsible for mass murder, but that it was necessary.

Kim Phuc suffered grievous third-degree burns across her body. When the AP photographer took her to a Saigon hospital, doctors did not expect her to survive. She did live, however — and it appears that Martin Gugino will. Like Gugino, she has spent her life as a peace activist. So it’s no surprise that Trump is desperately grasping for any explanation that his “side” does not casually hurt people like this. As the poet T.S. Eliot said, “human kind cannot bear very much reality.” Those who run the world can bear the least.