Street justice administered by people who don’t want anyone to know who they are is not a substitute for policing. 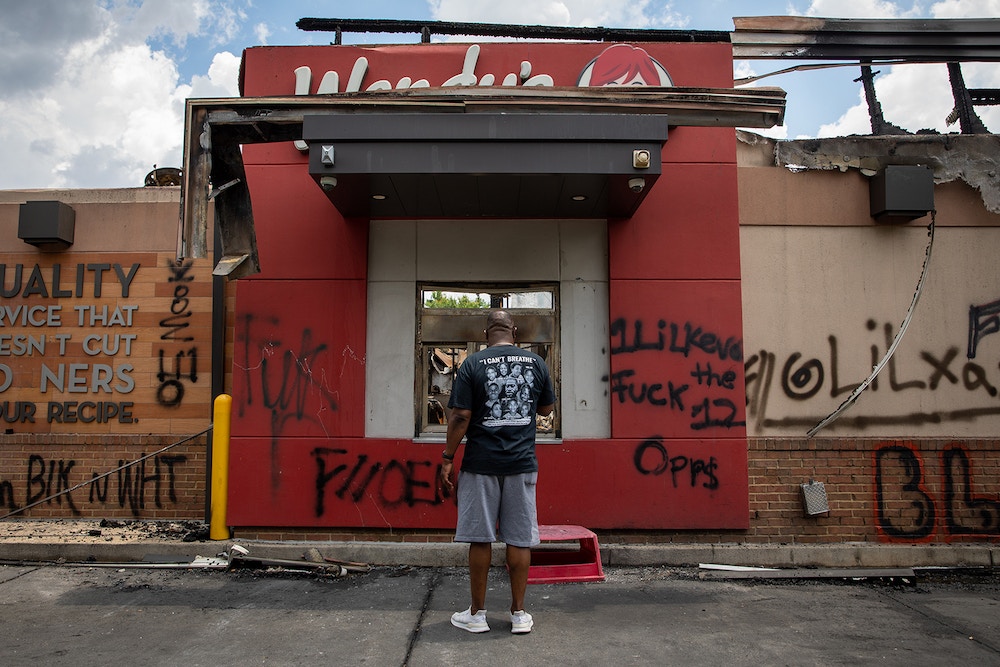 A man stands in front of the Wendy’s restaurant set ablaze overnight on June 14, 2020, in Atlanta.

On Saturday night, barricades blocked the street on one side of the charred ruins of the Wendy’s drive-thru where an Atlanta police officer killed Rayshard Brooks a week ago, on June 12. Cars cordoned off the other side. There, a Black man with an AR-15 was standing guard, stopping white people from entering the site.

What began last week as a vigil for Brooks had transformed into something more militant. Amid the selfie-taking teenagers and people hawking Black Lives Matter T-shirts at the crowded convenience store nearby, a band of armed young Black men milled about. They bore pistols and long guns, with gaudy accessories redolent of modern militia equipage: an extended pistol magazine here, a cheap scope there.

Police slowly rolled by the corner of Pryor Street and University Drive every five or 10 minutes, warily observing. The cops, many of whom have been calling in sick, are effectively on strike.

“We are being killed, and nothing is being done about it. When a person is shooting at you, that’s a declaration of war,” the man with the rifle said. “We shouldn’t have to do this.” He would not give his name.

People are shooting at them — likely white counterprotesters, shooting from their cars. And they’re shooting back. If activists allow such militance to continue, it will likely drive the broader public into a call for police intervention and discredit the movement toward systemic reform.

The previous afternoon, protesters in tech-heavy midtown Atlanta had shut down a traffic intersection when a white guy with a “Back the Blue” license plate took issue. After retrieving an AR-15 from his trunk, Alexander Fawaz barreled through a protester blocking his way. A video shows demonstrators drawing their guns and shooting at him as he drives away. Police said that Fawaz told them he feared for his life. Police did not even cite the driver. One protester was arrested and charged with disorderly conduct.

Later that day, a 24-year-old woman was shot in the leg on the street outside the crowded vigil. She appears to have been caught in crossfire. No suspect was identified. People aren’t talking to the police.

Then, earlier Saturday night a second person got shot in a drive-by there. The 35-year-old male victim was also shot in the leg.

The man with the rifle guarding the barricade said he had seen that latest shooting, just hours before. He’s a network engineer who claimed no law enforcement or military experience. The victim had been a regular at the protest, and the shooter was a white man driving a silver Dodge SRT Challenger, he said.

“The police were here when the guy got shot,” he told me. “They saw the guy get shot. They saw the car that was shooting at us, and they didn’t pursue him. … This is in the midst of a felony. Someone got shot, you know what I’m saying, and they come and say ‘Is everybody OK?’ and no, motherfucker, that guy shot at us. So, I went home and got my rifle.”

On June 12, Atlanta Police Officer Garrett Rolfe shot Brooks three times in the back as Brooks ran away. Brooks was carrying Rolfe’s Taser after a scuffle and appears in video to be pointing it at the two pursuing cops when he was shot.

Five days later, the Fulton County district attorney, Paul Howard Jr., charged Rolfe with murder. That evening police began refusing to answer calls. Starting around 7 p.m., police radio went stretches of half an hour at a time without an officer responding. Dispatchers pleaded for help. Police have been calling in sick with “blue flu” ever since.

The cops have a point: Either a Taser is a lethal weapon, or it’s not. You can’t have it both ways.

If a Taser is a lethal weapon, then the previous charges against six officers of using lethal force against two college students driving past curfew three weeks ago are legitimate. It also means police officers should not be discharging Tasers at people who present a nonlethal threat. And it means that Rolfe was justified in shooting Brooks.

As it stands, officers widely believe that Howard is making decisions about charges based on whatever will result in the most punishment for police using force, and that he is doing so because it’s the only path he has to reelection given allegations of his own misconduct. Howard came in second in the June primary to his former deputy district attorney, Fani Willis; the runoff is scheduled for August 11.

On June 17, a memo from Major Kelley Collier circulated, telling officers to refrain from “proactive” policing. “I thought this message was already pushed out to everyone,” it reads. “If not, effective immediately, we will operate as police officers and will respond when violence occurs in an officer’s presence and will respond to victims of violence. We will not be overly proactive in any shape, form or fashion. We are concerned about keeping our officers safe and healthy. We are a great department and will get through this. I appreciate all of your leadership during these trying times.”

Proactive policing, as in pursuing the perpetrator of a drive-by shooting.

The site of the Brooks shooting is in Peoplestown, a relatively poor part of Atlanta with some very long-term residents. Community leaders have met with armed people standing watch, and don’t know any of them.

“I didn’t see anybody that I know,” said Columbus Ward, the chair of Atlanta’s neighborhood planning unit for the area. Ward is in his mid-60s; though Ward has a long and storied history of personal protest in Atlanta, the pandemic makes it dangerous for him to expose himself to a crowded protest area. “Eight of us decided to go down there and talk to them. … They said they live somewhere else.”

The neighborhood group presented a list of community demands to the city two weeks ago, among them a call for community policing and limitations on the use of force. Ward carefully distanced himself from acts of violence in protest. He also said that the people at the vigil were not acting on behalf of the community. “This is bigger than us,” he said.

A distinction should be drawn between the daylight protests, which are largely peaceful, and what I saw on Saturday, which I can only describe as chaotic and disorganized.

I did not know before I arrived that earlier that day people had smashed a car window and punched a white guy who had been driving through the area. I also didn’t know that they had been harassing and assaulting livestreamers.

At around 10 p.m., someone started shooting. I don’t know what they were shooting at. When someone then started to return fire, people took cover as best they could and others went into defensive firing positions. No one imposed command and control. There was no after-action review.

The crowd of 500 dwindled to a crowd of about 50. I walked up to a group of young men with guns that was gingerly disarming someone they didn’t know. A woman in the group angrily accused me of being with the mysterious armed man. I had introduced myself to her as a journalist earlier that evening.

She and three men confronted me when they saw a cellphone in my hand, concerned that I had taken their pictures. I had not. They demanded my phone. I wouldn’t hand over my phone to a police officer, and I wasn’t going to give it to them. When I refused, one armed man said he would kill me.

He started counting down from 10 with his hand on his pistol. At five, I said I was leaving and walked away. I was punched about a half a dozen times by at least three different people before I managed to escape. I was unarmed. I did not fight back. And I did not run. In retrospect, I’m not sure why I didn’t.

I started my career in journalism as a soldier — a combat correspondent in the U.S. Army 25 years ago — and have written about crime and policing for many years. I am not unfamiliar with violence, and it’s not the first time I’ve been punched by someone angry I was asking questions.

But this was traumatic. I haven’t had to fight off multiple attackers before, and certainly not while surrounded by armed men calling for my murder. Had I fought back, I can only assume I would have been shot. The author, George Chidi, after an encounter Saturday night with protesters.

It also illustrates the potential dangers faced by Black Lives Matter activists seeking reform, as our norms shift in light of public revulsion at how police use force. We must demand people with guns who are exercising authority to hold themselves to high standards; this is as true of street vigilantes as it is of police. We must expect them to be accountable. We expect them to adhere to the Constitution.

On the one hand, this is a group of people in a community that is experiencing extreme violence. I should be unsurprised that they are a little touchy right now. I really believed I had done enough legwork earlier in the week to be recognized, and assumed a quick look at anything I had written would demonstrate that I intended to be fair. A mistake, plainly. On the other hand, in my experience, people doing the right thing want witnesses. Attacking the press — as in three guys taking turns swinging at a reporter, without intervention — is usually a sign that they’re not on the side of the angels.

The protesters had been cordial to community members, Ward said. But when I asked him of his view of the people at the vigil, after describing this assault, he responded, “Well, what did the police say?” (I have not consulted the police, and if they are aware of the incident, they have said nothing of it.) “They shouldn’t be jumping on nobody down there. … The protesters should be your allies.”

Street justice administered by people who don’t want anyone to know who they are is not a substitute for policing. The solution we find has to uphold our shared values, like those of a free press and freedom of speech. It has to be accountable. What I saw, and experienced, is not the answer to questions raised in protest today. If all Black lives matter, that has to include Black journalists.