After Killing of 18-Year-Old Andres Guardado, LA Protesters Struggle Against the Limits of Police Reform

“The people in power remain in power. … They’ll let us protest because they know that eventually, the people will get tired of protesting.” On Sunday evening, Father’s Day, Cristóbal Guardado struggled to find words as he gave a eulogy for his son. He addressed the hundreds of protesters, who had gathered in Gardena, California, to demand justice for Andres Guardado — an 18-year-old Latino shot and killed by police outside of an auto repair shop last Thursday — in English and Spanish.

After shooting Guardado, who was working as a security guard at the shop, six times, the Los Angeles County sheriff’s deputies reportedly seized and possibly destroyed nearby security cameras and took the DVR that stores all the video footage filmed by the surveillance cameras before obtaining a warrant. Protesters marched from the site of the shooting to the Compton Sheriff’s Station with chants of “Show us the tape!” and “¡Asesinos!”

The demonstration on Sunday was organized by Unión del Barrio — a socialist organization formed in 1981 — with help from Guardado’s family and local groups, including Black Lives Matter Los Angeles. Their focus, following weeks of demonstrations sparked by the police killing of George Floyd in Minneapolis, was on justice for Guardado — and on the links between policing and capitalism and the failures of police reform.

Guardado was shot roughly a day after deputies killed Terron Boone — the half-brother of a Black man found hanged in a California park the week prior. Though Guardado’s death hasn’t generated as much national media coverage as other police killings have, it’s given new energy to the movement against police violence in Southern California, especially among Latinos. In California, Latinos make up 39 percent of the state’s population but represented 46 percent of the people killed by police between 2016 and 2018.

Ron Gochez, a member of Unión del Barrio, said the last-minute protest was meant to be a “brown and Black unity action” because the Black and Latino communities are victim to the same “police terrorism.” He added that, based on the response they’ve seen from police, there are growing calls in the organization to start practicing armed self-defense.

“We call it terrorism because terrorism by definition is when brutal force and violence is used against a population to impose an agenda of some type,” Gochez said. “That’s the role the police play in our community: They impose the status quo, the agenda of the rich.”

Near the end of the protest against police violence, sheriff’s deputies clad in riot gear responded by firing rubber bullets and pepper-spray bombs to disperse the peaceful crowd.

Guardado, the son of immigrants who came to the U.S. from El Salvador, was working two jobs as a security guard and studying to be a mechanic at Los Angeles Trade-Technical College. He was killed near the Freeway Body Shop, where he was working that night. According to the Los Angeles County Sheriff’s Department, Guardado “produced” a gun, looked toward the deputies, and began running away from the front of the auto shop. Officials have not clarified what they mean by “produced,” but have said they don’t believe the gun was fired at any point. During a Saturday press conference, Capt. Kent Wegener of the homicide bureau said that Guardado was not wearing a gun belt or marked uniform and that “the .40 caliber semiautomatic pistol he was carrying was not licensed.” He was also under 21, the required age to be an armed security guard in the state of California.

The manager of the auto shop, Andrew Haney, and members of Guardado’s family dispute the claim that Andres Guardado was armed. They insist that the gun the LASD recovered is not his, describing him as a young man who had “no history of trouble” and said he simply ran from the police because he was scared. Haney said the department took security footage from his shop before obtaining a warrant and in a video captured by Memo Torres of LA Taco, pointed at spots where cameras were broken off the walls.

Andrés Kwon, policy counsel and senior organizer at the American Civil Liberties Union of Southern California, said the police killing of Guardado is “incredibly disturbing,” and reports of the officers’ seizing cameras could amount to destruction or hampering with evidence; it is not only against protocol, he said, but “potentially criminal and illegal.” He noted that the sheriff’s department has a long history of withholding records related to killings and other misconduct. Los Angeles County Sheriff Alex Villanueva, Kwon said, is “out of control, unhinged, and truly thinks he’s above the law.”

When asked about allegations that the officers destroyed evidence at the scene, the LASD responded with a link to its Saturday press conference, adding that “there is no additional information available at this time.” In the press conference, officials said they “seized” six or seven nearby cameras to search for memory cards. They claimed that none of the cameras had memory cards and the DVR they took wasn’t connected to anything, so they currently have no video footage from that night.

“It’s great to protest and march, but if the very next day we go back to watching novelas and Lakers games, everything stays the same.”

Law enforcement officials have refused to explain what exactly led to the shooting or directly address the allegation that they destroyed evidence — infuriating the community. The officers involved were also not wearing body cameras, as the program’s implementation has been stalled and debated for years. On Tuesday, the LASD placed a “security hold” on a coroner’s autopsy, meaning that the results won’t be released until the hold is lifted. Family members believe Guardado was shot in the back.

Unión del Barrio, which was formed in 1981, is a socialist organization dedicated to promoting “the strategy, science, and structures necessary to reverse the oppression” of the Mexican and Latin American people in the United States. They have members in a number of California cities, including Los Angeles, San Diego, Oxnard, Riverside, and San Jose, along with members in El Paso, Texas; Phoenix; and New York City.

Gochez said that one difference between the group’s political organizing and some of the recent uprisings against police brutality in other cities is that its movement is calling for “community self-defense,” invoking groups like the Black Panthers and Brown Berets, the influential organization that emerged during the Chicano civil rights movement.

“It’s great to protest and march, but if the very next day we go back to watching novelas and Lakers games, everything stays the same,” he said. “The people in power remain in power and they understand. They’ll let us protest because they know that eventually the people will get tired of protesting. So we’re calling for the community to organize themselves in a way that we can actually defend our communities.” 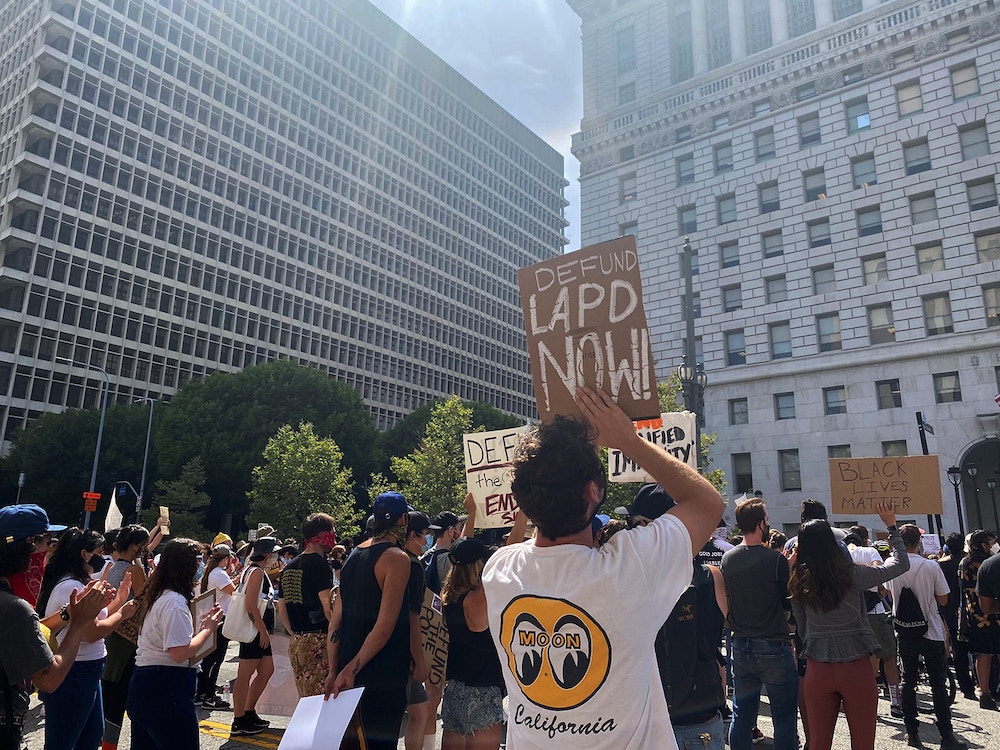 Protesters in front of the Hall of Justice in Downtown Los Angeles to listen to Celina and Jonathan Abarca, both cousins of Guardado, demand justice on June 24, 2020

Demands for an independent investigation into the shooting and death of Guardado are growing. California Reps. Nanette Barragán and Maxine Waters earlier this week called on Attorney General Xavier Becerra to conduct an investigation into the shooting. “Far too often, young Brown and Black men are caught up in a ‘shoot first, ask questions later’ scenario with police officers,” the Democratic lawmakers said in a joint statement. “We will not stand for it whether it is in Atlanta, or like this case, in South Los Angeles.”

Kwon said that the sheriff’s department is not cooperating with the Office of Inspector General, and this case calls for the attorney general — “who not only has the power but the duty” — to get involved. “As the chief law enforcement officer, the attorney general has a constitutional responsibility to oversee the sheriffs,” Kwon said. But there hasn’t been any indication that the attorney general would intervene in this case, and he believes that it might not happen without additional political and social pressure. Sens. Kamala Harris, who previously served as California attorney general, and Dianne Feinstein, have been noticeably silent.

Before the shooting of Guardado, the movement to defund the Los Angeles Police Department had been gaining momentum and accelerated in growth during the nationwide protests. Under pressure from activists, Mayor Eric Garcetti announced his commitment to cutting the police budget by as much as $150 million and diverting the funds to programs that better serve Black and brown communities. But his initial proposed cut would make up less than 5 percent of the department’s total costs, leaving half of the city’s budget going to policing.

The People’s Budget LA, a coalition led by Black Lives Matter LA, calls for the largest share of the total discretionary budget, roughly 45 percent, to go into what it calls “universal aid and crisis management.” About 1.64 percent would be allocated for law enforcement and policing, according to their report.

At the protest this week, hundreds of people met in front of her office across the Hall of Justice in downtown Los Angeles to listen to Celina and Jonathan Abarca, both cousins of Guardado, demand justice for their family member. “He ran because he was afraid, because what 18-year-old would not be afraid?” Celina Abarca said, choking back tears. “They shot him six times in his back.”