As the Covid-19 pandemic rages on, Trump keeps lying that the per capita death toll in the U.S. is among the lowest in the world. The opposite is true. For three months, as the number of Americans killed by Covid-19 has surged from 25,000 to over 138,000, President Donald Trump has been trying to disguise his failure to save lives by telling the same lie: that the per capita death toll in the United States, known as the mortality rate, is among the lowest in the world.

Asked about the rise of COVID-19, Pres. Trump changes the subject to Pres. Obama's handling of H1N1 as well as the 1918 flu (which he seems to believe occurred in 1917). pic.twitter.com/fb6hMImNcH

That was as blatantly untrue on Monday as it was in April, when Trump misled reporters by saying, “the United States has achieved a significant [sic] lower mortality rate than almost all other countries.” It was no more true in May, when the president said, “if you look at the death, relatively speaking, we’re at the lowest level, along with Germany.” It remained a lie in June, when he claimed, “we have a very low mortality rate, just about the best in the world.” It was still false last week, when he insisted, “we have perhaps the lowest — but among the lowest, but perhaps the lowest mortality rate, death rate, anywhere in the world,” and it remained untrue on Tuesday, when he lied that, “we have just about the lowest mortality rate.”

In fact, as data updated Friday by the Johns Hopkins Coronavirus Resource Center shows, the United States, which has lost 423 citizens per million from the pandemic so far, currently has the seventh highest mortality rate in the world, excluding countries with fewer than 100,000 citizens.

A table of the nations with the highest number of deaths per capita from Covid-19 through July 16.

The U.S. ranking is unchanged since April, with just six European countries — Belgium, the United Kingdom, Spain, Italy, Sweden and France — having suffered more deaths per capita than the U.S. Despite Trump’s repeated claims to the contrary, more than 120 countries have a lower mortality rate than the U.S., many of them dramatically lower — including Germany, South Korea, Japan, Denmark, Greece and Canada.

As the American death toll has climbed since April, and efforts to suppress transmission were all but abandoned in many parts of the country at Trump’s urging, the relative failure of his government compared to more competent ones overseas has only grown more stark. In those three months, Trump has lied to the public about the U.S. mortality rate at least 17 times, according to transcripts of his remarks on the White House website. He has also repeatedly made the false claim that his government has been as successful at keeping its citizens alive as that of Angela Merkel, the German chancellor.

“While we mourn the tragic loss of life — and you can’t mourn it any stronger than we’re mourning it,” Trump said at the start of a coronavirus task force briefing on April 18, “the United States has produced dramatically better health outcomes than any other country, with the possible exception of Germany — and I think we’re as good or better.” Later in that briefing, Trump and his coronavirus task force coordinator, Dr. Deborah Birx, discussed a bar chart which showed that the Covid-19 mortality rate at that time was indeed worse in Western Europe, although not Germany.

While Birx jumbled two terms while presenting the chart — mistakenly referring to the U.S. mortality rate shown on her table as the case-fatality rate, which is the percentage of confirmed cases that end in death — the data clearly undercut Trump’s claim to have matched Germany’s relative success. Today, Americans are nearly four times as likely to have been killed by Covid-19 as Germans. According to the updated mortality rates compiled by Johns Hopkins, on Thursday the U.S. had recorded 42.29 deaths per 100,000, compared to 10.95 in Germany.

Expressed in deaths per million, for every 423 Americans lost to Covid-19 so far, just 110 Germans have perished. What this means is that if the federal government in Washington had been as successful at keeping its citizens alive as the one in Berlin, the death toll in the U.S. would not be, as it is today, 138,753 but 35,959.

In other words, more than 100,000 Americans who have died of Covid-19 this year would still be alive today had Trump managed the pandemic as well as Merkel, the former research scientist he reportedly derided as “stupid” during a phone call between the two leaders.

There seems to be little hope that Trump will stop making this false claim any time soon, since the White House press corps seems almost allergic to telling Trump that he’s wrong, even when that’s glaringly obvious. On Monday, for instance, no one corrected the president when he said, for at least the 45th time this year, that the 1918 flu pandemic took place in 1917.

Rather than correcting the president, Trump’s White House staff has started to manufacture evidence to make it look like his lie about the U.S. mortality rate is true. Last week, Alyssa Farah, the White House director of strategic communications, tweeted that “the good news” about a massive increase in confirmed Covid-19 cases in the U.S. was that “our mortality rate is going down.” But what Farah described as proof of a declining mortality rate was actually a graph showing something else — a drop in the case-fatality rate, which is a measure not of per capita deaths from the disease, but of the ratio between deaths and confirmed cases.

The U.S. is testing at a higher rate than ever before. We've completed more than 40 Million COVID tests. We are catching more asymptomatics than ever before. As cases increase, the good news, is our mortality rate is going down. pic.twitter.com/euGs0ftBsm

Even if, as seems likely, Farah failed to consult any of the doctors on the White House coronavirus task force before posting this graph, it is clear that she should have known that the case-fatality rate for Covid-19 is different from the mortality rate. That’s because the original version of the graph, on the University of Oxford’s Our World in Data website, included clear language warning that case-fatality and mortality are not the same.

Before Farah posted the White House version of the graph on Twitter she, or another Trump aide, deleted this sentence from its description: “During an outbreak of a pandemic the CFR is a poor measure of the mortality risk of the disease.” A graph created by researchers at the University of Oxford before it was edited by the White House.

To make matters worse, as the Oxford researchers explain in detail elsewhere on their site, because the actual numbers of Americans infected with Covid-19 remains unknown — with about 90 percent of the population untested — and because it can take up to 8 weeks for people who are infected with the virus to die from it, the current ratio between deaths and confirmed cases is not, as Farah seemed to suggest, an accurate measure of how deadly the disease is.

“There is a straightforward question that most people would like answered. If someone is infected with Covid-19, how likely is that person to die?” the Oxford researchers Hannah Ritchie and Max Roser wrote. “The key point is that the ‘case fatality rate,’ the most commonly discussed measure of the risk of dying, is not the answer to the question, for two reasons. One, it relies on the number of confirmed cases, and many cases are not confirmed; and two, it relies on the total number of deaths, and with Covid-19, some people who are sick and will die soon have not yet died.”

Yet, at a White House briefing last week, when Trump’s press secretary, Kayleigh McEnany, showed reporters the graph of the declining case-fatality rate in the United States Farah tweeted, she called it proof that America’s Covid-19 mortality rate had gone down and that Americans were now more likely to survive the illness because of “the great work of this administration with therapeutics.” Asked on Monday about Dr. Anthony Fauci’s frank admission that, “when you compare us to other countries, I don’t think you can say we’re doing great; I mean, we’re just not,” McEnany again misrepresented the declining case-fatality rate, speaking of it as a sign that the disease was getting less lethal in the U.S. “When you compare us to other countries on case-fatality rate, other industrialized nations, we’re very low and beating most countries, if not all, in Europe,” she said.

To the uninformed, the misleading graph shared by Farah and McEnany might also look like proof of Trump’s claim that the United States was doing an even better job at keeping people alive than Germany, since the U.S. case-fatality rate had dipped below the German one that day. But, in fact, had the White House dared to present the truth to reporters, a graph of the actual per capita mortality rate on that day would have showed that Americans are dying from Covid-19 at an ever increasing rate compared to Germans, and the U.S. is on track to soon surpass France as the nation with the sixth-worst mortality rate in the world. 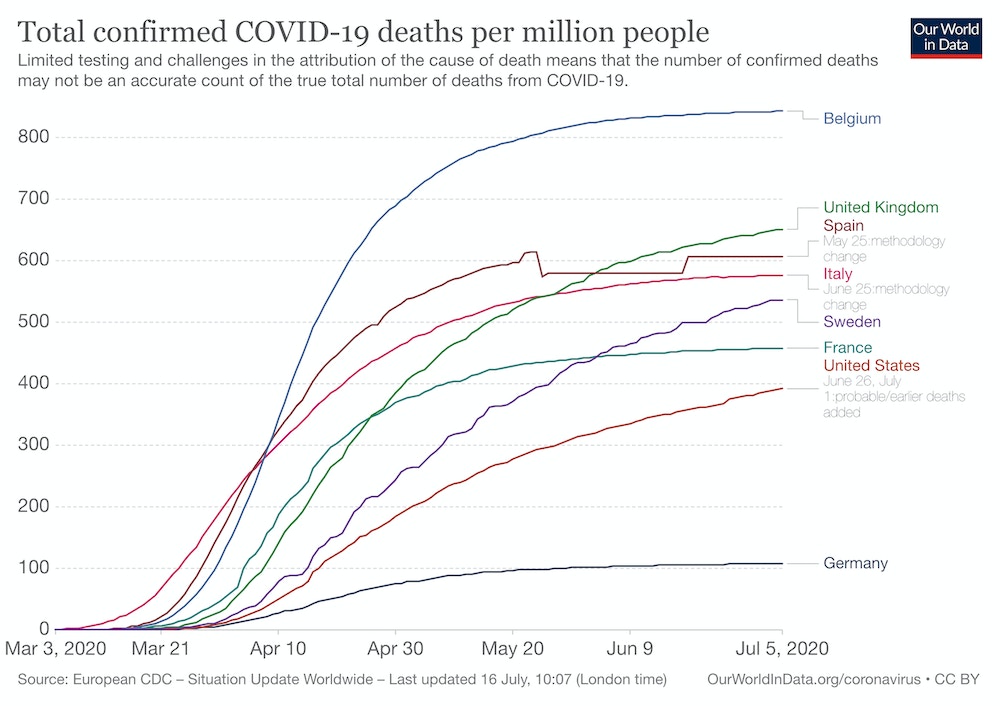 The per capita mortality rate for Covid-19 in the 7 worst countries on July 5, as compared to Germany.