Reality Winner’s lawyers had argued that the NSA whistleblower should serve out her sentence at home because she has preexisting medical conditions. 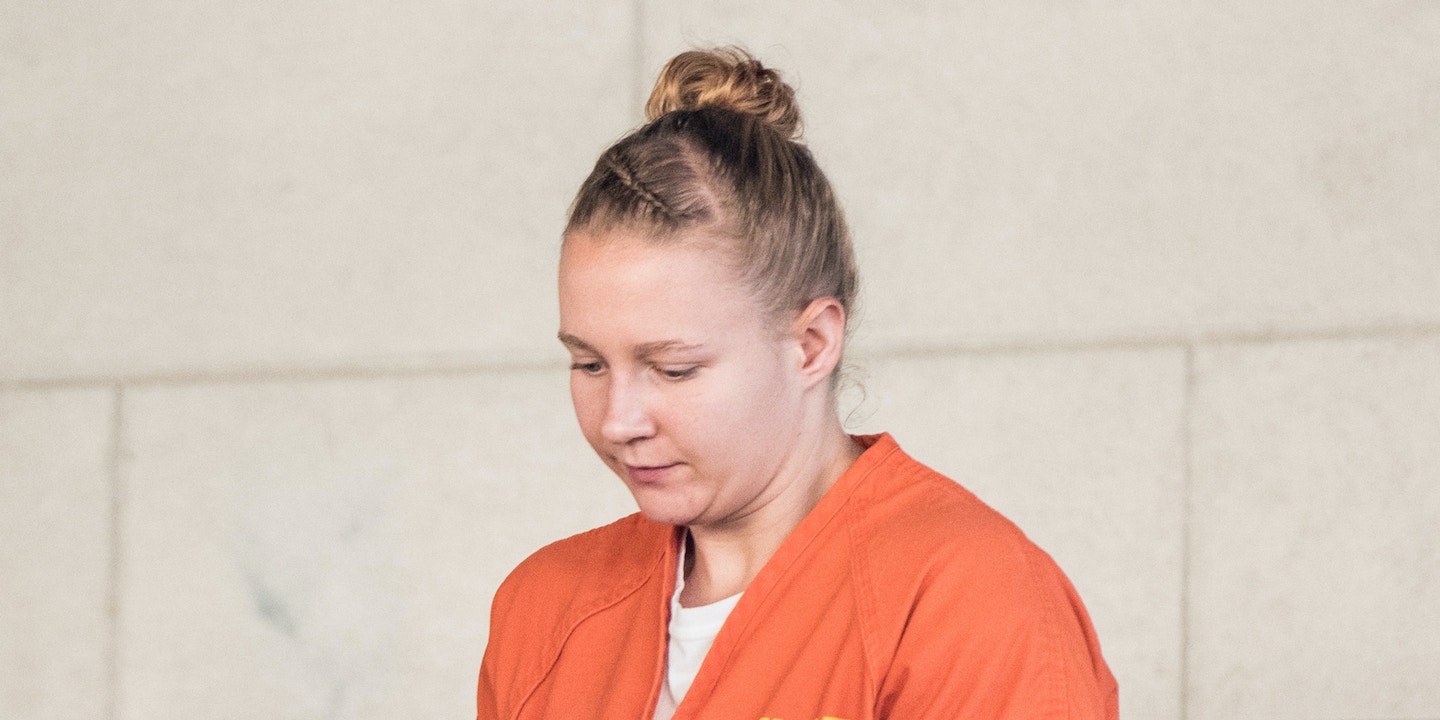 National Security Agency whistleblower Reality Winner tested positive for coronavirus in the prison in Fort Worth, Texas, where she is serving a record sentence for sharing information about a national security risk with the media, according to her sister Brittany Winner.

On Monday morning, Brittany Winner tweeted that her sister Reality had emailed from prison to say that she tested positive for Covid-19 and that she is facing retaliation for recent media coverage of the alarming surge in the number of people with the disease in her prison, including a bunkmate.

“Officially Covid-19 positive,” Reality Winner wrote, according to the tweet. “I am being retaliated against harshly for articles last week.”

“Officially Covid-19 positive. I am being retaliated against harshly for articles last week.”

In the email, which Winner sent to her family and her sister shared with The Intercept, she also said she is being singled out for harsh treatment, including making remarks about her positive coronavirus test. “ALSO, the guard CONGRATULATED her for testing positive,” Brittany Winner wrote on Twitter.

Brittany Winner said the diagnosis only reinforced the urgency to get Reality out of prison.

“My sister Reality Winner has filed for clemency to no avail, has applied for compassionate release and been denied, and is now still waiting for an ‘expedited’ response to her appeal for compassionate release. But she can’t afford to wait any longer, especially now that she’s officially COVID-19 positive,” Brittany Winner told The Intercept in an emailed statement. “If she starts manifesting severe symptoms of COVID, we have no confidence that she will be adequately cared for or even seen by a doctor at FMC Carswell because the cases at the unit have exploded in recent days.”

Reality Winner’s infection comes after her family and legal team have spent months pleading for courts to grant her compassionate release during the pandemic, allowing her to finish out the short amount of time that remains in her sentence safely at her family’s remote southern Texas home. Her attorneys had warned in a previous filing that a coronavirus outbreak at the prison “threatens to turn her 63-month sentence into a death sentence.”

That legal battle for release during the pandemic is in addition to a clemency petition filed in February by her defense team, which argued that “our national healing process cannot begin until we forgive our truth tellers.”

In response to questions from The Intercept regarding Winner’s case and allegation of retaliation, a Bureau of Prisons spokesperson said in an e-mailed statement that it cannot discuss the conditions of a specific person’s confinement, but that “allegations of misconduct are thoroughly investigated and appropriate action is taken if such allegations are proven true.”

Back in April, before the major outbreak in Winner’s prison, Randal Hall, chief judge of the Southern District of Georgia in Augusta, declined to hear her bid for compassionate release. He wrote that her prison, a federal medical center for women with chronic health issues, would be “presumably better equipped than most to deal with any onset of COVID-19 in its inmates.” Just four days after he issued his denial, the prison reported its first death of an incarcerated pregnant woman with the virus.

Winner’s infection appears to be a part of an extraordinary spike in confirmed cases in her prison. On its website that tracks Covid-19 infections in its facilities, the Bureau of Prisons had reported 200 cases amongst people incarcerated at FMC Carswell around noon on Monday. By Monday evening, that number had more than doubled to 509. The Intercept emailed and called the Bureau of Prisons seeking an explanation regarding the surge in cases. The bureau confirmed the number and offered generic information about its coronavirus tracking and policies, including that testing resources have become more available in federal prisons, but did not elaborate on how the surge happened at FMC Carswell.

Winner’s legal team has argued that her underlying medical conditions, including her Air Force-era diagnosis of bulimia, make her more susceptible to the virus. As recently as July 13, her defense team filed a motion to an Atlanta appeals court alerting them that virus cases had nearly tripled in Winner’s prison in just a week, “placing Reality in life-threatening danger with each passing day.”

Atlanta attorney Joe Whitley, who represents Winner, told The Intercept on Monday that her defense team is evaluating its next steps and still believes an appeals court should consider her application for compassionate release, particularly in light of the evolving understanding of the long-term health impacts of the coronavirus and the fact that a prison with fewer sick inmates would be safer for the staff and incarcerated people who remain.

The government attorneys who prosecuted Winner under the World War I-era Espionage Act have opposed her bid for compassionate release, arguing that it was “line jumping” for Winner to request to spend the pandemic safely at her home. The office of U.S. Attorney Bobby Christine declined to comment on Winner’s diagnosis.

Winner was widely reported to be the source for a June 2017 article published by The Intercept on an NSA document that detailed phishing attacks by Russian military intelligence on local U.S. election officials. The Intercept received the document anonymously, and its parent company, First Look Media, contributed to Winner’s legal fund through the Press Freedom Defense Fund after learning of her arrest.

“It angers me that our judicial system is so prejudiced against those without money or connections.”

Billie Winner-Davis, the whistleblower’s mother, told The Intercept in a statement that she is “devastated and terrified” by her daughter’s infection. “It angers me that our judicial system is so prejudiced against those without money or connections,” Winner-Davis said, a reference to politically connected defendants who have avoided prison during the pandemic, such as Roger Stone, a confidante of President Donald Trump, and former Trump campaign chair Paul Manafort.

Lockdown measures in FMC Carswell since the start of the pandemic have strictly limited prisoners’ access to the outdoors and fresh air, Winner-Davis said, despite growing evidence that the virus can linger in confined indoor spaces and that the risk of transmission outdoors is lower.

“I so desperately want this nightmare to end for her,” Winner-Davis told The Intercept.

Even now that the whistleblower has contracted the virus — a risk her advocates and legal team spent months trying to avoid — her sister, Brittany, told The Intercept they will “never stop fighting” to get her out of prison. She added, “Reality belongs at home where she can be safely quarantined and can receive adequate medical care.”

Update: July 22, 2020
This story has been updated to include a comment from the Bureau of Prisons about Winner’s allegations of misconduct that was received after publication.