Tom Cotton Thinks Slavery Was a “Necessary” Evil. Here Are Some Others.

By calling slavery necessary, Cotton was following in the banal footsteps of apologists for all of history’s worst acts. 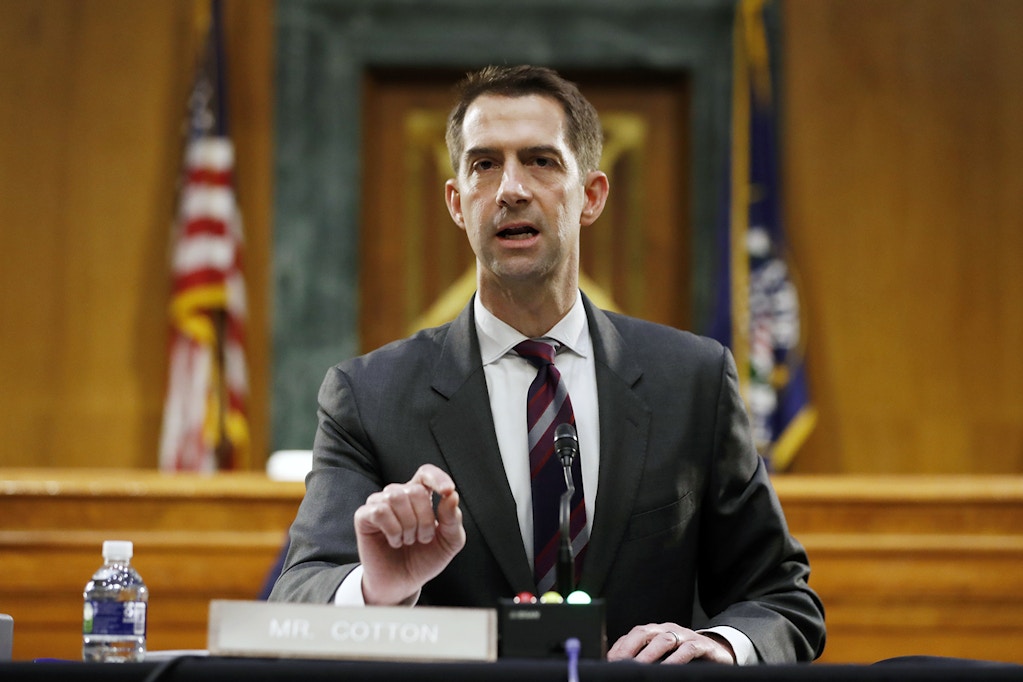 Sen. Tom Cotton speaks during a Senate Intelligence Committee nomination on May 5, 2020.

In an interview published on Sunday, Arkansas Republican Sen. Tom Cotton declared that “We have to study the history of slavery and its role and impact on the development of our country because otherwise we can’t understand our country. As the Founding Fathers said, it was the necessary evil upon which the union was built.”

What Cotton did not say is that the defenders of hideous acts almost always engage in this rhetorical tic, using that exact word: “necessary.”

• From 1986 to 1989, Saddam Hussein’s government conducted what it called the “Anfal” campaign against Kurdish Iraqi citizens in northern Iraq. In addition to firing squads and mass conventional bombings, the Iraqi military used mustard and nerve gas against civilians. Perhaps 150,000 people were murdered.

The Anfal campaign has been recognized by the British, Norwegian, and Swedish governments as genocide, and it was one of the crimes for which Saddam Hussein stood trial in 2006.

Before Hussein’s execution, he was interrogated by FBI agent George Piro, who showed him documentary evidence of his crimes, including famous photographs of victims of the Anfal campaign. This is what Piro later said on “60 Minutes” about Hussein’s perspective on Anfal:

SCOTT PELLEY: Did you show him pictures from the Anfal campaign, those terrible, terrible pictures?

GEORGE PIRO: Yes, I did.

PELLEY: And his reaction?

• Beginning in 1915, the Ottoman Empire killed about 1.5 million ethnic Armenians. At that time, the Ottoman Empire was governed by the so-called Young Turks and their associated party, the Committee of Union and Progress. Just before the killing began, a key figure in the impending genocide named Nazim Bey delivered a speech at a CUP meeting. “It is absolutely necessary to eliminate the Armenian people in its entirety,” he explained. “It is necessary that not even one single Armenian survive this annihilation.”

• Joseph Goebbels, Nazi Germany’s minister of propaganda, delivered his most famous speech in February 1943, as the Holocaust was well underway. “Enemy nations may raise hypocritical protests against our measures against Jewry and cry crocodile tears, but that will not stop us from doing that which is necessary,” Goebbels said to wild applause. “Germany, in any event, has no intention of bowing before this threat, but rather intends to take the most radical measures, if necessary.”

Indeed, this rhetorical move is so common that British Prime Minister William Pitt the Younger said in 1783 — that is, just as the United States was being born — that “Necessity is the plea for every infringement of human freedom. It is the argument of tyrants.”

Pitt was probably referencing “Paradise Lost” by John Milton, published 100 years before. In it, Satan himself explains that in order to conquer a new world, it was necessary to do things he hated:

“Should I at your harmless innocence
Melt, as I do, yet public reason just—
Honour and empire with revenge enlarged
By conquering this new World—compels me now
To do what else, though damned, I should abhor.”
So spake the Fiend, and with necessity,
The tyrant’s plea, excused his devilish deeds.

For Cotton’s part, he’s now caught in a logical trap of his own making. In his recent interview, he was obviously endorsing the view that slavery was a “necessary evil.” However, that didn’t play well. He now is anxious to distance himself from that concept, ascribing it to America’s founders but not himself:

This is the definition of fake news.

I said that *the Founders viewed slavery as a necessary evil* and described how they put the evil institution on the path to extinction, a point frequently made by Lincoln. https://t.co/SaWTTlMO7w

The problem is that if Cotton doesn’t himself believe that slavery was a necessary evil, that means he must believe it — and therefore a core pillar of the founding of America — was simply evil.