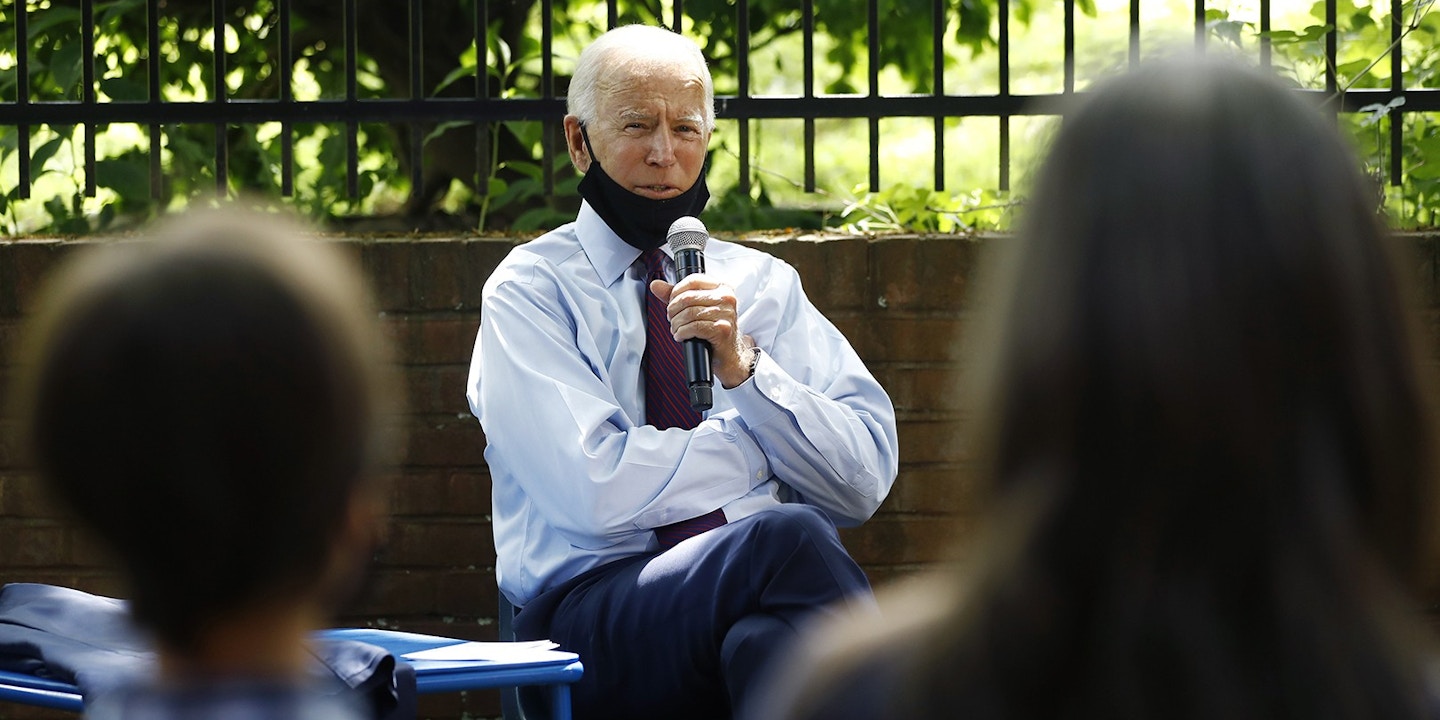 Joe Biden’s presidential campaign on Tuesday released a new agenda to address the economic inequalities Latino communities face, vowing to invest in Latinos’ economic mobility by “expanding access” to education and health care. But nowhere in the agenda, or on its website, does the campaign mention one of the biggest promises it made during the primary: a 100-day moratorium on any deportations of immigrants already in the United States.

Throughout most of the primary season, Biden refused to answer for the Obama-era immigration policies that helped build the deportation machine continued by President Donald Trump — and on several different occasions, he has defended deportation policies. After sustained pressure from immigration activists and a competitive primary, Biden changed his position on the issue, supporting an absolute moratorium on deportations of anyone in the country for his first 100 days in office. He first made the promise in a CNN town hall before the Nevada caucuses, which his campaign initially denied and then reversed on hours later. The former vice president reiterated his commitment to the policy as recently as March 15 at a Democratic primary debate with Sen. Bernie Sanders but hasn’t mentioned it on the national stage since.

When asked whether Biden still supports a deportation moratorium, campaign spokesperson Andrew Bates said in a statement that it “absolutely remains his position” and “will not change at any point.” The campaign did not respond to a follow-up question asking why the policy isn’t included in the immigration section of Biden’s platform on the campaign website or his Latino agenda.

The platform comes as the Biden campaign makes a last-minute pivot to win over Latino voters, poised to be the largest nonwhite eligible voting bloc in 2020. Although immigration isn’t the only issue that matters to most Latino voters, Obama’s legacy as the “deporter-in-chief” complicates Biden’s efforts to build trust. When immigration rights activist Carlos Rojas confronted Biden about these deportations at an event last year, the former vice president told him to “vote for Trump” instead. It wasn’t until the lead-up to the Nevada caucuses, the first real test of a candidate’s Latino support, that Biden expressed regret over the Obama-era policies, saying they made a “big mistake” in deporting hundreds of thousands of people without a criminal record.

“I think Democrats have often been afraid to talk about immigration and they have conceded a lot of space for the Republican Party to define immigrants as criminals and to define immigration as a national security problem, and we have seen how Donald Trump has used that to attach really dangerous, racist policies,” said Ana Maria Archila, a co-executive director of the Center for Popular Democracy Action, which endorsed Biden on Thursday.

CPD Action, sister organization of the Center for Popular Democracy, is a national network of more than 50 progressive community groups advocating for pro-worker and pro-immigrant policies that had previously endorsed Sanders, citing his promise for a blanket moratorium — a position his campaign later partially walked back.

Sanders won the Latino vote in Nevada, in part, because he ran on an ambitious platform and invested in sustained outreach efforts that translated the energy to voter turnout. He also ran on what was arguably the boldest immigration platform of any Democratic presidential candidate so far, including a vow to dismantle U.S. Immigration and Customs Enforcement as well as Customs and Border Protection — a drastic evolution from his 2016 campaign. Since Biden clinched the nomination, progressives have hoped that he would adopt certain Sanders policies. And while the campaign initially seemed like it was shifting a bit to the left on certain issues, like climate change and education, there haven’t been meaningful concessions to the left on issues like immigration or criminal justice reform.

Archila said the fact that the deportation moratorium is not listed on the Biden campaign’s website is “concerning,” but the organization will “hold him to his word.”

“Biden has an opportunity to lean on it instead of run away from it. The fact that a commitment that is so important for us is not visible indicates to me that he’s behaving as if we were in 2008, as if we were in 2002 —  behaving on the issue of immigration as if he needed to hide it when in fact it is essential for him to lean on a vision of an inclusive country.”

Belén Sisa, activist and former Latino press secretary for the Sanders campaign, said the omission of the deportation moratorium is “disappointing” but “not surprising.” Sisa, who is also a Deferred Action for Childhood Arrivals program recipient, believes it shows a “lack of commitment,” adding that the presumptive nominee “needs to do better rather than try to please those who question our humanity.”

While Latino political leaders have long urged Democratic candidates and campaigns to not make immigration the defining issue for such a diverse electorate, Biden has also refused to support Medicare for All or free public college: two of the biggest factors behind Sen. Bernie Sanders’s historic Latino support, particularly among younger voters. A Latino Decisions poll, conducted after the Miami Democratic debate hosted by Univision, found that a majority of Latino voters supported Julián Castro’s proposal to decriminalize border crossings, as well as the pledge by candidates to cover health care for undocumented immigrants.

Biden’s struggles to appeal to the electorate stretch back to the Democratic primary, when he lost young Latino voters overwhelmingly to Sanders in several Western states. His relative weakness with Latinos continues to trouble his campaign. Though recent polls show Biden holding a massive lead over President Donald Trump, he also appears to be doing worse among Latino voters than Hillary Clinton did around this same stage of the race.

Biden’s support among the demographic has softened during the pandemic as well, a Latino Decisions poll found, dropping to 59 percent in April from 67 percent in mid-February. As the pandemic has disrupted most in-person campaigning, the Biden campaign is unable to replicate many of the outreach strategies that helped Sanders connect with Latino voters. The danger for Biden isn’t that Latinos swing for Trump, whose ceiling with the demographic tends to be at around 30 percent — but that they won’t turn out to vote, which could hurt him in battleground states like Arizona and Pennsylvania. An estimated 32 million Latinos are expected to be eligible to vote in the 2020 presidential election, surpassing the number of eligible Black voters for the first time.

Last month, the Sanders-Biden unity task force, which was set up in May to find common ground between the left and moderate wings of the party and to shore up the progressive vote, unveiled its policy recommendations in a 110-page report, including issues like climate change, criminal justice reform, and immigration. The eight-member panel’s recommendations fleshed out aspects of Biden’s immigration policy, and in a few areas went further than what he has proposed. But the task force fell short of endorsing many of the policies Sanders supported in the primary, including calls to abolish ICE. One of the suggestions reiterated Biden’s previous promise to enact a moratorium on deportations of people already in the U.S.

During a recent interview hosted by the National Association of Hispanic Journalists and the National Association of Black Journalists, Biden also promised that “not another foot of wall would be constructed” along the southern U.S. border if he were to win the presidency, and that land confiscations for the purpose of erecting a border wall would end completely. Though he added that he would not tear down Trump’s additions to the barrier, Biden previously signaled openness to allowing Trump to extend the wall as part of an immigration deal that would protect DACA recipients.