Homeland Security Wants to Erase Its History of Misconduct

U.S. Customs and Border Protection wants to destroy thousands of complaint records it claims have no historical value. Agencies under the Department of Homeland Security have been accused of performing forced hysterectomies on detained immigrants, deporting witnesses to systemic sexual abuse in immigration detention, and defying federal court orders to halt deportations. They have separated children from their families at the border, used the Covid-19 pandemic as justification to turn them back altogether, killed people on both sides of the border, and abducted protesters against police violence from the streets of an American city.

As The Intercept has reported, U.S. Customs and Border Protection and U.S. Immigration and Customs Enforcement, two of DHS’s most abuse-ridden agencies, have long resisted public scrutiny of their record by stonewalling calls for transparency and defying demands for accountability, including by Congress. But a full accounting of DHS agencies’ misconduct may be impossible not just in real time but well into the future. The Border Patrol has petitioned the National Archives and Records Administration to designate thousands of its internal records documenting abuse as “temporary,” slating them for destruction in as early as four years. A similar request by ICE was granted last year.

When unidentified federal agents later determined to be Border Patrol agents dragged protesters into unmarked vans in Portland, Oregon, this summer, U.S. citizens got a rare glimpse of the impunity with which the agency treats migrants and their advocates on the border. With 44,000 agents and a budget of $17 billion, CBP is the largest law enforcement agency in the United States. It has also long been one of its most lawless — with a long history of corruption, neglect, racism, violence, and sexual abuse.

The Border Patrol’s proposal to the National Archives, which makes decisions about the retention of U.S. government documents, would designate as temporary all records regarding CBP’s dealings with DHS’s Office for Civil Rights and Civil Liberties: a recipient of complaints of civil rights abuses from across the department. These records include reports on concluded investigations, sworn witness statements, and transcripts of interviews — material that constitutes invaluable testimony of CBP’s conduct. The proposal would also mark as temporary internal records concerning administrative and criminal investigations of CBP agents, as well as records collected by CBP in connection to the Prison Rape Elimination Act, or PREA. Designating these records as temporary would then allow the agency to schedule their destruction — in as little as four years for the complaints of civil rights violations, and in 25 years for the remaining records.

“It’s a pretty striking proposal: It would erase a lot of historical memory of CBP abuses that are very systemic in the agency,” Jesse Franzblau, a senior policy analyst at the National Immigrant Justice Center, told The Intercept. “An institution that’s supposed to be in charge of preserving historical memory and historical record of agencies of the U.S. government shouldn’t be considering a proposal that would allow an agency — and particularly an agency with such dark history of abuse — to be able to destroy records that encompass really important, really critical, historical value.”

Archival records are all the more important in the case of agencies, like DHS, known to delay and deny public records request and to skirt legislators’ questions during officials hearings. “There’s this broader transparency issue of highly secretive agencies using different tricks and tactics to try to shield their agency from accountability,” said Franzblau. “This is another avenue that the agency is taking to try to shield themselves from accountability and try to erase this important history.”

The CBP records designation proposal notes that documents can only be destroyed after a case is closed. But the vast majority of misconduct allegations are closed without ever being investigated. In 2017, for instance, the American Immigration Council found that CBP took “no action” against agents accused of misconduct in 95.9 percent of the incidents for which it received complaints. The proposal would only impact CBP’s own records of civil rights complaints — not any copies held by DHS’s Office for Civil Rights and Civil Liberties, which have their own retention schedule. But as The Intercept has reported, the handling of misconduct allegations at DHS is riddled with inconsistencies, and many complaints filed with individual agencies accused of misconduct never make it out of the agency itself. DHS’s Office of Inspector General, which is tasked with independently reviewing the department’s various agencies, also has a poor record of investigating misconduct.

Dozens of immigrant rights and government accountability groups, as well as a number of academics, have condemned CBP’s proposal and called on the National Archives to reject it. “An agency rife with abuse should not be allowed to purge its own paper trail of wrongdoing,” the American Civil Liberties Union wrote in a statement. “CBP misconduct often only becomes public via leaks, investigative reporting, or lawsuits, meaning the loss of internal records could forever bury unknown abuses.”

“Given how terrible DHS is in general, it’s obviously very important that they not be allowed to get away from any kind of oversight and transparency, much less on these misconduct and similar types of records,” Freddy Martinez, a policy analyst with the transparency group Open the Government, told The Intercept. “These records should be kept permanently.”

A spokesperson for the National Archives wrote in an email to The Intercept that the agency’s appraisal staff had recommended approval of CBP’s proposal to designate the records as temporary, but noted that scheduling destruction was a separate process currently under review. The previously approved destruction of ICE records is currently on hold, pending litigation.

“The records scheduling process involves an ongoing collaboration between NARA and the agency that drafts the schedule,” the spokesperson said. “The [CBP] schedule has not yet been approved by NARA.”

DHS did not respond to a request for comment. 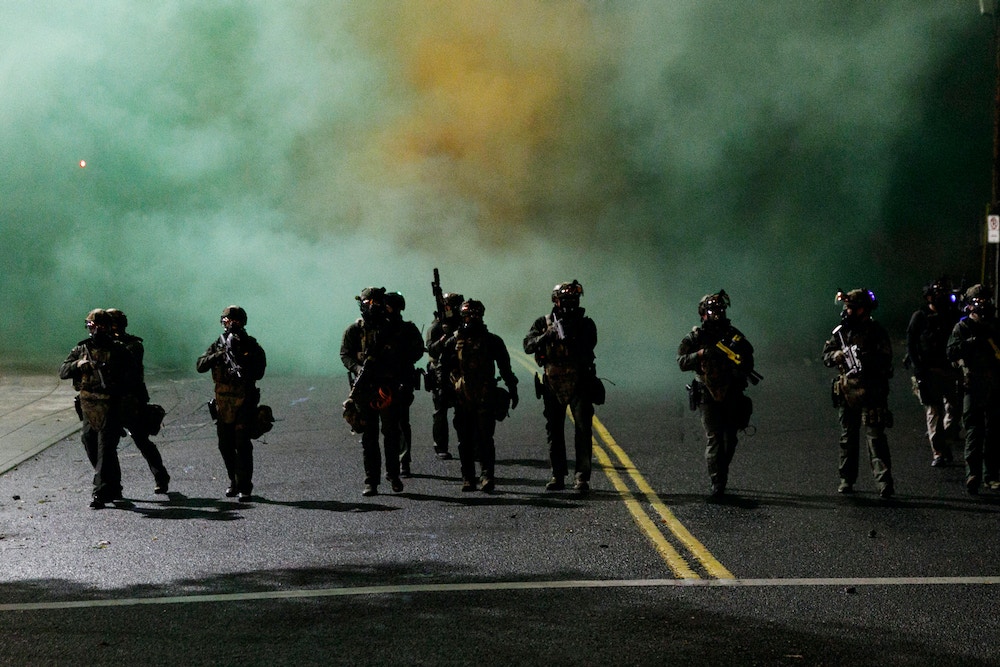 ICE and Border Patrol SWAT teams charge demonstrators in the fourth month of protests in Portland, Oregon, on September 18, 2020.

In their review of CBP’s proposal, National Archives officials referred to the designation of ICE’s abuse complaints records as temporary to justify marking CBP’s complaints records the same way. The officials argued that “these records do not have value beyond their functional use for tracking complaints and ensuring fulfillment of obligations.” Archives officials also determined that CBP’s internal investigations records, including cases of alleged corruption, mismanagement, off-duty misconduct, and misuse of government-issued weapons, “are not of significant enough historical interest to warrant preservation in the National Archives.”

But scholars who rely on these records to reconstruct the history of government agencies decades after it has taken place strongly disagree.

“These records constitute the primary source of information regarding the issue of CBP misconduct,” Yael Schacher, a senior U.S. advocate at Refugees International and author of a forthcoming book about the history of asylum in the U.S., wrote in a public comment to the National Archives. “Without them, an entire chapter of CBP history would be erased from the public record.”

Schacher pointed to the recent body of scholarly work investigating CBP’s precursor — the Immigration and Naturalization Service — as evidence of the public’s growing interest in the abuse of power and culture of impunity that has long dominated immigration enforcement in this country. “If these records are not designated permanent, it will be impossible to pursue scholarship on precisely those topics gaining increasing attention by historians of immigration,” she wrote.

“It’s no surprise that Trump officials want to destroy evidence of their own misconduct. But it’s really a shock to see the National Archives ignoring its own policies and precedents in allowing them to get away with it,” said Matthew Connelly, a history professor at Columbia University who studies government secrecy.

Connelly noted that the “mad rush” to destroy government records long preceded the Trump administration, and acknowledged that the National Archives’ resources have shrunk over the years just as the number of records they are responsible for has ballooned. But Connelly also denounced the destruction of significant government records that has taken place with no congressional scrutiny and little public debate.

“[The National Archives] has been so underfunded and undermined for so long that it is losing its capacity to protect records of obvious and enduring historical importance,” he said. “As scholars we are trying to speak out and stop them. But it’s been years since Congress has held even one hearing, and we need our representatives in Washington to start exercising real oversight.”

Under previous administrations, the CIA issued a number of records destruction proposals, shielding some of its own abuses from future review. But in recent years, there was a clear uptick in the number of records destruction requests file by DHS agencies dealing with immigration enforcement, noted Franzblau, of the National Immigrant Justice Center. “There’s just a litany of abuses that CBP officials have carried out, particularly in the last few years,” he said, who noted the documents are not only of interest to historians but also crucial for human rights investigations and legal actions. “Records relating to those incidents will be critically important in the years going forward for accountability measures, for lawsuits against these agencies, for justice for victims of these abuses.”

The CBP proposal is particularly troubling because of “the invisibility of what CBP does,” said Martinez, of Open the Government, noting that the Border Patrol’s authority stretches far from the border itself to cover an area of the country that includes two-thirds of the U.S. population.

“Most people don’t see CBP misconduct because they physically abuse people in the desert, in Arizona; they disappear people in solitary confinement for speaking out about their conditions in their facilities,” Martinez said. “It’s not like policing in a major city. Most people don’t go to the border to see what CBP does on a day-to-day basis.”