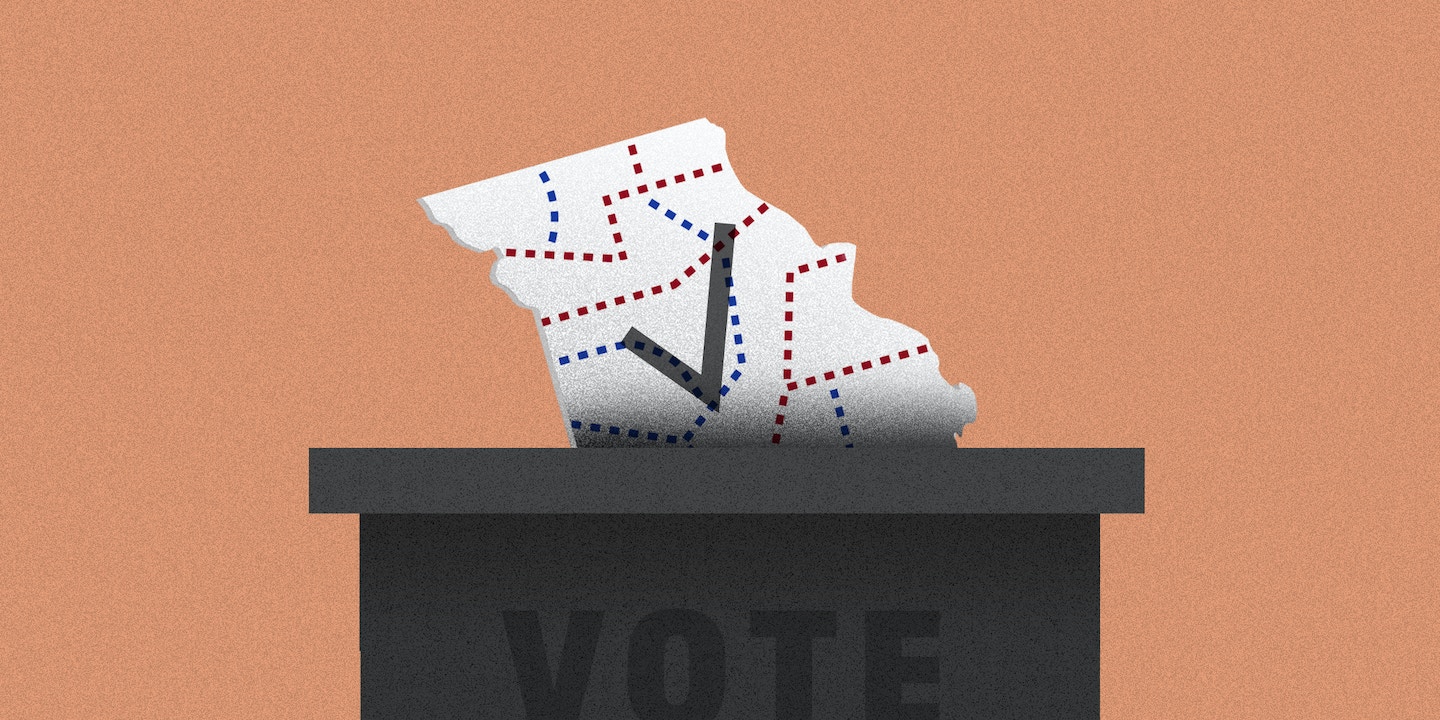 In 2018, voters in Missouri overwhelmingly approved a plan to implement new campaign finance reforms and retool the state’s districting process ahead of map redrawing in 2021. That package, known as the “Clean Missouri” plan, was cast as a shield against partisan gerrymandering and would likely put a damper on the GOP’s growing control over the state legislature. Just two years later, state Republicans are seeking to reverse it.

On Election Day, voters will decide on a Republican-backed initiative that would undo the reforms made by “Clean Missouri,” some aspects of which are already in effect and others set to take place during next year’s redistricting process.

Amendment 3 was drafted in part by Graves Garrett LLC, a firm that has represented Republicans in gerrymandering cases, including both the National Republican Redistricting Trust, and Thomas Hofeller, the architect of racial gerrymanders in states across the country, including some in Missouri. It would also introduce drastic changes to districting practices, like allowing Missouri to exclude children and noncitizens from the count. If passed, Missouri would be the first state in the nation to do so, though it’s a proposal that has been pushed by Republicans in recent years. Hofeller conducted an unpublished analysis of the impacts of districting in such a way and found that in Texas, counting only the eligible voting population would weaken Hispanic voting power and advantage “Republicans and non-Hispanic whites,” according to a trove of documents released by Hofeller’s daughter following his death. The American Legislative Exchange Council pushed the idea at its annual conference last year.

Including only the voting population during redistricting could negatively impact residents in communities of color and with large numbers of children and undocumented people, according to advocates working to defeat the new ballot measure.

Clean Missouri made it to the ballot in 2018 following a petition process with 347,000 signatures and was subsequently approved by more than 60 percent of voters. Amendment 3, meanwhile, was created and passed by the state legislature. The push for Amendment 3 has been spearheaded by Fair Missouri, a campaign committee with ties to the former chair of Missouri’s Republican Party, one of the founders of the firm involved in drafting parts of the amendment. Its supporters include the Missouri Farm Bureau and the Northwest Missouri Conservatives PAC, a group formed in August and run by a College Republicans chapter president. They argue that Amendment 3 would stop gerrymandering, preserve voting power in rural communities, protect minority populations, and maintain and strengthen ethics reforms approved in 2018.

Amendment 3’s supporters, led by Fair Missouri, have spent just under $250,000 in support of their efforts — far less than the $7 million spent by Clean Missouri this cycle, which spent about $5.5 million in 2018. Fair Missouri argues that Clean Missouri does not reflect the will of Missouri voters because it has received a lot of money from out of state, but according to an analysis from Sludge, Fair Missouri has not received contributions from any Missouri residents and is funded by a web of GOP dark-money groups with ties to state Republicans.

Clean Missouri is backed by some 350 political leaders and organizations around the state, said Sean Soendker Nicholson, Clean Missouri’s campaign director, who filed the initiative’s original petition in late 2016. “Voters don’t like the idea of politicians trying to undo what they just did,” said Nicholson.

Backers of Clean Missouri say they’re fighting a longstanding gerrymander that has decreased the level of competition in Missouri elections. Republicans have held a trifecta in Missouri since 2017, when former Republican Gov. Eric Greitens took office. Greitens resigned in 2018 amid investigations into allegations of sexual assault, blackmail, and improper campaign finance, and was replaced by former Lt. Gov. Mike Parsons. Parsons will face Democrat Nicole Galloway, Missouri’s state auditor, in next week’s election.

A coalition of 16 organizations, including the American Civil Liberties Union, the Brennan Center, Common Cause, the Center for Popular Democracy, and Color of Change, wrote an open letter earlier this month calling on voters to reject the ballot measure. “Amendment 3 is an attempt by self-interested politicians to gut popular voter-approved nonpartisan redistricting reforms,” they wrote, “and then replace them with an unprecedented, discriminatory redistricting system unlike anything Missouri — or America — has ever seen.”

The 2018 “Clean Missouri” initiative introduced new campaign finance regulations, eliminated lobbyists gifts worth more than $5, required that lawmakers wait two years before becoming lobbyists, enhanced transparency in the state legislature by opening the body to the state’s public records laws, and established a new process for drawing district maps headed by a nonpartisan demographer. That year, 62 percent of Missouri voters approved the ballot measure, even in a majority of heavily Republican counties. It passed in every state Senate district, more than 90 percent of state House districts, and in 70 percent of the state’s counties, as well as the city of St. Louis, according to the coalition of national civil rights groups fighting the new amendment.

Amendment 3 would eliminate the nonpartisan demographer position outlined in the Clean Missouri plan and make negligible changes to campaign finance contribution limits. The amendment would lower the limit on contributions for state Senate candidates by $100, from $2,500 to $2,400, and lower the limit on gifts from lobbyists to legislators from $5 to $0. It would change the order of priority for redistricting criteria, making partisan fairness and competitiveness last. It could also cause local government entities to lose revenue, according to the summary that appears on the ballot.

The language of the amendment that will appear on ballots has been hotly contested, with a circuit judge saying that the summary submitted by the GOP-controlled legislature was “misleading, unfair, and insufficient,” and failed to notify Missourians that adopting Amendment 3 would undo the 2018 vote. After a series of appeals, it was decided that the ballot text would, among other things, explicitly say that the state constitution would be amended to “Change the redistricting process voters approved in 2018 by: (i) transferring responsibility for drawing state legislative districts from the Nonpartisan State Demographer to Governor-appointed bipartisan commissions; (ii) modifying and reordering the redistricting criteria.”

“The politicians, the lobbyists who put this together know that it won’t stand on its own, their policy. And so they’ve got some tricks. Like they’re trying to fool voters into passing this thing,” Nicholson said. “When voters go to vote, the first two bullets they’ll see are intended to make it look like this is a reform package. But what we’ve been able to find as we talk to voters is that that attempt at deception is actually one of the primary reasons people are so angry about this.”

The amendment text specifies that districts would be drawn on the basis of “one person, one vote.” Republican backers of Amendment 3 have said they understood that phrase to mean that districts should be drawn based on voting population, as opposed to total population. During floor debate on the amendment in January, sponsor Republican state Sen. Dan Hegeman said that the measure’s intended purpose was to count only eligible voters in drawing legislative maps. “We’re looking at the people that vote. The people that are able to vote are the people that are counted. Not registered voters, but the opportunity to do that,” Hegeman said.

Civil rights groups say the amendment, if passed, would leave the state vulnerable to a barrage of lawsuits for excluding nonvoting-eligible people from the count. “Amendment 3 appears to be the vanguard of a broader conservative strategy to exclude children and noncitizens from being counted,” the Brennan Center wrote in a September analysis of the GOP proposal. “But should those behind Amendment 3 succeed in transforming who counts when districts are drawn, the effects on the state, and on Black, Latino, and Asian communities in particular, would be profound.”

Lobbyists and political operatives started working to upend Clean Missouri before vote tallies were finalized, said Yurij Rudensky, Brennan Center counsel and co-author of the analysis. “Voters sidestepped the law-making process to reclaim redistricting and make it voter-centric and people-centric,” he said. “And lawmakers who want to maintain their ability to draw political districts and have political forces guide that process just wanted to undermine the reforms.”

The state Senate districts that would be most impacted by a shift to adult apportionment “also contain neighborhoods that have been the target of state-sponsored segregation and racist disinvestment,” the report continues. And districts that would shrink should the amendment pass would receive less government funding based on the exclusion of children and noncitizens. Such a shift “would, at least in effect, perpetuate an ugly history of discrimination against communities of color in Missouri,” according to the analysis.

The original package would artificially break up and gerrymander rural communities in pursuit of partisan aims, said Eric Bohl, MOFB director of public affairs and advocacy. Members had concerns beyond the redistricting plans, he explained, including having only one appointed bureaucrat in charge of drawing legislative maps. He blamed Clean Missouri’s passage on “radical advocacy groups” that pushed it using “ethics candy,” he said, to distract from what they were actually doing, which was pushing for partisan control of the state.

The state’s old process, in place since 1940, wasn’t inherently biased, he added, noting that the system produced supermajorities for both Democrats and Republicans over time. “It’s just that right now, the way that the electorate leans is pretty conservative in the state of Missouri,” Bohl said. “So this looks to us more like one side of the political aisle just is not liking the fact that they’re not winning elections.”

“If it really was as huge of a mandate for that type of redistricting as the opponents of Amendment 3 claim, then I guess maybe they’ll see that show up at the polls,” Bohl said.

Missourians have already started casting absentee and mail-in ballots, and some people said they were confused by the amendment language and regretted voting for it, the Northwest Missourian reported. Still, Nicholson believes that there is sufficient energy around the issue to defeat Amendment 3 next Tuesday. “When I first started working on this, I had no idea that anyone cared about redistricting reform other than us in Missouri,” he said. It took two years to get the original measure on the 2018 ballot and collect more than twice the amount of signatures necessary. “We won because it was really good policy.”