The latest nuclear assassination in Iran could stand as another example of Israel strong-arming its most important patron. 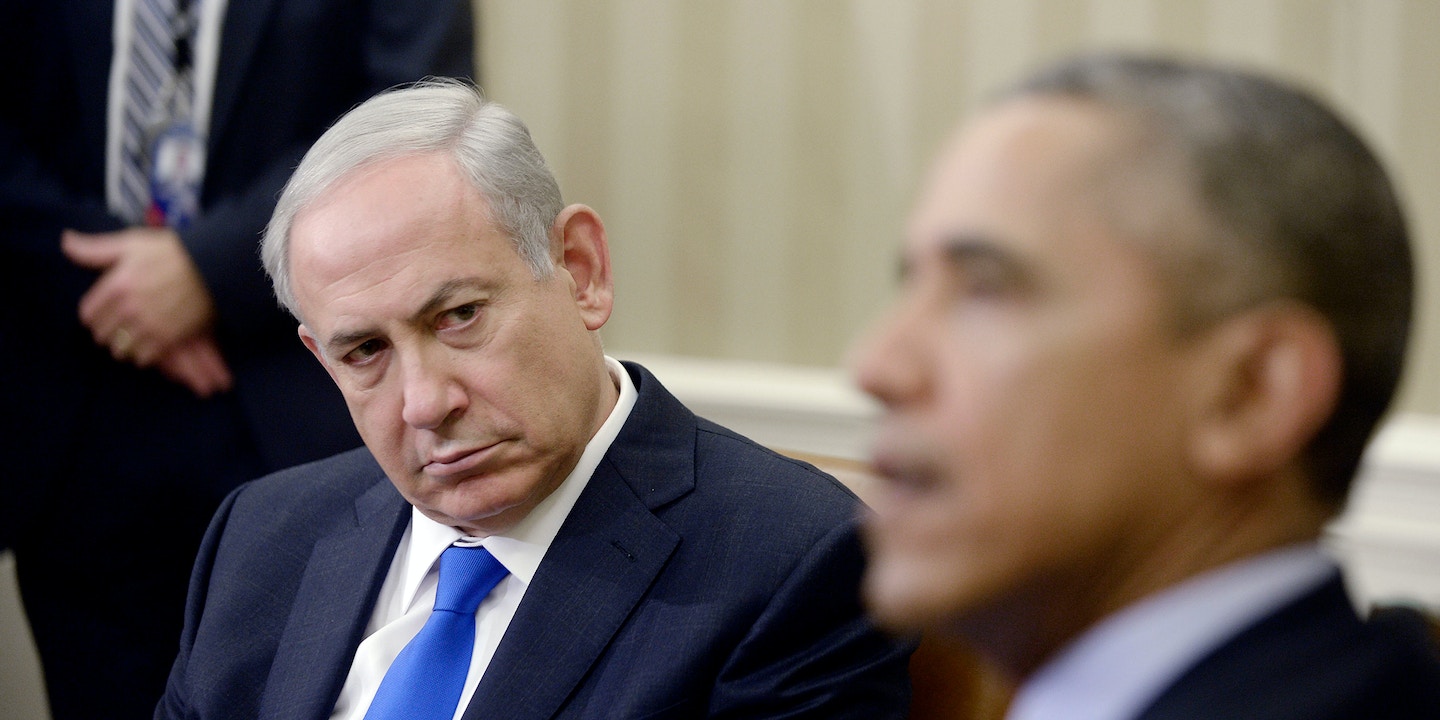 The assassination of Iranian nuclear scientist Mohsen Fakhrizadeh, likely carried out by Israel with possible U.S. support, is another sledgehammer blow against a legacy project of former President Barack Obama: the Iran nuclear deal. In 2018, President Donald Trump withdrew from the deal, which was signed by Iran, on one side, and the U.S., four other permanent members of the United Nations Security Council, and Germany, as part of a broader campaign to undo Obama’s achievements in office.

With an incoming Biden administration, chatter about the U.S. rejoining the deal had ramped up. Many commentators are openly speculating that the likely Israel attack against Fakhrizadeh was designed to hamstring President-elect Joe Biden and scuttle any possibility that the deal could be salvaged.

If the deal can be revived at all, it will in a severely curtailed form at best. Full-blown war between the U.S. and Iran was averted by mere meters in January, following an Iranian missile strike responding to the U.S. assassination of Gen. Qassim Suleimani. A lasting detente between Iran and the United States, sought by the Obama administration to avoid a future war between the two countries, now looks more remote than ever.

The Israelis, in other words, could manage to strong-arm their own patron state, the guarantor of their diplomatic security and financier of around a fifth of its defense budget. This remarkable feat would return things to the dangerous status quo before the nuclear deal and represent yet another shocking deference to Israel’s priorities by the United States. In looking to hold that old status quo at bay, the Biden administration would do well to study the history of the U.S.-Israel relationship that led up to the deal itself — particularly the version told by the deal’s ultimate architect, Obama.

The first volume of Obama’s new presidential memoir, “A Promised Land,” deals with the events of his first term in office. The nuclear deal was negotiated toward the end of his presidency and this volume doesn’t delve into those events. But the book pointedly describes the difficulties that Obama and, by his own description, any U.S. lawmaker faced in pushing through policies opposed by the Israeli government and its allied domestic lobby groups. Obama paints a stark picture of a U.S. political system that, in a limited but serious way, has been compromised by foreign influence.

Israeli Prime Minister Benjamin Netanyahu was an implacable foe of the nuclear deal, provocatively lobbying the U.S. Congress against Obama on the issue. But it took the election of Trump, a weak and pliable president whose own political career was launched by a racist grudge against his predecessor, for Netanyahu to make real progress in blowing up Obama’s keystone diplomatic achievement. In 2018, video leaked of Netanyahu boasting about coaxing Trump into pulling the U.S. out of the nuclear agreement. “We convinced the U.S. president [to exit the deal], and I had to stand up against the whole world and come out against this agreement,” Netanyahu said in the video, aired on Israel television.

Given Netanyahu’s famously bad personal relationship with Obama, these words could only pile insult onto injury. In his book, Obama forthrightly describes his frustrations with Israeli pressure on his administration, as well as the difficulties that any U.S. politician faces seeking to pursue an even-handed Middle East policy.

“By the time I took office,” Obama wrote, in a section reflecting on the troubled U.S. history of mediating the Israel-Palestine conflict, “most congressional Republicans had abandoned any pretense of caring about what happened to the Palestinians.” Religious commitments had led many white evangelical Republican voters to blindly support the Israeli government in all matters. Obama went on to say that, meanwhile, due to electoral and ideological considerations inside the Democratic Party “even stalwart progressives were loath to look less pro-Israel than Republicans.”

“Members of both parties worried about crossing the American Israel Public Affairs Committee.”

At the heart of the problem, as Obama described it, stood a nexus of pro-Israel lobbying groups and activists in D.C. that exerted pressure on his presidency at every turn, despite the fact that he considered himself “fiercely protective” of Israel and had provided it with strong economic, political, and military support. Obama didn’t seem to think that he was the only one facing this predicament. As he wrote, “members of both parties worried about crossing the American Israel Public Affairs Committee, a powerful bipartisan lobbying organization dedicated to ensuring unwavering U.S. support for Israel.”

As Israel’s own political drift to the far right has continued, Obama went on to write, AIPAC has also maintained a forceful insistence that “there should be ‘no daylight’ between the U.S. and Israeli governments, even when Israel took actions that were contrary to U.S. policy.” This created a serious dilemma for any U.S. politician trying to maintain a commitment to liberal principles, let alone tack leftward in any real way. The consequences for crossing AIPAC and other pro-Israel organizations could be dire for any U.S. politician. Obama noted candidly, “Those who criticized Israeli policy too loudly risked being tagged as ‘anti-Israel’ (and possibly anti-Semitic) and confronted with a well-funded opponent in the next election.”

Though not covered in Obama’s book, the nuclear deal has been a great example of how pro-Israel lobbying and pressure tactics can reshape U.S. politics. The Netanyahu government and its allies in D.C. fought hard during the Obama presidency to prevent a negotiated U.S. agreement with Iran. This effort was funded to the tune of tens of millions of dollars and only beaten back by Obama at considerable political cost. Since Trump took office, along with handing an endless gold rush of concessions to Israel in the occupied territories, the U.S. has completely reversed its Iran policies in accordance with Netanyahu’s wishes. The rapprochement with Iran started by Obama has been discarded in favor of a “maximum pressure” program of sanctions, assassinations, and sabotage.

A full-blown war has not started as yet, but Trump still has two more months in office. The Israelis appear to be using that time as a free-for-all to target Iran, drawing on the extensive infiltration networks they’ve set up in the country.

The Trump administration has not relented on its maximum-pressure policy even as Iran has been among the hardest hit countries by the Covid-19 pandemic. The U.S. has layered on even more sanctions during the pandemic, including those that could affect medical trade, as the disease ravaged Iranians. Leaked U.S. military evaluations say that the sanctions campaign has “left Iran bereft of financial resources to mount an effective public health response.” The official death toll in Iran from Covid-19 recently passed 40,000, though the real number could be several times higher.

“The noise orchestrated by Netanyahu had the intended effect.”

As described in “A Promised Land,” Obama was essentially bullied by Netanyahu and his supporters during his term. To his detriment, he failed to stand up effectively against this pressure. His own Jewish supporters were forced to fight back a whisper campaign against Obama’s alleged private hostility toward Israel, supposedly proven by his friendships with a few Palestinian academics and periodic expressions of sympathy for those living under Israeli occupation. Netanyahu, meanwhile, made little effort to hide his animosity toward Obama throughout his presidency, going so far as to publicly fete his presidential challenger Mitt Romney in the 2012 U.S. elections.

The effect of this campaigning against his presidency clearly stung. Now out of office, Obama has to watch Trump and Netanyahu work hand in hand to destroy what had been intended to be a signal achievement of his foreign policy. It’s hard not to imagine those observations at the forefront of Obama’s mind when he dared to commit to the page an unspoken truth about the U.S.-Israel relationship: that it is unlike dealing with any other nominal partner state.

“I’d delivered on my promise to enhance U.S.-Israel cooperation across the board,” Obama wrote in his memoir, lamenting the apparent lack of gratitude this support had gotten him. “Nevertheless, the noise orchestrated by Netanyahu had the intended effect of gobbling up our time, putting us on the defensive, and reminding me that normal policy differences with an Israeli prime minister — even one who presided over a fragile coalition government — exacted a political cost that didn’t exist when I dealt with the United Kingdom, Germany, France, Japan, Canada, or any of our other closest allies.”