While Republicans Fractured, Raphael Warnock and Jon Ossoff Teamed Up — and It Seems to Have Worked

In Tuesday’s Georgia Senate runoff elections, there was no Warnock without Ossoff, and vice versa. Jon Ossoff had mud on his shoes Saturday morning, as he walked through a dew-dampened field 15 miles east of Atlanta, in the shadow of Stone Mountain, for one more push. The muddy field is behind the home of a DeKalb County activist. A BBC crew competed for social distancing space with political science undergraduates from California, my former state representative, and the street team for Dr. Bronner’s hemp soap. Ossoff stood on a makeshift stage in front of 30 or 40 activists and the local elected throng, preaching a political sermon of sorts. He spoke of a campaign rooted in love and dignity.

Whatever else has happened over the last three months, the joint campaign with Rev. Raphael Warnock has rubbed off on both Democratic Senate candidates. The two have been joined at the hip on the campaign trail, and the results tonight are showing the effect, with Ossoff trailing closely behind Warnock in their respective races. And so far, it seems to have worked. They both needed to win for it to matter, and their campaigns reflected political reality. On Tuesday, there was no Warnock without Ossoff, and vice versa.

The contrast between their very practical, very tactical campaigns and the maddeningly dysfunctional Republican ones couldn’t have been starker. Democrats in Georgia have always presumed that the mechanisms of elections would be turned against them, and planned accordingly. Democrats assembled voter suppression strike teams and had a highly organized system for locating people whose absentee ballots had been rejected due to a signature mismatch, likely saving thousands of lost votes.

The last best example of Democrats trying to team up in Georgia would be Jason Carter running for governor against Nathan Deal and Michelle Nunn running for the Senate against David Perdue in 2014.

Their teams believed that they could pull enough white voters on a center-left platform and the strength of the legacy of their family political dynasties: Jason is the grandson of Jimmy Carter, while Michelle is the daughter of former Georgia Sen. Sam Nunn. The political math on the left at the time centered on the belief that a Democratic candidate could only win with at least 30 percent of white voter support. Neither cracked 25, losing by about 7 percentage points overall. I watched Jason Carter speak eloquently and honestly about his faith in front of large Black churches in DeKalb County, where he was serving as a state senator. But notably, communities of color underperformed for the pair relative to turnout for Barack Obama.

It was in the crucible of this loss that then-state representative and minority leader Stacey Abrams began to argue loudly for a reimagining of Democratic politics here. Black voters won’t turn out for candidates with whom they do not identify, and campaigns have to focus on their support to win enough turnout to change the math, she said.

Meanwhile, Republicans have spent much of the runoff jerking from one manufactured crisis to another. Lin Wood and white nationalists calling for a boycott of the election. Photos of Sen. Kelly Loeffler emerged with a white nationalist leader and the campaign manager of a Ku Klux Klan candidate for sheriff in north Georgia. Donald Trump did what Donald Trump does: make a mess others are forced to clean up and apologize for.

Marjorie Taylor Greene, who now represents the northwest corner of Georgia in Congress, has been spreading QAnon conspiracy theories about a stolen election since November. She’s also an anti-masker; House leaders threw her off the floor on her first day for refusing to wear a mask. These two moral maladies are connected.

Most people in Georgia voted early, one way or another: either by absentee or early voting. But early voter turnout in the heavily Republican north Georgia counties is running 5 to 10 points behind the state average; it’s why the president held a rally in Dalton. Between skepticism about the fidelity of voting machine tabulation and fear that an absentee ballot might be tampered with, it would be reasonable to conclude that the #stopthesteal rhetoric depressed voter turnout in the heart of conservative Georgia.

And, as the pandemic rages on, many north Georgia counties consolidated their polling locations as a preventative measure. Fewer polling places in counties that already have low population density may have also depressed election day turnout. 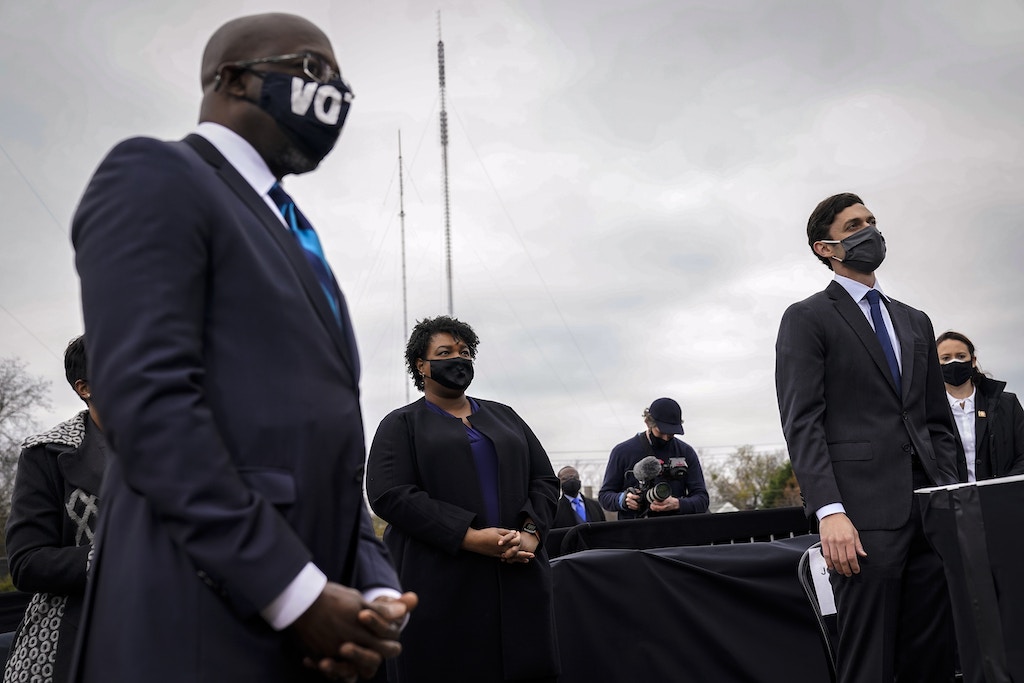 Later on the same morning, Ossoff was barnstorming through the Atlanta suburbs, and I found myself surrounded by shofars on a street corner across from the state Capitol. The “Georgia Prayer March” had descended on Atlanta. It’s worth noting that most of the folks I saw weren’t actually from Georgia.

They walked around the Capitol seven times, blowing horns like Jericho. A young man from Brooklyn, dreadlocked and hemp-fibered, explained to me in complete earnestness that America’s government is ordained by God, and if Loeffler and Perdue don’t win on Tuesday, the country will be destroyed in hellfire within a year. In the text he sent to me with his contact information, he misspelled his own name.

Let me say on behalf of all Georgians: We’re a little tired of being the center of the political universe. Go home. All of you. We love you. Get out.

It would be easy to blame the self-immolation of the Republican campaigns in Georgia on the fecklessness of the candidates, but I think what we saw were rational politicians responding to an irrational political marketplace. Loeffler, Perdue, and others seemed to behave as though they’d lose their elections unless they appeared to be out in front of the mob braying for undeserved power, or else be replaced later in a primary by someone who will at least appear nuttier than they are. Many are absolutely correct in this political assessment.

Hillary Clinton described these voters as a “basket of deplorables.” She was castigated for it. But she was absolutely correct. A voting majority of the Republican primary electorate are some combination of conspiracy-swilling white supremacists (or people with enough racial resentment to be indifferent to them), religious fundamentalists who believe the laws of the country are subordinate to their interpretation of biblical law, or kleptocrats defending their estates. That’s somewhat more than half the party.

Just before Trump held a rally Monday night in north Georgia, Loeffler announced that she too would be challenging the results of the Electoral College on the day after the election. She hadn’t been willing to commit to that publicly.

A supposition: Trump made a last-minute demand for Loeffler to challenge the vote in order to get him to appear in Dalton. He introduced uncertainty, and she caved because she is fundamentally risk-averse and doing what powerful people tell her to do has worked so far.

The same impulse made Loeffler memorize what other people told her to say in the debate. She sounded like a robot wearing a skinsuit, but that’s a feature in her world, not a bug.

If you thought that winning this election was enough, you’re not paying enough attention. Senators who said the remedy for presidential misconduct was an election are now attempting to set aside that election. They believe it is necessary to lie and cheat because the Republican base punishes anyone who will not lie or cheat in their name.

In a sane political universe, the president would have been arrested once the phone call to Georgia Secretary of State Brian Raffensperger was made public. As it stands, the just-elected district attorney of Fulton County is exploring charges. The U.S. attorney for the Northern District of Georgia, Byung J. Pak, might have considered a similar investigation — but he resigned suddenly Monday afternoon, citing “unforeseen circumstances.” Pak is a former Republican state legislator and federal prosecutor, and a Trump appointee, whom I have known for many years. I have reason to trust him implicitly, as does most of the political establishment of Georgia, left and right. Pak is widely considered the best chance in Georgia for an Asian American to win statewide office.

Trump derisively referred to him as a “Never Trumper” on the Raffensperger call.

This election will imprint itself on the political psyche of Georgia for a generation. For the first time in a long time, structures will have been built that will endure through an election cycle, given the strength of the Democratic showing. And, normally, I would expect a round of soul-searching among Republicans, an after-action review to adjust. But I doubt it this time.

Mired in conspiracy and lying to itself, the self-corrective mechanisms of politics here are broken on the right. Too few Republican political leaders here — leaders, as in people who have followers — seem prepared to be honest with the right-leaning public about what happened and how to fix it.

Meanwhile, I fear that there is no step the incoming president can take to right the ship that will seem strong enough to be satisfying, not without creating legal issues that complicate governance. The guillotine is incompatible with the rule of law. Perhaps this ending cascade of outrages is meant to make of us what has been made of them, to infect the left with the irrationality plaguing the right.