Let’s Be Honest About What Trump Wanted on January 6

A handful of Republican members of Congress stared into Medusa’s face and refused to blink. The rest looked away. 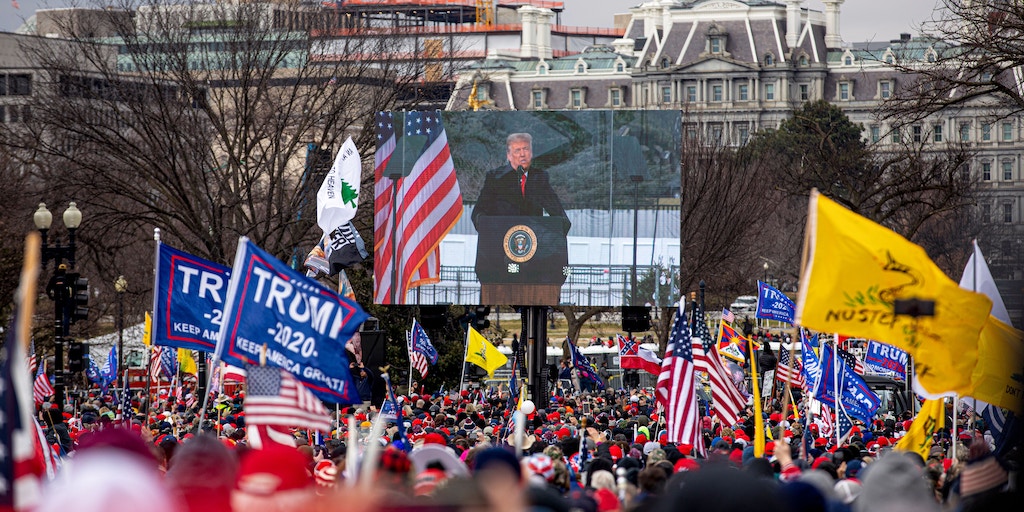 President Donald Trump speaks from a Jumbotron screen as crowds gather for the “Stop the Steal” rally in Washington, D.C., on Jan. 6, 2021.

Donald Trump heavily promoted the January 6 rally in Washington. He fired up the crowd and urged them to march on the Capitol. That much is undisputed. What’s been emerging in the past few days goes much, much further.

After Sen. Tommy Tuberville, R-Ala., told Trump that Vice President Mike Pence had been rushed out of the Senate chamber, his security in question, Trump posted to Twitter, raging at Pence’s betrayal. That’s according to Tuberville, who stands by his account even as others, including Utah Republican Sen. Mike Lee, call it into question.

“Mike Pence didn’t have the courage to do what should have been done to protect our Country and our Constitution, giving States a chance to certify a corrected set of facts, not the fraudulent or inaccurate ones which they were asked to previously certify,” Trump posted. “USA demands the truth!”

That Trump, according to Tuberville, attacked Pence publicly after learning the former vice president was under threat strongly suggests that Trump was eager to see the mob locate Pence and do what they would with him. As the New York Times has reported, Trump also told Pence earlier that day that he’d “go down in history as a pussy” if he didn’t try to flip the election to Trump. Trump clearly wanted the crowd to grab him. If you’re famous, they let you do it.

Added to that new piece of evidence are the claims of Rep. Jaime Herrera Beutler, a Washington state Republican, about her conversation with her party’s House leader, Kevin McCarthy, after McCarthy got into a shouting match with Trump. McCarthy and his staff were barricaded in an office, McCarthy told Herrera Beutler, fearing for their lives, when McCarthy pleaded with Trump to call off the mob. Trump initially denied that the mob was made up of his people. McCarthy told him he was wrong, and again demanded that he do something, anything — go on TV, post to Twitter — to call them off. “Well, Kevin, I guess these people are more upset about the election than you are,” Trump reportedly said, allowing the violence to rage on.

“I think it speaks to the former President’s mindset,” said Rep. Anthony Gonzalez, another Republican. “He was not sorry to see his unyieldingly loyal vice president or the Congress under attack by the mob he inspired. In fact, it seems he was happy about it or at the least enjoyed the scenes that were horrifying to most Americans across the country.”

“You have to look at what he did during the insurrection to confirm where his mind was at,” Herrera Beutler told CNN. “That line right there demonstrates to me that either he didn’t care, which is impeachable, because you cannot allow an attack on your soil, or he wanted it to happen and was OK with it, which makes me so angry.” Republican members of Congress are staring into Medusa’s face and refusing to blink.

We can’t look away from this simple set of facts: All the evidence points to the conclusion not just that Trump recklessly whipped up a mob that went on to storm the Capitol, but also that he wanted that mob to succeed in finding and attacking those who stood in the way of his return to the presidency. Of course, nobody can know what exactly went on inside Trump’s mind that day, but his conversation with Tuberville, the subsequent tweet, and his conversation with McCarthy point in a very dark direction. Trump supporters near the U.S Capitol erected gallows and a noose in Washington, D.C., on Jan. 6, 2021.

Was there a rational basis for Trump to believe that the insurrection could have succeeded? It’s possible to put one together: If Pence and House Speaker Nancy Pelosi had been killed or badly injured and the votes not certified, Trump could have declared some sort of state of emergency and — this is the key point — lived to fight another day.

Living to fight another day is Trump’s life philosophy. Just ahead of the 2018 midterms, Trump, at a rally, acknowledged that he might lose the House. “It could happen. Could happen,” he said. “And you know what you do? My whole life, you know what I say? ‘Don’t worry about it, I’ll just figure it out.’ Does that make sense? I’ll figure it out.”

This was Trump’s M.O. throughout his business life. Faced with what appeared to be inevitable defeat, his last resort was always to create chaos, not because it would naturally lead to success, but because it would at least reset the situation and give his incredible lucky streak another opportunity to assert itself. Trump didn’t know exactly how things would play out if the mob succeeded in its mission, but he knew how things would go if it didn’t: He would lose. And he was ready to kill to stave that off.

On Saturday, the Senate voted to subpoena testimony from witnesses, with House managers saying that they’d like to hear from Herrera Beutler, who likely knows the names of other Republicans McCarthy spoke to. Rep. Jamie Raskin, D-Md., a House impeachment manager, also said he wanted access to notes Herrera Beutler took of her conversation with McCarthy. There seemed to be no reason not to also call McCarthy, though that wasn’t discussed.

The question of whether to call witnesses had been bedeviling House managers from the beginning, and the team debated the question until past 3 a.m. Saturday morning, according to a Democrat familiar with their discussions, who wasn’t authorized to speak publicly. By the time Senate Democrats convened for a caucus meeting at 9 a.m., the House managers still hadn’t decided what they’d do, and Senate Majority Leader Chuck Schumer told his caucus to support whatever decision the House made. During the impeachment proceedings, Raskin pushed for the right to call witnesses. A vote was called, and with the support of Democrats and a handful of Republicans, the Senate approved.

Trump’s lawyer responded to this by suggesting that Pelosi be deposed in his law office in Philadelphia, which prompted a round of guffaws from the gathered senators. “I don’t know why you’re laughing here,” said Trump’s lawyer. “There’s nothing laughable here.” As ever with Trump, that’s both true and not.

In the end, there will be no depositions, in Philadelphia or anywhere else. After getting approval to call witnesses from the Senate, the managers decided not to do so after all, resting their case.

Seven Senate Republicans joined all 50 Democrats in voting to convict Trump. That was ten short of the 67 needed. Trump lives to fight another day.