How to Understand the Rage Economy 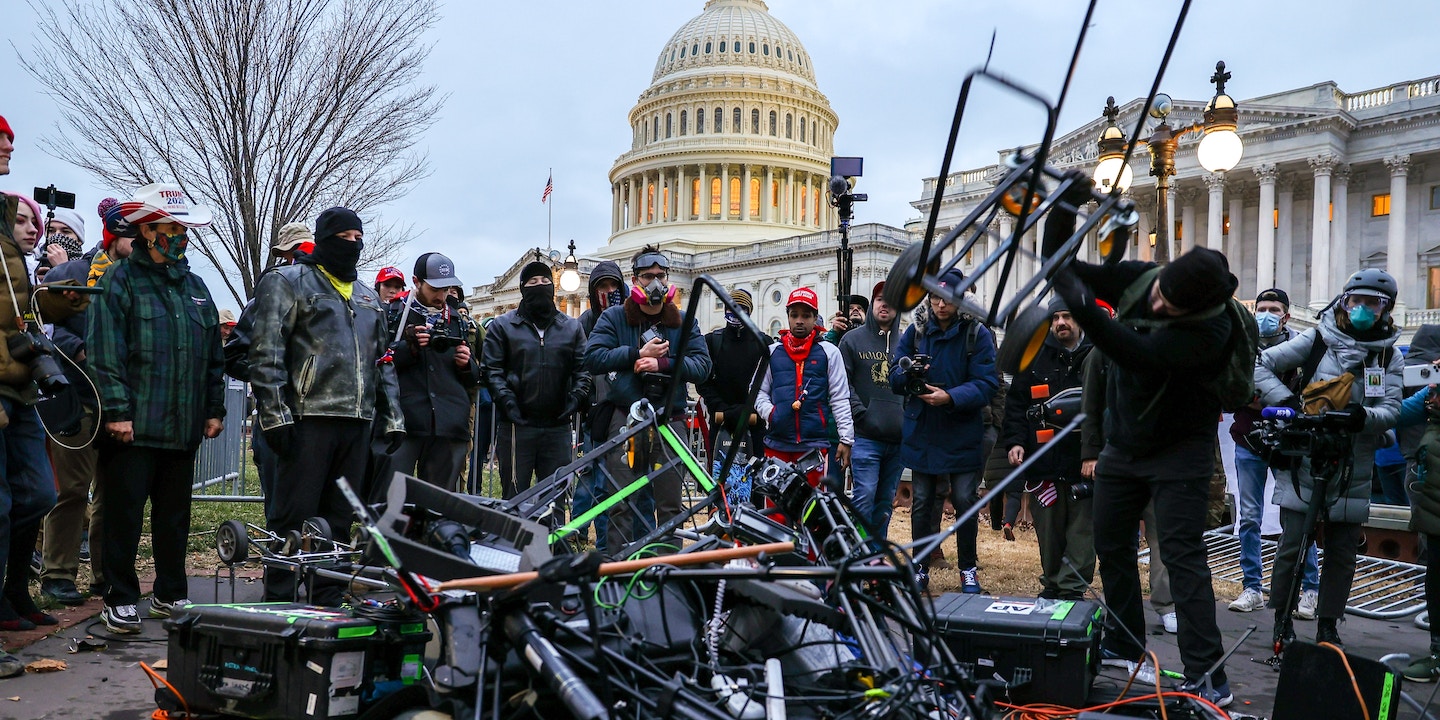 The attack on the U.S. Capitol on January 6 underlined a disturbing phenomenon that has become undeniable at this point: the fragmentation of the American public into a multitude of angry factions, radicalized in different ways online and holding completely different baseline perceptions of reality. The problem of deliberate misinformation undermining democracy has received lots of attention, but in many ways, the power of fantastic lies to grab people’s allegiance is also a byproduct of a deeper problem: extreme polarization driven by news media monetizing anger in order to survive.

This phenomenon is at the core of what media ecologist and author Andrey Mir in a new book calls “postjournalism.” Mir’s book, titled “Postjournalism and the Death of Newspapers,” is a sweeping look at how the news media evolved and shaped the world over hundreds of years, from newsletters for traders published in medieval Venice, Italy, to modern print newspapers, television, and finally the internet. For pretty much everyone, the news media is the major force that shapes how they perceive the world outside their direct experience. During an era when the main technology for producing and disseminating information changes, the world changes as well. For better or worse, we are living through one of those eras now.

The collective psychological impact of new technologies like social media has been written about in a wave of books over the past few years. Equally significant has been the underlying economic shift that has gradually transformed even traditional media outlets into something wholly different. Journalism traditionally relied on an advertising-based revenue model, and that economy also subtly incentivized a particular lens through which the world was depicted: an upbeat-as-possible, unifying worldview that made advertisers happy and promoted the needs of consumerism, even as it often overlooked or suppressed stories that fell outside its parameters.

When advertisers suddenly flocked to social media, the traditional economic model that underpinned the media and allowed even smaller papers to afford luxuries like foreign correspondents suddenly collapsed. Today established news outlets not only struggle to find advertisers after Facebook and Google swallowed up the market, but they must also compete with a seemingly infinite number of other websites, companies, and even individuals committing “acts of journalism” or just putting out entertainment, thus forcing them to battle for a finite slice of an attention economy that they cannot possibly corner.

The loss of the old advertising paradigm simply killed many local news outlets, which have shuttered at an incredible rate over the past decade. The surviving large organizations have sought desperately for a new model to support themselves. A lucky few have been able to rely on the patronage of philanthropists supporting journalism as a pure social good. But many others have been forced to do something not seen since the era of mass-produced penny tabloids: relying primarily on readers to support them through subscription and membership fees. As Mir argues, this change in the economic structure of the news media has quietly transformed what journalism itself is about, turning it from a theoretically neutral means of “manufacturing consent” into a political cause that people are rallied into supporting, usually by inciting them to some form of outrage. This change has most directly impacted print-based media, but television news outlets like Fox News that still draw a majority of their revenue from cable subscriptions also have strong incentive to capitalize on the rage economy. Facebook’s algorithmically generated news feeds meanwhile have the lucrative advantage of always knowing exactly what people want to hear and driving their engagement accordingly, something that is only now bringing the company under regulatory threat for fostering extremism.

Unfortunately for society as a whole, one of the best ways to monetize engagement on the internet is by generating rage.

This phenomenon became very stark after the election of former President Donald Trump (an event that would have been impossible in the pre-social media world in which the old media acted as gatekeepers), when his opponents rushed to subscribe to liberal-leaning outlets like the New York Times and the Washington Post in the expectation that doing so would help fight his presidency. Trump’s supporters likewise flocked to outlets that supported him in the face of what they viewed as a siege by liberal elites. Some older journalists expressed unease at the idea of explicitly taking a side even in the face of such an inherently polarizing figure, but the economic structure of their industry now made it inevitable. Any time that outlets seemingly veered from the script and upset their readers’ expectations, they were immediately threatened with losing their now-vital economic support. Even Fox News is menaced with having its ratings taken by the even-seedier One America News Network when it fails to deliver the obsequious and outrageous coverage that Trump’s partisan supporters demand.

Just as the advertising model incentivized news outlets to project a business-friendly view of the world, the new model requires readers to stay not just satisfied but also engaged enough that they are willing to maintain economic support. Unfortunately for society as a whole, one of the best ways to monetize engagement on the internet is by generating anger and hatred, usually directed at some other group of people. This rage-driven model is at the heart of what Mir calls postjournalism. In its most extreme forms, in venues where the old professional ethics and standards of journalism have been discarded or never took root, postjournalism will produce mobs whose rage is incomprehensible to those outside their bubbles, like the QAnon conspiracy theorists who sacked the Capitol.

“As postjournalism needs to amplify people’s frustration for profit, it spirals up into the amplification of extremes and, therefore, polarization. The outraged and polarized audience is a side effect of this new business model,” Mir told me in a lengthy email exchange about the book. “Seeking support from the audience in the conditions of fading attention, the news media are forced to amplify and dramatize issues whose coverage is most likely to be paid for. If the ad-driven media of the past tended to manufacture consent, the reader-driven media must manufacture anger.”

“There is no evil plot, nor ‘liberal bias’, nor ‘right-wing conspiracy’ behind this,” Mir adds. “Such are simply the environmental settings for a media industry that has lost its ad revenue and news business to the internet.” The permanently suspended Twitter account of former President Donald Trump on a smartphone in Washington, D.C., on Jan. 9, 2021.

The recognition that something has gone terribly wrong with how people consume information has led to calls for censorship or even appointing a government “reality czar.” Following the Capitol riot, there has been a wave of deplatformings of individuals from social media, extending all the way to the former president himself. But this is at best a short-term solution. Given how new conflicts constantly emerge in society, simply banning all people who believe the wrong things from using the internet is not remotely sustainable.

A return to the old hierarchical world of news media is highly unlikely, and that’s a good thing on balance. But creating a worthwhile new media landscape will require protecting news organizations from the Darwinian economic pressure that forces them to peddle outrage.

Creating a worthwhile new media landscape will require protecting news organizations from the Darwinian economic pressure that forces them to peddle outrage.

Countries such as Canada, Australia, and Norway have been rolling out programs for greater public funding of journalism. But that could be more challenging in the United States, where government-funded outlets are more at risk of political pressure. A plan circulated by Sen. Bernie Sanders in 2019 may be closer to the mark: placing a tax on targeted advertising and redistributing money from tech companies back to traditional journalism. A program like that would reduce the incentive for large outlets to lean on polarization as a business model while rescuing many local news outlets from complete oblivion.

For the average person consuming the news in a context where rage has become currency, it might help to simply be aware of that context and consume information without being manipulated. The digitalization of human interactions that has been accelerated by the coronavirus pandemic makes it more urgent than ever to deal with these platforms responsibly.

“When one sees enraged users on social media or journalists very selectively covering news in the mass media, it must be understood that these users and journalists are under the influence of the media,” Mir writes in his book. “Being subdued to the environmental force of media does not release anyone from the personal responsibility for what is done on social media or in the news media, but at least this explains that people are pushed towards more polarization and rage by the environmental settings of this particular media environment.”

The people who ransacked the Capitol are of course responsible for their own actions, and though social media technology may have helped motivate them in this particular way, Trump’s extremism and incitement drew upon deep historical fissures related to race and status. Even so, it might help for all of us to better understand the technological and economic context that gave rise to that bizarre mob, along with many other recent calamities. Mir argues that understanding the deeper influences of this new media environment can have a “therapeutic effect” in a world that otherwise “looks unexplainably insane.”